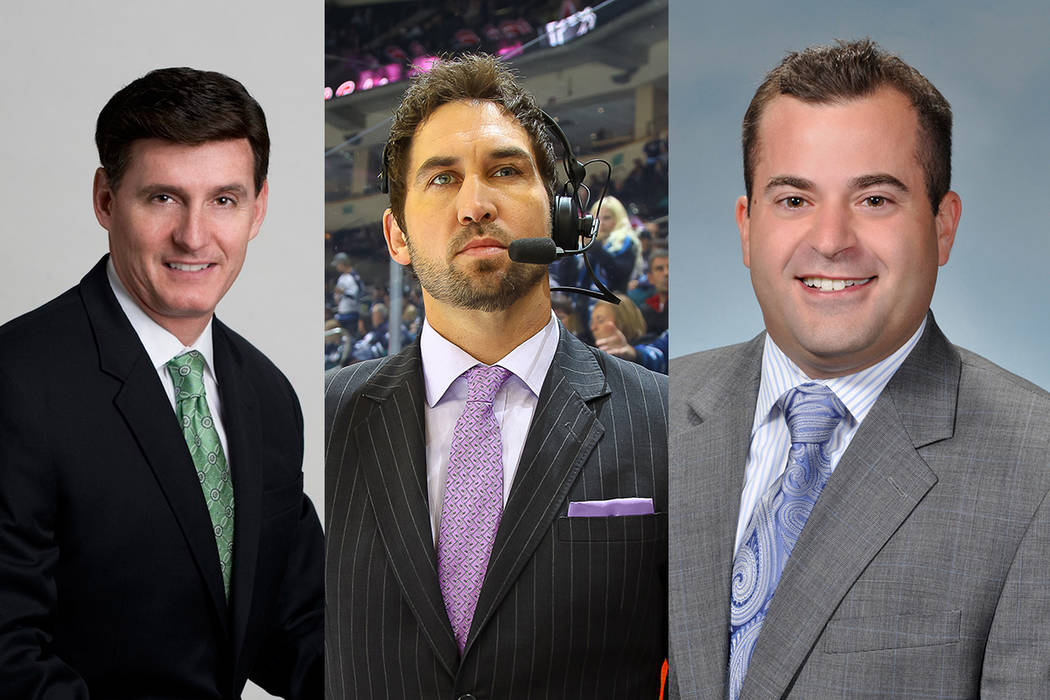 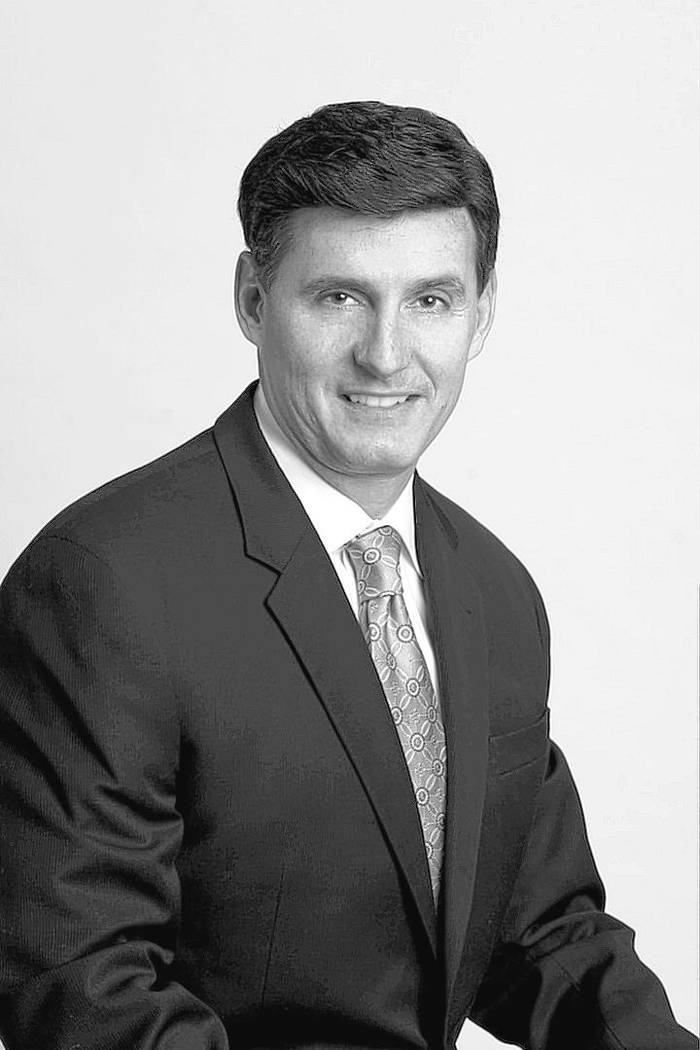 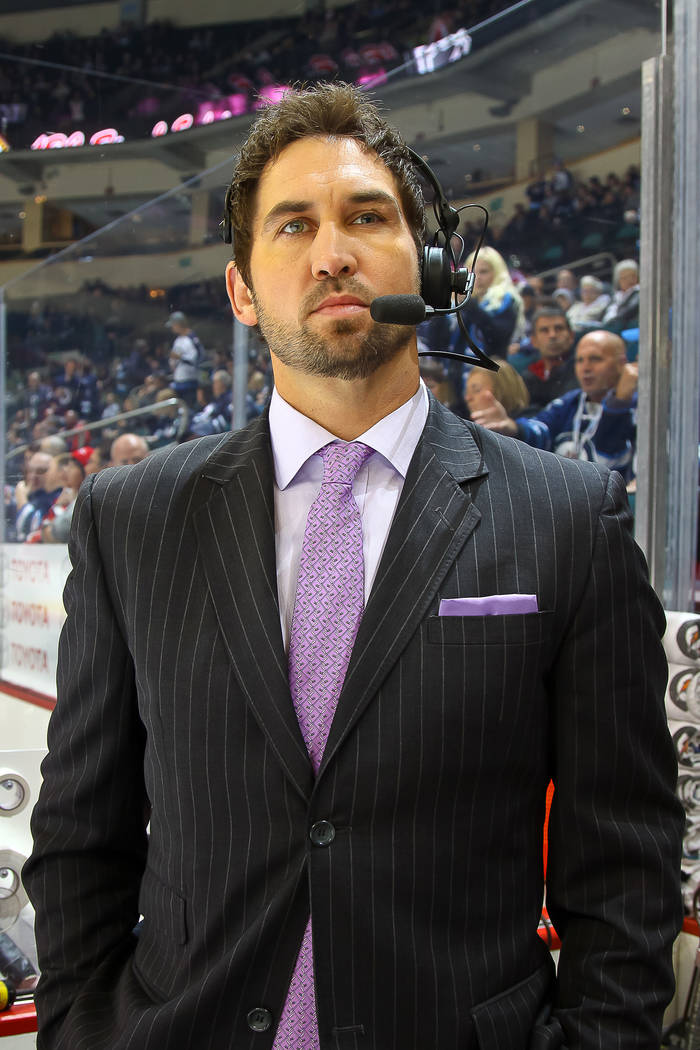 Shane Hnidy, a former defenseman who played 11 years in the NHL and has been working Winnipeg Jets games on both radio and TV since 2012, will serve as the TV analyst for the Knights games on AT&T SportsNet. (Jonathan Kozub/NHLI via Getty Images) 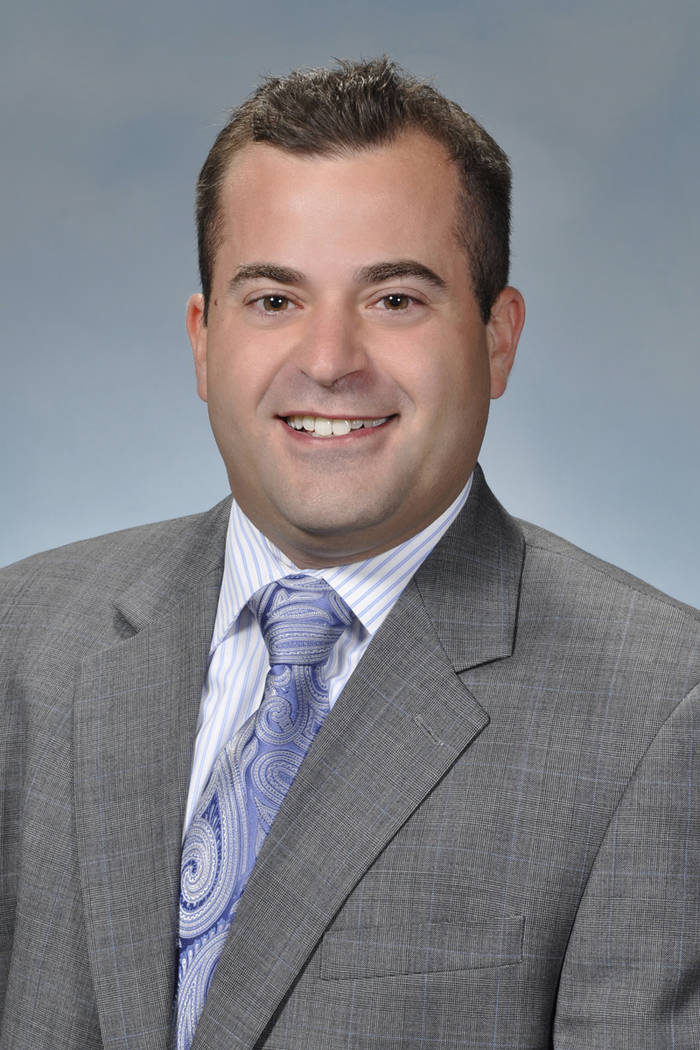 Dan D’Uva, who has been the radio voice of the American Hockey League’s Syracuse Crunch since 2012, will be the play-by-play man for the Knights’ radio broadcasts on Fox Sports Radio 1340 AM. He will work solo for the first season. (Vegas Golden Knights)

The Golden Knights are looking for youth on the ice. But when it came to the broadcast booth, they wanted experience.

The team announced Tuesday its broadcast teams for television and radio, and the selection of Dave Goucher, Shane Hnidy and Dan D’Uva represents more than 30 years of pro hockey broadcasting experience.

Goucher, who has been the Boston Bruins’ radio play-by-play voice and has also worked in television, will be the Golden Knights’ TV play-by-play man. Hnidy, a former defenseman who played 11 years in the NHL and has been working Winnipeg Jets games on both radio and TV since 2012, will serve as the TV analyst for the Knights games on AT&T SportsNet.

D’Uva, who has been the radio voice of the American Hockey League’s Syracuse Crunch since 2012, will be the play-by-play man for the Knights’ radio broadcasts on Fox Sports Radio 1340 AM. He will work solo for the first season.

The trio were chosen from among more than 200 applicants.

“It’s exciting,” said Goucher, 48, who had been with the Bruins since 2000 and called the Bruins’ Stanley Cup run in 2011. “It’s a chance for me to grow as announcer and the move to television will help grow my career.

“I’ve known Shane from his two stints with the Bruins and his knowledge of the game is tremendous. I look forward to us working together.”

Hnidy said he wants the telecasts to be fun while also being informative.

“It’s unique to get to be part something on the ground floor,” Hnidy, 41, said. “I played in Nashville and Atlanta in their first year so I know what it’s like to be in a new market. Hockey has been my life. I want to help grow the game and put the Golden Knights on the map.

“I know Dave and there’s an instant credibility and comfort level. Anytime you know the people you’re going to work with it helps.”

For the 32-year-old D’Uva, who has been broadcasting hockey since his high school days and taught broadcasting at Syracuse University, getting to the NHL is the culmination of the dream. But is also brings with it added responsibilities in trying to entertain and educate a fan base in a non-traditional hockey market.

“It’ll give me a chance to build that intimate relationship with the listener,” D’Uva said from New Jersey. “I expect us to have a fun and entertaining broadcast and hopefully the listeners will learn something every night.”

D’Uva said he understands the special relationship fans have with announcers.

“Radio is an intimate medium,” he said. “It’s about establishing a relationship with each listener.

“It’s important that I get to know the fans of Las Vegas and connect with them. If I can paint a picture that fairly, accurately and objectively tells the story of the Golden Knights, then I’ve done my job.”