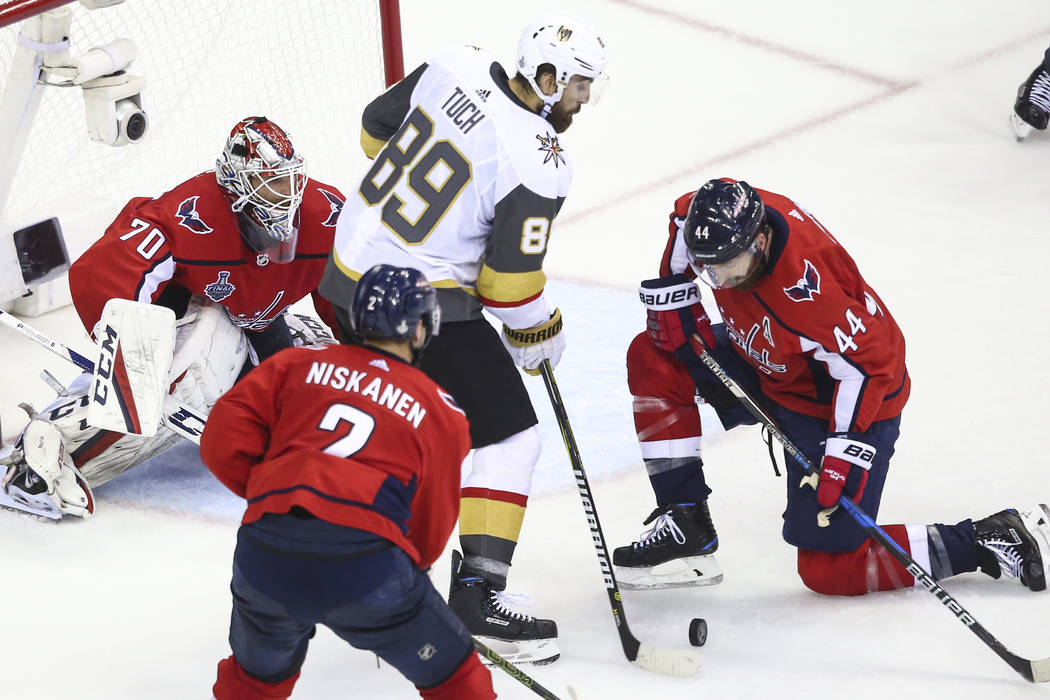 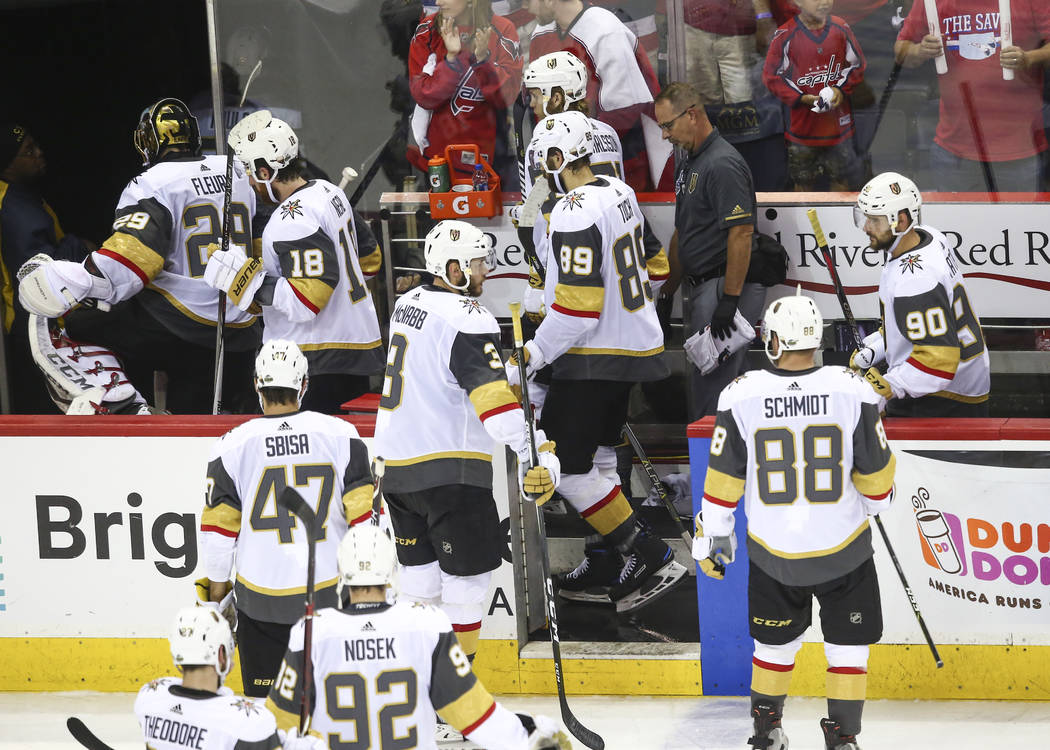 Golden Knights players head to the locker room after losing 6-2 to the Washington Capitals during the third period of Game 4 of the Stanley Cup Final at Capital One Arena in Washington on Monday, June 4, 2018. Chase Stevens Las Vegas Review-Journal @csstevensphoto 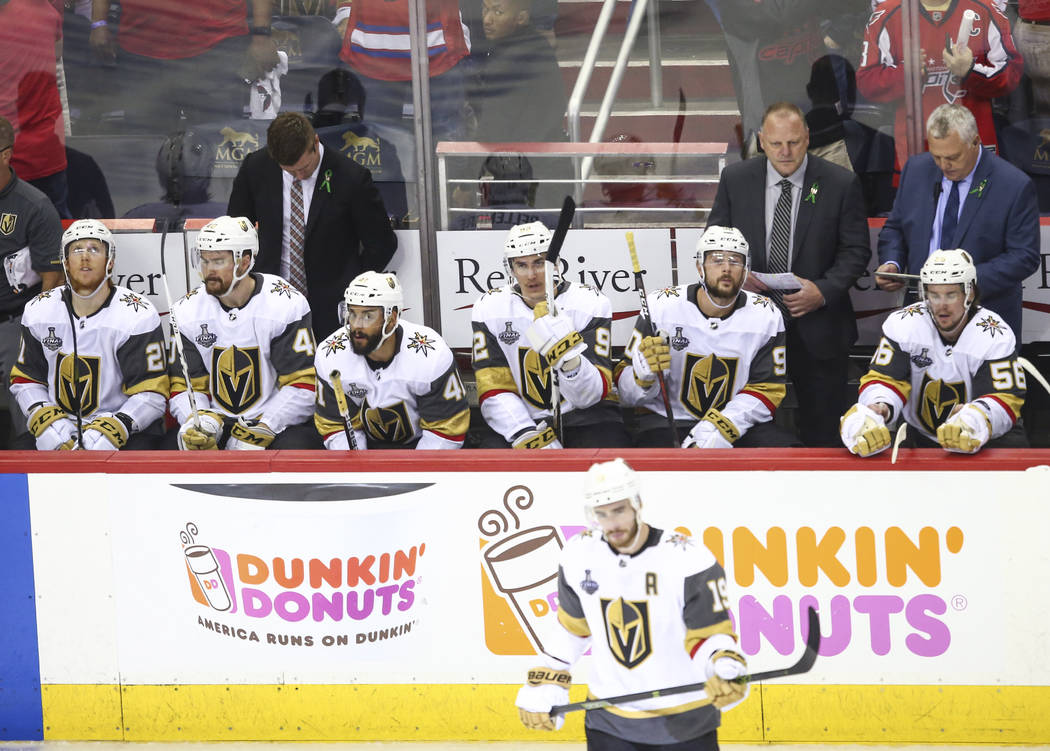 Golden Knights players react as they trail the Washington Capitals during the third period of Game 4 of the Stanley Cup Final at Capital One Arena in Washington on Monday, June 4, 2018. Chase Stevens Las Vegas Review-Journal @csstevensphoto 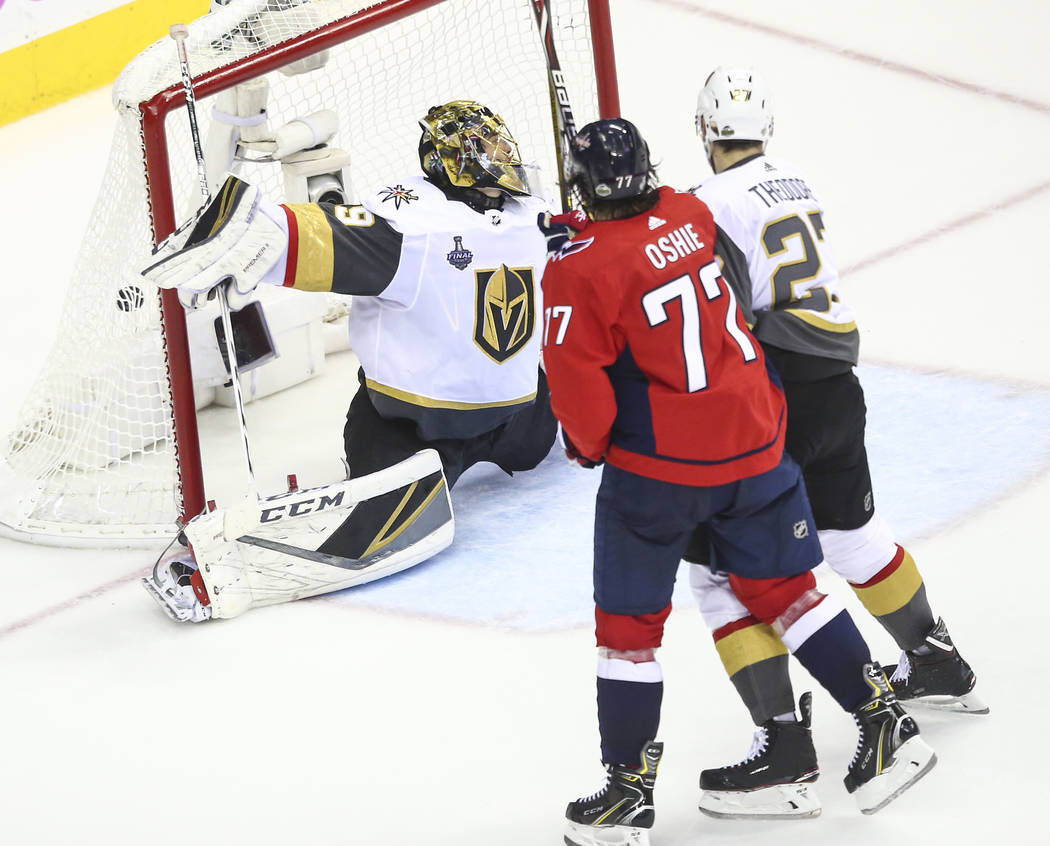 Golden Knights goaltender Marc-Andre Fleury (29) gets scored on by Washington Capitals defenseman Michal Kempny, not pictured, during the third period of Game 4 of the Stanley Cup Final at Capital One Arena in Washington on Monday, June 4, 2018. Chase Stevens Las Vegas Review-Journal @csstevensphoto 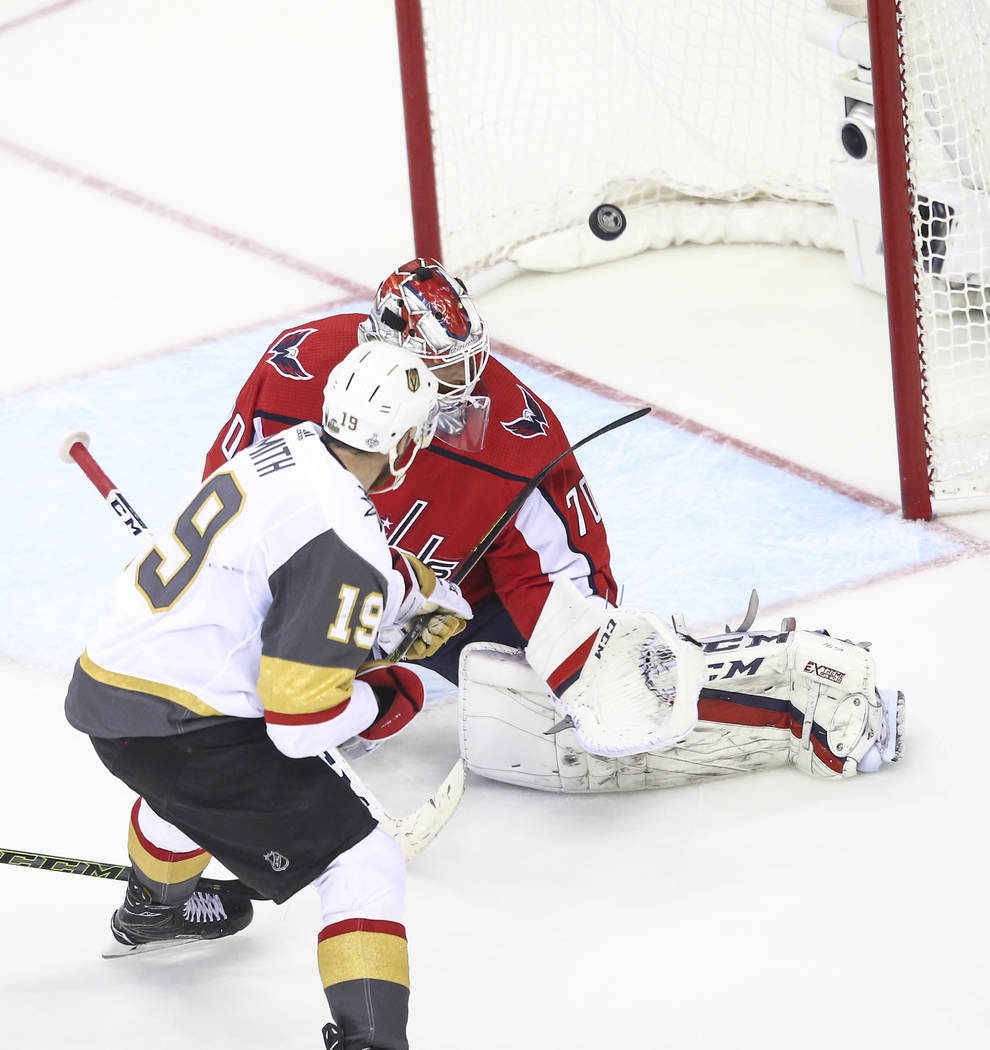 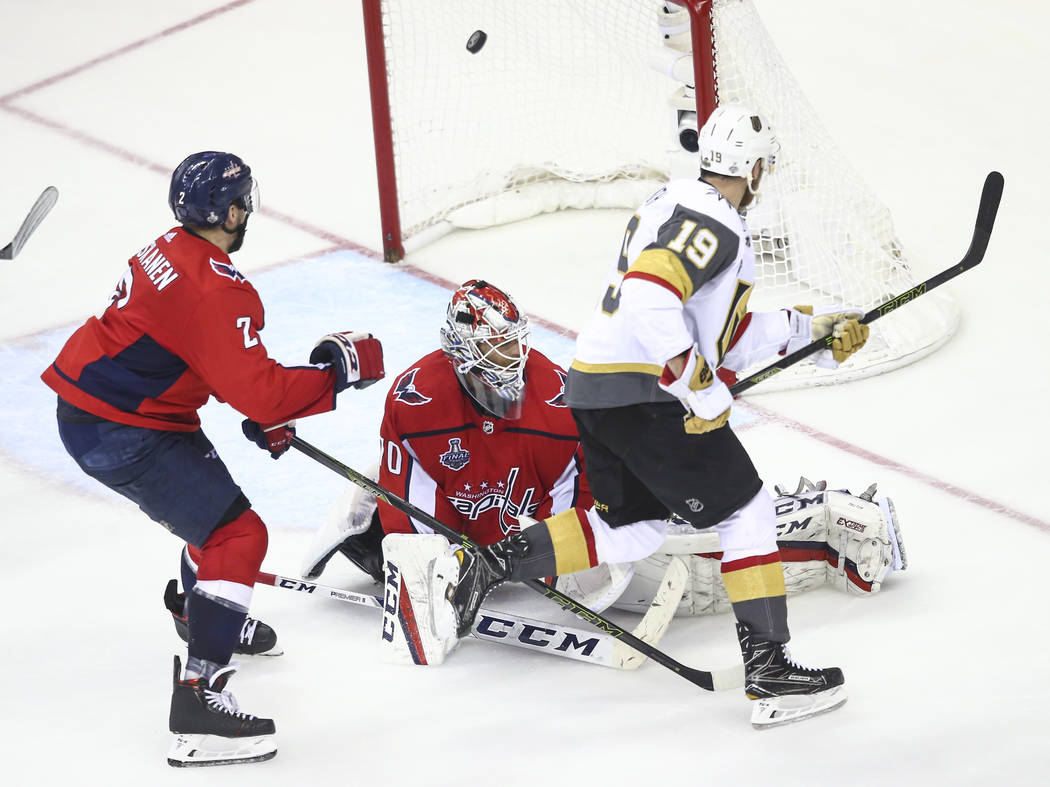 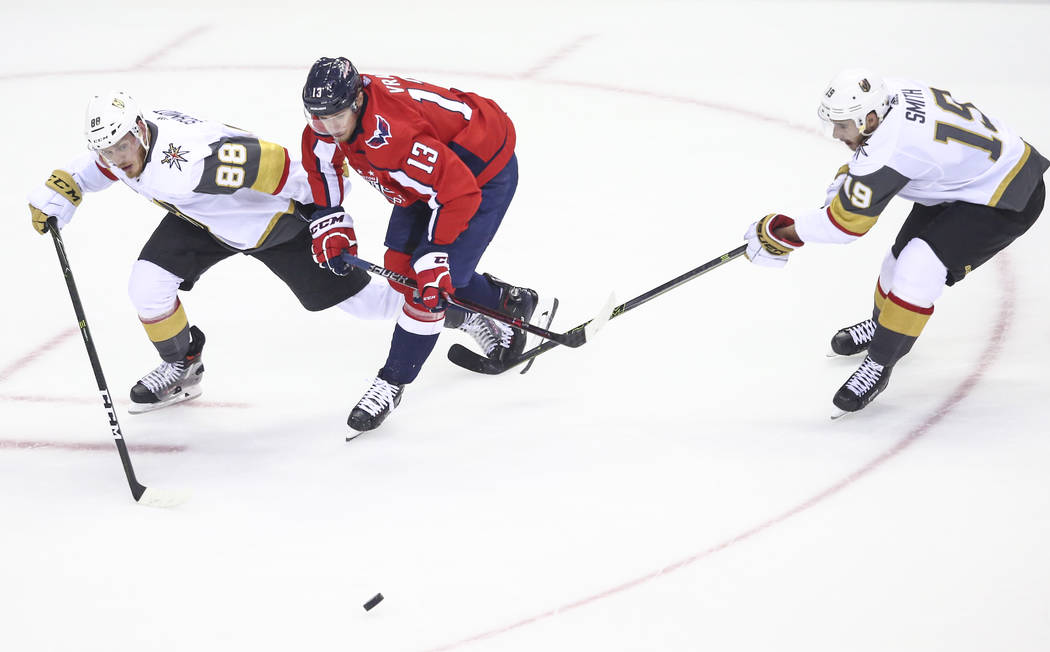 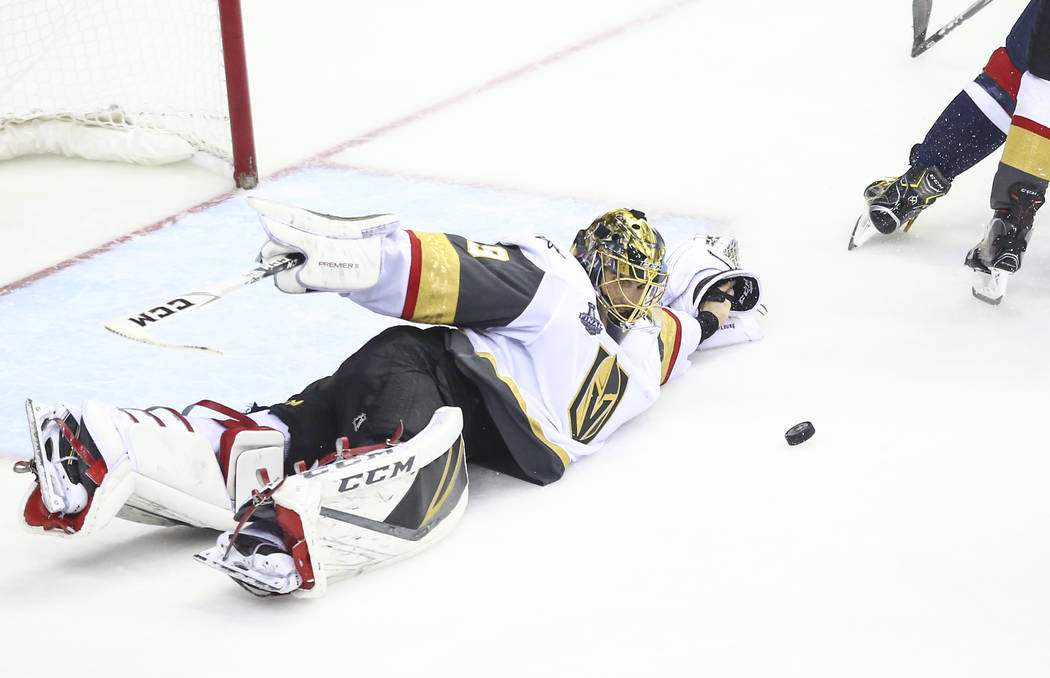 Golden Knights goaltender Marc-Andre Fleury (29) blocks a shot from the Washington Capitals during the third period of Game 4 of the Stanley Cup Final at Capital One Arena in Washington on Monday, June 4, 2018. Chase Stevens Las Vegas Review-Journal @csstevensphoto 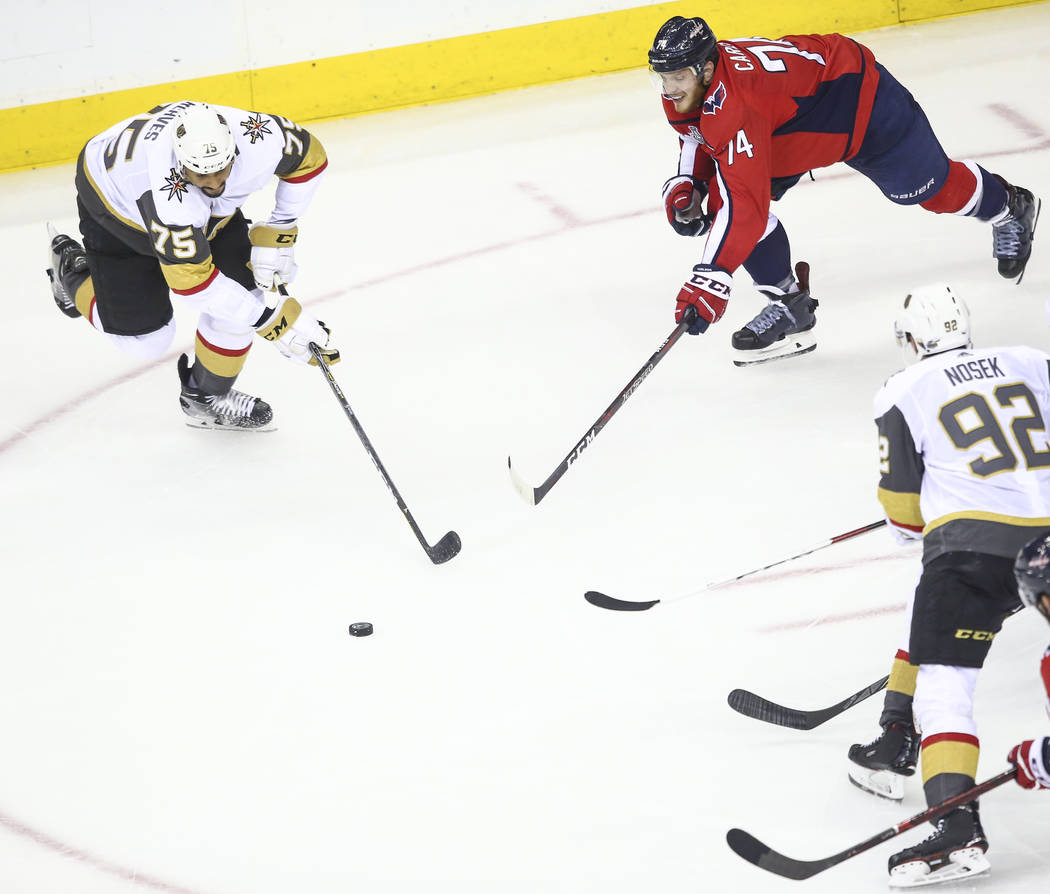 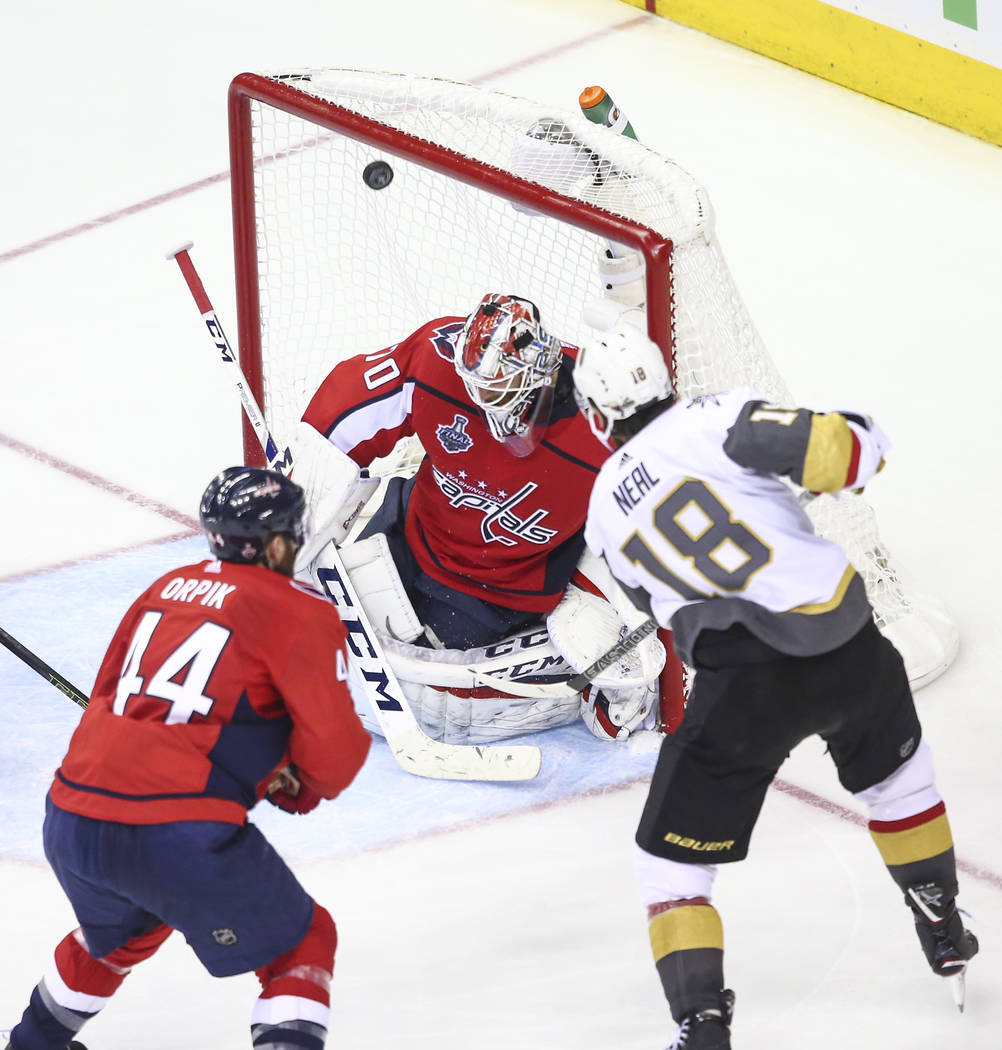 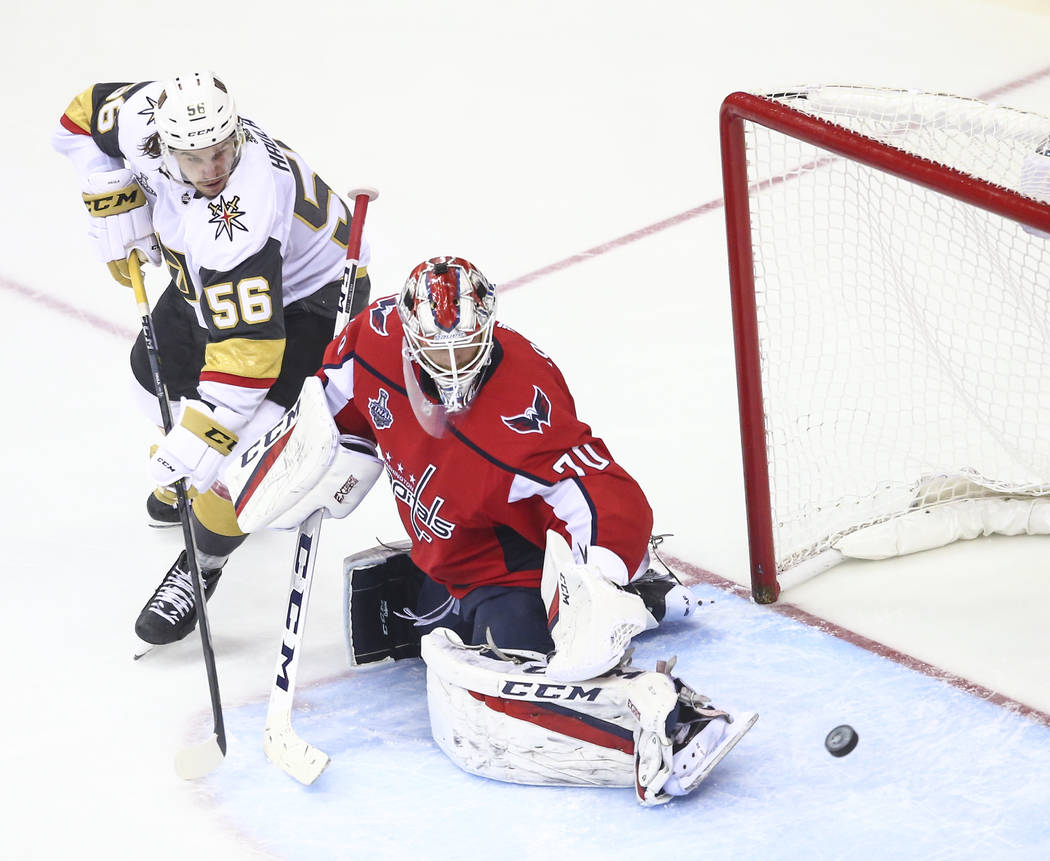 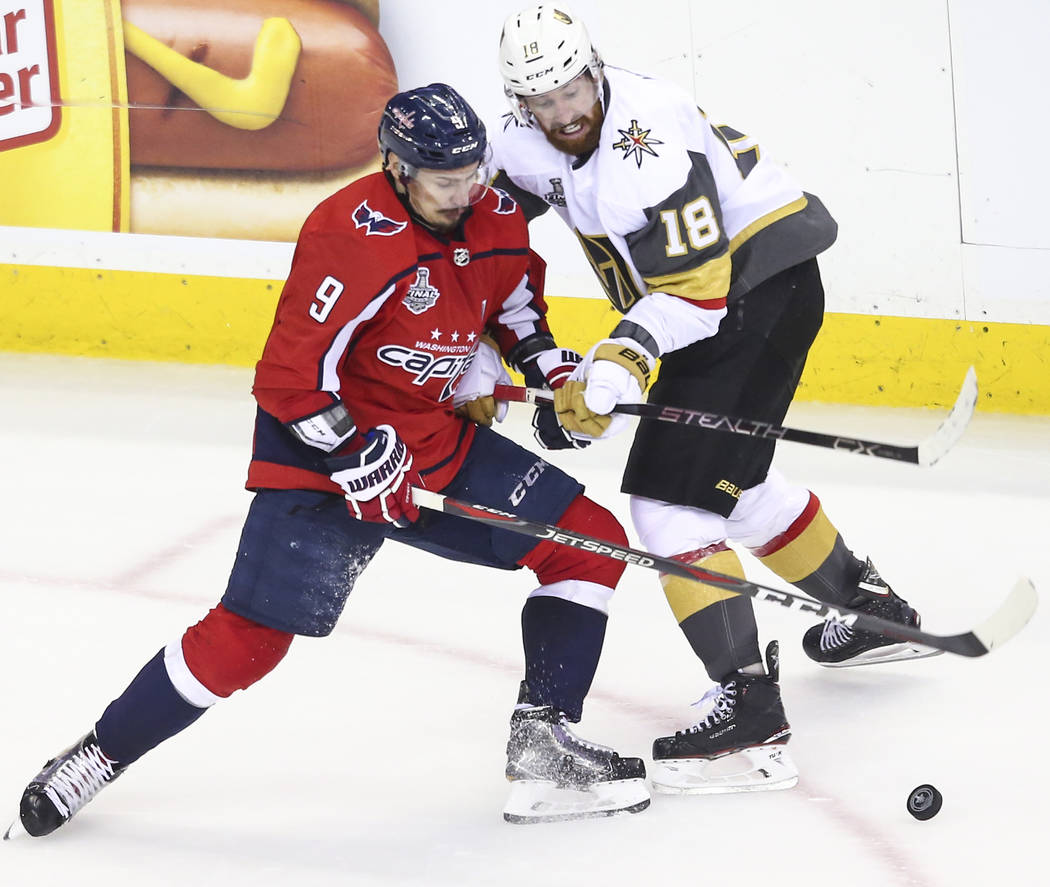 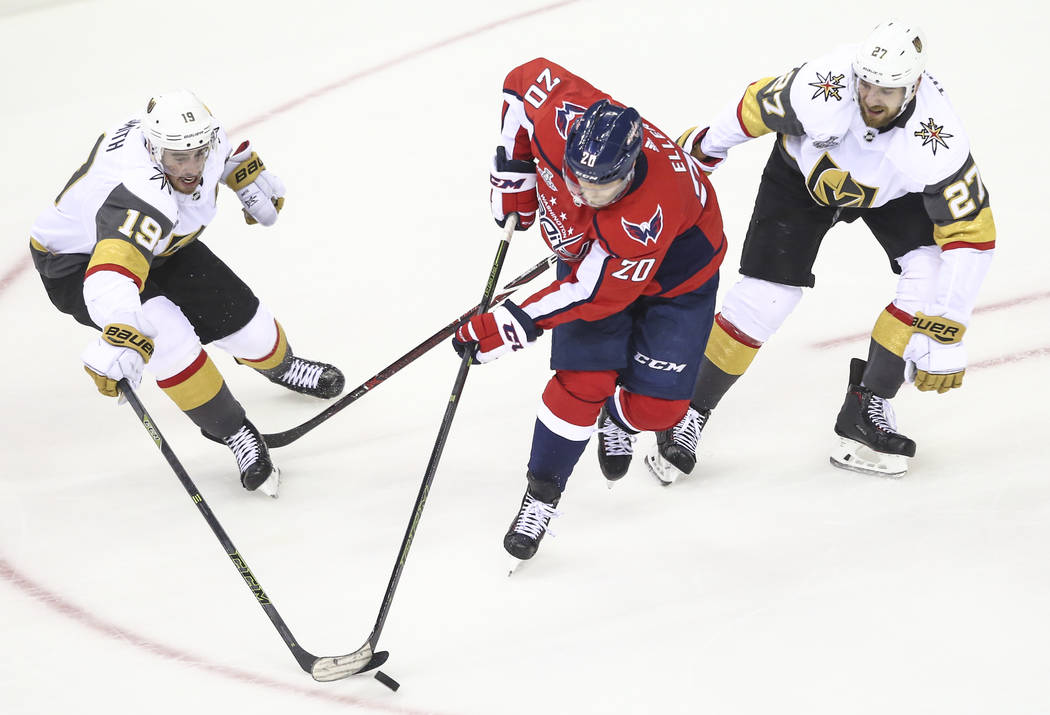 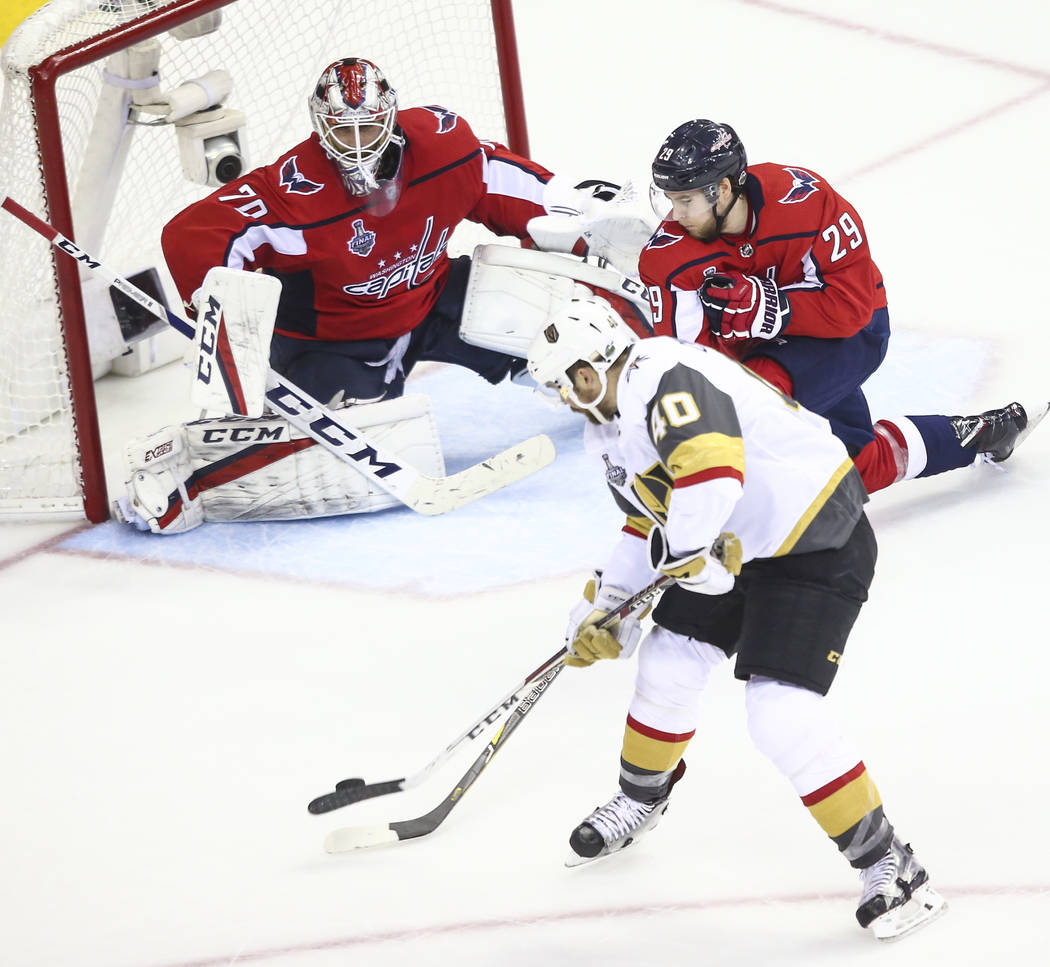 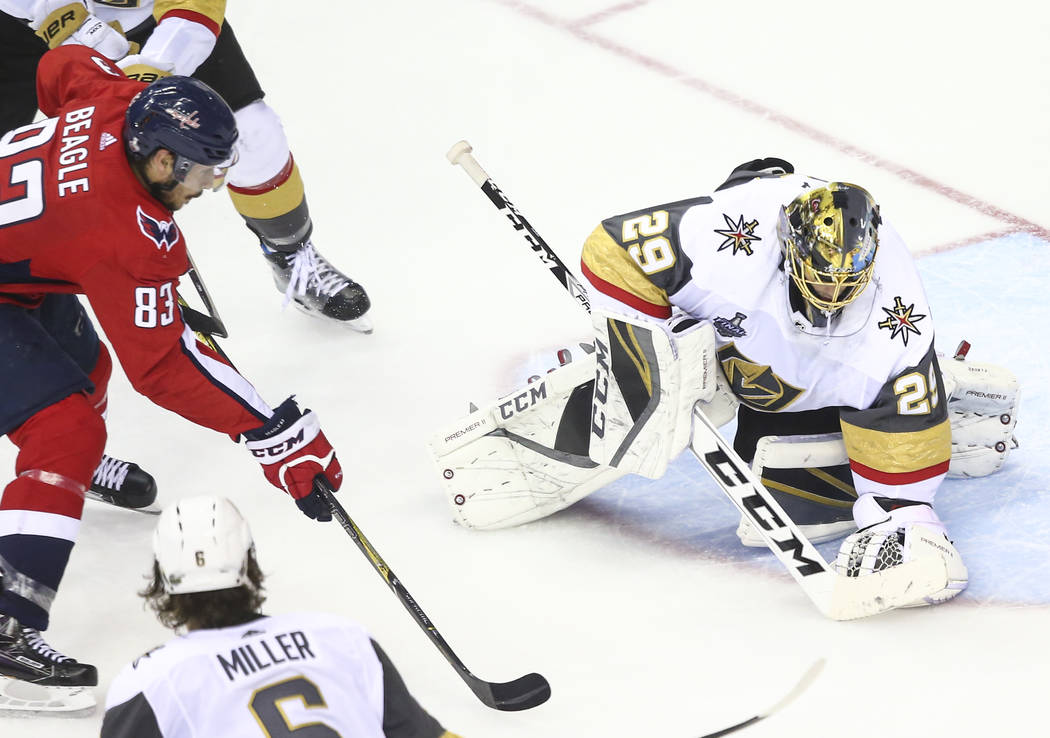 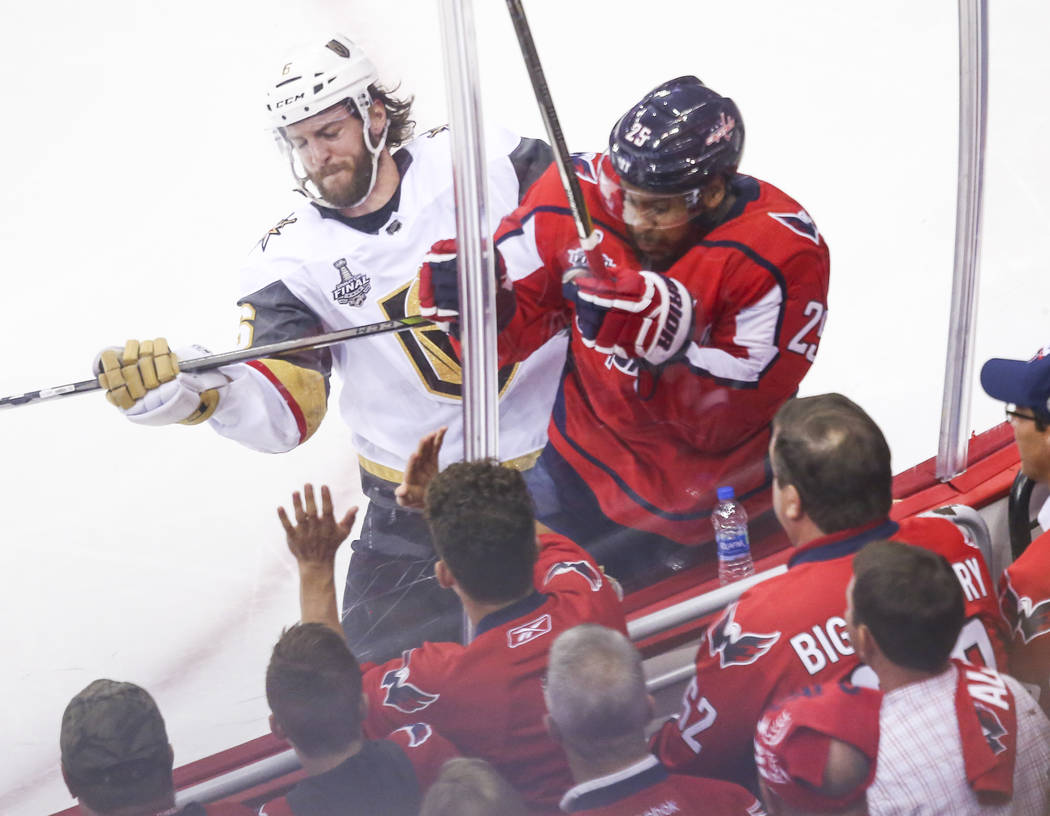 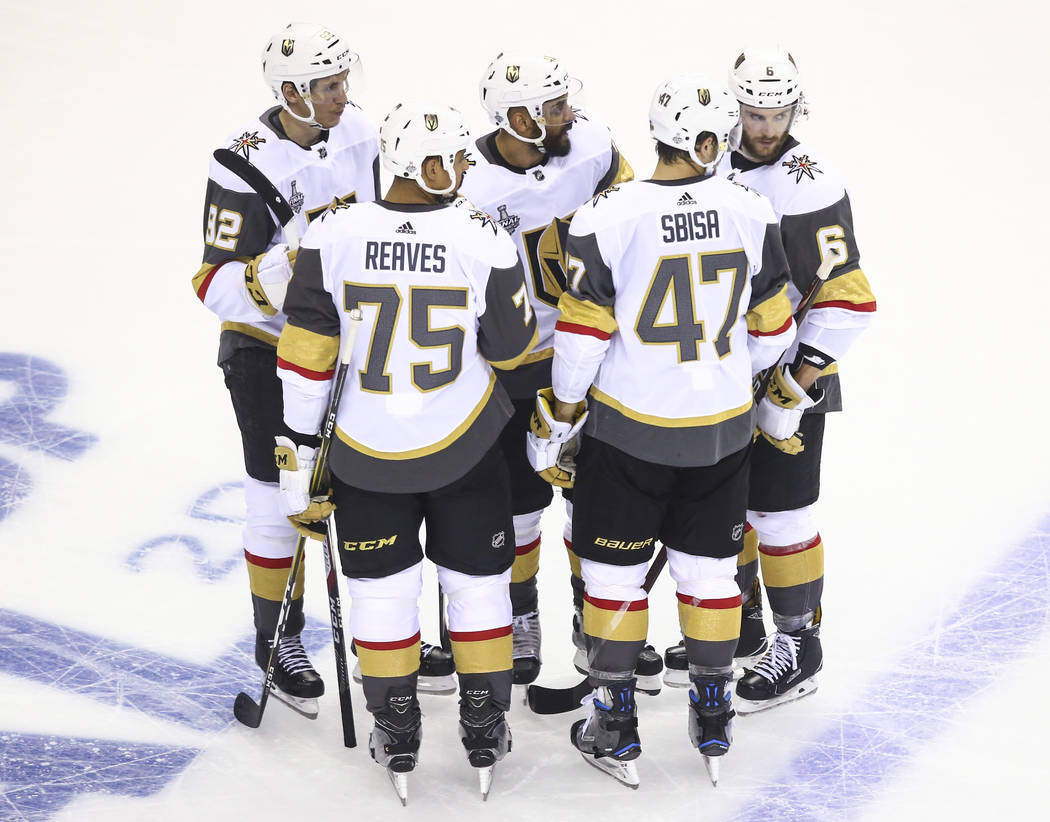 Golden Knights talk during a break in play during the second period of Game 4 of the Stanley Cup Final against the Washington Capitals at Capital One Arena in Washington on Monday, June 4, 2018. Chase Stevens Las Vegas Review-Journal @csstevensphoto

The books about the Golden Knights’ fairy tale season are almost ready to go to the publishers. The documentaries are being edited. And somewhere in Hollywood, producers probably started casting the movie.

All that’s missing is the ending.

The Knights defied the odds throughout their unprecedented inaugural season, but now face their biggest challenge in the form of a 3-1 deficit to the Washington Capitals in the best-of-seven Stanley Cup Final.

But if the Knights have taught us anything, it’s to expect the unexpected.

“Nobody’s quitting,” goaltender Marc-Andre Fleury said. “We’ve got to focus on one period at a time, start from there. We won four in a row against Winnipeg, which was a pretty good team. Relax, play our game, see where that takes us.”

The Knights flew home Tuesday morning and were forced to come to terms with their 6-2 loss in Game 4, a scoreline that Knights coach Gerard Gallant thought slightly flattered Washington.

After struggling to solve the Capitals’ stingy 1-1-3 neutral-zone trap in Game 3, the Knights had more shot attempts (71-41), scoring chances (31-21) and high-danger chances (13-8) than Washington in Monday’s loss, according to NaturalStatTrick.com.

“I thought last night’s game we played real hard, we played real well,” Gallant said during a conference call with reporters Tuesday. “Probably with a couple of breaks, we could have been up 2-0 early in that first period. Again, I think we have to work hard and play the way we played last night to maybe get some of those breaks.

“That was a step in the right direction last night. Hopefully, we can start the next game off in our building and be ready to go again.”

The Knights showed their frustration late in the third period after defenseman Colin Miller appeared to take an elbow to the face from Capitals forward T.J. Oshie moments before Michal Kempny scored to put Washington up 5-2 with 6:21 left.

Gallant was incensed that there was no penalty called, but at least one replay showed Miller’s face made contact with the back of Oshie’s helmet, not his elbow, when they collided. Gallant said Miller suffered a broken nose on the play.

Knights defenseman Brayden McNabb was penalized for cross-checking Oshie into the boards with 2:16 remaining, which almost led to a full-on donnybrook. Defenseman Deryk Engelland and Oshie were assessed 10-minute misconducts, and forward Ryan Reaves picked up a 10-minute misconduct after jawing with the Capitals’ Devante Smith-Pelly in the final minute.

The Knights finished with a season-high 32 minutes in penalties, and Washington finished 3-for-5 on the power play in Game 4.

“Obviously, the three power-play goals against us really hurt us,” Gallant said. “I thought we battled back in the hockey game and got to 4-2. That fifth goal, which nobody liked, thought there should be a penalty against them.”

Washington made an adjustment on its power play for Game 4, stationing defenseman John Carlson at the left faceoff circle rather than Alex Ovechkin.

Carlson scored on a one-timer in the second period after a cross-ice pass from Conn Smythe Trophy candidate Evgeny Kuznetsov.

Washington has picked apart the Knights defense throughout the series with backdoor passes that have left Fleury stranded.

Washington has blown more 3-1 series leads (five) than any other franchise, the most recent instance coming in the 2015 Eastern Conference semifinal against the New York Rangers.

But the Knights are not thinking past Game 5, which is at 5 p.m. Thursday at T-Mobile Arena.

“I think we’ve got to come out and start the way we started (Monday) night,” Gallant said. “We’ve got to be ready to play. We’re going to play in our building. The pressure’s off us. We’re going to work hard and have some fun. We’ll see what happens.”