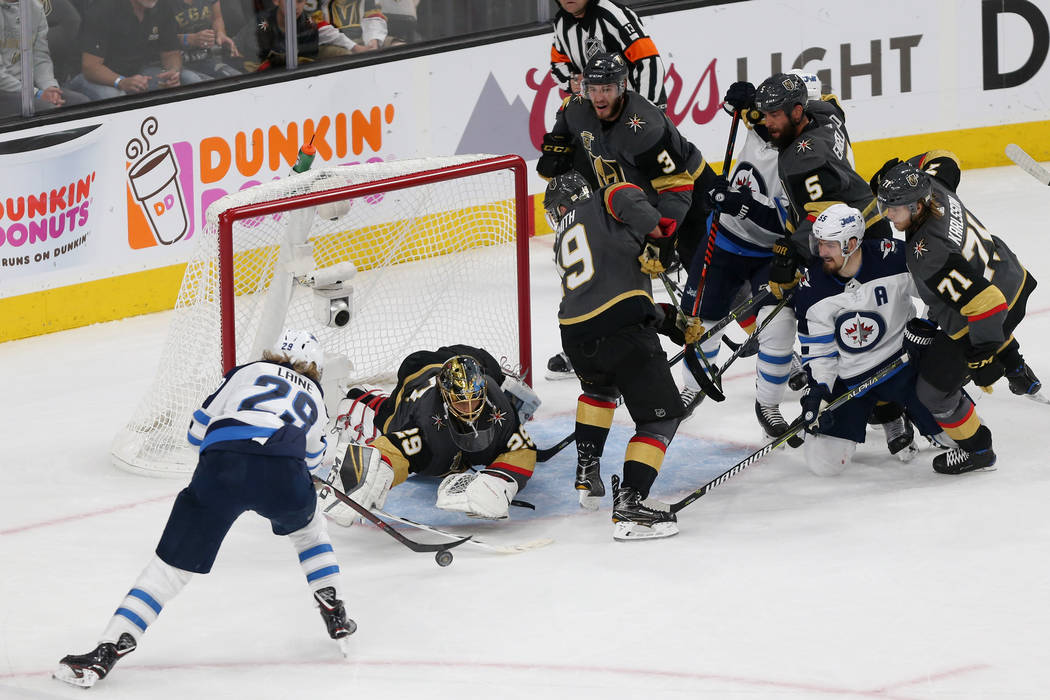 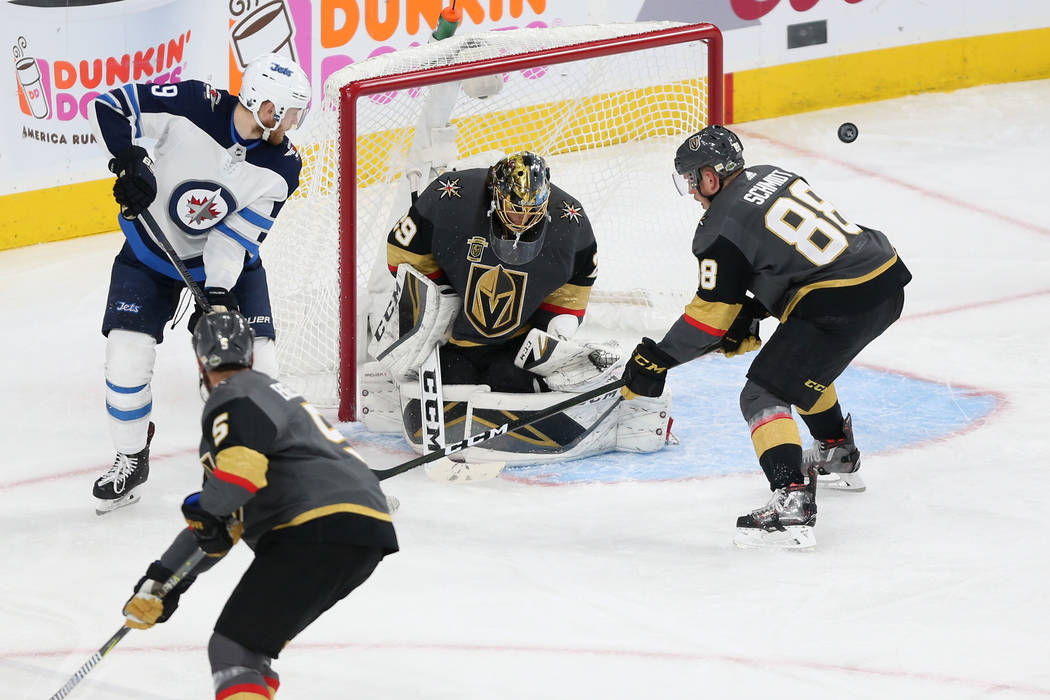 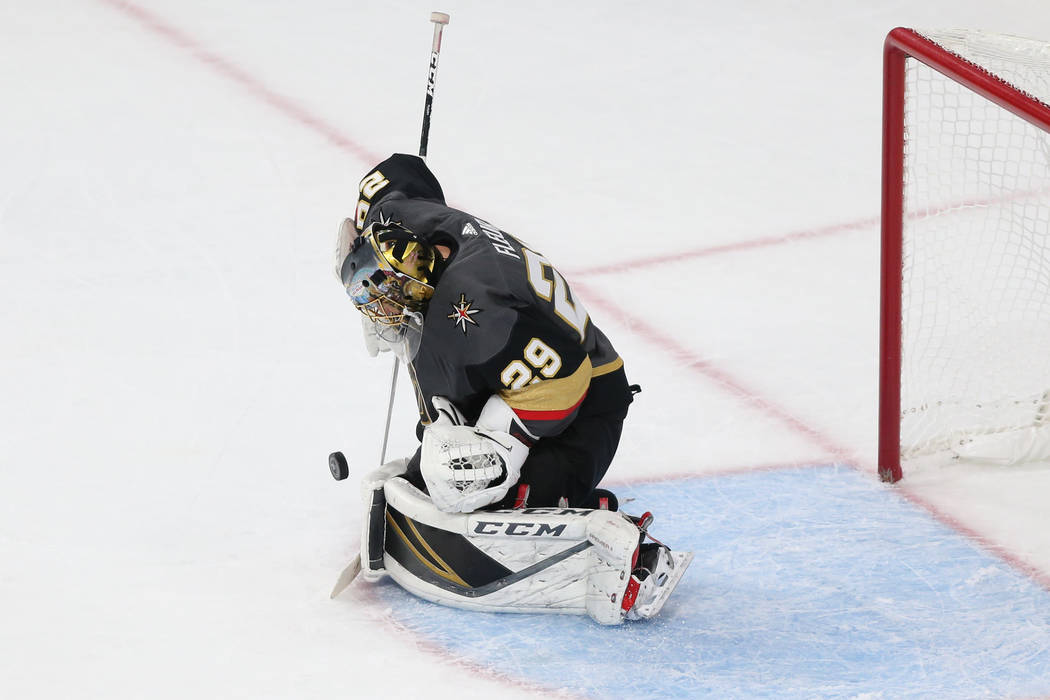 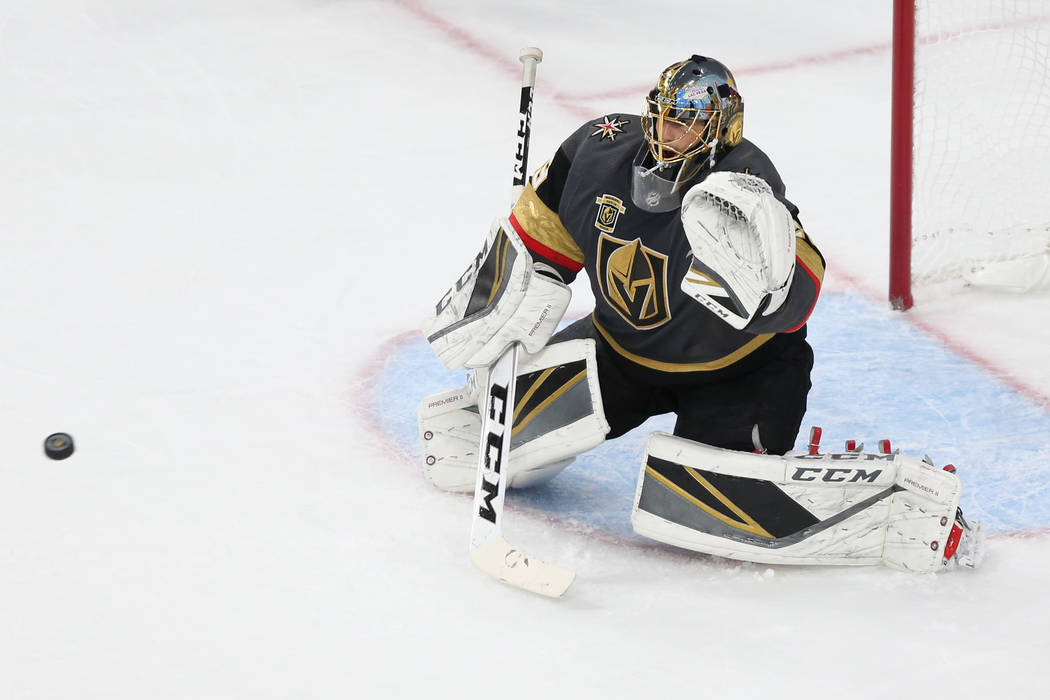 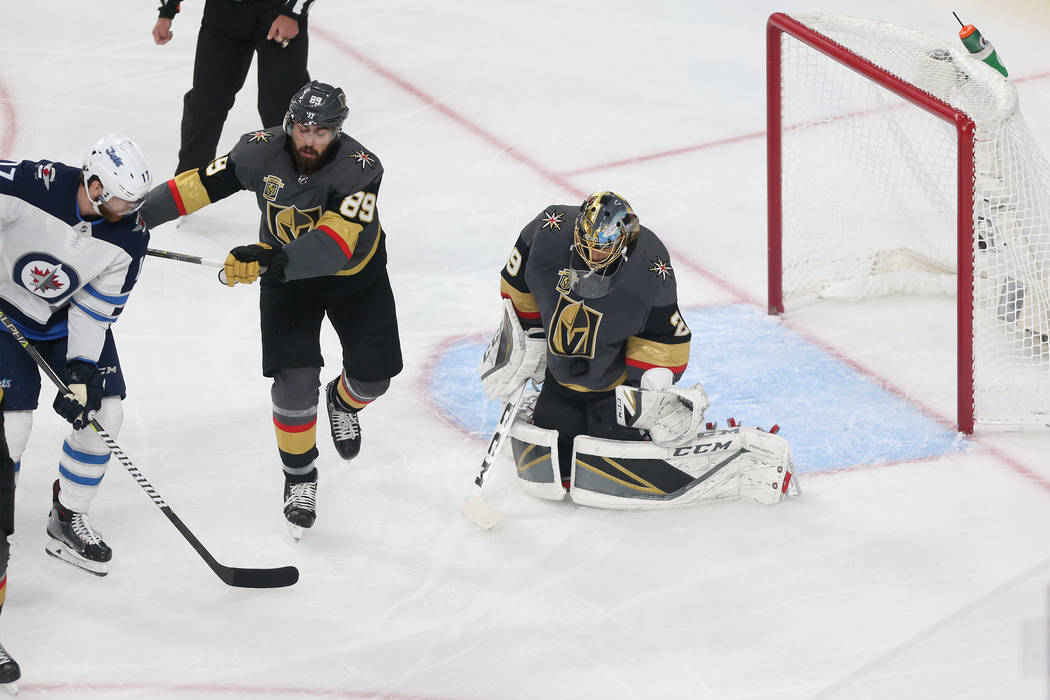 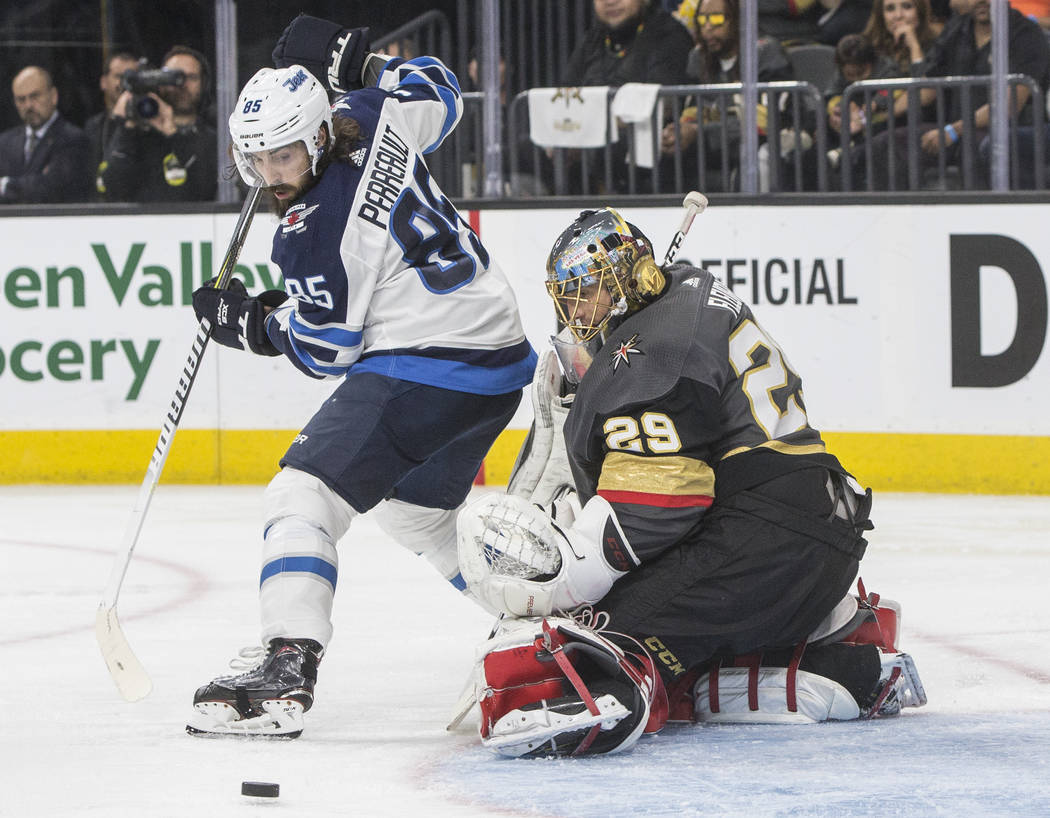 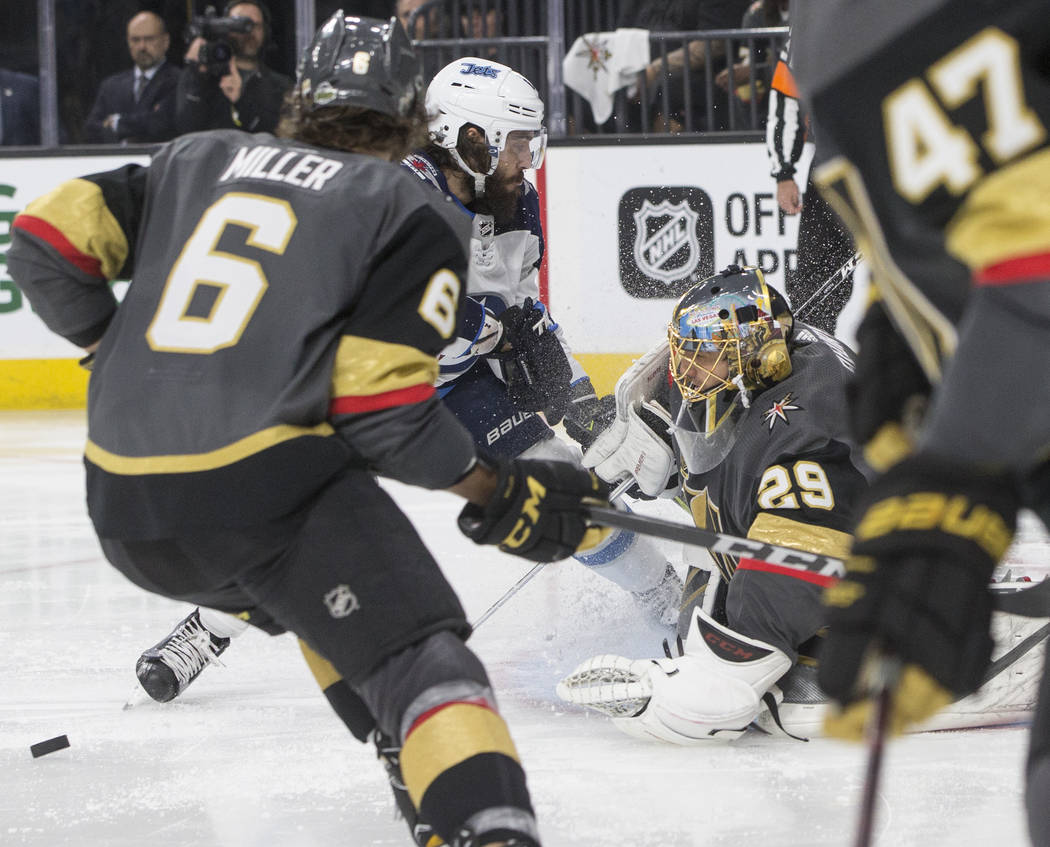 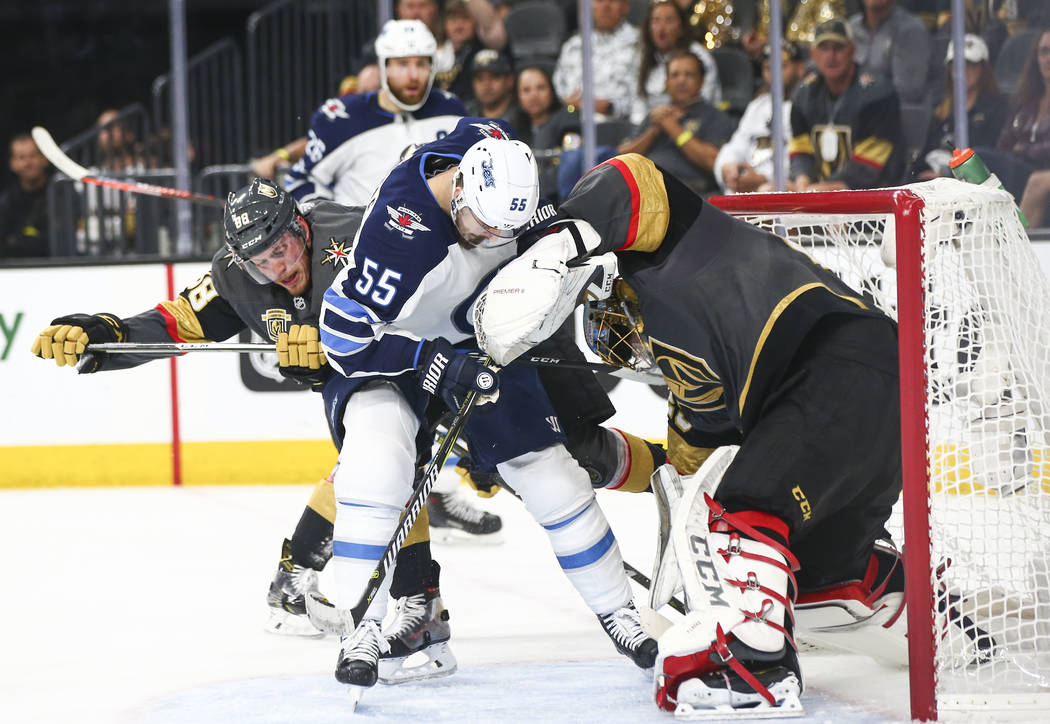 WINNIPEG, Manitoba — Connor Hellebuyck’s comments from the middle of last week continue to reverberate around the NHL and draw side-eyes from the Golden Knights.

After Winnipeg’s loss in Game 3 on Wednesday, the confident goaltender who turned 25 on Saturday was asked about his head-to-head matchup against the Knights’ Marc-Andre Fleury.

“I don’t want to respond to his game,” Hellebuyck said. “He’s obviously a big part of their team and playing very well.

Fleury has outdueled Hellebuyck during the Western Conference Final and put the Knights on the brink of playing for the Stanley Cup entering Sunday’s Game 5.

Opening faceoff is scheduled for noon at Bell MTS Place.

“I don’t mind being confident, but I don’t think you should go against the potential Conn Smythe player for our team. He’s been our best player all playoffs,’’ Knights forward Jonathan Marchessault said Friday after his team’s 3-2 victory in Game 4. “Fleury was there to back it up and made key saves. I think Hellebuyck is a great goalie, but Fleury’s better.”

Hellebuyck, one of three finalists for the Vezina Trophy as the league’s top goaltender, has allowed nine goals during the Jets’ three-game losing streak.

He hasn’t played poorly in his first postseason appearance. But in a series this tight, Fleury’s play has been the difference in the Knights owning a 3-1 advantage rather than returning to Winnipeg tied at 2.

Through the first four games of the conference final, Hellebuyck has a 2.81 goals-against average and a pedestrian .897 save percentage.

“He’s certainly been really good, and he’s made three saves each game that gives their crowd a reason to get on their feet, and rightfully so,” Jets coach Paul Maurice said of Fleury. “He’s made three or four in both of these games (in Vegas). It’s an empty netter in (Game 3) or they’re one-goal games, so that feels like it’s the difference.

“You’ve got to assume that he’s going to get three or four of those a night and find a way to get the knucklers in that we need to have going for us.”

Fleury has come up with timely saves throughout the series, such as his diving stop on Winnipeg’s Mark Scheifele midway through the third period of Game 3 to keep the Knights up by one goal.

In contrast, Hellebuyck was unable to bail out his teammates Friday, as Reilly Smith beat the Jets’ netminder short side for the winning goal with 6:58 remaining.

Hellebuyck also made two costly gaffes the past two games that led directly to goals.

In Game 3, Erik Haula cut off Hellebuyck’s clearing attempt behind the net and zipped a pass to James Neal for a goal 12 seconds after the Jets had tied the score.

“I’ve liked (my game) all series long,” Hellebuyck said Friday. “Obviously it’s got to be a little bit better because we’ve got to win, that’s the bottom line.”

Winnipeg outplayed the Knights in the third period of the past two games but had nothing to show for it because of Fleury.

After a Game 4 that saw the Jets dominate possession with an 85-59 advantage in shots attempts, Smith was asked how the Knights survived the onslaught.

“Well, he’s sitting beside me,’’ Smith said, referring to Fleury.

Fleury, a three-time Stanley Cup champion, has been relaxed throughout the postseason.

He jumped for joy after his highlight-reel save on Scheifele. And his fun-loving personality — not to mention wealth of experience — appears to have rubbed off on his teammates during this historic postseason run.

“Maybe it wasn’t always like this, you know?” Fleury said Saturday during the Knights’ media availability. “I just learned that, for me, that’s what works best to stay loose and having fun and enjoying the game. I think it helps me play better and, obviously, down by four goals, I’m not smiling or having fun.

“Obviously, we’re winning and it’s been a great run. I just try to stay loose, keep the guys loose and focus on my job.”