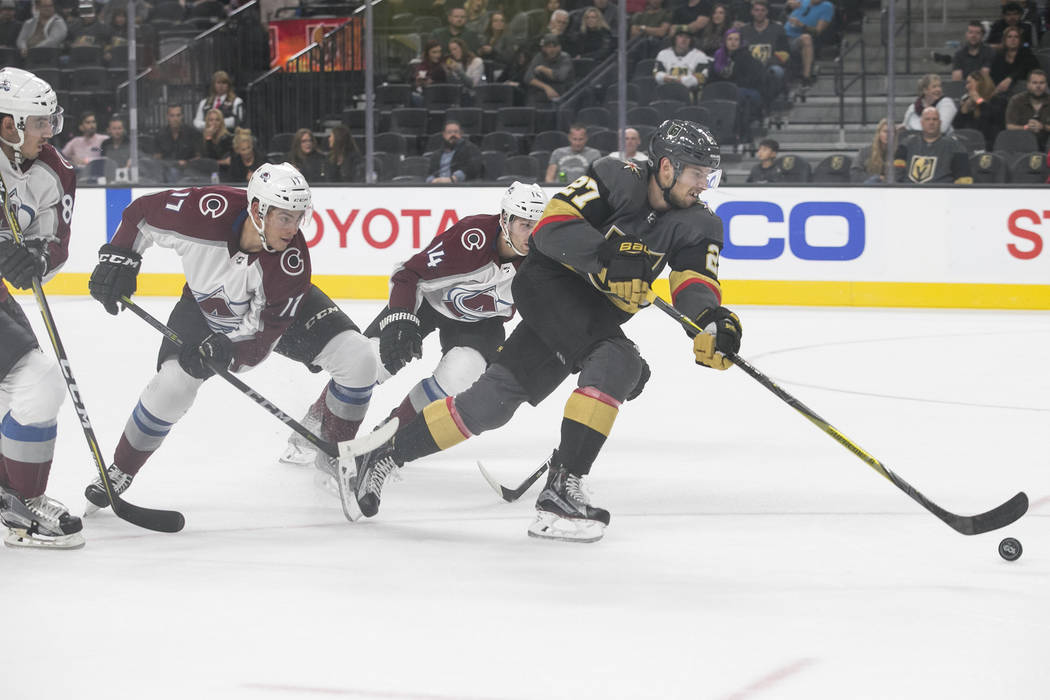 NEW YORK — Shea Theodore was a man on the move Monday.

The Knights recalled the 22-year-old defenseman from Chicago of the American Hockey League and reassigned defenseman Griffin Reinhart to the Wolves after Reinhart cleared waivers earlier in the day.

Theodore was traveling to New York on Monday morning and joined the team in time for the game against the New York Islanders at Barclays Center. In 11 games with the Wolves, Theodore scored five goals and had 11 points.

Theodore skated in the pregame warmups but was eventually listed as a healthy scratch along with fellow defenseman Jon Merrill and forward Brendan Leipsic as the Knights fell to the Isles 6-3, but he will be available for Tuesday’s game at Madison Square Garden against the New York Rangers.

In addition, defenseman Jason Garrison, who cleared waivers Saturday, reported to the Wolves on Monday.

Monday, Knights goaltender Oscar Dansk received some national recognition as the NHL made him one of its Three Stars of the Week after Dansk went 2-0, had a 1.00 goals-against average and recorded the first shutout in franchise history when he was in net for Friday’s 7-0 win over Colorado.

Dansk, who was picked as the week’s No. 2 star, was the second Knights player to be so honored this season. Marc-Andre Fleury was the second star the week of Oct. 9.

There was no official news to report Monday on the Vadim Shipachyov situation. Shipachyov was suspended without pay Sunday by the Knights after leaving Chicago without permission and failing to report for the Wolves’ game vs. Milwaukee on Saturday.

His agent, Petr Svoboda, said he’s still trying to facilitate a trade which would be subject to general manager George McPhee giving final approval. There also has been speculation that the Knights could terminate Shipachyov’s contract for his having breached the deal by going AWOL Saturday and violating the terms of the contract. But that had not taken place either.

Sportsnet.ca reported Monday that Shipachyov had decided to go back to Russia. The Knights did not confirm this and until he goes through unconditional waivers and his contract is terminated, he remains with the team.

It has been a tough start for the New York Rangers, the Knights’ Tuesday opponent. The Broadway Blueshirts are in the Metropolitan Division cellar with just three wins in 12 games and are 3-5-2 in their past 10. The Rangers’ 43 goals against is the third most in the Eastern Conference, trailing only Pittsburgh (50) and Buffalo (44).

Henrik Lundqvist, the Rangers’ veteran standout goaltender has really struggled, going 2-4-2 with a 3.11 goals-against average and a .900 save percentage. The King has sat the past two games as coach Alain Vigneault has elected to start Ondrej Pavelec. In the two recent starts, Pavelec went 1-1, beating Arizona last Thursday and losing Saturday at Montreal. Overall, he is 1-3 with a 3.64 GAA and an .887 save percentage.