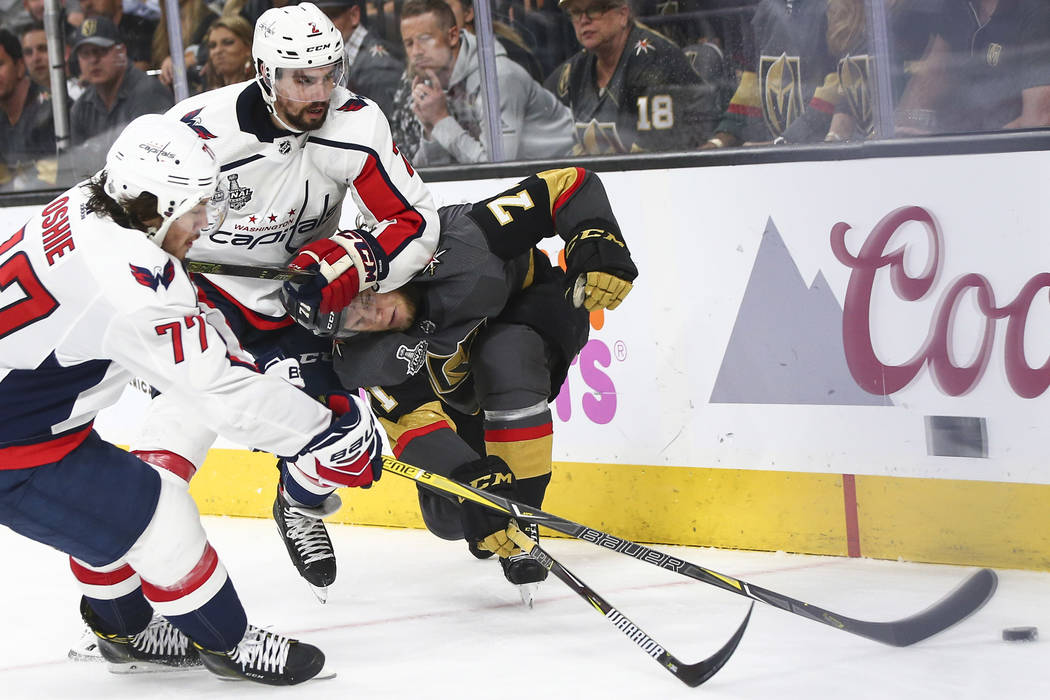 William Karlsson has been one of the Golden Knights’ most durable players this season.

That made his absence during Wednesday’s optional practice at City National Arena, 30 hours before Game 5 of the Stanley Cup Final, all the more noticeable.

Coach Gerard Gallant said Karlsson will be in the lineup Thursday when the Knights try to stave off elimination against the Washington Capitals, who lead the best-of-seven series 3-1.

But it appears the team’s first-line center and leading scorer during the regular season could be at less than 100 percent when the puck drops at 5 p.m. at T-Mobile Arena.

“He took a day off,” Gallant said Wednesday. “It was an optional practice, and as you see everybody was out there, but he just thought the best thing for him tomorrow night was to take today off. He’ll be fine for tomorrow, if that’s what you’re asking.”

Karlsson was one of two players to appear in all 82 regular-season games and he rarely — if ever — missed an optional skate. He’s played in each of the Knights’ 19 playoff games.

Karlsson, who was third in the league with 43 goals during a breakout regular season, has seven goals and 15 points in 19 postseason games.

But all the wear and tear, or potential injury, might account for Karlsson’s struggles the past two games. He was held scoreless in both games at Washington and failed to register a shot on goal in Game 3.

For the series, Karlsson has one goal and one assist with five shots on goal. After leading the league with a plus-49 rating during the regular season, he is a minus-2 in four games against the Capitals.

Oscar Lindberg skated in Karlsson spot between Smith and Jonathan Marchessault at practice Wednesday. Karlsson was not available to the media.

“You’ve got to give credit to them,” Marchessault said. “I think they’re doing a good job to shut us down. But that’s adversity that we faced all year I think as a team and as a line. I think in those situations your best players have to be your best players, and we’re going to bring our ‘A’ game.”

Karlsson was on the ice in the third period of Game 4 when defenseman Michal Kempny got free on the weak side during 4-on-4 play and scored to put Washington up 5-2 with 6:21 remaining.

Smith and Marchessault were given the next shift as play remained at 4-on-4, but Gallant kept his top line on the bench for the remainder of the game with the score out of hand.

When asked if there’s anything to read into Karlsson’s absence Wednesday, linemate Reilly Smith said, “I wouldn’t.”

Washington coach Barry Trotz won the matchup battle against Gallant during 5-on-5 play the past three games, often using his second line of Nicklas Backstrom, T.J. Oshie and Jakub Vrana along with defensemen Dmitry Orlov and Matt Niskanen to neutralize Karlsson’s line.

In Game 1, the Knights’ top line was matched primarily at 5-on-5 against the Capitals’ No. 1 line of Alex Ovechkin, Evgeny Kuznetsov and Tom Wilson.

Karlsson, Marchessault and Smith combined for two goals and two assists in the 6-4 victory and did their damage when Gallant found them shifts against the Capitals’ third and fourth lines.

With the Knights at home in Game 5, Gallant could opt to use the final change to get Karlsson’s line those favorable matchups and away from the Backstrom unit.

“We’re not really a hard-match team. When we’re rolling four lines, I think we’re going to have the most success.”

The Knights, who haven’t lost four straight games at any point this season, are looking to join the 1942 Toronto Maple Leafs as the only teams in NHL history to overcome a 3-1 deficit in the Stanley Cup Final. (Toronto was down 3-0.)

They remained a loose and confident group Wednesday. As Smith and Marchessault noted, it’s a team that overcame adversity throughout the season.

“We’re down 3-1. I think they’re in a better situation than us, that’s for sure,” Marchessault said. “But stuff that we’ve done this year has never been done, so that’s the thinking that we have right now.”