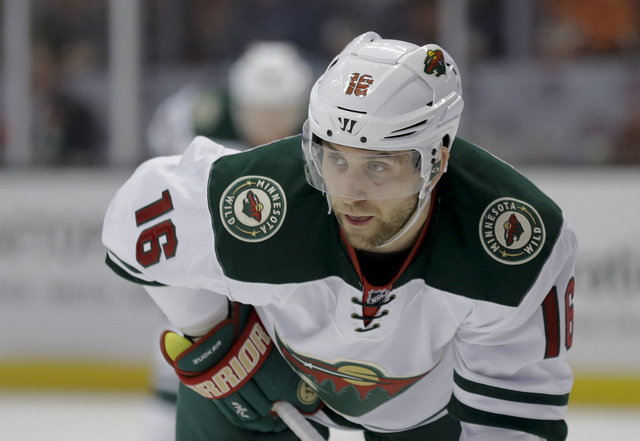 Minnesota Wild left wing Jason Zucker lines up against the Anaheim Ducks during the first period of an NHL hockey game in Anaheim, Calif., on Wednesday, Jan. 20, 2016. (Chris Carlson/AP)

For Jason Zucker and Deryk Engelland, training camp is still three weeks away. But the duo will be on the ice Saturday for a good cause.

Zucker, a forward with the Minnesota Wild, and Engelland, a defenseman with the Calgary Flames, will participate in the 4th annual Las Vegas Firefighters Youth Hockey Foundation charity game at 5 p.m. at the Fiesta Rancho’s SoBe Ice Arena. Part of the proceeds from the game will go to help families who can’t afford hockey for their children.

“It gets bigger every year,” said Eric Littmann, a captain for Las Vegas Fire & Rescue and one of the event’s organizers. “It’s fun for those who play and for the fans who come out to watch. And this year it has extra meaning.”

On Aug. 11, Wesley Payton died after battling leukemia. The 7-year-old from Las Vegas had been diagnosed with the cancer 14 months ago. Half the proceeds raised Saturday will be donated to his family.

“He was a wonderful kid,” Littmann said. “We were really looking forward to having him with us at the game. But his family will be there and we are grateful for that.”

The foundation has raised more than $20,000 in its first three years, much of it through grants from USA Hockey. Littmann said families that need assistance to help their kids play fill out a form and the foundation takes it from there. According to figures from USA Hockey, there were 1,358 registered players in Nevada in 2015.

“Hockey is an expensive sport,” said Littmann, who is originally from Boston and still plays. “Anything we can do to help kids in Las Vegas stay on the ice and stay off the streets is worth it. We see what happens when kids have nothing to do.”

Zucker, who is Las Vegas’ lone NHL player, said it’s an easy call to play in the game, where no checking is allowed and the chances of getting injured are minimal.

“I think it’s a great way to give back to the community,” he said. “It benefits so many people and it’s always a fun game to be a part of.”

In addition to the game, there’ll be a silent auction with signed memorabilia from Zucker; Engelland, who had played for the Las Vegas Wranglers; and other items up for bid.

“The hockey community here is very small,” Littmann said. “Now that we have the NHL, it’s obviously going to grow. But this is a way for everyone to come together and support the game and the community.”