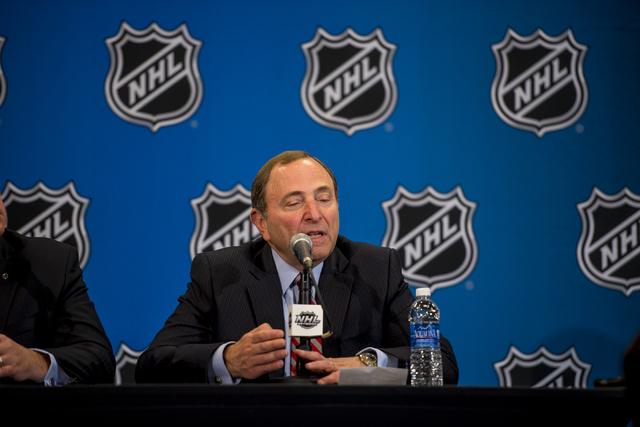 It’s one of the busiest weeks on the NHL calendar, and not a single goal will be scored.

The league’s annual Awards Show comes to Las Vegas on Wednesday at the Hard Rock Hotel. The NHL has held the event here for seven years, and the Hard Rock becomes the fourth host venue, following the Palms, Wynn Las Vegas and the MGM Grand.

Before the first award is handed out, Las Vegas is expected to be announced as the NHL’s 31st franchise. The Board of Governors meets Wednesday morning at Encore and is expected to approve expansion for the 2017-18 season. Bill Foley, the billionaire businessman who led the drive to bring major league sports to town, will pay $500 million to join the NHL.

The league has scheduled a news conference at 1 p.m. Wednesday at Encore, where commissioner Gary Bettman is expected to announce the expansion decision.

In conjunction with the Awards Show, the Stanley Cup will be on display at noon Monday in the Hard Rock Hotel lobby and will have limited viewing times Monday and Tuesday. All 20 of the NHL’s trophies are on display through Tuesday, and there is no charge to view the collection.

The Awards Show begins at 4 p.m. Wednesday at the Joint. It is not open to the public, but will be televised live by NBC Sports Network. Comedian Will Arnett will host.

On Friday, the NHL heads to Buffalo, New York, for the two-day Entry Draft. The Toronto Maple Leafs have the No. 1 pick and are expected to select Auston Matthews, an 18-year-old center from Scottsdale, Arizona, who played professionally in Switzerland this season instead of junior or college hockey.