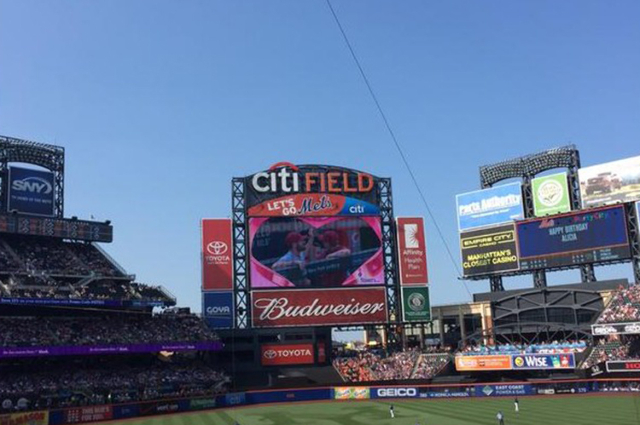 The New York Mets said the team will stop featuring players on the kiss cam after some fans complained the stunt was homophobic. (CNN)

The New York Mets said the team will stop featuring players on the kiss cam after some fans complained the stunt was homophobic.

The kiss cam will continue, said Jay Horwitz, vice president of media relations, but it will no longer feature players in the heart-shaped frame in an apparent joke.

“We have, on occasion, included players from opposing teams in our popular in-game kiss cam feature. While intended to be lighthearted, we unintentionally offended some. We apologize for doing so and no longer will include players in the feature. Our organization is wholly supportive of fostering an inclusive and respectful environment at games,” the organization said Wednesday.

It’s a stunt familiar to anyone who has been to a professional sporting event: The kiss cam pans across the stands, featuring different couples, before settling on two men or two women in an apparent joke, eliciting laughter from the stands.

A few notable exceptions have turned the gag into an inclusive gesture. In May, the Los Angeles Dodgers featured a same-sex couple sharing a genuine kiss, prompting cheers throughout the stadium.

Such instances are still the exception and not the rule.

New Yorker Etan Bednarsh, a lifelong Mets fan from the moment he saw catcher Todd Hundley hit a home run, first witnessed the gag in April at a Mets game against the Philadelphia Phillies. The heart-shaped frame captured several smooching couples before landing on two players in the Phillies dugout, prompting snickers.

To Bednarsh and his friends, it was no laughing matter. He whipped out his phone and tweeted at the Mets.

“Putting two men together on the kiss cam isn’t a punch line. I want to keep coming to games. Please stop doing this,” he said.

He didn’t hear from the team, even as he kept tweeting at it each time he saw the stunt repeated in subsequent games.

“The most charitable thing to say is it’s a junior high gay joke,” Bednarsh said in a phone interview Wednesday.

“All I can say is try to picture the same joke, the same dugout with a man and woman and there’s no joke. There’s nothing funny about it,” he said. “Tell me what the joke is without getting back to the basic sentence that the joke is the idea of two male athletes kissing, or two men kissing.”

Frustrated as the gag continued throughout the season, he compiled similar complaints from other fans and tweeted them at the team.

He finally got the news he was waiting for on Wednesday, when he appeared on Huffington Post Live to discuss the issue. After months of tweeting at the Mets, urging them to end the practice, the organization issued a statement on the matter.

Bednarsh welcomed the news as an important first step. He hopes other teams will follow the Mets’ example and start showing actual same-sex couples.

“It’s no secret sports is still a really rough place for LGBTQ players and fans,” he said. “I’m really thrilled that we’re at this place, regardless of how long it took, and I’m proud that the Mets made this commitment.”