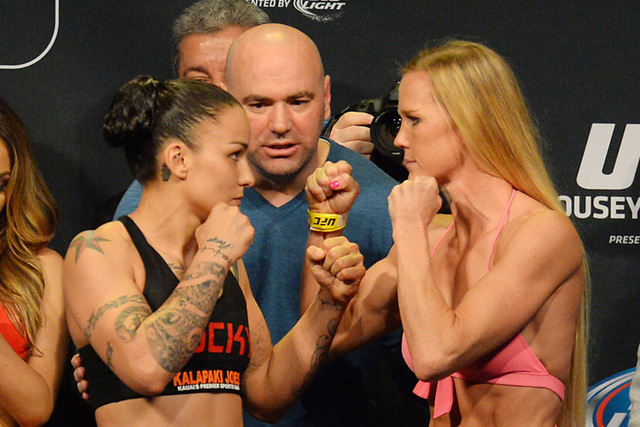 A breakdown of the fights on the main card of UFC 184 today at Staples Center in Los Angeles:

■ STORYLINE: Much has been made of the assertion that Zingano will be Rousey’s toughest opponent to date. That might be technically correct. The problem with the claim, however, is that Zingano’s strengths don’t match up well with Rousey’s game. Zingano is best in the clinch, a position Rousey absolutely dominates. Getting that close to Rousey also exposes Zingano to Rousey’s unrivaled assortment of throws and tosses. Zingano is also a notoriously slow starter. In both of her UFC fights, she has been in trouble early only to rally for late victories. That type of heart is admirable, but Rousey doesn’t let opponents off the hook. If she has someone in trouble, she finishes. Zingano continues to insist she is ready for the moment, and her demeanor this week backs that up. But it’s entirely different when Rousey steps into the cage and starts stalking. Nobody has shown the ability to handle that, and Zingano isn’t likely to be the one to finally do it.

■ STORYLINE: Since even before she signed with the UFC, Holm has been hyped as a potentially legitimate challenger for Rousey. She is an accomplished professional boxer who has quickly taken to mixed martial arts under the tutelage of famed trainer Greg Jackson. This is essentially a showcase bout with the hope that Holm can put on a spectacular performance and create interest for a fight against Rousey. Pennington is tough, though. She is well aware of the situation and would like nothing more than to spoil the plans. That motivation might not be enough. Pennington doesn’t mind a slugfest, and Holm, probably the most fundamentally solid striker in the sport, is likely to oblige. Pennington’s toughness probably won’t be enough, but it should make the fight fun to watch.

■ STORYLINE: Both fighters have wrestling backgrounds, but have fallen in love with power punching as their careers have progressed. Neither is in particularly good form at the moment. Ellenberger has lost three straight fights, with the most recent coming by first-round submission against Kelvin Gastelum in November. Koscheck also has lost three straight fights but hasn’t competed since November 2013. While those similarities exist, these two appear to be at different points in their careers. Ellenberger has been mixing up his training camps and trying to figure out how to regain the form that saw him win eight of nine fights before his current losing streak. On the other hand, there has been speculation about Koscheck pondering retirement. While he denies that, his last two losses have come by first-round knockout. Expect plenty of fireworks in a short amount of time in this fight.

■ STORYLINE: Jouban and Walsh are getting a huge opportunity to compete on the main card of a pay-per-view event after suffering controversial decision losses in hostile territory in their previous bouts. Walsh, an Australian who competed on the international version of “The Ultimate Fighter,” lost a split decision to Kiichi Kunimoto in Japan on Sept. 20 to snap a six-fight winning streak. Jouban lost to Warlley Alves in Brazil on Nov. 8. Now, Jouban gets the home-cage advantage. He lives in Los Angeles and was an actor and model before taking up MMA full time. Jouban is the flashier of the two fighters, while Walsh is more of a grinder. Walsh will look to control the fight with takedowns or in the clinch along the cage. He just might be able to do it enough to score the upset.

■ STORYLINE: Tibau is an incredibly consistent fighter. He’s strong and uses that strength to neutralize his opponents. He will look to slow Ferguson here. Ferguson is an aggressive striker who keeps getting better. He is 7-1 in the UFC, with the loss coming to Michael Johnson. Expect Ferguson to extend his winning streak to five in this one by using his length and speed to batter Tibau from a distance. Should Tibau get inside, Ferguson is talented enough to deal with it, but it’s not likely to happen. While Ferguson is more than capable of ending this early, Tibau seems to take every fight the full three rounds, win or lose. This should be no exception.