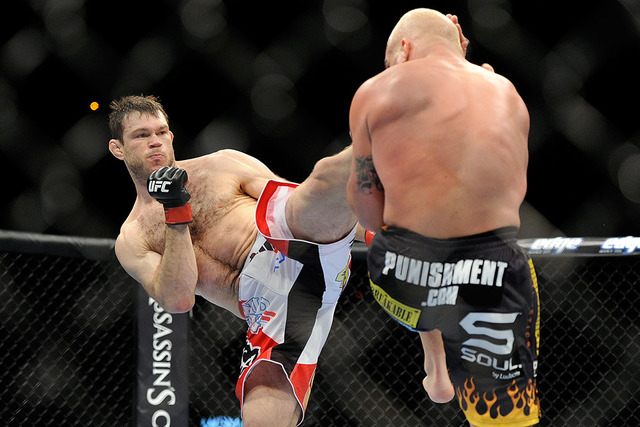 Forrest Griffin, shown against Tito Ortiz in 2012, now works as a performance consultant for the UFC and helps fighters understand the right way to cut weight, something he said he didn’t know during his career. (AP Photo/David Becker) 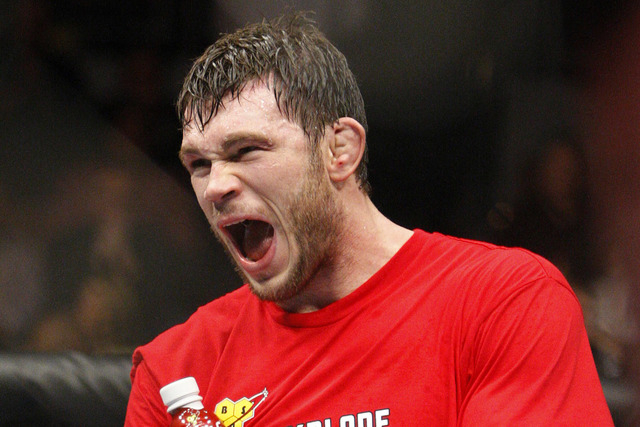 Forrest Griffin now works as a performance consultant for the UFC and helps fighters understand the right way to cut weight, something he said he didn’t know during his career. (John Locher/Las Vegas Review-Journal File) 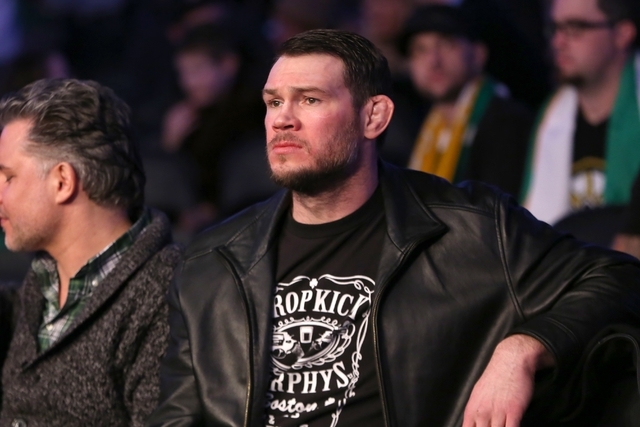 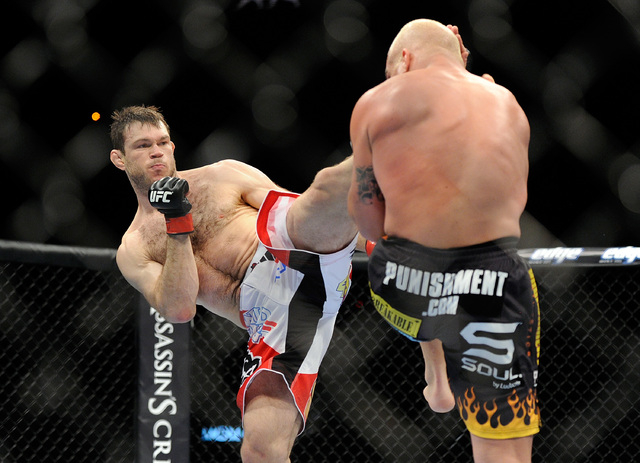 Forrest Griffin, shown against Tito Ortiz in 2012, now works as a performance consultant for the UFC and helps fighters understand the right way to cut weight, something he said he didn’t know during his career. (AP Photo/David Becker)

It was also during that time he learned about cutting weight from two of his competitors in the house who had experience in the practice.

“I was so bad at it that Bobby Southworth and Josh Koscheck taught me how to do it on the show, and I’m still grateful for that,” Griffin said. “I used pretty much what the two of them taught me for the rest of my career. Before that, I’d done a couple cuts where I really had no idea what I was doing. I wasn’t eating and just working out incessantly. I was doing everything wrong, and it’s weird, I didn’t perform all that great.”

Not that Southworth and Koscheck were at the cutting edge of the field; they just knew more than Griffin. He says their methods were probably antiquated even for the time, but at least they were effective.

Griffin now works as a performance consultant for the UFC and offered a strong endorsement for the organization’s new weight management policy, a system of guidelines based on extensive research that is being implemented throughout the year.

Several athletic commissions are reviewing protocols for weigh-ins, but UFC officials wanted to be proactive with their new guidelines.

The new UFC headquarters in southwest Las Vegas, scheduled to open sometime in 2017, will feature an athlete health and performance center that will be staffed to provide weight management and nutrition plans for all fighters.

Along with increased education for athletes on proper weight-cutting techniques and rehydration methods during fight weeks and at athlete summits, the UFC has introduced a system of data collection and athlete monitoring of weight and vital signs that will enable the organization to create a database to track and analyze information on each fighter.

There is also a stipulation that all fighters, beginning the week of UFC 200, must be within 8 percent of their target weight when they check in for fight week, which generally occurs on a Tuesday before a Saturday fight.

A fighter who doesn’t fall within that range is subject to daily monitoring of weight and vitals throughout the week and will be required to attend weight management counseling before his or her next fight.

“The only hard and fast rule in there, and I think it’s probably the most important thing in terms of the guidelines, is that 8 percent number,” said Jeff Novitzky, the UFC vice president of athlete health and performance. “If they’re not, it’s not in the rules the fight won’t happen, but we sure are going to pay very close attention to them, including taking daily weight, daily vitals, and as it progresses, if they show signs of being dehydrated, they will be pulled from the fight.”

Novitzky said fighters are generally coming in under that number already, especially since an IV ban went into effect in October. In the past, fighters knew they could rehydrate with the use of an IV immediately after weigh-ins. That practice was banned as part of the UFC’s anti-doping policy, but Novitzky said it also has impacted weight cutting.

“It had a very surprising side effect in that it helped curtail extreme weight cuts,” he said. “You also see a whole bunch of fighters employing the services of nutritionists, so they are being smart about managing their weight. And the UFC is trying to provide as much as we can for the fighters that can’t afford a nutritionist. We’ve consulted with experts who have told us, ‘Hey, here’s the optimal things you want to be eating or drinking 24 hours before your fight, after the weigh in.’ So we provide that for the fighters.”

That’s in the form of a selection of drinks and food available to fighters after weigh-ins that were selected in consultation with the United States Army Research Institute of Environmental Medicine.

“I wish I would have had that,” he said. “I was just guessing and drinking Pedialyte. Ironically, Pedialyte is not that bad. But there are better ways, and now that’s provided for the fighters, so that’s something I’m pretty happy with.”

There is also now a fight-night room where athletes can pick up approved snacks and beverages. It was approved by the Nevada Athletic Commission for UFC 196 in March, and each of the jurisdictions that has hosted events since then have followed suit.

“That’s a brand new thing the fighters are just loving,” Novitzky said. “To my understanding, that had never been done. The only thing previously that was allowed in the locker room was sealed bottled water. Again, talking with experts and people in other sports, there was no other sport where an athlete wouldn’t be allowed to consume beverages and eat things leading right up to the competition.”

Novitzky knows no matter how much education and scientific data is provided, athletes aren’t likely to change their ways unless they see a competitive benefit.

“Most of these athletes believe they’re bulletproof,” he said. “But when eyes open and ears really perk up is when you start talking about performance. You can say, ‘Hey, look, not only is it not good for you, but if you do it this way with these extreme, rapid weight cuts, your performance is going to suffer.’

“The anecdotes that I get after fight nights are all based on that where you hear, ‘Wow, you’re right. I really did feel better, had more energy, felt like I had more legs.’ It’s very encouraging to hear that.”

Dr. Robert Kenefick, a research physiologist for USARIEM, has worked with the UFC on the policy. He said there is reason to believe fighters’ performances have been impacted by dehydration and poor weight cutting.

“When you start to lose greater than 4 percent mass, it definitely impacts aerobic activity, and there’s some evidence out there to suggest also anaerobic activity like power and strength can be impacted,” he said. “Their sport really takes a lot of different energy systems into account, so they’re doing very short-term one- to three-second burst-type movements, but at the same time, they’re doing round after round that are minutes long, so there is an endurance or aerobic capacity.

“There’s strong evidence to suggest their performance is going to be impacted.”

“When I fought in Denver, I came in Wednesday and I wasn’t acclimated to the altitude, and then I had a really hard cut,” he said. “Being the genius I am, I sat in the hot tub for like three hours to make weight, and I felt like jello the next day.”

That was before Griffin reached the UFC. With the new guidelines, the organization hopes those types of stories remain a relic of the sport’s early days.