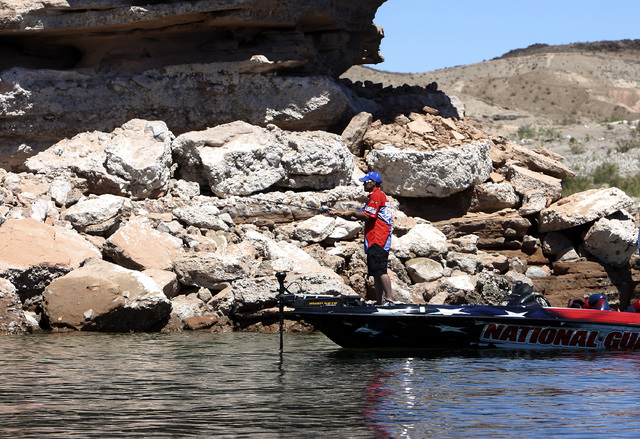 LAKE MEAD — With temperatures reaching triple-digits, anglers are finding night trips on the water to be working out well. The most productive times are just after sunset and again at dawn. With the new moon on June 16, anglers will have increased opportunity for fishing at night under a light. Live gizzard shad has been the top bait although some anglers have reported that netting them has been a little more difficult than in days past. The average size of striped bass hauled in by fishermen has been 3 to 4 pounds. Schools have been hanging out at a depth of about 40 feet.

LAKE MOHAVE — Largemouth and smallmouth bass have been the top target species on the lake as of late. Smallmouth can be found near rocky outcroppings and can be taken with drop shot rigs. Largemouth bass have been caught on plastic imitations and jigs near submerged brush. Catfish are hitting on anchovies or chicken lures, primarily at night in the backs of coves. Striped bass action has improved and anglers are finding success across from Cottonwood Cove as well as near Katherine Landing. Willow Beach Marina reports another double digit striper weighing 17.2 pounds. It was caught at mile marker 44 on an AC Plug.

LAUGHLIN — The fishing opportunity is getting hotter right along with the temperatures. The waters near Davis Dam have held many stripers and the occasional catfish that anglers are catching while using anchovies as bait. The average weight is about 2 to 3 pounds. Casino Row has been giving up both striped bass and catfish. One young angler brought in a catfish weighing 10.4 pounds while fishing with anchovies near the Nature Center.

URBAN PONDS — With Free Fishing Day slated for Saturday, anglers won’t have to go any further than their favorite urban pond for a successful day of fishing. Anglers have been catching stocked catfish with hot dogs, stink baits and night crawlers. Bluegill sunfish provide exciting and sometimes fast-paced fishing that can hold the attention of occasionally impatient anglers. Mealworms, night crawler pieces and corn can entice these scrappy fish. While no one needs a license on Free Fishing Day, all other fishing regulations still apply. Keep in mind there is a three-fish limit on game fish at each of the local ponds. Please dispose of your discarded fishing line properly.

KIRCH WILDLIFE MANAGEMENT AREA — Unsettled weather patterns have made fishing difficult for the past several weeks. That said, anglers have found excellent fishing during periods of calm. Anglers have found good fishing for largemouth bass while using jigs and crankbaits. Thunderstorms are predicted to continue through Friday with varying degrees of intensity. Anglers launching boats at Haymeadow and Cold Springs reservoirs are advised to stay close to the northern edge of the cattails as the entry channel is shallow.

EAGLE VALLEY RESERVOIR — Catch rate was fair over the weekend. Inclement weather and high fishing pressure may have been a factor. Anglers caught various trout species using PowerBait in rainbow coloration and small spinners. Weed growth is becoming an issue to contend with in some areas of the reservoir.

ECHO CANYON RESERVOIR — The hot fish in this water is the crappie. Anglers have had success using small white spinners. The trick is to keep the lure above the weed beds. Black bass species have not been especially selective and are hitting on crankbaits and plastic imitations. Both species are hitting flies such as the Prince Nymph and the Woolly Bugger. A chance of thunderstorms on Friday should give way to clear skies Saturday. Just in time for the free family fishing derby sponsored by the park for Free Fishing Day. With plenty of available shoreline, all anglers are invited to join in. Though no fishing license is required, all other regulations still apply.