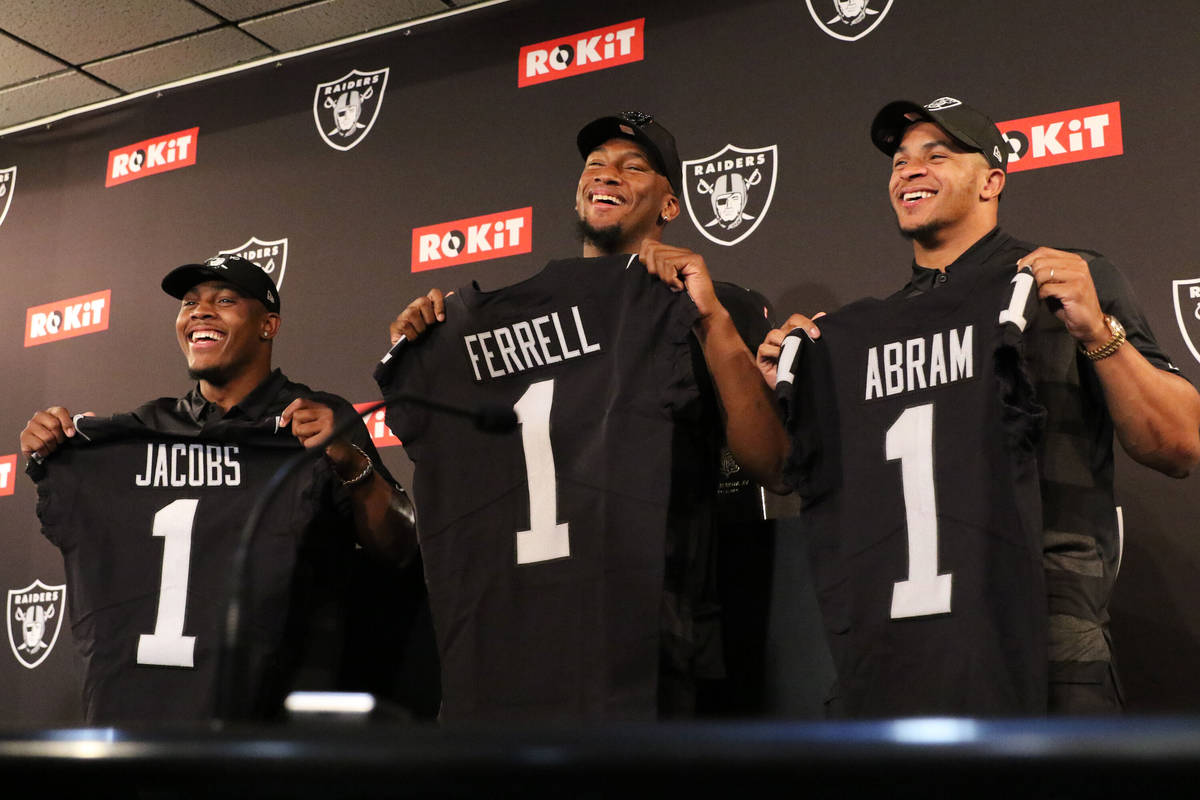 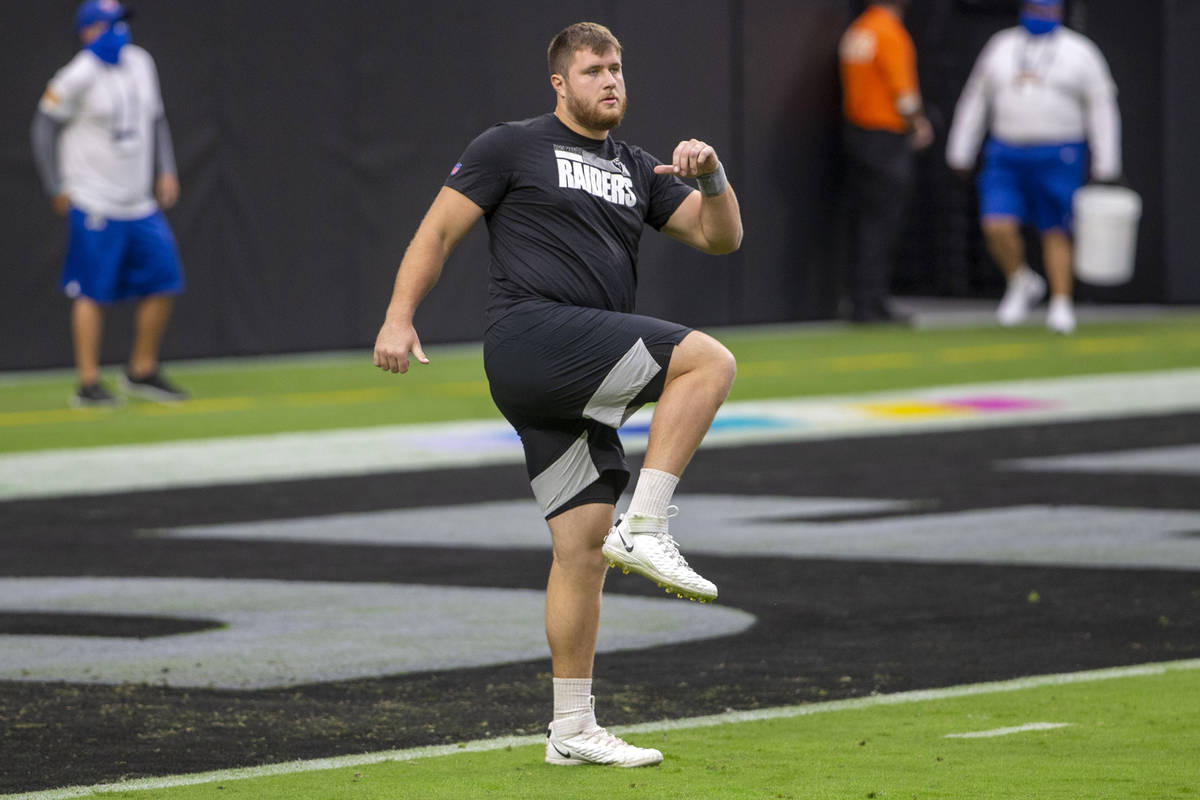 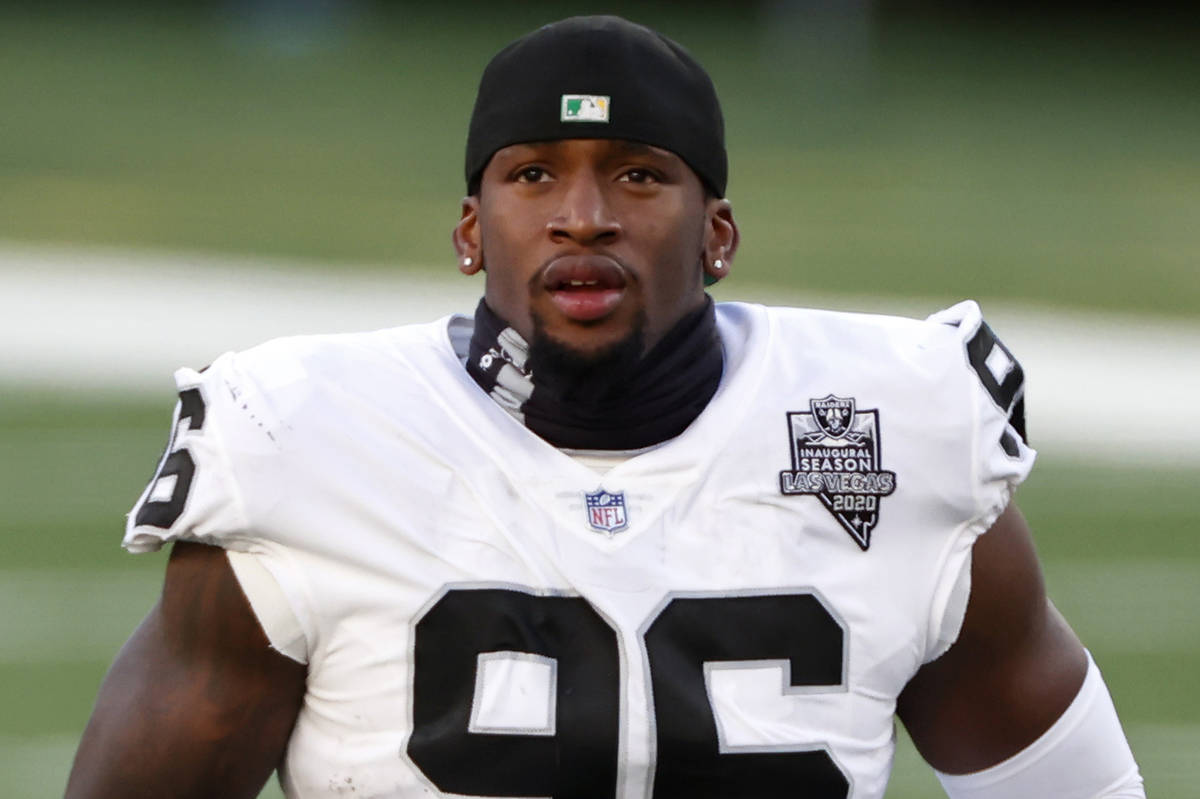 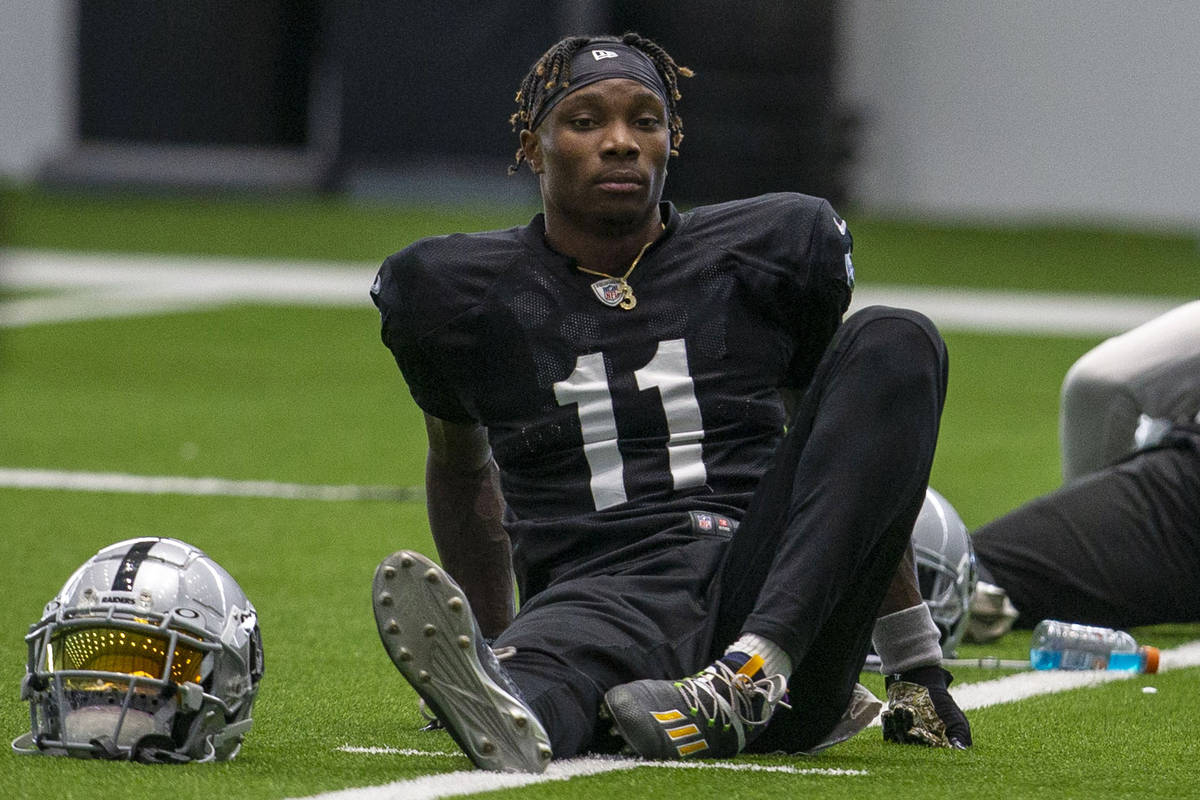 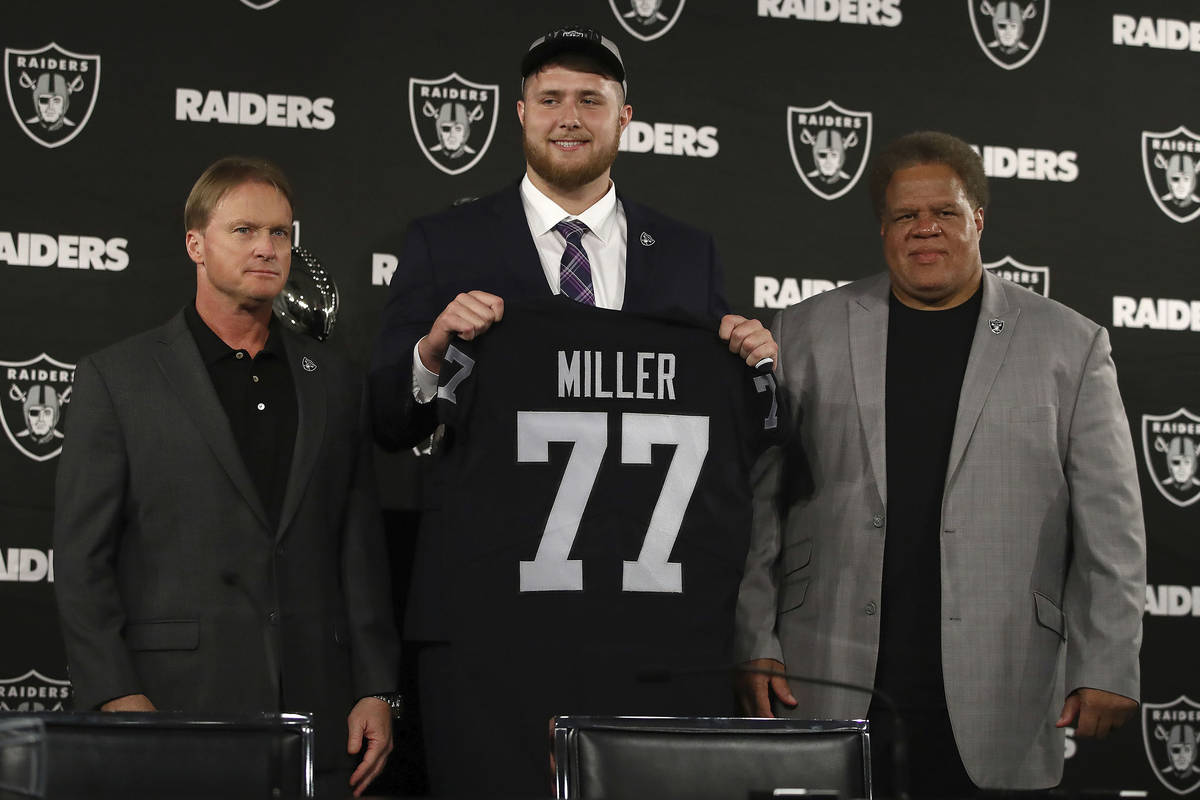 Coach Jon Gruden has had three drafts since returning to the Raiders, two since Mike Mayock left a media career to work alongside him as general manager.

There have been more misses than hits.

Running back Josh Jacobs made the lone Pro Bowl appearance of the 25 players selected since Gruden returned. But there is still plenty of time to change the narrative.

Seventeen of the picks remain on the roster and help form the foundation of what Gruden and Mayock believe will be a contending team for years to come.

While it’s too early to make a final judgment, it is possible to grade Gruden and Mayock’ performance in the draft thus far.

1 — Kolton Miller, OT: (A) After a slow start, he has improved every year and was just locked into a long-term deal to be the anchor of the offensive line.

2 — P.J. Hall, DT: (C) It’s not that Hall was ever a bad player. He had two serviceable seasons before he was shipped out after coming to training camp out of shape and didn’t play well for the Texans in 2020.

3 — Brandon Parker, OT: (B-) He has been a valuable asset on the offensive line as a starter and a reserve and figures to be in the mix to start at right tackle this season. He gets docked because linebacker Fred Warner went five picks later to the 49ers and star tackle Orlando Brown was still on the board for the Ravens to select later in the round.

3 — Arden Key, DE: (C) One of the more frustrating picks of the last few seasons, Key often appeared close to breakout performances that never seemed to happen. In Key’s three years with the Raiders, the team was last in the league in pressures and sacks.

4 — Nick Nelson, CB: (D) Played in 12 games, including three starts, in two seasons and was waived before the start of the 2020 season without making much of an impact. He signed a futures contract with the Colts in January.

5 — Maurice Hurst Jr., DT: (B) The Raiders were rewarded for taking a chance on Hurst despite medical red flags. Hurst showed occasional flashes of the talent that had him viewed as a potential first-round pick. He graded out well as a rookie and improved every year, though he was released this month.

5 — Johnny Townsend, P: (D-) The Raiders drafted a punter who wasn’t able to win the job in training camp a year later.

6 — Azeem Victor, LB: (F) Victor was waived before the season and spent time with the practice squads in Seattle and Tampa Bay, though he hasn’t played an NFL down.

7 — Marcell Ateman, WR: (B-) He has 20 catches and a touchdown in 18 games, including six starts, with the Raiders. Ateman is still a part of the organization as he enters his fourth season after being picked in the seventh round, which is no small accomplishment.

1 — Clelin Ferrell, DE: (B+) Much of the criticism of Ferrell has been about the expectations created by his draft position and his sack numbers. That’s not entirely fair. Ferrell has been a three-down asset and took a big step forward in his second season while playing several positions.

1 — Josh Jacobs, RB: (B-) It’s not ideal to draft a running back in the first round in today’s NFL, so it would be difficult to earn an A for this pick. Jacobs has been a very good player, as advertised. He still has a long way to go as a pass receiver, and his bruising style often leads to nagging injuries that slow him down.

1 — Johnathan Abram, S: (D) Abram missed nearly his entire rookie season after suffering an injury in his first game and then ranked No. 94 out of 94 qualifying safeties in 2020 by Pro Football Focus. His value extends beyond the numbers because of his leadership ability, but the Raiders need him to play with more discipline and focus.

2 — Trayvon Mullen, CB: (B+) Mullen has had some ups and downs over his two seasons, but he has made 26 starts and is a key piece of the team’s defensive foundation. He has shown plenty of positive signs, just not consistently enough. His grade must also reflect his standing relative to the other 31 corners drafted in 2019, making it tough to place Mullen outside the top three.

4 — Maxx Crosby, DE: (A+) There is room for Crosby to improve as an all-around defensive end, but his 17 sacks are the most of any player in the 2019 draft class. He has been by far the most impactful player to come out of the fourth round that year at any position.

4 — Isaiah Johnson, CB: (B-) Johnson’s two seasons thus far are best remembered for his consecutive pass breakups in the end zone to ensure a victory against the Chargers in the team’s first trip to SoFi Stadium. Those plays have been few and far between, but he is a key depth piece and a solid contributor on special teams.

4 — Foster Moreau, TE: (B) His offensive production took a step backward in his second season as he lost reps to veteran Jason Witten. Moreau, however, was able to use that year to learn more about playing the position. As a result, he should thrive as the primary backup to Darren Waller while continuing to make a big impact on special teams.

5 — Hunter Renfrow, WR: (A) Renfrow has established himself as the preferred third-down target for Derek Carr, racking up 105 catches and six touchdowns in his two seasons.

7 — Quinton Bell, DE: (D) He never played a down for the Raiders and was waived from the practice squad midway through his rookie season. Bell played 94 special-teams snaps in five games for the Super Bowl-champion Buccaneers this season.

1 — Henry Ruggs III, WR: (B-) Fairly or not, Ruggs will always be judged against the other receivers taken in the deep 2020 class and he finished eighth in receiving yards among rookies last year. He did make a couple big plays in key wins, and a closer examination of the film indicates his impact was often felt in his ability to stretch the field for other players.

1 — Damon Arnette, CB: (C-) The selection of Arnette was viewed as a huge reach by draft analysts, so the pressure will be on him to live up to his first-round status. It didn’t happen in his rookie year. He was often injured and looked like a rookie when he was on the field. He does still have plenty of room to grow.

3 — Lynn Bowden Jr., RB: (F) He was traded in training camp before ever taking a snap for the Raiders. Whether it was because the Raiders realized they weren’t going to be able to fit a square peg into a round hole by moving him to a new position or if it was because of issues off the field, that just simply can’t happen.

3 — Bryan Edwards, WR: (C+)The big, physical receiver was a training-camp star and has all the signs of taking a big step forward in his sophomore campaign. For now, he can only be graded on his performance on the field. Edwards finished with 11 catches in 12 games, including three starts.

3 — Tanner Muse, LB: (D) Muse went on injured reserve and missed his entire rookie season. Even before that happened, there were signs he was struggling to settle into a position at the NFL level. Where he should succeed early in his career is on special teams.

4 — John Simpson, G: (C) Because of injuries to several starters, the former Clemson standout was forced to play 252 snaps in his rookie season, though he may not have been completely ready for such a role. He struggled particularly in pass blocking, but did show some positive signs when he was allowed to drive forward and use his size and strength in the run game.

4 — Amik Robertson, CB: (C-) A grade of incomplete is probably more fair to Robertson, who only played 35 defensive snaps and 35 more on special teams. He has a chance to take on a bigger role, particularly as a slot corner.

5
Raiders schedule has plenty of challenges on back end