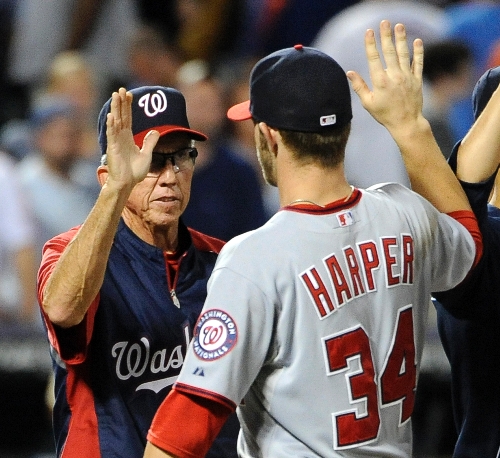 WASHINGTON – Washington Nationals center fielder Bryce Harper is 19 and looks and sounds the part, from his Mohawkish haircut to his tattoos and well-documented “clown question” ‘tude.

His manager, Davey Johnson, is 69 and looks and sounds the part, from his graying hair and leathery skin to the near-whisper speaking voice that delivers tales of chatting with Ted Williams about hitting.

Yes, Johnson and Harper were born a half-century apart. One’s the oldest skipper in the majors. The other put together the best season by a teenage hitter since the 1960s. Able to meet somewhere in the middle, and united by a supreme sense of self-confidence, they helped Washington build the best record in baseball in 2012 – and both figure to get plenty of attention when the club’s National League division series starts Sunday.

“Davey has such a young mindset, and Harp is such a throwback. It works,” said Nationals general manager Mike Rizzo, who selected Harper, the former Las Vegas High and College of Southern Nevada standout, with the No. 1 overall pick in the 2010 amateur draft, and turned to Johnson when then-manager Jim Riggleman abruptly resigned midway through last season.

“It’s an amazing relationship that they have. It’s a father-son, mentor-type of relationship,” Rizzo said. “There’s great respect on Harp’s part for Davey, and there’s great affection from Davey to Harp.”

Spend some time talking with Washington’s strong contenders for National League Manager of the Year and National League Rookie of the Year, and the mutual admiration comes through immediately, perhaps because they see similarities.

Between bites of a plate of berries, Johnson praised Harper – whose 22 homers this season are the second-most by a teen in big league history – as “a very smart young man,” and noted, “He’s not just talented; he studies things, which is really impressive.”

Harper relishes that Johnson, who won the 1966 and 1970 World Series as a second baseman with the Baltimore Orioles and managed the New York Mets to the 1986 championship, “raked and hit homers.”

“He’s been around the game for a long, long time. Everybody knows that – and everybody’s going to listen to him,” Harper said. “That’s huge for the whole team.”

Harper also gets a kick from the way Johnson – the last ballplayer to get a hit off Hall of Famer Sandy Koufax – sounds like an old-timer while yelling, “Whack-o!” in the dugout after one of the Nationals drives a ball over the wall.

“Every time he says that, when we hit a homer or something, everybody starts laughing. It’s from back when he played,” Harper said, chuckling at the thought. “He likes homers. Of course he does. Everybody does. But it’s relaxing to have a manager that is all for his team and lets you go through struggles and lets you play it out and lets you succeed.”

Their ages, both agree, are irrelevant.

“It’s not how old I am. It’s how I treat him every day,” Johnson said. “And he doesn’t want any special treatment. He wants to be treated just like everybody else.”

They first met several years ago, when Johnson was a guest speaker at a banquet and presented the still-in-school Harper with an award.

“You could sense a little cockiness about him,” Johnson said, an undercurrent of admiration in his words.

This is, after all, the manager who brazenly declared in spring training he deserved to be fired if the never-above-.500 Nationals didn’t reach the playoffs this year.

Not long after their initial encounter, Johnson was an assistant to Rizzo and wrote Harper’s name on a piece of paper submitted to commissioner Bud Selig at the amateur draft. Johnson got his first extended look at the kid from Nevada in spring training in 2011. By late last season, with Harper at Double-A Harrisburg, Johnson was convinced the player was ready to start 2012 in the majors, even if the college catcher still needed time to learn how to play the outfield.

Harper’s debut – and first hit, a double – came against the Los Angeles Dodgers on April 28, making him the youngest position player in the majors since Adrian Beltre in 1998.

By Harper’s fifth game, Johnson moved him to third in the batting order. He later settled into the second spot, behind Jayson Werth and in front of Ryan Zimmerman, and flourished.

It’s important not to get too caught up in the notion that Harper is tremendously successful for a teen. As Washington pursued its first National League East title down the stretch, he was among the best in baseball, no matter the age.

From Sept. 1 through the end of the regular season, the left-handed-hitting Harper – he throws right-handed, but swings lefty because he wanted to be like his older brother, Bryan, who’s a southpaw – led all NL players in runs (27), and ranked in the top eight in the league in slugging percentage (third, .643), batting average (tied for fifth, .330) and on-base percentage (eighth, .400).

“He’s pretty much got, in his mind, a bulletproof shield around him at all times,” Nationals first baseman Adam LaRoche said. “We see stuff every two or three days from him that’s just like, ‘Wow. I haven’t seen that in a long time.’ ”

Sometimes it feels as though Harper does something noteworthy every day – on or off the field.

Like the time he batted against the Reds with blood streaming from a gash above his left eye, which later needed 10 stitches, because he hurt himself slamming a bat against a wall on an 0-for-5 night. Or when his uniform belt snapped on a dive for a liner against the Mets, and Harper found himself hustling over to Washington’s bullpen to get a loaner. Or, most famously of all, when Harper – who is, of course, too young to legally drink alcohol in the United States, and also is Mormon – was asked by a reporter whether he has a favorite beer.

So was born a phrase that took off on Twitter and spawned T-shirts that Harper and Zimmerman each sported in the Nationals Park clubhouse in recent days.

The brashness that used to raise questions about Harper now draws praise.

“A lot of people on the outside, if they’re watching a guy like Bryce and only see him once a month, it might be like, ‘Man, that’s kind of tired. He’s going 1,000 miles an hour on a ball hit back to the pitcher?'” LaRoche said.

“But when you see it every day – that’s the only way he knows how to play the game. If we’re down three or four runs and Bryce turns a routine single into a double, it can fire some guys up. It’s motivating. He’s been a spark plug since the day he got up here, and I don’t think that’ll ever change.”

Johnson likes that about Harper, too.

“He’s really not a kid; he’s a man,” Johnson said, unveiling his toothy grin before delivering the punch line. “But he’s a kid to me.”