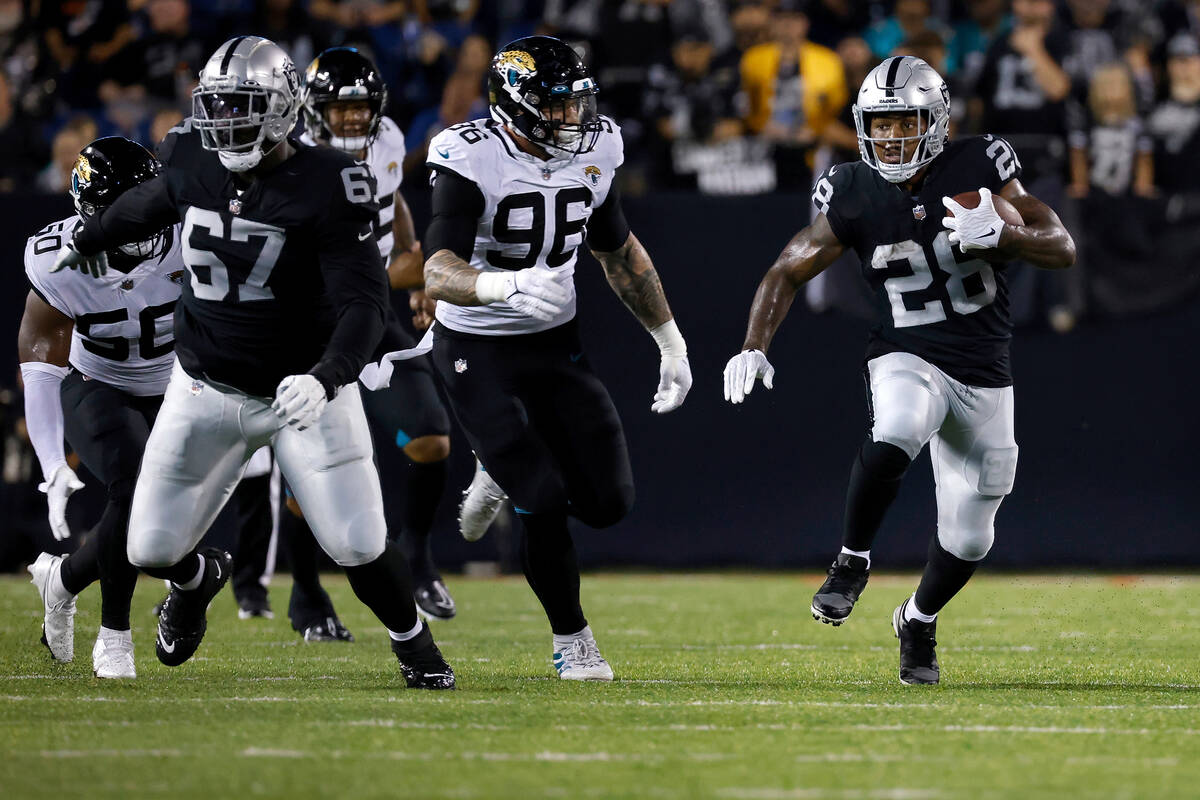 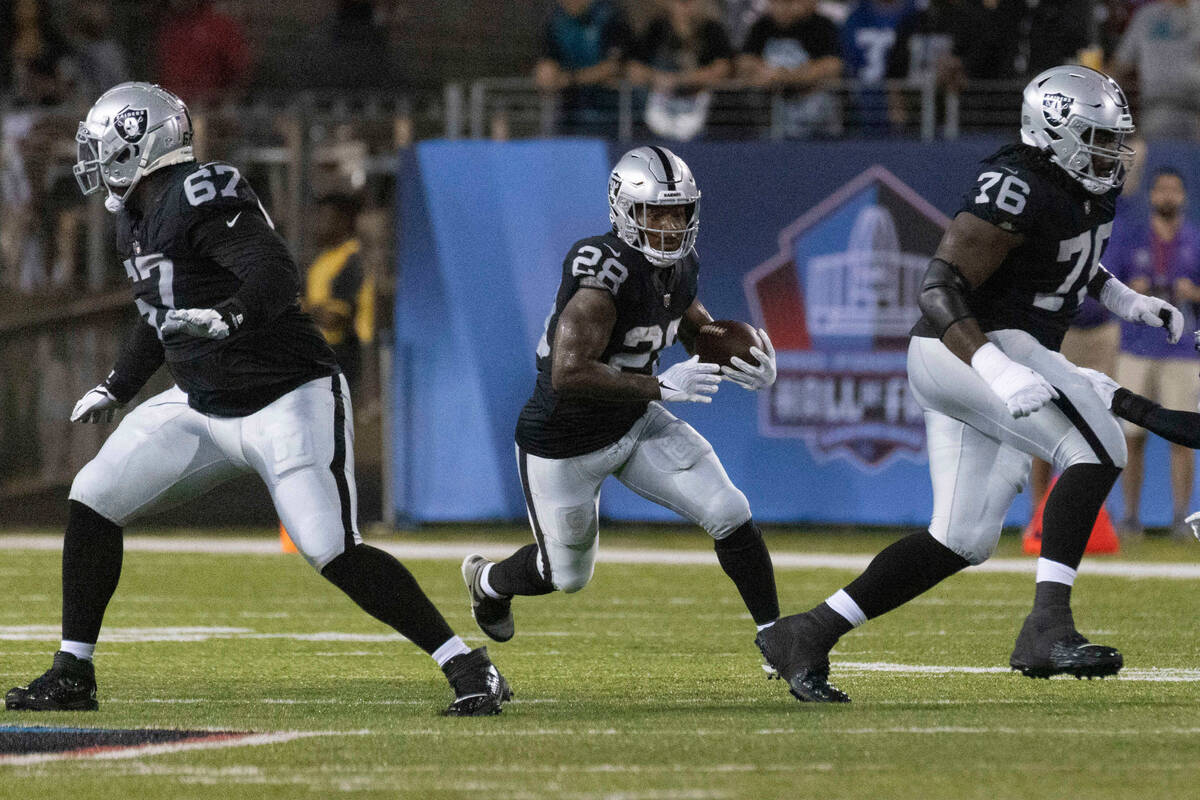 Raiders running back Josh Jacobs (28) rushes during the first half of the NFL Hall of Fame game against the Jacksonville Jaguars at Tom Benson Hall of Fame Stadium on Thursday, Aug. 4, 2022, in Canton, Ohio. (Heidi Fang/Las Vegas Review-Journal) @HeidiFang 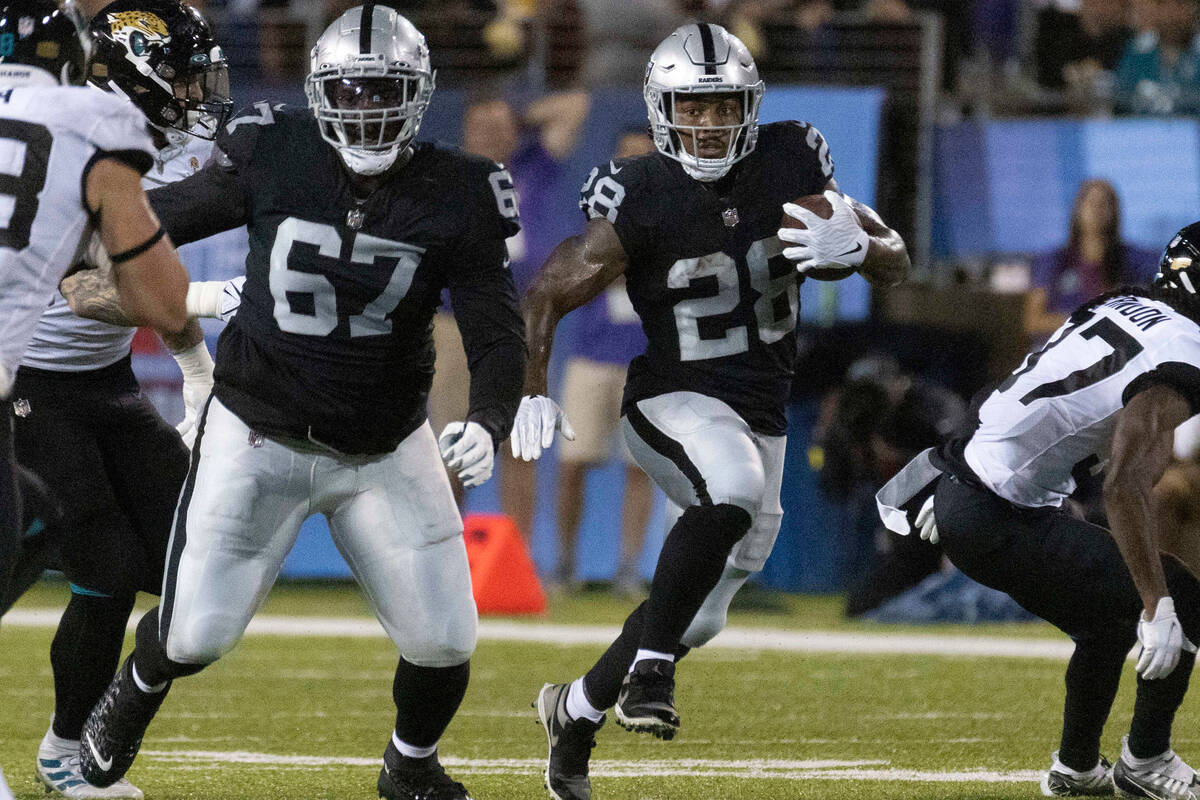 Raiders guard Lester Cotton Sr. (67) blocks as Raiders running back Josh Jacobs (28) finds more room to run against the Jacksonville Jaguars during the first half of the NFL Hall of Fame game at Tom Benson Hall of Fame Stadium on Thursday, Aug. 4, 2022, in Canton, Ohio. (Heidi Fang/Las Vegas Review-Journal) @HeidiFang

The Raiders’ decision to play Josh Jacobs extensive snaps in Thursday’s Hall of Fame game raised some eyebrows. After all, his offensive peers — Derek Carr, Davante Adams and Hunter Renfrow — all watched the game from the sideline, befitting their veteran status and coach Josh McDaniels’ intent to protect them from injury in a relatively meaningless exhibition game.

So why was Jacobs, a valuable veteran cog of the Raiders’ offense, on the field, let alone for a considerable time?

Turns out McDaniels had valid reasoning, or as he put it when asked: “We made the decisions that we thought were the right decisions for our team.”

And it had nothing to do with social media’s instant reaction suggesting the Raiders were showcasing Jacobs for a trade.

“I always think it’s good for backs to carry the ball in preseason,” McDaniels said simply.

As far as the showcasing theory, there is no feeling whatsoever that the Raiders are shopping Jacobs. In spite of the club opting against picking up the former Alabama standout’s fifth-year option, and thus opening the possibility of him leaving via free agency next March, he is viewed as an important piece of their 2022 puzzle.

Despite having quality depth at running back and the certainty that the Raiders will either trade or release an NFL-caliber running back, Jacobs is expected to return as the lead back.

In fact, by reporting to camp in top shape, and producing a dazzling start to camp, Jacobs has only reaffirmed his value.

What he means to the Raiders in the short and long term is an important consideration when contemplating any trade. The club is in win-now mode, and Jacobs factors in as a key component of the stout run game McDaniels wants to build.

Long term, even if Jacobs leaves as a free agent next year, the Raiders are likely to get draft-pick compensation, even as high as a third-round pick.

That can’t be ignored, as successful teams have been leaning heavily on the comp-pick game to help restock their rosters with young, affordable talent after letting higher-priced veterans leave in free agency.

The Raiders, now under the leadership of McDaniels and general manager Dave Ziegler, are well versed in that approach. The Patriots’ expert use of the comp-pick game helped them build and maintain a dynasty that covered multiple decades.

Down the line, Jacobs can provide that sort of value.

Presently, though, he means more to the Raiders as a player than a trade asset.

McDaniels, cognizant of the need to get Jacobs rolling and to develop chemistry with a young offensive line, used Thursday to expedite the process. In doing so, he displayed a thought process that, while unconventional in some quarters, reflects his own thinking and philosophies.

Specifically, it reflects how he views the running back position relative to training camp and preseason preparation.

“There are a lot of things that happen when you’re tackled and getting hit that you can’t simulate in practice,” said McDaniels, who has prohibited such hits during training camp.

That not only explains using Jacobs on Thursday but also his primary backup, Kenyan Drake. In fact, the only veteran back who didn’t get on the field was Brandon Bolden.

“All our guys either caught it or were handed the ball and got tackled,” McDaniels said. “We can’t really simulate or rep that in practice.”