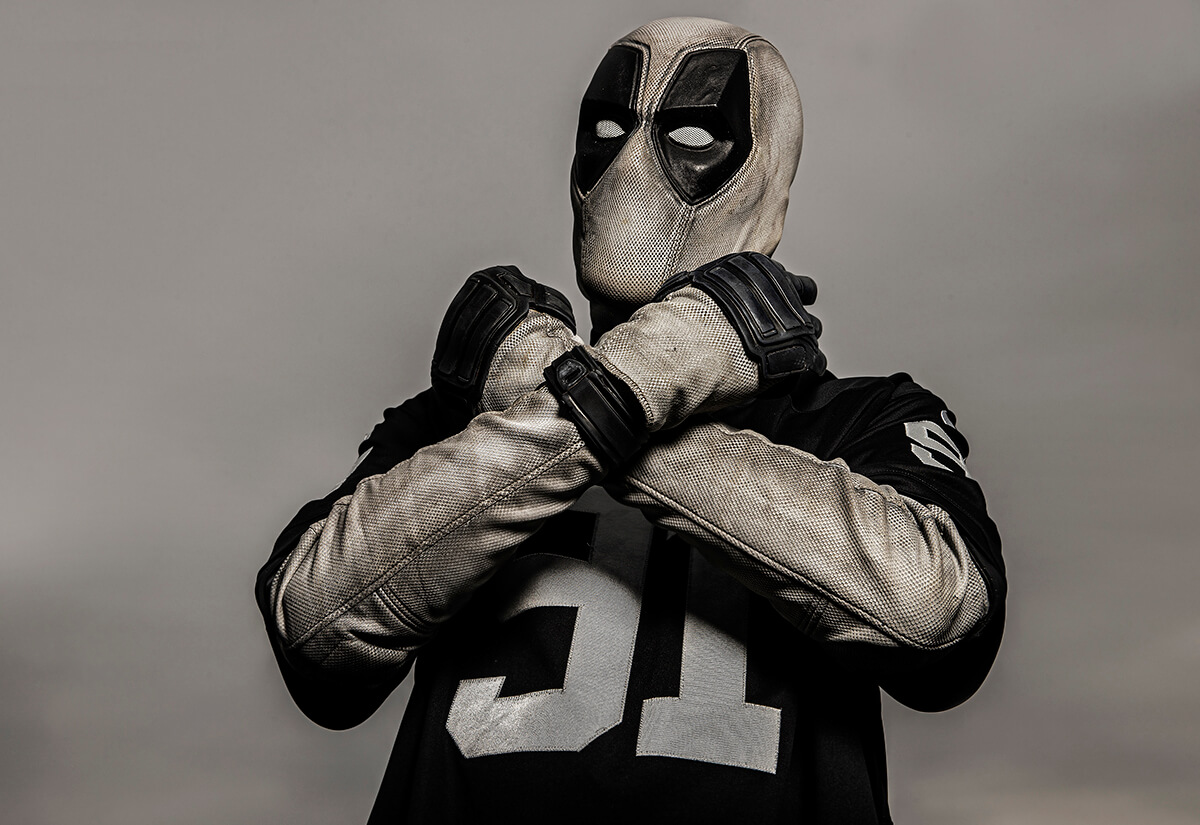 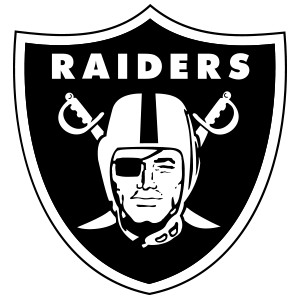 Moments before the Raiders take the field before each home game, as the lights dim and the players gather in the tunnel working themselves into a frenzied state, one of the best known hype videos in NFL history begins with the famous phrase, “The autumn wind is a pirate.”

The stadium erupts. A sea of silver and black, known around the world for their colorful, often intimidating dress, intense attitudes and a single-minded dedication to one team. They are Raider Nation.

Wayne Mabry, AKA “Violator,” a recent Hall of Fans inductee, is one of Raider Nation’s most well-known figures. He has been painting his face and slipping on spiked shoulder pads at 4 a.m. for the past 30 years.

“We’re a bunch of misfits from all walks of life … doctors, lawyers, teachers,” said Mabry. “But on game day we’re united under one shield.”

Mabry has inspired generations of new Raider Nation followers, including Kevin Guilford, AKA “Mob Boss.” Guilford, donning a reflective silver mask, Raiders hat and black blazer covered in colorful team patches, said his persona was created to honor his late father who religiously took him to Raiders games as a child.

“Raider Nation is a generational bond for many of us,” said Guilford. “Win lose or tie, we’re Raiders until we die.”

For some Raider faithful, that motto has taken on an entirely different level of seriousness. A member of Raider Nation known as “Raider Rita” was recently diagnosed with breast cancer and has used the platform to push the women of Raider Nation to schedule early screenings.

“With the support of Raider Nation, I know I will pull through and beat this,” she said.

The theme of family within Raider Nation is undeniable, and seems to bond people of all walks of life.

“While others see a tailgate, Raider Nation sees a family reunion,” said Deadpool Raider. “It’s all about giving back; from raising money for charities, helping the less fortunate, to embracing a newcomer on game day or putting a smile on a kids face.”

So the next time the Raiders sprint onto the field at Allegiant Stadium with the timeless words “The autumn wind is a pirate,” barely audible above the screams of 65,000 impassioned fans, know that one of those fans, Roger Leon, dressed to the nines as a ghostly sea captain, also goes by the name “Autumn Wind.”

And he is just one in the misfit army known as Raider Nation.

Top image: While others see a tailgate, Raider Nation sees a family reunion, says Deadpool Raider, who is from Dallas. 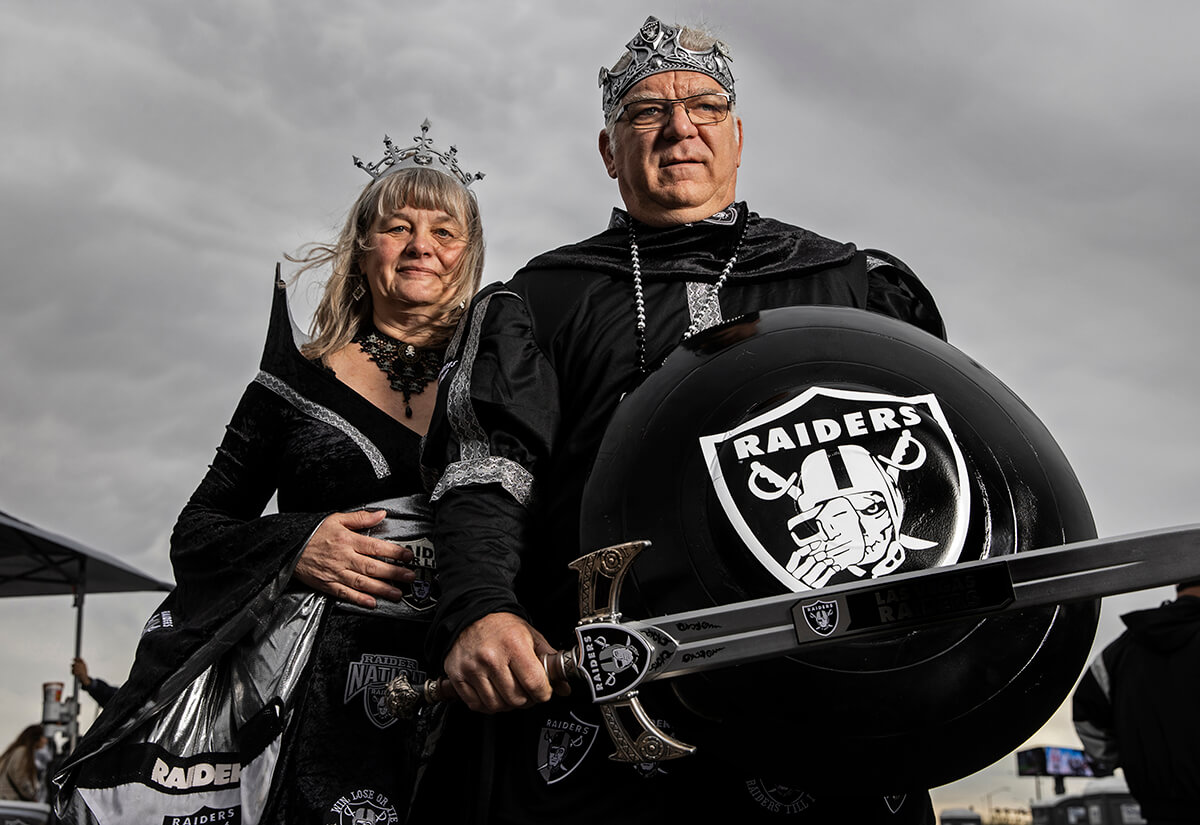 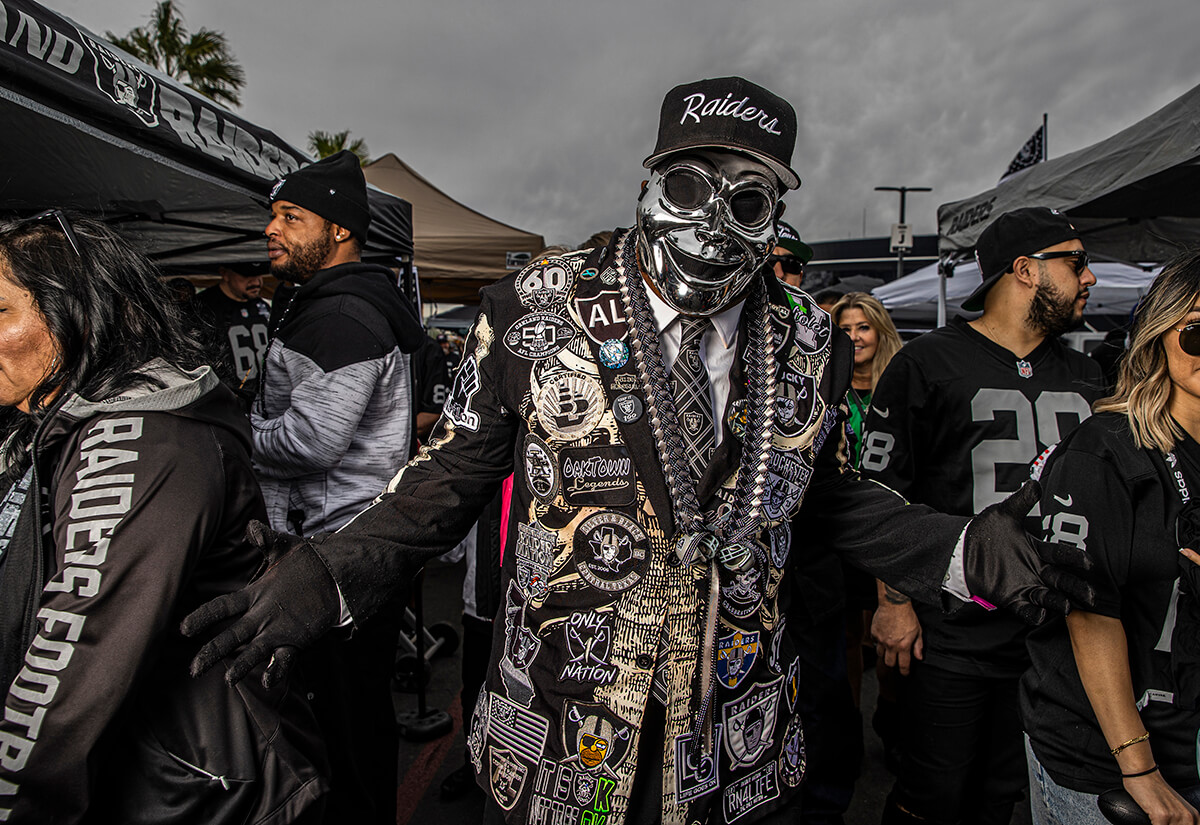 Kevin Guilford, AKA Mob Boss, is from Modesto, Calif. He said his persona was created to honor his late father who religiously took him to Raiders games as a child. 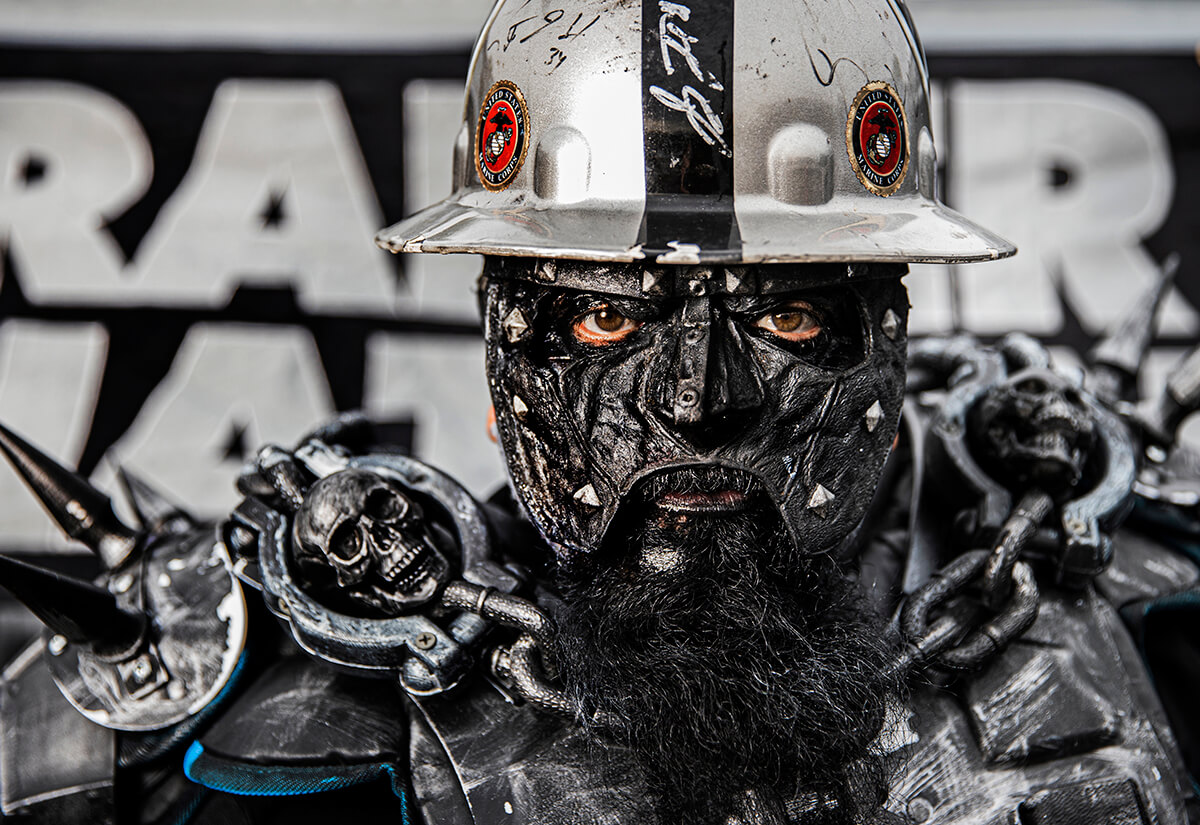 Javi is from Covina, Calif. 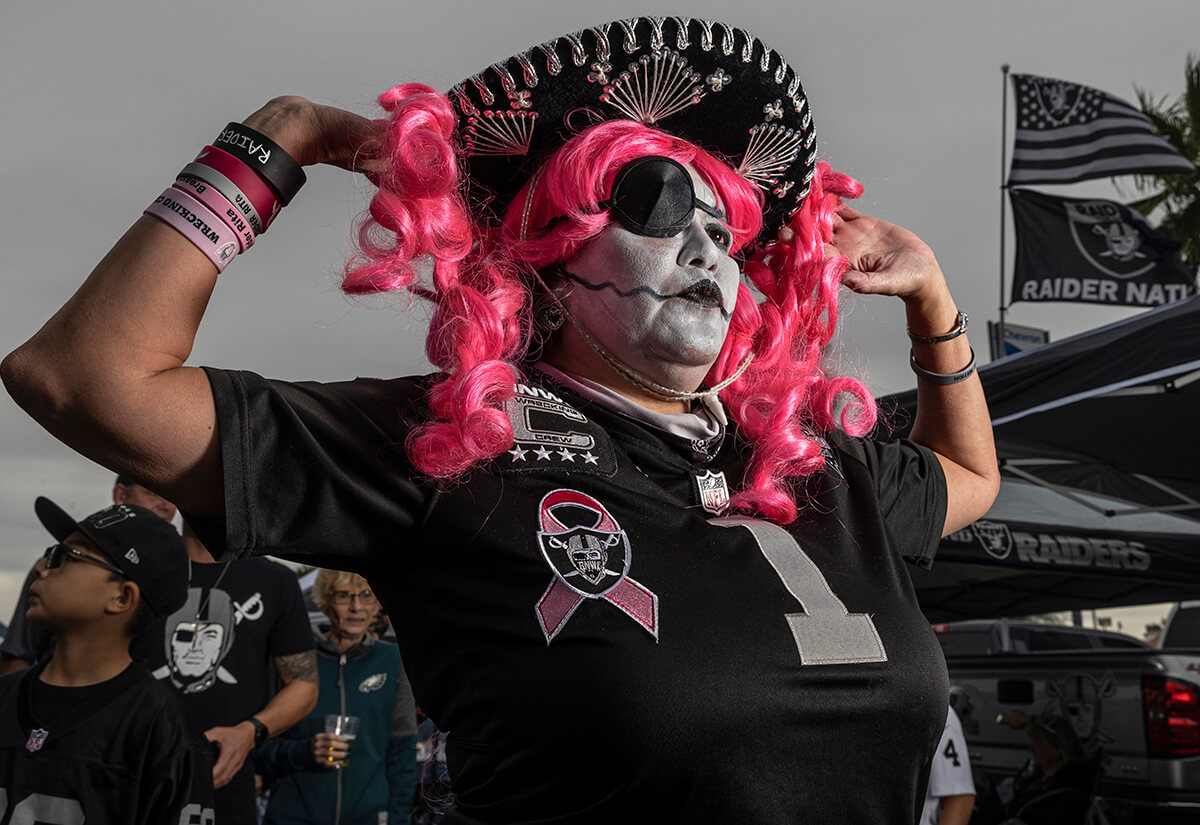 Raider Rita, who resides in Las Vegas, was recently diagnosed with breast cancer. She has used this platform to push the women of Raider Nation to schedule early screenings. 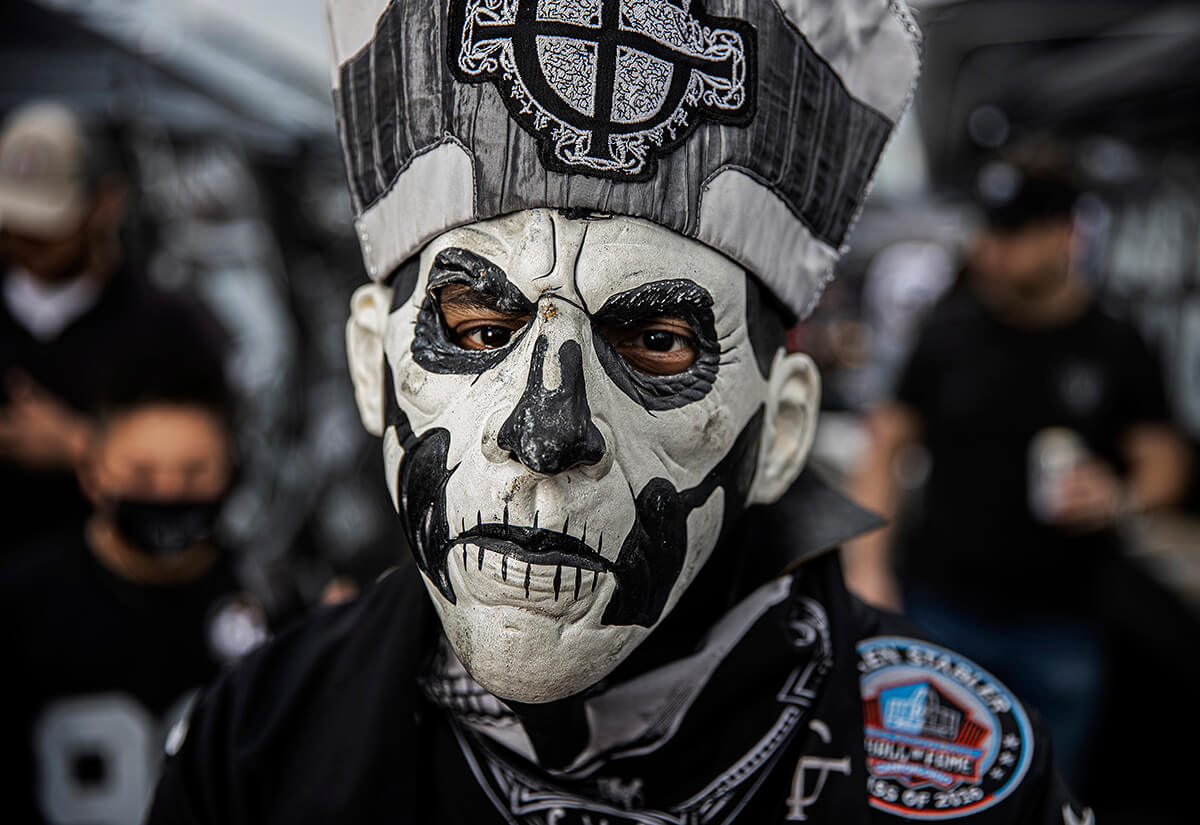 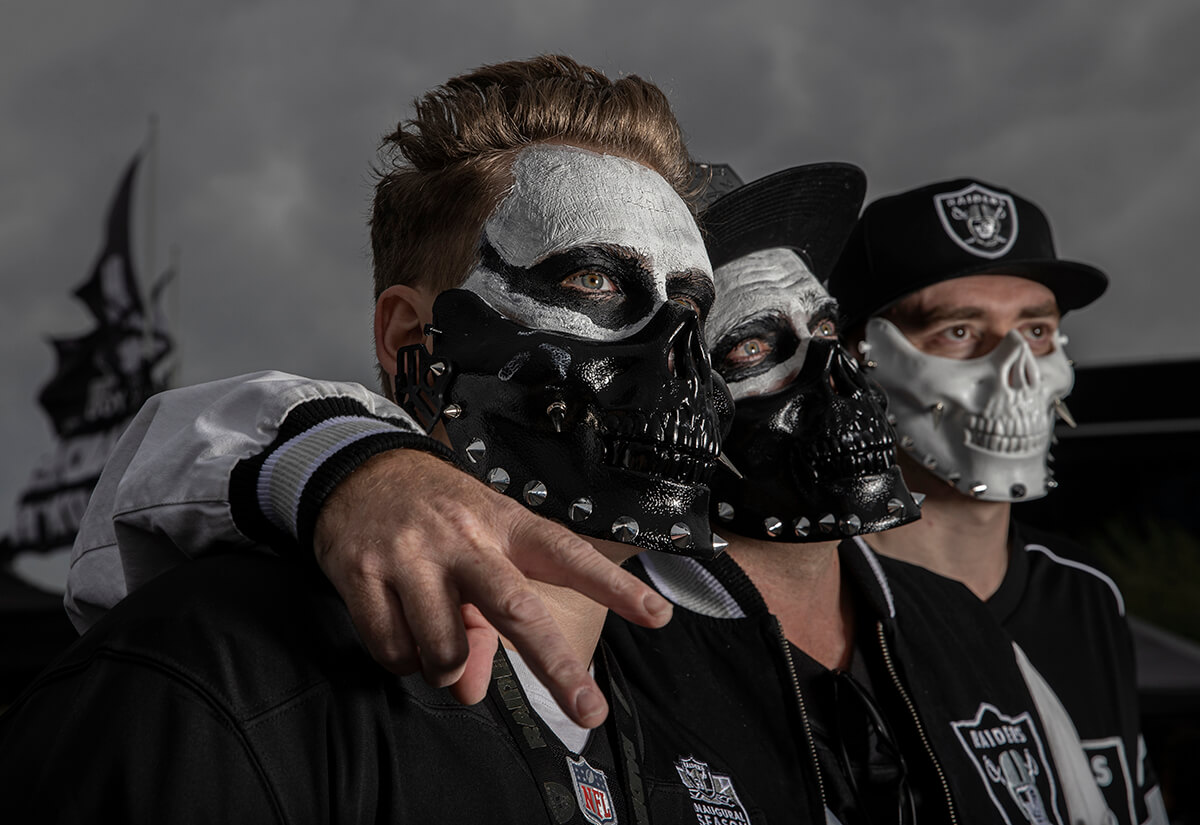 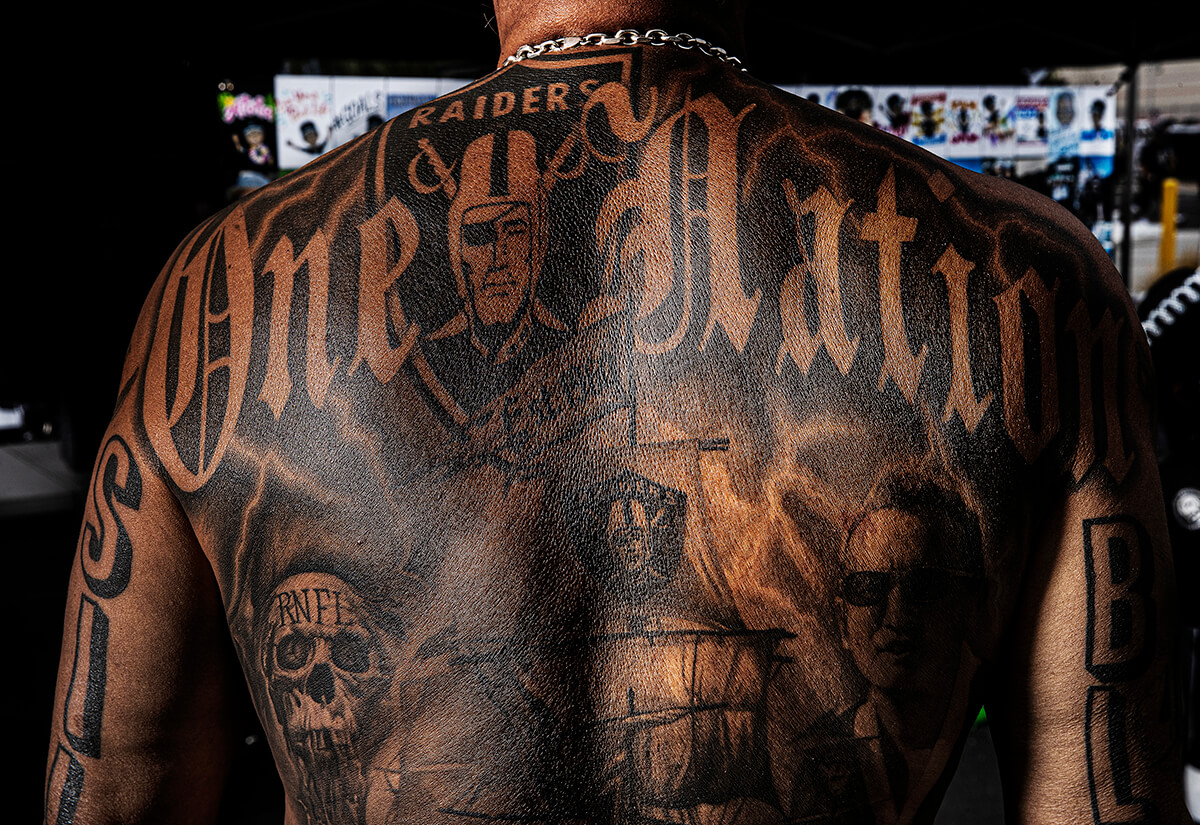 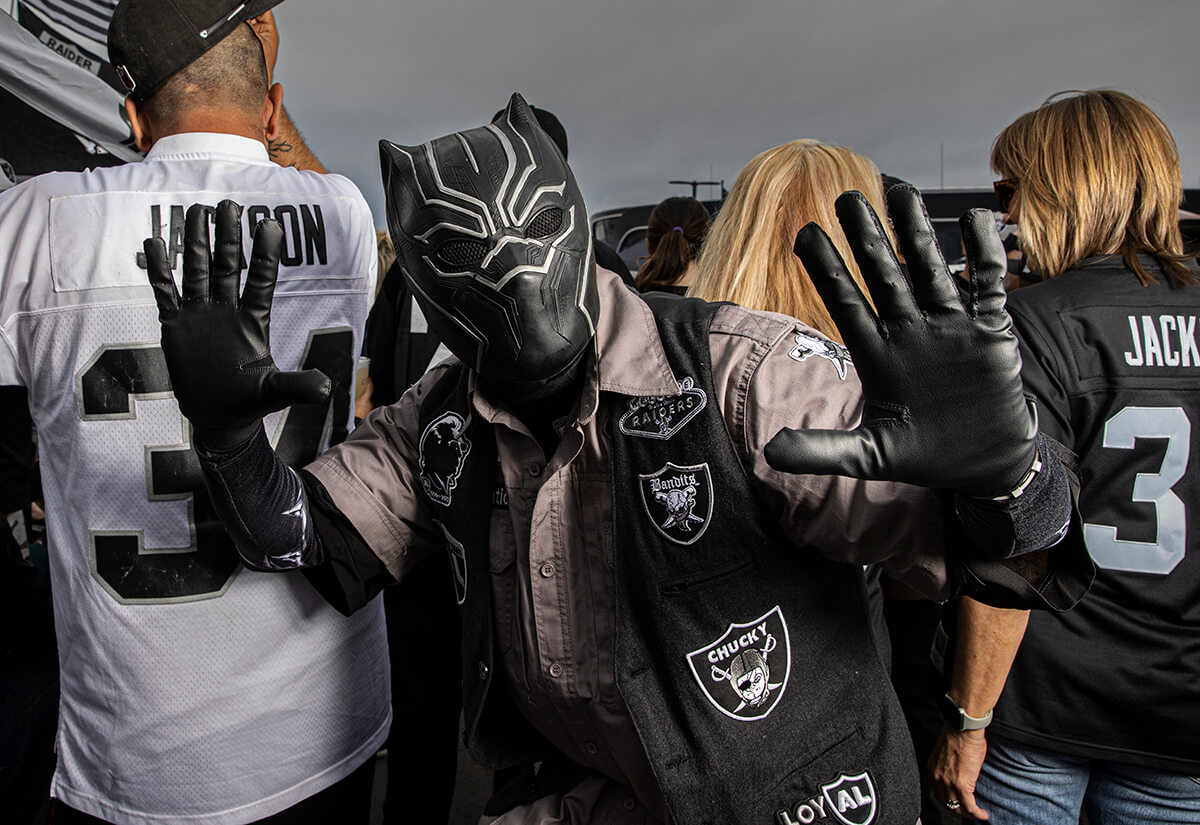 Reggie Currie is from Las Vegas. 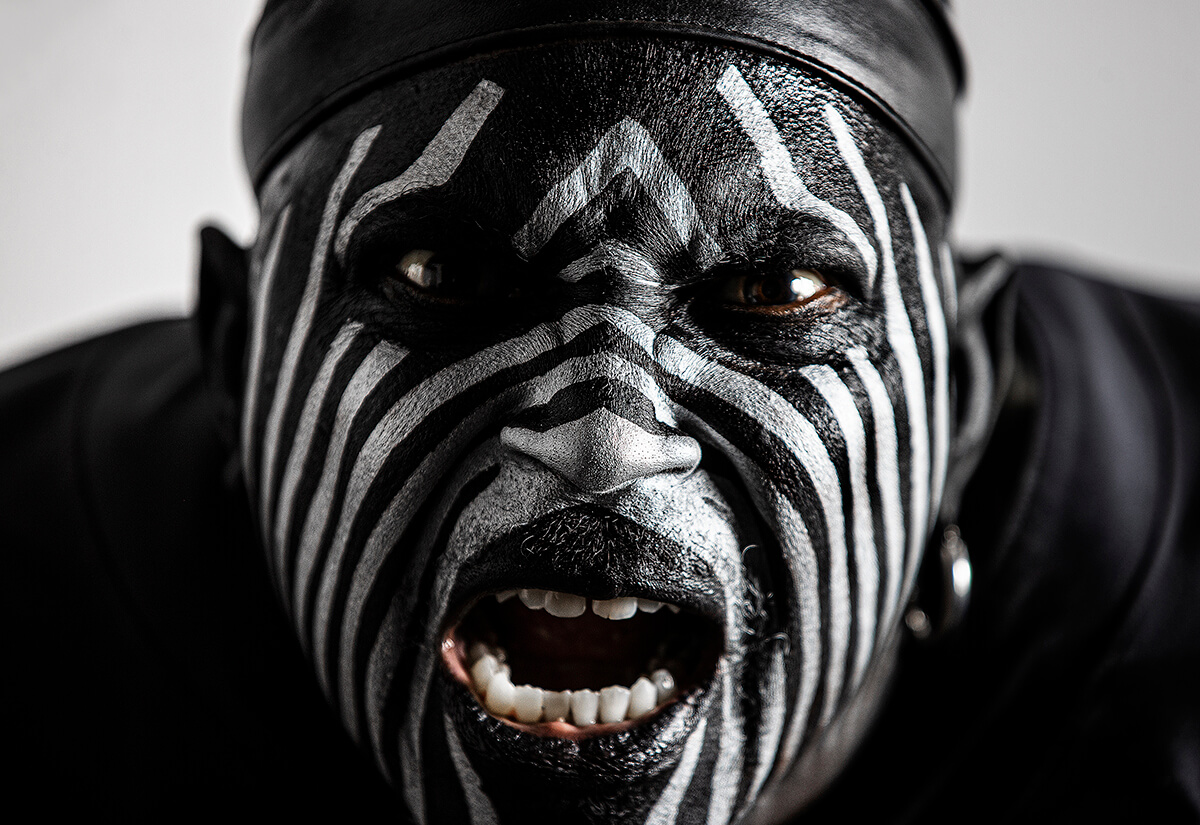 Wayne Mabry, AKA The Violator, a Hall of Fans inductee, hails from Moreno Valley, Calif. He has been painting his face and slipping on spiked shoulder pads at 4 a.m. for the past 30 years. 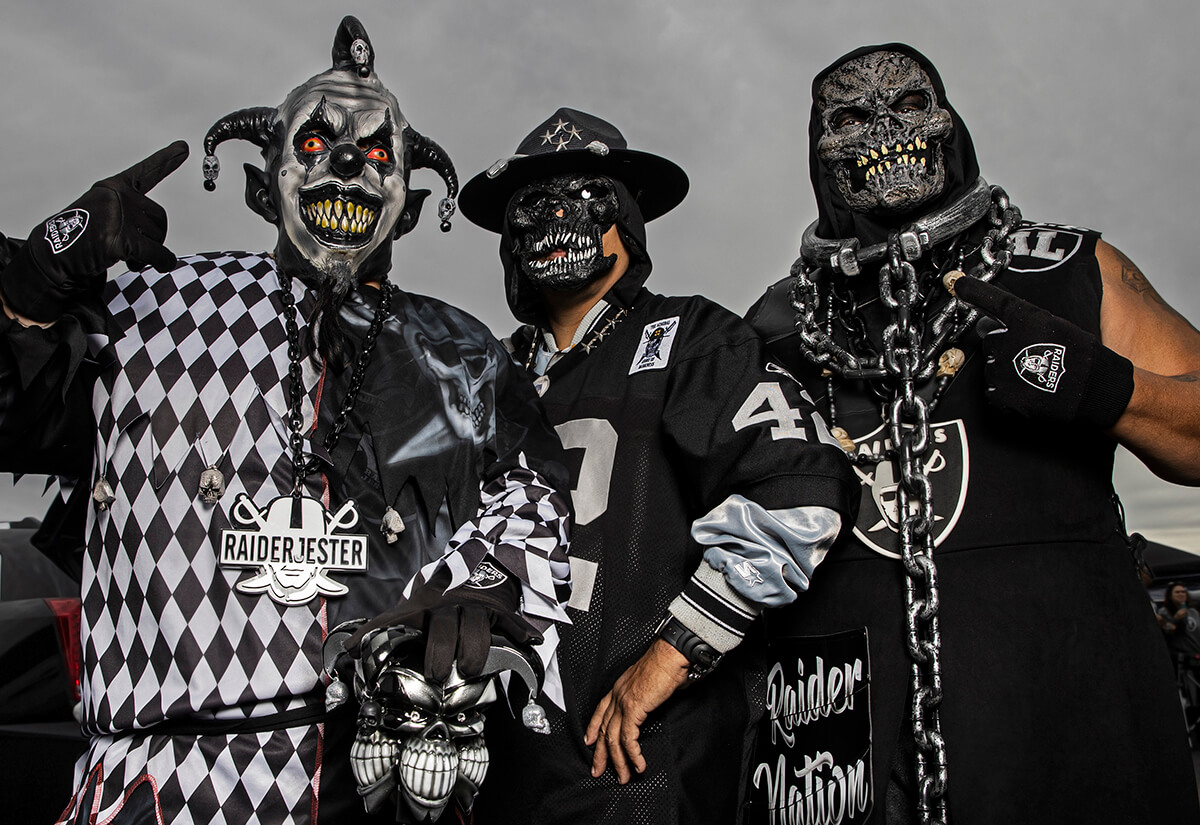 Anthony Herrera, from left, from Inglewood, Calif., Daniel Zavala Jr., from Fresno, Calif., and Marvin Alas, from Los Angeles, hang out outside Allegiant Stadium before the start of the game. 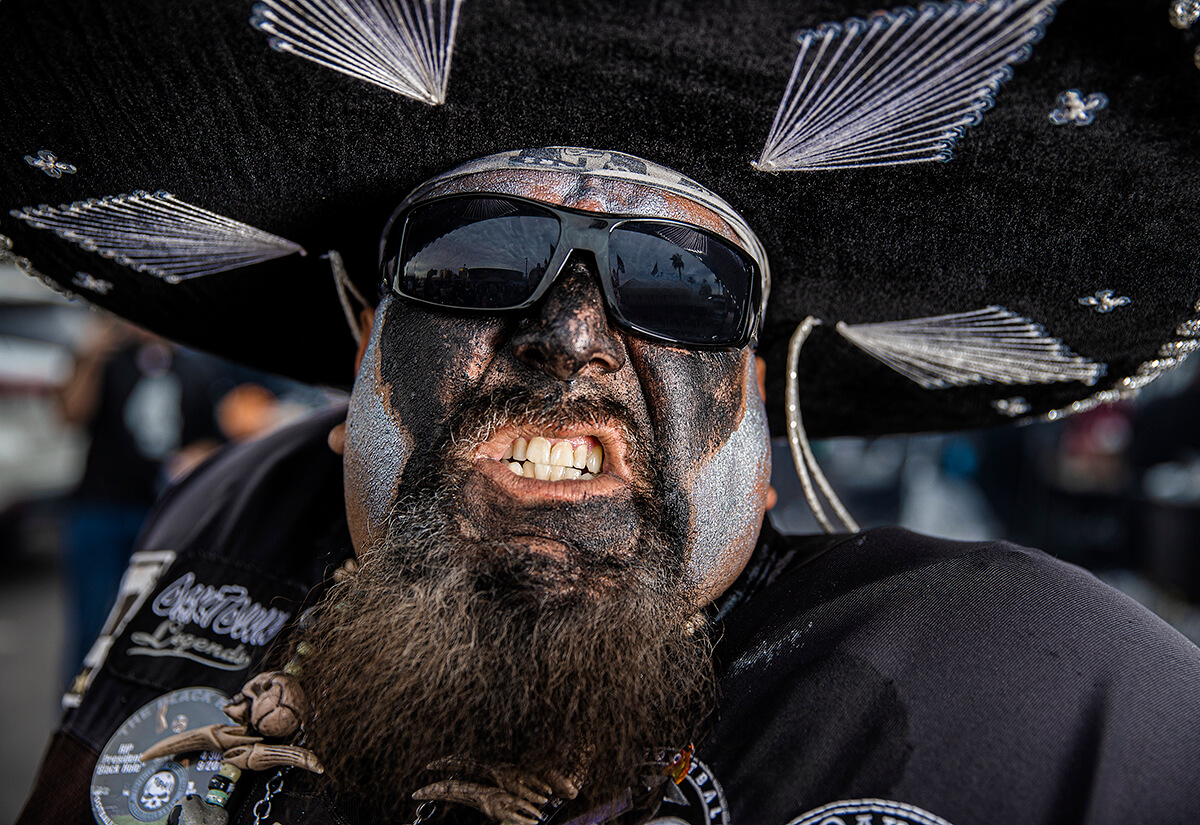 Sean Camacho is from Hayward, Calif. 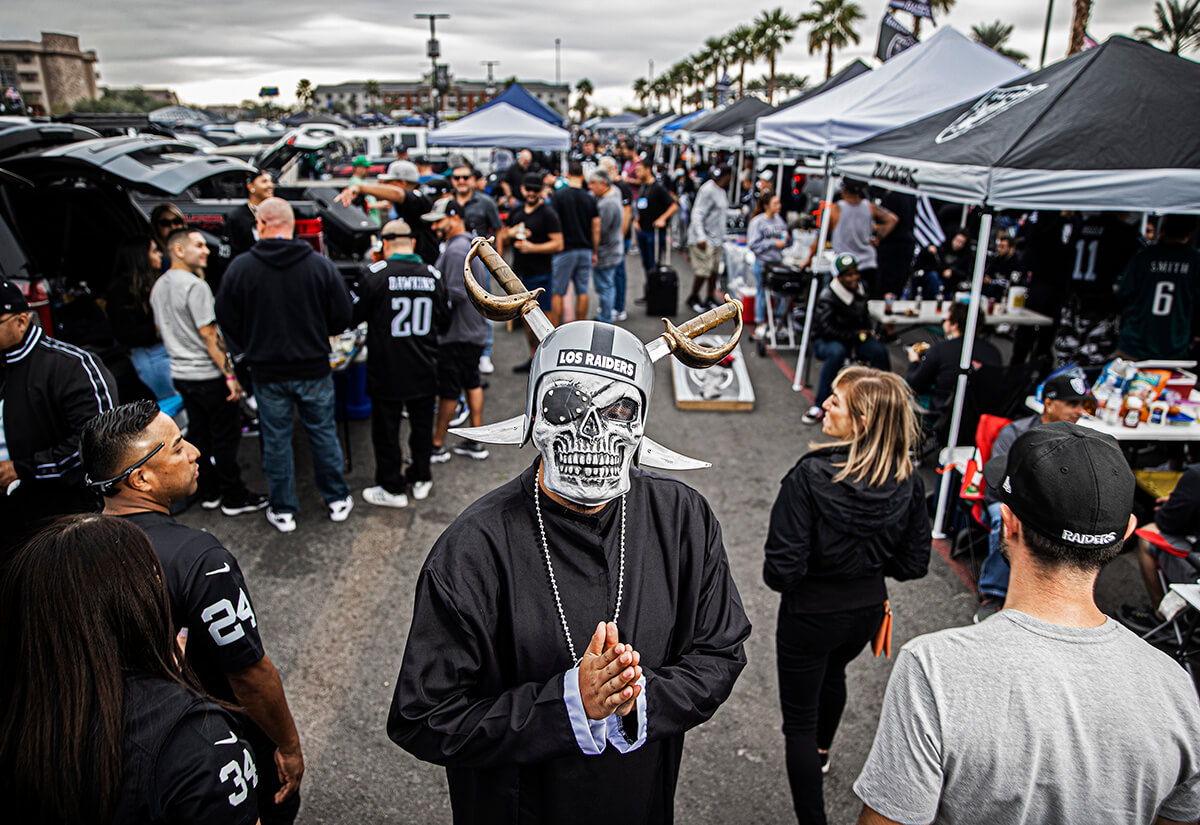 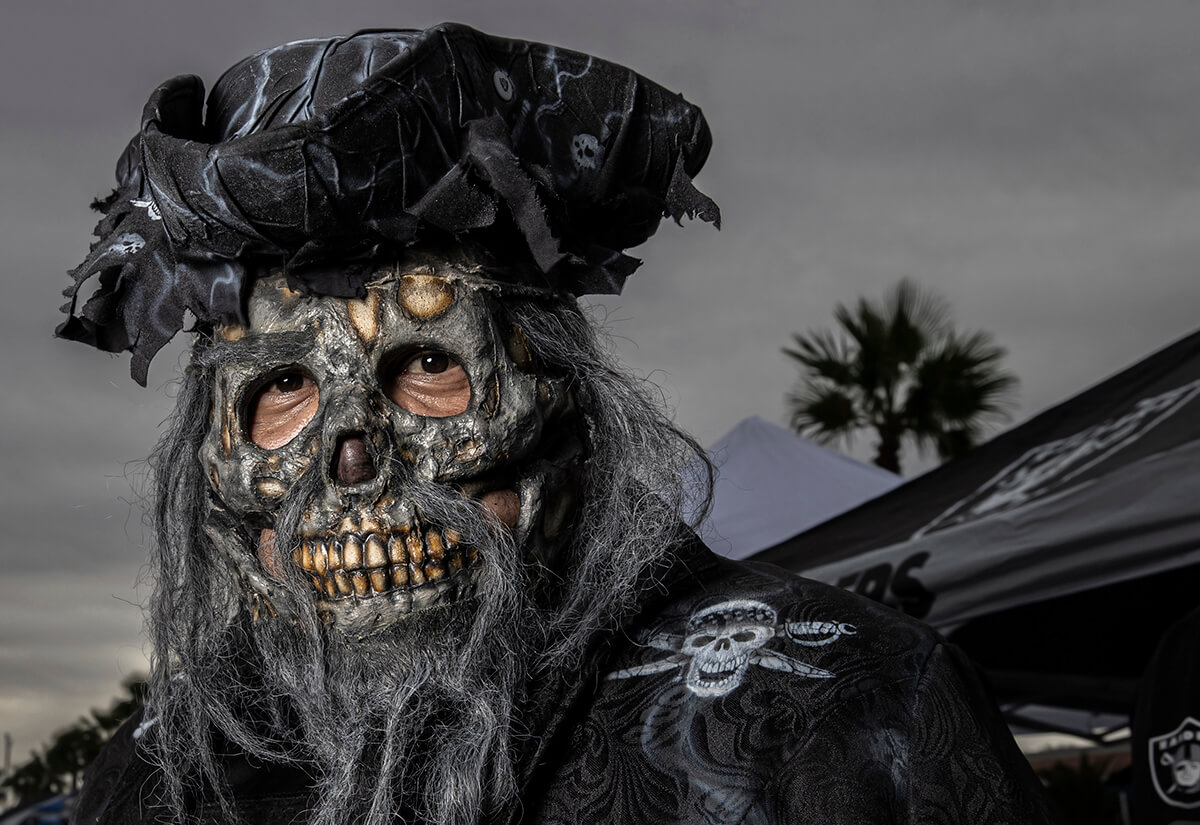 Leon, AKA Autumn Wind, is from Arrowbear, Calif. 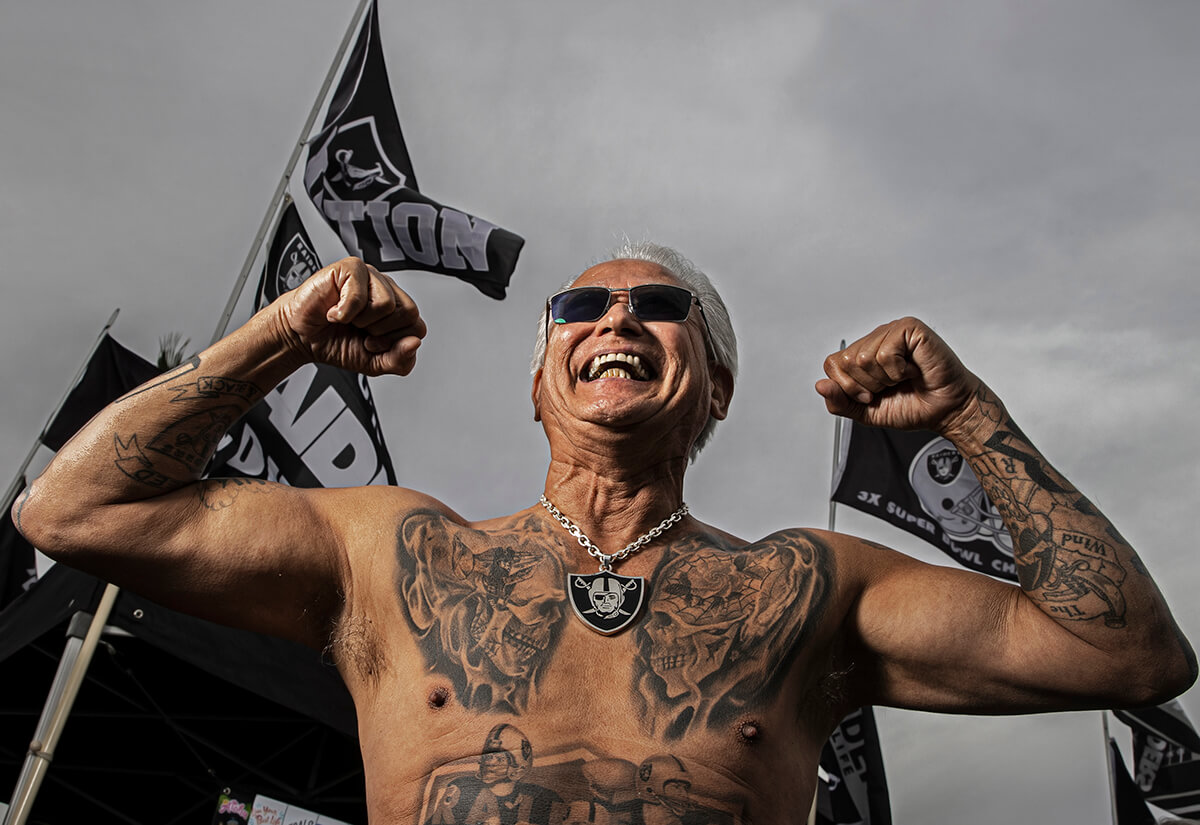 Jack Freeman, AKA Parking Lot Jack, is outside Allegiant Stadium. 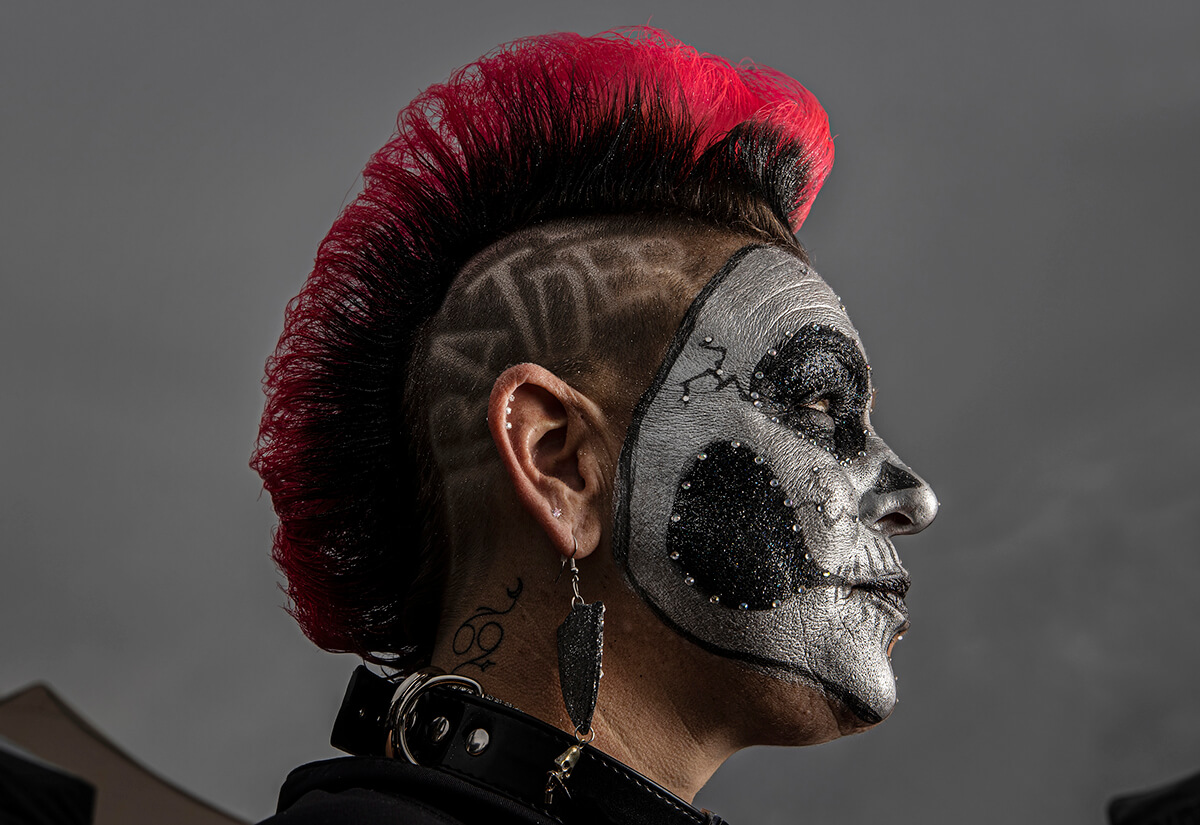 Jersey Tucker, AKA Raider Dirty Jerz, is from Las Vegas.