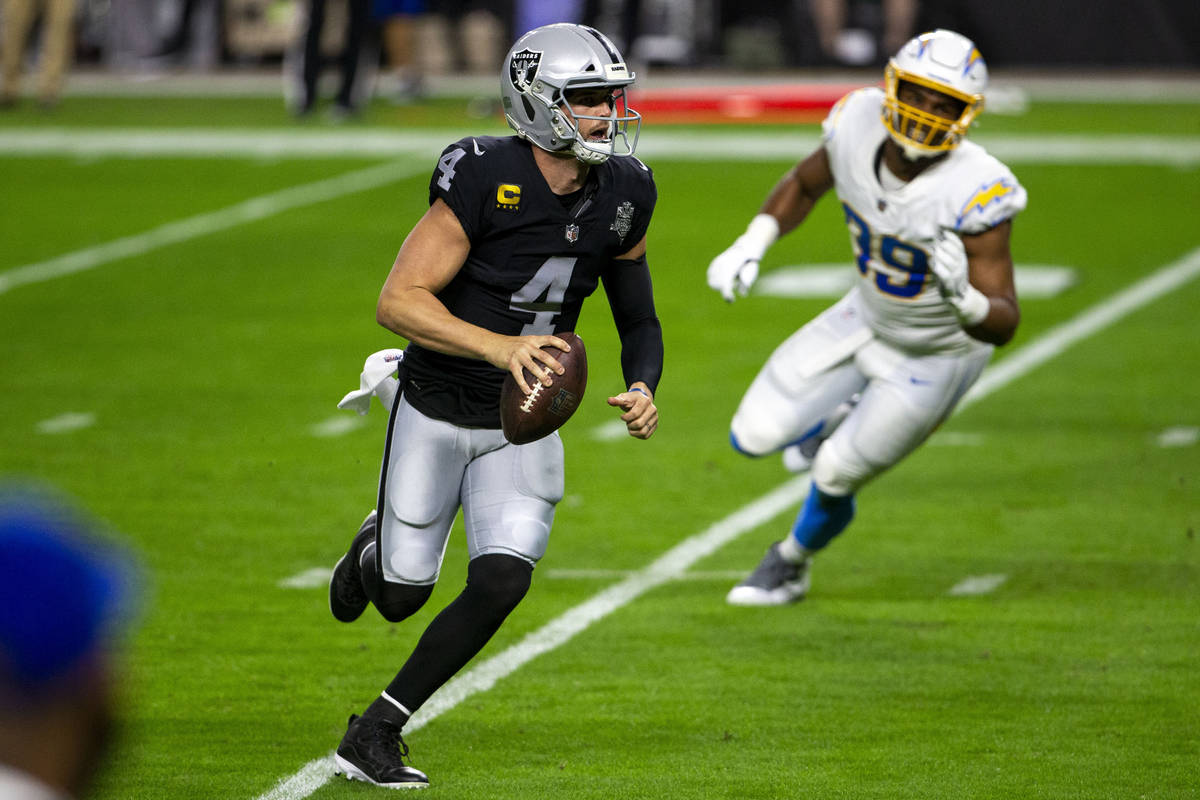 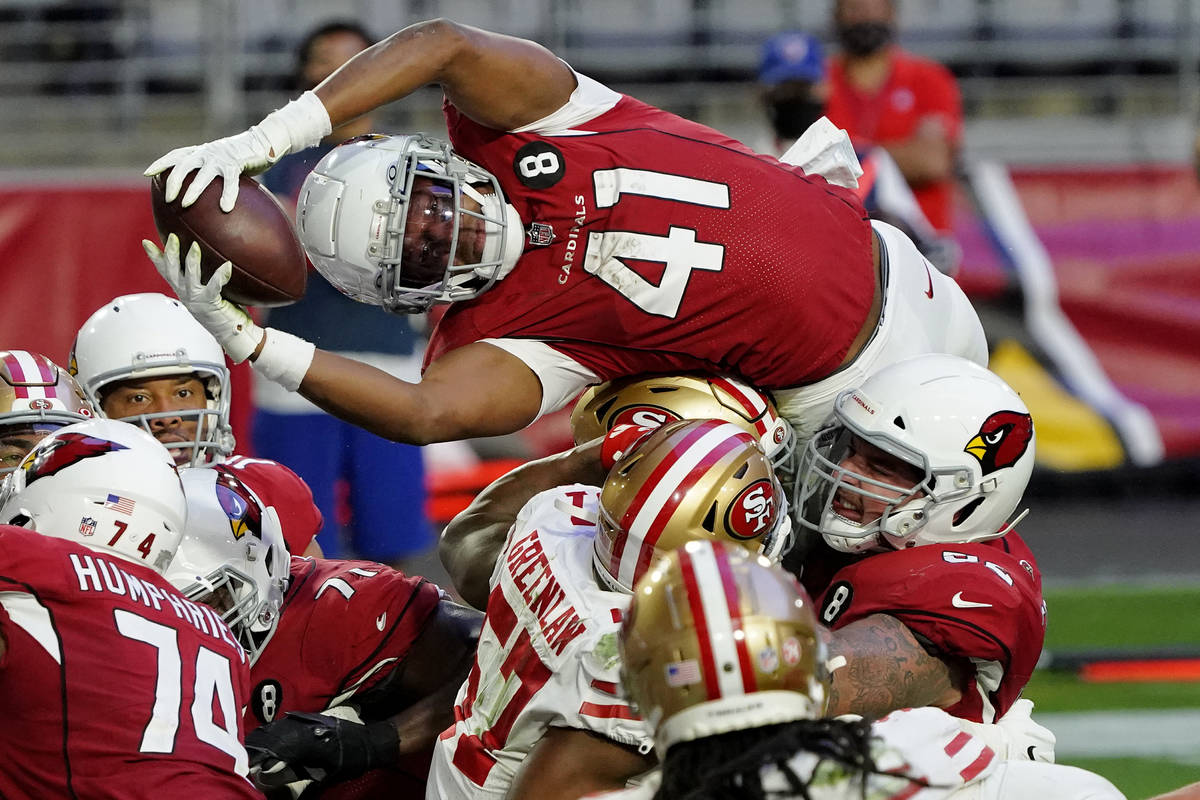 FILE - Arizona Cardinals running back Kenyan Drake (41) dives over the line for a touchdown against the San Francisco 49ers during the second half of an NFL football game in Glendale, Ariz., in this Saturday, Dec. 26, 2020, file photo. The Las Vegas Raiders have agreed to a two-year deal worth up to $14.5 million with free agent running back Kenyan Drake to complement starter Josh Jacobs. A person familiar with the deal says Drake will be guaranteed $11 million under the deal agreed to on Thursday, March 18, 2021. The person spoke on condition of anonymity because the deal hasn't been announced. (AP Photo/Rick Scuteri, File) 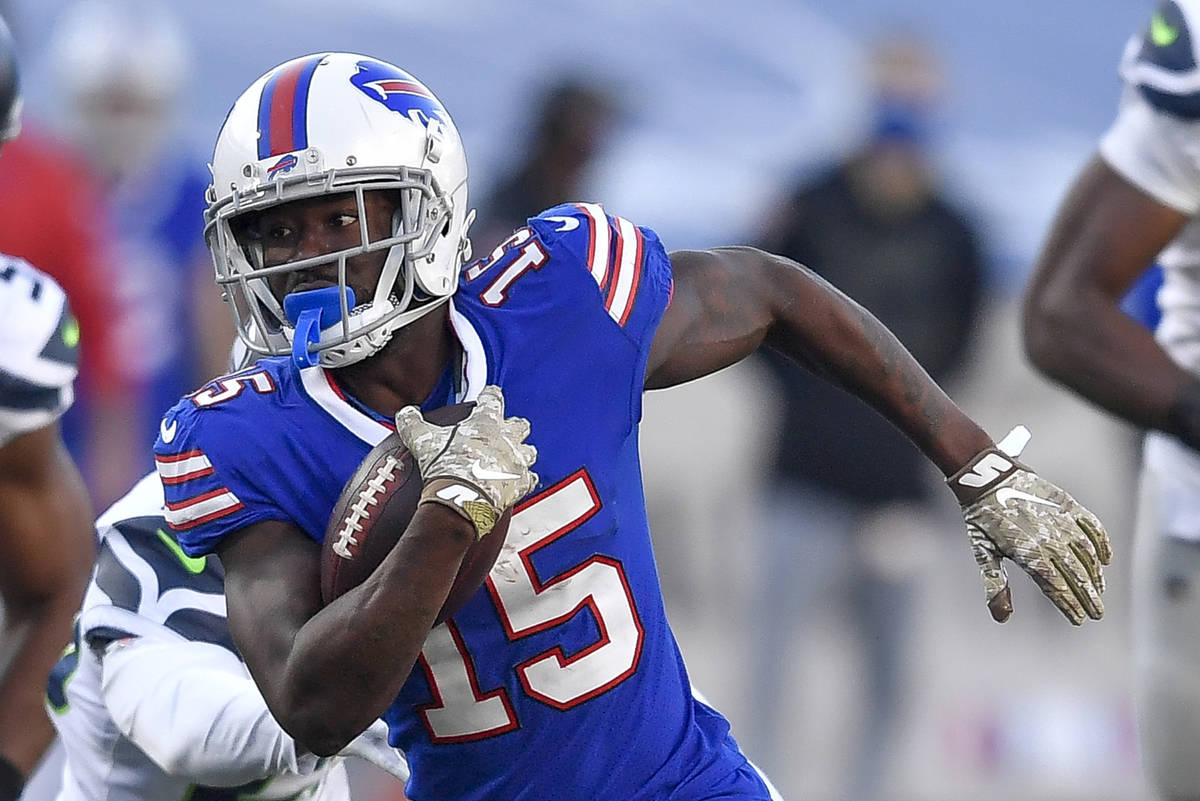 FILE - In this Nov. 8, 2020, file photo, Buffalo wide receiver John Brown (15) runs with the ball against the Seattle Seahawks during the second half of an NFL football game in Orchard Park, N.Y. The Bills released receiver John Brown and defensive lineman Quinton Jefferson in moves made Wednesday, March 10, 2021, to free up much-needed space under the newly announced salary cap. (AP Photo/Adrian Kraus, File) 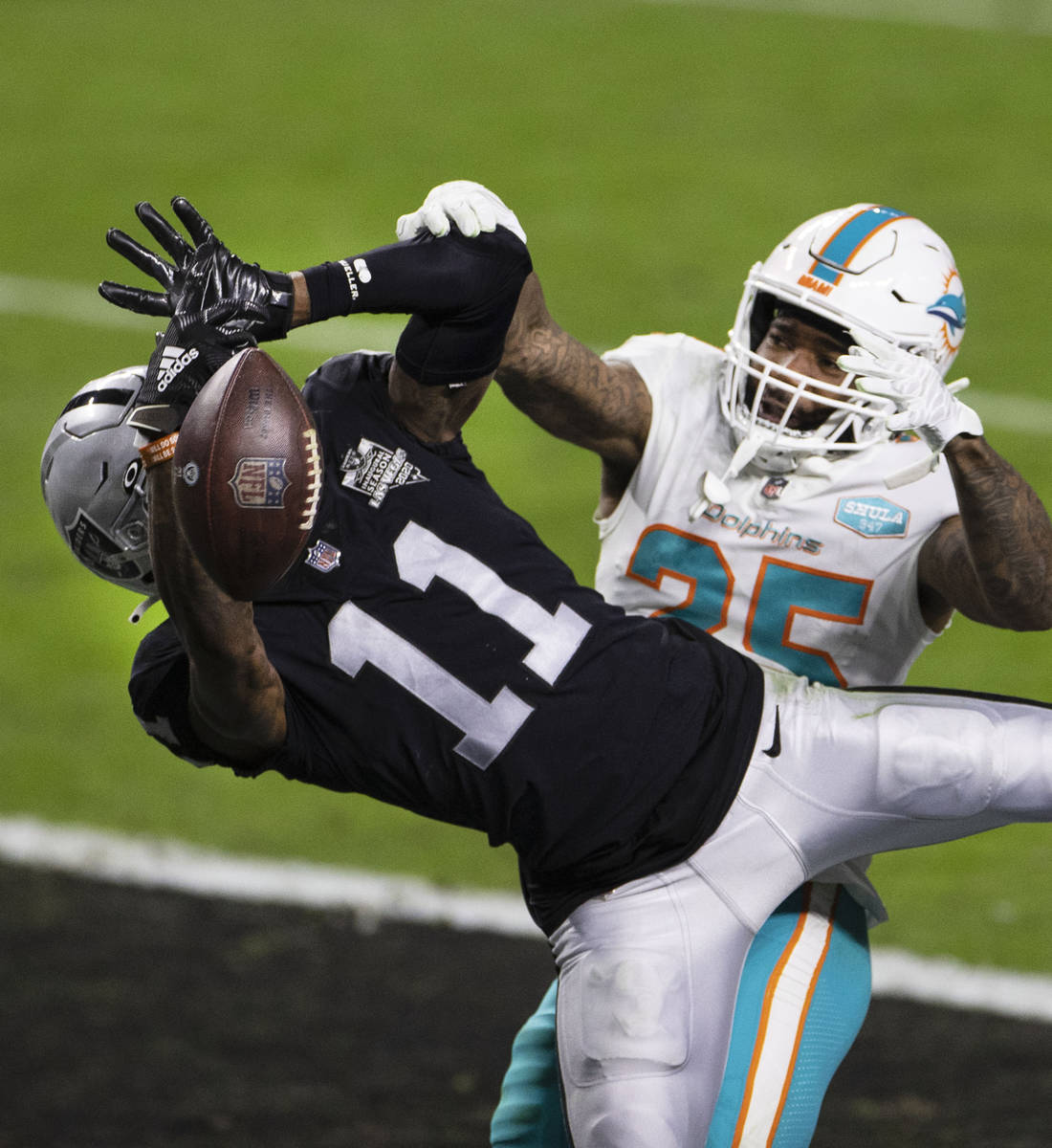 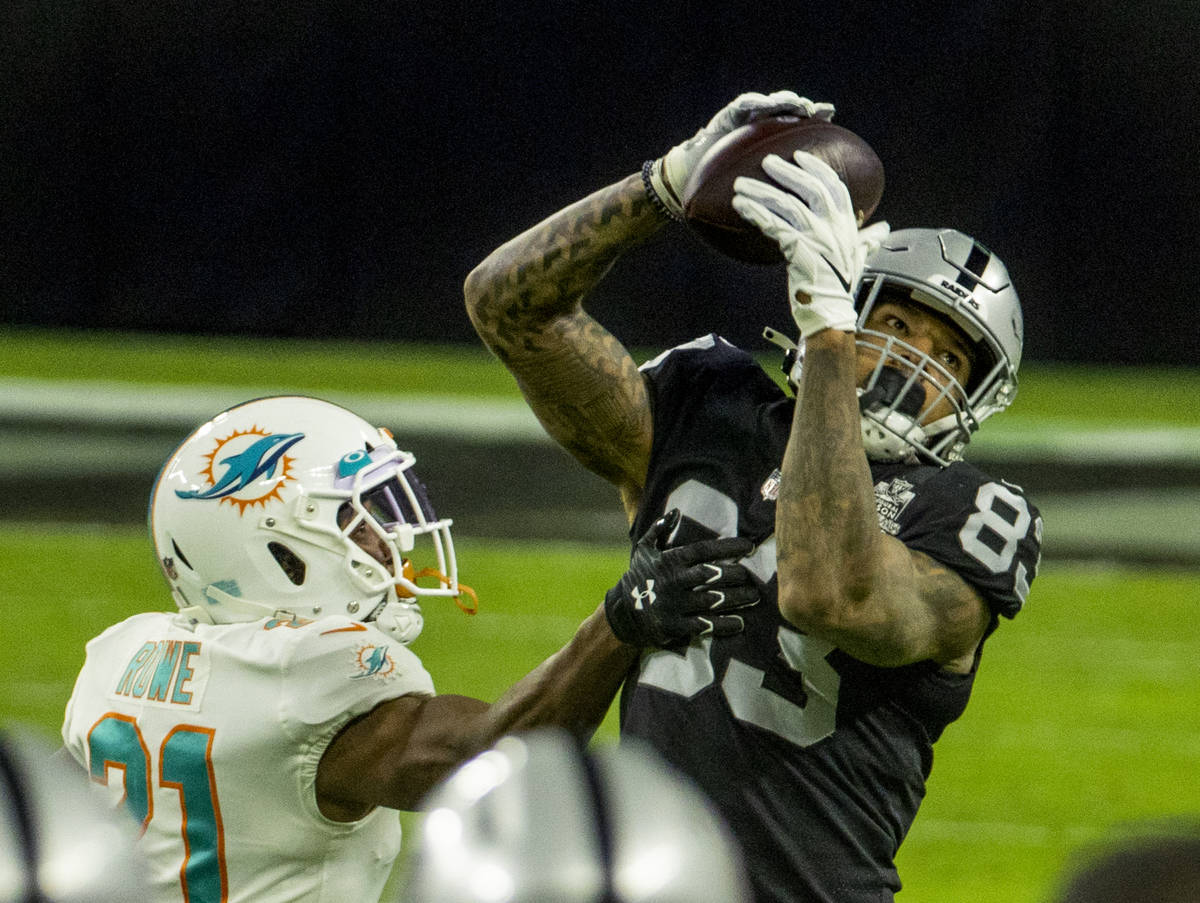 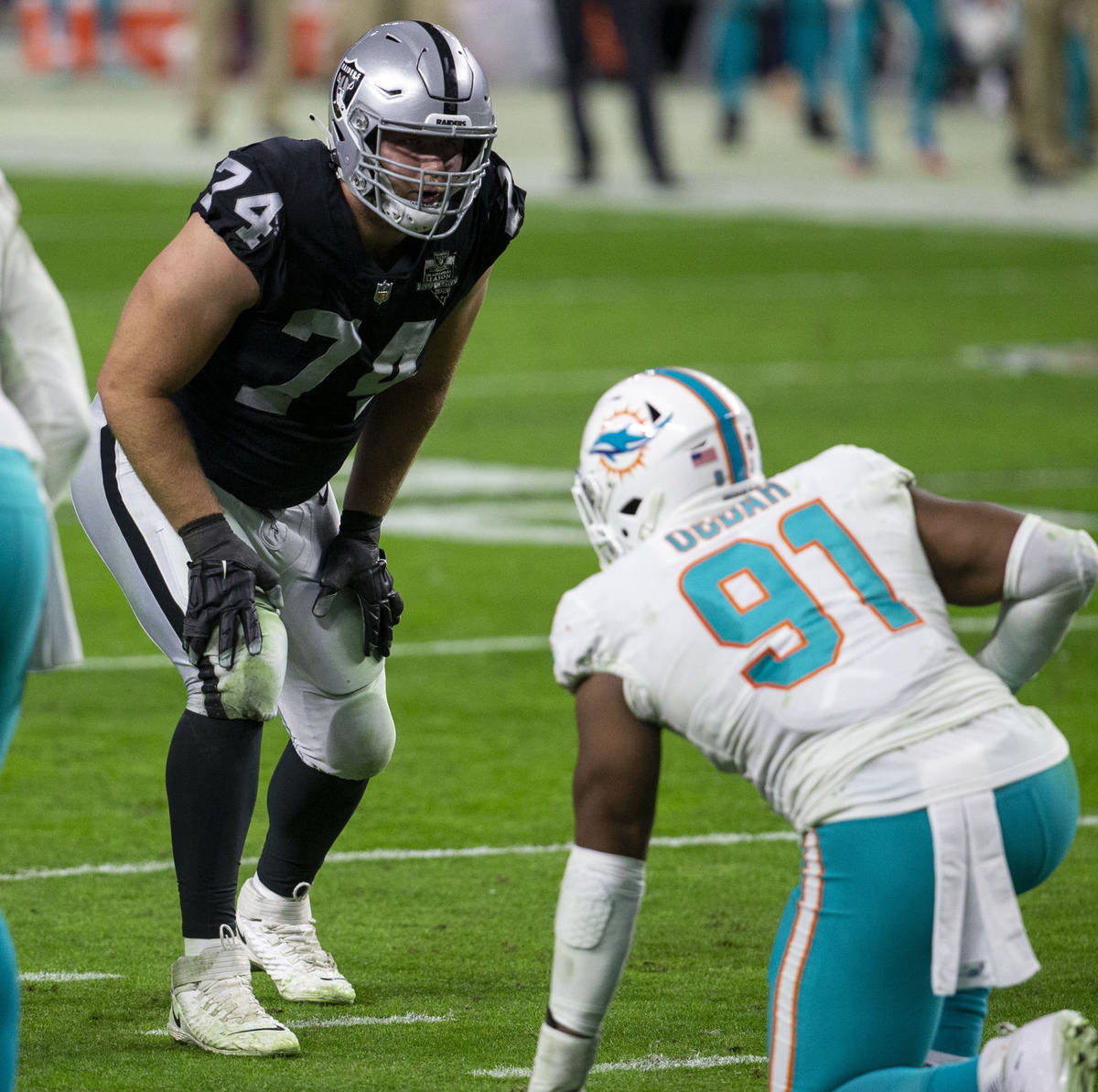 The Raiders were surprisingly active during free agency on offense.

Additions at running back and wide receiver improved depth and versatility, but massive changes on the offensive line created uncertainty at center and a conspicuous hole at right tackle.

The Raiders are confident a combination of in-house options and the draft will overcome the losses of offensive linemen Trent Brown, Gabe Jackson and Rodney Hudson, who were traded at the outset of free agency, but the calculated risk they are taking comes with undeniable anxiety.

Here is a position-by-position look at where the Raiders stand offensively:

What’s Up? The Raiders are in a strong position, with Carr coming off his best season and Mariota one of the NFL’s best backups. They have options with Mariota, either as the backup to Carr or, because of a contract restructure that reduced his salary from $10.7 million to $3.5 million, a trade chip.

Draft Buzz: With Mariota on a one-year deal and Peterman yet to distinguish himself as a viable backup, the Raiders could look to add a developmental prospect through the draft. Stanford’s Davis Mills, Texas A&M’s Kellen Mond and Wake Forrest’s Jamie Newman come to mind.

What’s Up? With Jacobs coming off back-to-back 1,000-yard rushing seasons, more than a few eyebrows were raised when the Raiders signed Drake. But they think that there is untapped potential in Drake and that pairing him with Carr will better tap into his running and receiving skills. The two-back attacks in New Orleans and Cleveland are the appropriate models.

Draft Buzz: With more pressing needs, it would be a surprise if they utilized a draft pick at running back.

What’s Up? The Raiders added playoff experience and toughness with the additions of John Brown and Willie Snead. Both figure to have major roles among a young wide receiver group. Snead’s best years were in New Orleans playing in a West Coast offensive system similar to the Raiders. His numbers should reflect that familiarity. The Raiders need to see improvement from second-year receivers Ruggs and Edwards. Ruggs, in particular, needs to play stronger, faster and more efficiently as a route runner.

Draft Buzz: Coach Jon Gruden and his never-ending quest to build the perfect offense means never ruling out the chance to add another weapon. South Dakota State’s Cade Johnson could be a possibility in the fourth round.

What’s Up? Waller is in the conversation as the NFL’s best tight end, and the Raiders think there is still upside and more ways to get him open. Moreau is completely healthy after suffering a serious knee injury in 2019 and ready to be leaned on more heavily. His presence in the red zone could go a long way toward helping the Raiders increase their touchdown percentage in that area. Carrier is a valued blocker and special teams player.

What’s Up? Some combination of Good, Incognito and Simpson should adequately stabilize the two guard positions, and while James appears to be the heir apparent at center, the Raiders signed the veteran Martin as an insurance policy. For now, Parker is the de facto starter at right tackle, but that should change come draft day.

Draft Buzz: One of the deepest tackle drafts in years likely explains the Raiders’ lack of urgency replacing Brown via free agency. They have the 17th pick in the first round, and Virginia Tech’s Christian Darrisaw would be an ideal selection. If he isn’t there, Oklahoma State’s Teven Jenkins could be the choice.