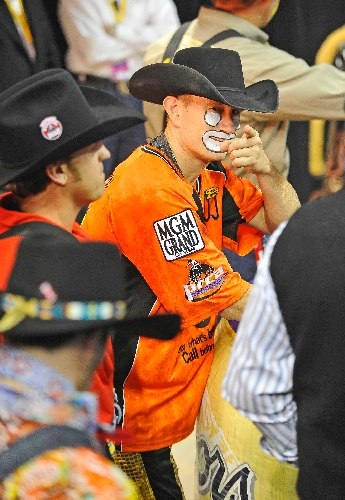 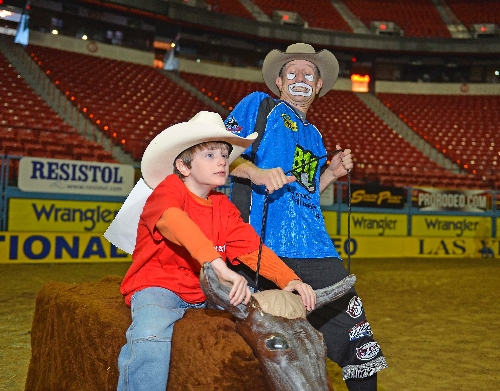 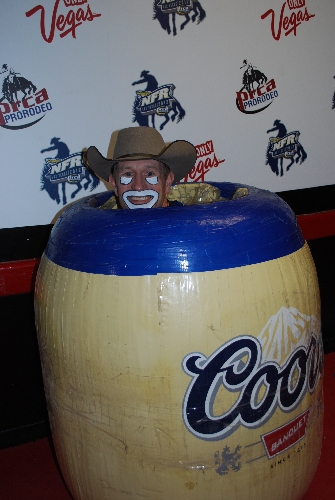 As soon as I was told by the great writer Joe Kusek of the Billings (Mont.) Gazette that Wrangler National Finals Rodeo first-time barrelman J.J. Harrison was a former schoolteacher, I was intrigued.

What would make a man who spent nearly a decade as an educator want to spin 180 degrees and go off on a new career as a rodeo clown and barrelman? I had to find out.

I caught up with Harrison, who hails from Walla Walla, Wash., before Round 8 on Thursday night to find out more, and I discovered he has a heck of a story.

After graduating in 1998 from Washington State, where he competed on the rodeo team, Harrison used his education degree to go to work as a middle school science teacher.

Now, dealing with teenagers and preteens on a daily basis would be enough to drive people in a number of different directions – including over a cliff or toward becoming a rodeo clown – but Harrison loved it and was a natural for the job.

"I’m really savvy with kids, and kids are people I’ve always been naturally drawn to," said Harrison, who earned a master’s degree from Grand Canyon University. "I taught the grades that no one wants to be around. Hormones are firing on all cylinders, and I was the teacher who had every kid who had gotten in trouble in my room."

Harrison was given the "problem children" whom other teachers shied away from and worked hard to connect with them.

"There was a class of 15 boys that no other teacher wanted to have in their room, and I would see them two or three times a day," he said. "I liked it because I was that kid. I’m a ball of energy. I see the value in taking the time for those kids because they need it more.

"A lot of them would do a 180 and turn the corner. A kid has to have the chance to be successful, and I put a lot of effort into giving kids chances."

Harrison had a unique approach and philosophy to teaching.

"There will be people who disagree with this statement, but as a middle school teacher, you have to be their friend first," he said. "Those are such crucial years that, more important than the curriculum and what I teach those kids, they need to like school. If they leave my room liking school and are saying, ‘Mr. Harrison’s great,’ they’re going to keep their mind open to learning."

After eight years of making a difference in the classroom, a surprising career avenue came along for Harrison .

"It was just a spur of the moment thing," he said. "Frank Beard of Beard Rodeo Company put on a bull riding (event), and he said, ‘Why don’t you come be my clown?’ I said, ‘No, clowns are not my thing.’ He said, ‘No, just be yourself and come and have fun.’

That was 2004, and Harrison balanced the two pursuits for a while – teaching during the school year and clowning in the summers – until his schedule got so full that he decided to make a go of it in the rodeo world on a full-time basis.

He bought his PRCA card in 2006 and has been on the rodeo trail ever since, working rodeos across the nation and building a solid reputation as a consummate pro and quality entertainer.

Naturally, he tailored his acts and his approach to kids.

"I’m still a kid at heart, and you can see it in the way I act and the way I perform in the arena," Harrison said. "I cater my show to kids and try to stay trendy with what they’re doing because I think they’ve got a pretty good grasp on comedy. Rodeo fans who bring their kids to rodeo and have to deal with their kids tend to not come to the next one, but for rodeo fans who come and their kid is glued to the clown, it’s like three hours of free day care. I try to provide that."

T his fall, he got the call for which every clown and barrelman hopes and prays. He had been selected to work the Wrangler NFR as its barrelman.

"I saw the call was from Colorado Springs (where the PRCA is headquartered), and my first thought was, ‘Oh, my God, I’ve been fined,’ " Harrison said. "They called again and again, and that’s when I thought something was going on, because they weren’t leaving messages. They told me, and my heart just dropped.

"It was extremely humbling and brought a tear to my eye."

Harrison has thoroughly enjoyed his first Wrangler NFR, and his wife, Melissa, and 4-year-old son, Huckelberry – "Huck" for short – have been here with him the whole time. He’s making the most out of his opportunity, going to photo shoots, autograph sessions, meetings and functions all hours of the day.

"It’s all good stuff, and it’s stuff I choose to do and want to do," he said. "I want to capitalize on everything I can while I’m here in Vegas and put myself and my persona and abilities in front of as many people as I can. I want people when they hear the name J.J. Harrison to have a positive image in my mind and say, ‘That’s a cool guy.’ "

He’ll never forget rolling his barrel into the Thomas & Mack Center arena for Round 1 with more than 17,000 fans cheering wildly as the bull riding prepared to begin.

"There’s nothing like that, and to say that you’re not nervous and it’s just another rodeo – yeah right dude," Harrison said. "It’s not just another rodeo. It’s the Wrangler National Finals, and it doesn’t get any bigger. It was awesome."

New experiences are what Harrison is all about, and the multitalented cowboy earned his pilot’s license in 2010 because of a love for flying and a desire to find a "release" from the daily grind of the rodeo trail. He also worked as a ski instructor for many years, so his interests vary and his thirst for life is unending.

"I’m an educator, so I’m all about learning," Harrison said. "I like to try new things, and I’m always a fan of anything that stretches you mentally and physically. You can get in a rut every now and then, so you can’t always stay in third gear. You have to shift into another gear."

Neal Reid is a freelance writer based in Colorado Springs, Colo., who spent five years as editor of the ProRodeo Sports News and who has written for USA Today, ESPN, ESPNW, American Cowboy, Western Horseman and The Associated Press. This is his ninth Wrangler National Finals Rodeo. 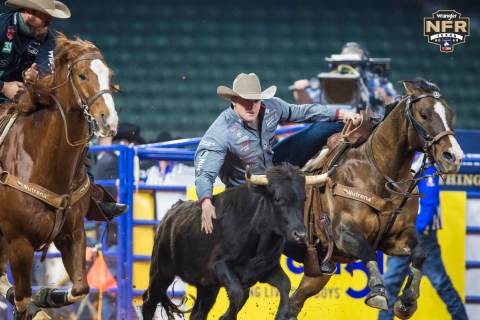 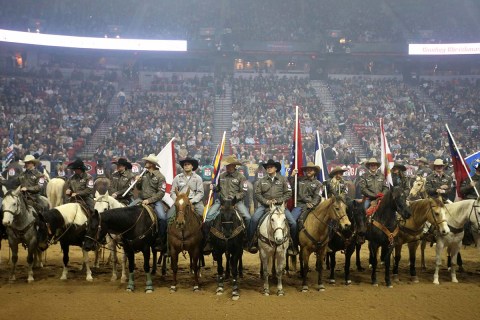 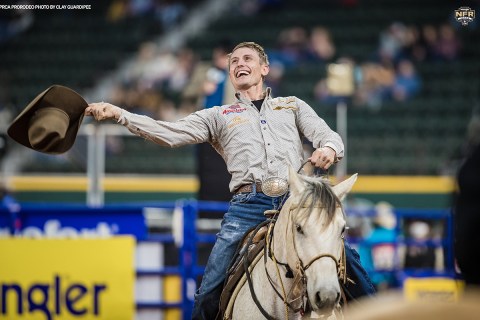 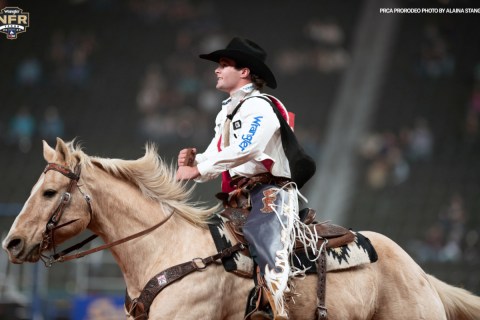 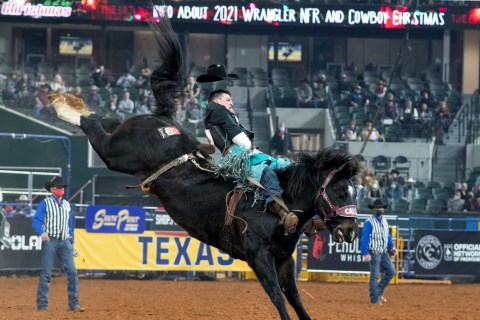 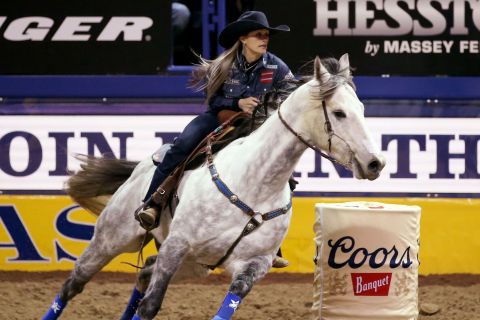 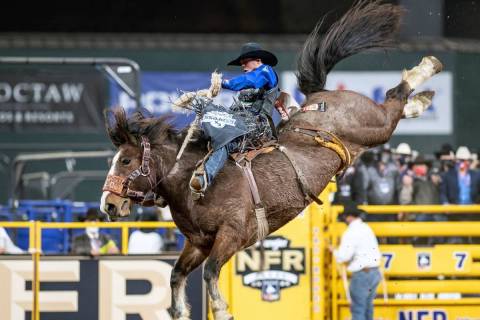