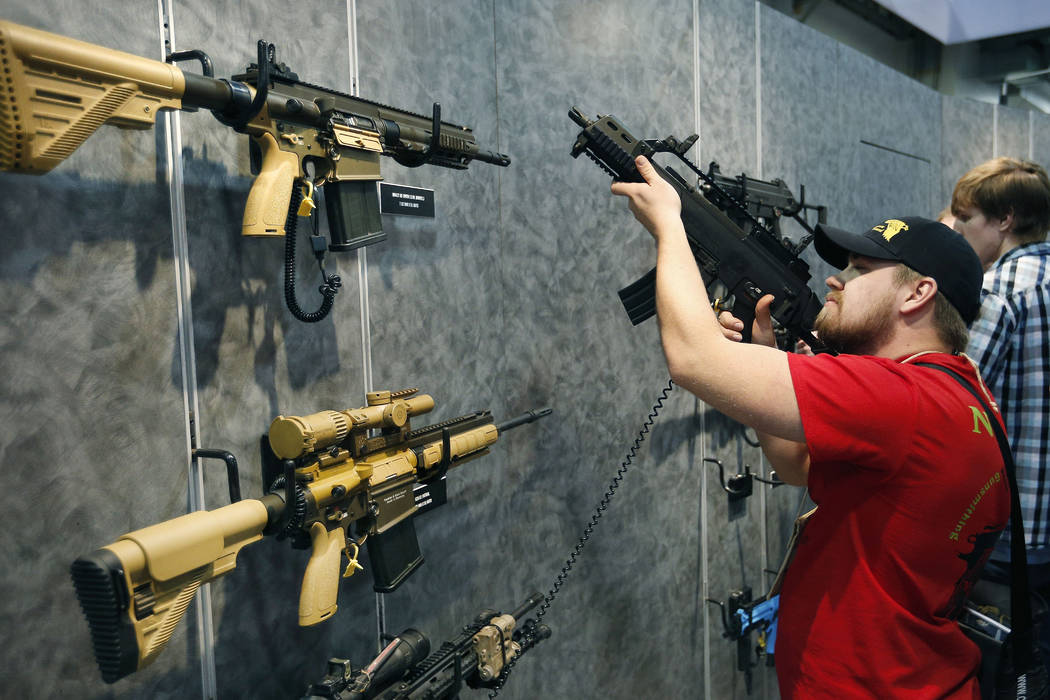 In this Jan. 19, 2016 file photo, Nolan Hammer looks at a gun at the Heckler & Koch booth at the Shooting, Hunting and Outdoor Trade Show in Las Vegas. (AP Photo/John Locher, File)

Every spring as daytime temperatures begin to climb, so do the chances that someone’s loved one will experience a drowning.

The national average was almost 3,600 unintentional drowning deaths annually from 2005 through 2014, according to the Centers for Disease Control and Prevention. That’s almost 10 deaths a day.

To prevent drownings, especially among children, communities across the country have chosen to promote the ABC’s of Drowning Prevention. Those are adult supervision, barriers to prevent access to swimming pools, classes — both swimming and CPR — and devices. The list of devices includes life jackets, rescue aids and cellphones.

Similar steps have been taken to encourage fire safety. The Red Cross, for instance, encourages us to install smoke alarms, to inspect and test them monthly, and to hold safety briefings with family members twice each year to discuss and practice fire escape plans.

What’s missing is the same kind of broad community support for educational programs that encourage and teach firearm safety. One such program is politically neutral with no other agenda than teaching children what they should do if they happen upon a firearm. Its central message is simple and easy to remember: “If you see a gun, stop, don’t touch, run away and tell a grown-up.”

Such is the mantra of the Eddie Eagle GunSafe Program. Designed for kids from preschool age through fourth grade, Eddie Eagle and his animated Wing Team members were created by the National Rifle Association to encourage firearms safety among our youth and their parents.

Kids and adults are curious, especially about things with which they are unfamiliar. Sooner or later, even if their parents try to quarantine them against it, kids will encounter a firearm. Wouldn’t it be smart for them to know they shouldn’t touch it, but instead to get away from it and tell a responsible adult where it is?

When it comes to firearms safety, one can apply the same principles as those taught through the ABC’s of Drowning Prevention. First, make sure that there is adult supervision available anytime a firearm is accessible. Second, provide barriers that prevent unauthorized access to firearms, especially when adult supervision is unavailable. A gun safe would do the job. Third, encourage family members and friends to attend classes that teach the fundamentals of firearms safety. And fourth, use devices such as gun locks that will make a gun inoperable until they are removed.

A list of Nevada law enforcement agencies that distribute these locks is available at projectchildsafe.org/safety/safety-kit/Nevada.

Principles of gun safety can be learned through programs such as the 4-H Shooting Sports Program, Hunter Education classes, the Boy Scouts of America and private shooting classes. The Nevada Firearms Coalition is offering a class in firearms safety for ages 12 to 19 that will cover rifle, pistol, shotgun and archery. The course will be June 11 to 15 at the Clark County Shooting Complex Education Center. Register at nvfac.org .