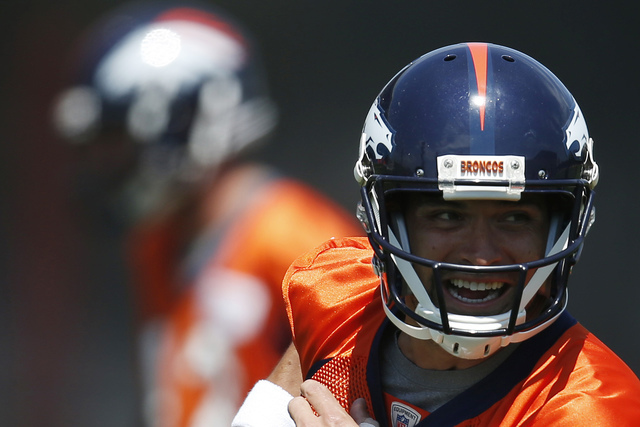 FILE - In this June 7, 2016, file photo, Denver Broncos quarterback Mark Sanchez runs during an NFL football practice at the team's headquarters in Englewood, Colo. One of the last things an NFL team needs when it enters training camp is uncertainty at quarterback. So Gary Kubiak and John Elway must figure out if Mark Sanchez can avoid the big mistakes that have plagued his career. (David Zalubowski/Associated Press)

Comical misadventures have made Mark Sanchez the butt of jokes for much of his NFL career, but the Denver Broncos are betting on getting serious production out of him this season.

The author of the “Butt Fumble,” one of the most embarrassing plays in league history, Sanchez is following Peyton Manning as the No. 1 quarterback for the defending Super Bowl champions. It’s not as crazy or as funny as it might sound.

“I think Sanchez will play better for the Broncos than Manning did at the end of last season,” Westgate sports book director Jay Kornegay said. “A lot of people are underestimating the Broncos right now because of their quarterback situation. But if you look at the rest of their team, what is their weakness?”

Denver brings back linebacker Von Miller and most key pieces from the league’s No. 1-ranked defense. The offense features a pair of big-play wide receivers — Demaryius Thomas and Emmanuel Sanders — and running back C.J. Anderson.

There are no obvious reasons the Broncos won’t be in the running to win the AFC.

“Manning stunk last year. Any quarterback play that’s decent is going to be better than what they had last year,” said Mike Pritchard, an ESPN Radio host in Las Vegas who played nine seasons as a wideout in the NFL, including the 1994 and 1995 seasons in Denver.

How weak was Manning? His passer rating was 34th in the league, and he finished the regular season with nine touchdowns and 17 interceptions. A quarterback by another name with those numbers would be tossed out with the garbage.

Sanchez has issues, but he should be an upgrade. In his first two seasons with the New York Jets, a team anchored by a dominant defense, Sanchez made it to consecutive AFC title games. Yet his career started to nosedive.

In 2012, he collided with the big backside of offensive lineman Brandon Moore and coughed up a fumble the New England Patriots returned for a touchdown. A Wikipedia page is dedicated to the butt fumble play, which was ranked by ESPN as the most embarrassing moment in Jets history. Clumsy turnovers were a conundrum for him in five years with the Jets and the past two in Philadelphia.

He has an opportunity to shed his reputation as a clown and revive his career in Denver.

“Sanchez has got the best wide receivers he’s had to work with, a good running game and a very solid offensive line. I think he’s going to have a lot of help,” Kornegay said. “The Broncos are going to run the ball and rely on their defense.”

Sanchez is not a lock to win the job, although coach Gary Kubiak has named him the starter over Trevor Siemian, a seventh-round pick from Northwestern in 2015. Things could change in the preseason.

Most likely, Sanchez will be the bridge from Peyton to Paxton. Denver general manager John Elway traded up to grab Paxton Lynch, a 6-foot-6-inch quarterback from Memphis, in the first round of April’s draft. Lynch is probably a year away.

Pritchard said he believes Sanchez, an eight-year veteran, will start because he’s “been there before,” and the Broncos want to install a “completely different offense” that is run-based with fewer shotgun formations and more play-action passes.

“My money would be on Sanchez because of his experience,” Kornegay said. “Siemian has been a darkhorse ever since they drafted him. Elway believes in the guy. I wouldn’t rule him out.”

Denver, 12-4 last season, is tagged with lower expectations across the board. The Westgate posted the Broncos’ regular-season win total at 9½ (Over plus-130). Kansas City’s win total is 9½ and shaded higher (Over minus-130).

“I could see the Raiders or Chiefs winning the division,” said Micah Roberts, a VegasInsider.com handicapper and former sports book director. “The Broncos are probably going to have a Super Bowl hangover. There’s a Super Bowl slump mixed in with a new quarterback, and I wouldn’t expect their offense to be that fluid.”

Other favorites in the AFC have problems, too. New England will need to survive quarterback Tom Brady’s four-game suspension. Pittsburgh’s explosive offense might miss running back Le’Veon Bell, who faces a four-game suspension for a violation of the NFL’s drug policy.

“I think the AFC is wide open,” Pritchard said.

The Broncos open Sept. 8 against Carolina and Cam Newton, who learned the hard way about the dominance of Denver’s defense in the Super Bowl. The Panthers, projected to be a .500 team at this time a year ago, finished 15-1.

“Who’s going to be this year’s Panthers?” Kornegay said. “It’s a difficult league to predict.”