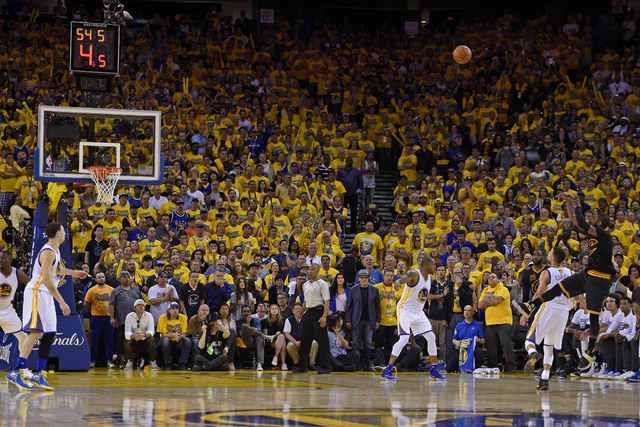 When something never has happened, it’s hard to believe in it. So the Cleveland Cavaliers were all but written off, because it made all the sense in the world. It made sense until LeBron James scripted something out of Hollywood.

This was a resilient Rocky Balboa getting pummeled by Ivan Drago before rallying to knock out the Russian boxer on enemy ground. Except this was real.

James said it best Sunday night: “Against all odds.”

A week ago, it was only a matter of time until Golden State was crowned as a repeat champion. Teams leading 3-1 in the NBA Finals were 32-0 all time, and the Warriors, who almost never lose at home and had dropped back-to-back games only once all season, were in a dominant position, to say the least.

Golden State was posted as high as a 40-1 series favorite at the Westgate sports book, where a few diehard believers actually put their money on Cleveland. Against tall odds, those tickets on the Cavaliers are getting cashed.

It happened because James, who was a disappointment as the Cavaliers dug a deep hole early in the series, showed up and played three of the best games of his life in succession. It happened just when it appeared LeBron’s legacy was fading.

How did he top back-to-back 41-point games? He did it with a triple-double in a classic Game 7, totaling 27 points, 11 rebounds and 11 assists to lift Cleveland to a 93-89 victory over the Warriors on Sunday night in Oakland, California, where the Cavaliers were blown out by a total of 48 points in the first two games of the series.

“It’s a hell of an accomplishment,” Sportsmemo.com handicapper Erin Rynning said. “Give all the credit to LeBron and the Cavs. Anyone who says Curry is better than LeBron needs to get their head checked.”

James, the obvious MVP of the Finals, played 47 of 48 minutes in Game 7 because he promised Cleveland its first sports championship since 1964 and he was determined to deliver it. With the wounded Warriors stumbling to the finish line, James turned into a shark and smelled blood.

It also could be said the series changed before that game when Golden State forward Draymond Green was suspended for taking a swing at James below the belt. The series changed in that game because Warriors center Andrew Bogut, a rim protector on the defensive end and a strong screener on the offensive end, went down with a knee injury. There is a gray area between reasons for a team’s failure and excuses for it.

Call it an epic comeback by the Cavaliers or an epic collapse by the Warriors. The truth is somewhere in the middle.

James and Irving took control of the series at the same time Curry and Klay Thompson became too casual. Curry, sometimes too cool for his own good, flipped a behind-the-back pass out of bounds in the fourth quarter and shot 4-for-14 from 3-point range. Thompson hit only 2 of 10 3s. With a title on the line, the “Splash Brothers” did a belly flop.

“A lot of little things just weren’t right with the Warriors,” Sherman said. “I guarantee after this Curry will say he wasn’t 100 percent. And I’ll tell you what, if Irving doesn’t do what he did, the Cavs were not winning this thing.”

Curry’s knee injury from early in the playoffs probably contributed to his demise in the Finals, but that’s an excuse. The main reason for his scoring shortage was the fact he was bothered by the size and strength of the Cavaliers’ defenders, such as Tristan Thompson. Cleveland decided to get physical against a finesse team, and the attitude change happened just in time.

Incredibly, the high-scoring Warriors were held to 13 points in each fourth quarter of their final two home losses. Never have we seen that. Golden State panicked and stopped running its offense, and Curry deserves a lot of criticism for that.

Cleveland winning the championship is not stunning when considering Golden State went into the series as a 2-1 favorite. I picked the Cavaliers to win in seven, and bet them in Game 7 as 5-point underdogs, but I also was dead wrong about a lot that happened during the course of a series that turned into a long, strange trip.

“I’m speechless,” said Doug Fitz, a Las Vegas handicapper and Cleveland native who admitted to shedding a few tears after the Cavaliers won the title.

It was done with toughness, and it was done the hard way, which was fitting for hard-core Cleveland. As LeBron said, it was done against all odds.