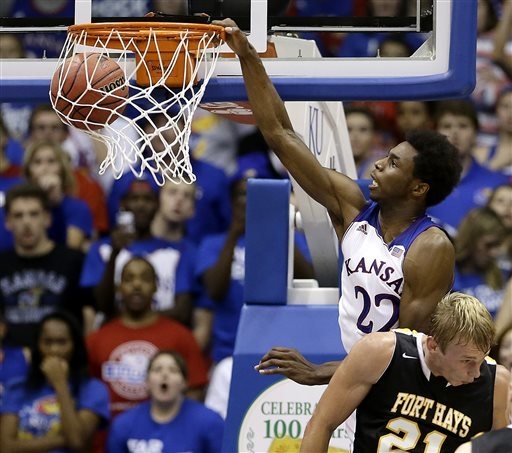 Without seeing Andrew Wiggins play, most media pundits are assuming the Kansas freshman will be the No. 1 pick in next summer’s NBA Draft. That might turn out to be true, but remember to always wear a helmet when riding a motorcycle and jumping to conclusions.

If it seems the meteorologist usually gets the forecast wrong, he is probably far more accurate than most who try to predict the college basketball season.

A year ago at this time, Kentucky was the trending team, and its season ended with a first-round National Invitation Tournament loss. Meanwhile, in the NCAA Tournament, Wichita State and Florida Gulf Coast were making inspirational runs.

Who predicted even two of those three developments? Nobody.

A new season tips off today, with 50 games on the betting board, and the teams atop the polls and power ratings are the usual suspects.

“I have Duke, Louisville, Florida and Michigan State all within a half-point of each other,” said Kenny White, a handicapper for DonBest.com and the former top oddsmaker at Las Vegas Sports Consultants. “I have Kentucky two points below, but that’s subjective because it’s a fresh rating on new players, and the hardest thing to rate is freshmen.”

The college game is becoming more chaotic every year because of the proliferation of transfer players, star freshmen bolting for the NBA and rule changes that turn games into officiating fiascos.

Look no further than UNLV to find a prime example of the first two points. The Rebels are replacing a freshman who went No. 1 in the draft, Anthony Bennett, and their top six players going into this season are transfers.

There are 351 Division I teams, and it’s nearly impossible to know and follow them all, yet the incredible volume of games creates major wagering opportunities from tonight through March.

In November, when most teams are a mystery and power ratings are being constantly adjusted, the sharpest handicappers believe they have the edge.

“We’re going to open the season with a bang. It’s certainly going to be a challenge not only for the bookmakers, but for handicappers, as well,” LVH sports book director Jay Kornegay said. “I feel like we’re all playing from the same tee in the beginning. I’m sure there are some weak spots or some value spots out there. But it’s up to the bettors to try to find those.”

UNLV projects as a wildly inconsistent team that could be more unpredictable than a blind date. It’s a team that will be grossly overvalued in some spots, especially early, but should win 23 games and find a seat on the NCAA Tournament’s so-called bubble.

Boise State and New Mexico will lead the Mountain West, and San Diego State could be surprisingly strong.

“In my eyes, Louisville is still the best team coming out of the gate,” Kornegay said.

Cardinals coach Rick Pitino has three starters, including senior guard Russ Smith, returning from the national championship team. The LVH posted Kentucky as the 7-2 favorite to win the title, followed by Louisville and Duke each at 6-1 and Kansas at 7-1.

It’s unfortunate to report this, but White is right when he says “Duke is loaded.”

If Wiggins is not the top pick in the draft, there’s a good shot it will be Blue Devils freshman Jabari Parker, another explosive 6-foot-8-inch forward. But if it’s not Wiggins or Parker, it could be 6-9 freshman Julius Randle of Kentucky.

It gets repetitive to report this, but Wildcats coach John Calipari has assembled a monster freshman class. And when this season ends, it won’t be with Kentucky losing an NIT game at Robert Morris.

Arizona, the best the West Coast has to offer, has its own stud 6-8 freshman forward in Aaron Gordon. UNLV will be a double-digit underdog to the Wildcats in Tucson on Dec. 7.

At this point, serious college basketball handicappers should have stopped by the Gamblers Book Club and picked up the Blue Ribbon yearbook. I’ve spent more time reading the 400-page book than I ever spent studying for a final exam in college.

Here’s what I think I know: Virginia Commonwealth, led by Shaka Smart, the sharpest young coach in the country, is primed for a big season and a potential Final Four run.

Oklahoma State, a 25-1 shot, can be great. Sophomore point guard Marcus Smart should have been the No. 1 pick if he had entered the NBA Draft last summer. I’m comfortable jumping to that conclusion.

■ CLOSING NUMBERS — Last week, I went 1-3-1 in college football. This week, I’ll try to do better and will add a couple of plays on Twitter. Here are three shots for Saturday (home team in CAPS):