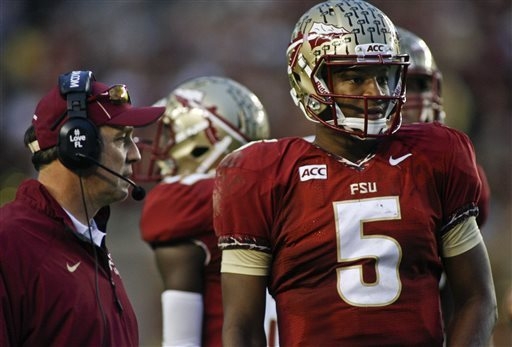 Florida State quarterback Jameis Winston look on from the sidelines during the first half of a game against Idaho in Tallahassee, Fla. (AP Photo/Phil Sears)

Once famous only for being Florida State’s supremely talented freshman quarterback, Jameis Winston now has more concerns than how to read a defense. He might need a defense attorney more than a pass-blocking left tackle.

Nothing left on the Seminoles’ schedule should block their path to the Bowl Championship Series title game in January. Their biggest threat is a suspension for Winston, the suspect in a sexual assault investigation.

And what could happen in a Tallahassee courtroom won’t stay there, as it’s already creating a ripple effect in Las Vegas sports books.

As of today, a line on a potential national championship game between top-ranked Alabama and Florida State is posted at several books. The Crimson Tide are favored by 4 points at the South Point and by 5 at the Golden Nugget.

“I think it’s all set. I don’t see Alabama or Florida State screwing up now,” Golden Nugget sports book director Tony Miller said. “The only stumbling block is Winston, if they yank him.”

The timeline is approximately two weeks for a decision on whether Winston will be charged. He faces a possible suspension if charged with a crime, and there’s a realistic chance Florida State could sideline its local superstar if it’s a felony charge.

Winston’s next big TV role might be on “Law &Order” instead of the Heisman Trophy ceremony.

Some sharp bettors are buying Alabama minus-4 tickets just in case. If they are without Winston, the Seminoles likely would be at least 10-point underdogs to Alabama. There are estimates as high as 11½. Either way, that’s a big middle and a major difference.

This could be the college example of the Green Bay Packers minus quarterback Aaron Rodgers.

“Would I be shocked? Absolutely,” Miller said of a Winston suspension. “I don’t think anything is coming down. If it happens, it happens, but I sure hope not. I don’t even know who the backup is, but I hope he’s taking some reps with the first-string offense.”

The backup quarterback is Sean Maguire, a redshirt freshman who recently was bumped up from third string because of an injury to the previous backup. Maguire has taken some snaps in a game, but he has not felt anything resembling the pressure of a BCS game and will not see anything like the defense Alabama coach Nick Saban can throw at him.

Florida State is a 27-point favorite at Florida on Saturday. That’s a gimme because the Gators (4-7) are a bigger mess than Miley Cyrus and Obamacare combined. The Seminoles then would be heavily favored to beat Duke for the Atlantic Coast Conference title.

Any suspension of Winston seems unlikely to happen until after the BCS braintrust puts Florida State in what would be a real scam of a championship game.

Of course, the Crimson Tide must roll through Auburn this weekend before the Southeastern Conference title game. And Ohio State is waiting in line, hoping for some kind of miracle. The Golden Nugget has made the Buckeyes 10½-point underdogs to Alabama and 6½-point underdogs to Florida State.

Winston has passed for 32 touchdowns with seven interceptions, and the Seminoles have scored 41 points or more in each of their 11 wins. If his eligibility gets intercepted, Florida State is a goner, too.

The last massive college football betting weekend is upon us, and The Gold Sheet handicapper Bruce Marshall has a book full of plays.

In rivalry games, Marshall (goldsheet.com) recommends Washington State as a 16-point underdog at Washington today and Indiana as a 21-point home favorite over Purdue on Saturday.

As for the get-out game late Saturday, Marshall plans to go with winless Hawaii minus-6½ over Army.

“Five losses on the last play of the game have yet to take the fight out of Hawaii, which pushed San Diego State and Wyoming into OT the past two weeks,” Marshall said. “With no more chances to avoid the big donut, expect a kamikaze effort from the Rainbow Warriors.”

■ CLOSING NUMBERS — My record is 9-7 the past three weeks, including 3-5 last week. Speaking of kamikaze efforts, here are eight plays for today and Saturday (home team in CAPS):