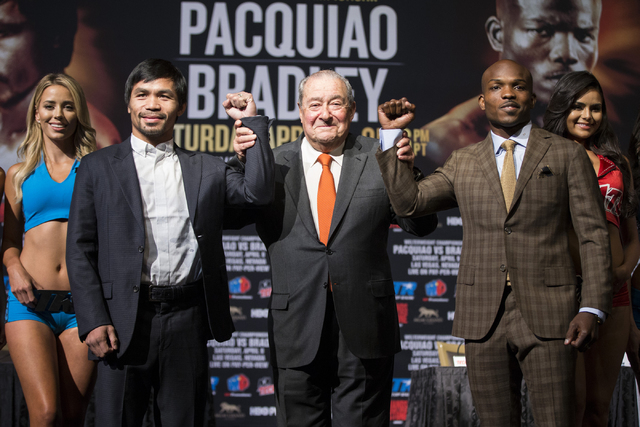 In his prime, and even when he started to decline, Manny Pacquiao was a major attraction. But 11 months after he was involved in the most hyped event in boxing history, the thrill is gone.

Pacquiao is set to fight Timothy Bradley for the third time Saturday night and, using the wagering handle as a barometer, there is little buzz.

Pacquiao is a minus-220 favorite in the main event at the MGM Grand Garden. A majority of bettors are siding with Bradley at plus-175.

“Pacquiao has been a hard sell in his last three or four fights. We used to draw sick money to him,” Rood said. “The money we have been taking has been mostly on Bradley.”

In May, Pacquiao barely put up a fight in a lackluster 12-round unanimous decision loss to Floyd Mayweather Jr. Mayweather coasted as a 2-1 favorite, and Pacquiao angered fans by blaming his poor performance on an undisclosed torn rotator cuff in his right shoulder.

Mayweather-Pacquiao was a huge hit at the betting windows, drawing about $25 million in handle at MGM Resorts books and an estimated $80 million in the state. Rood said Pacquiao-Bradley might bring in 10 percent of that amount.

Bradley defeated Pacquiao by split decision in June 2012. Pacquiao evened the score in the April 2014 rematch with a unanimous decision win.

“Manny is not really an exciting fighter anymore,” said Dave Cokin, a Las Vegas handicapper (SmokinCokin.com). “This fight is going to go the distance.”

Rood said he anticipates much more entertainment than in Pacquiao’s pillow fight with Mayweather.

“I would be surprised if it’s an early, dominating knockout by either guy,” Rood said. “But if Pacquiao is healthy now, and he does think this is going to be his last fight, he’s not going to leave anything in the tank. If he’s 70 percent of what he used to be, I think he should win this fight.”

Pacquiao has announced plans to follow Mayweather into retirement. However, boxers have been known to return for a big payday, so do not count out a Mayweather-Pacquiao sequel.

“If Pacquiao loses, how much more interest can there be? If he wins in dominant fashion and looks great, there might be talk of a rematch,” Rood said.

“If I was in jail and someone said I had to pick the winner to get out, I would probably pick Pacquiao.”