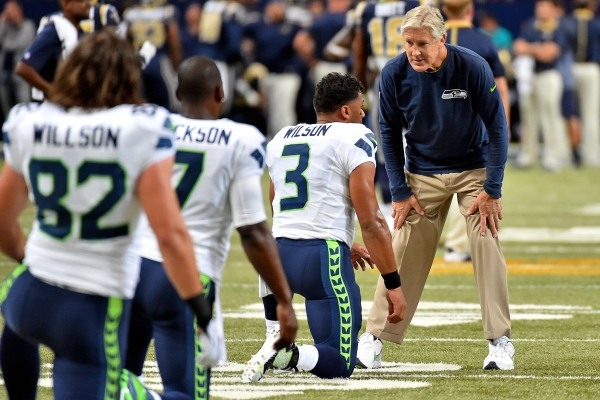 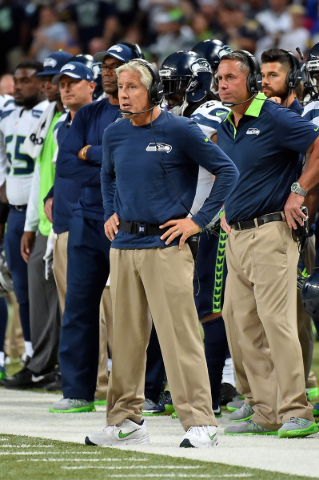 Believe it or not, Pete Carroll is the second-oldest head coach in the NFL. It’s hard to believe because of his up-tempo approach to life, and he will need all of that energy to lead the Seattle Seahawks through this season.

These are trying times for the Seahawks, who have dropped their past two games while dealing with more drama than a group of teenage girls.

A contract squabble with quarterback Russell Wilson was settled, followed by a contract holdout by star safety Kam Chancellor that continues. And now, running back Marshawn Lynch’s mom is mad.

Everything was fine until Carroll and offensive coordinator Darrell Bevell put their heads together and made arguably the worst call in Super Bowl history. Imagine how different things might be if Lynch had been handed the ball at the 1-yard line on second down against a gassed New England defense that Lynch gashed to the brink of the goal line.

Instead, Carroll and Bevell allowed Wilson to throw, his pass was picked off, and Seattle is aiming to avoid its third straight loss when the talk could be about a potential third straight Super Bowl win.

The Seahawks opened the season last week with an overtime loss at St. Louis. On the game’s final play, Lynch was handed the ball on a fourth-and-1 run and got stuffed. His mom — @MommaLynch24 if you want to follow her on Twitter — criticized the play and called for Bevell to be fired.

Meanwhile, the Green Bay Packers have had several months to think about how they blew the NFC Championship Game in Seattle. To make matters worse, they lost wide receiver Jordy Nelson, the favorite target for Aaron Rodgers, to a season-ending injury in August.

Drama aside, there is a game to dissect Sunday night, when the Packers finally get the Seahawks at Lambeau Field. Revenge is not really a factor, because a Super Bowl trip is not on the line this week.

Green Bay’s biggest advantage is Rodgers, who lights up all defenses on his home turf and probably will do something similar to the Seahawks, who allowed the Rams’ Nick Foles to throw for 297 yards and post a passer rating of 115.8.

The Packers’ biggest problem will be run defense. In an unimpressive win at Chicago, Green Bay allowed 402 total yards, including 189 rushing on 5.7 yards per carry. The Bears, who converted on 11 of 17 third downs, might have won the game if not for a predictable Jay Cutler error.

Seattle has weaknesses in its secondary that Rodgers will attack. But he will do it without the help of Bryan Bulaga, the team’s $33 million right tackle who suffered a knee injury in Thursday’s practice. Green Bay’s defense will get tested by Lynch, Wilson and tight end Jimmy Graham.

With the Seahawks off a loss, I’ll expect their best effort and take Carroll to cover as a 3½-point underdog.

• Texans (+3) over PANTHERS: After a lousy opener, Houston coach Bill O’Brien pulled the trigger and switched quarterbacks by benching Brian Hoyer and promoting Ryan Mallett. Still, the difference should be the ability of J.J. Watt and a fast Texans defense to shut down Cam Newton. Carolina’s best defensive player, middle linebacker Luke Kuechly, is doubtful while recovering from a concussion. The Texans went 5-2 against the spread off a loss last season, so O’Brien typically bounces back.

• STEELERS (-6) over 49ers: This is mostly a situational play. Pittsburgh is playing on extra rest, and San Francisco is working with a short week. The 49ers travel across the country after an emotional win over a Minnesota team that was terrible Monday. Unlike Teddy Bridgewater, who failed to execute a poor Vikings game plan, Ben Roethlisberger can burn the 49ers’ blitzing defense.

• BENGALS (-3) over Chargers: Cincinnati is 13-2-1 at home the past two seasons. San Diego is getting too much credit for its comeback victory over Detroit, which has a weak defense that wore down in the heat. Bengals quarterback Andy Dalton has loaded weapons in a well-rounded offense, and this week he will get A.J. Green more involved.

• EAGLES (-5) over Cowboys: The Dallas offense is missing wideout Dez Bryant and, of course, running back DeMarco Murray. Tony Romo will be forced to do too much against a solid Philadelphia defense. Expect the Eagles to rebound after coach Chip Kelly’s embarrassing Monday in Atlanta.

Las Vegas Review-Journal sports betting columnist Matt Youmans can be reached at myoumans@reviewjournal.com or 702-387-2907. He co-hosts “The Las Vegas Sportsline” weekdays at 2 p.m. on ESPN Radio (1100 AM). Follow: @mattyoumans247.