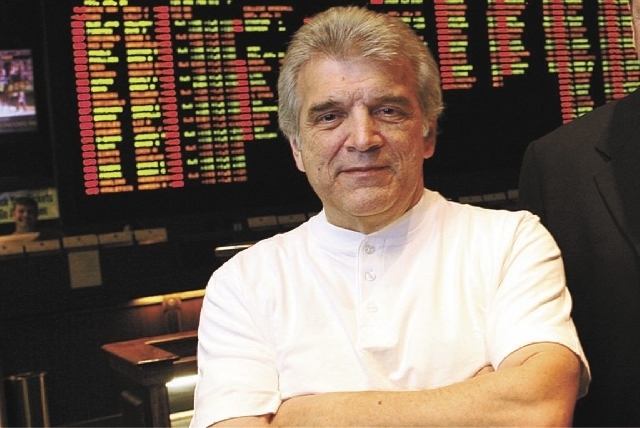 Almost every summer, Jimmy Vaccaro boards a train in Reno and heads home to the Pittsburgh area. The cross-country trip takes him through glamorous cities such as Omaha, Nebraska, where most riders probably pray the train does not break down or stop for any reason.

Vaccaro goes the long way because he’s terrified of flying. He’s also no fan of wearing a coat and tie, but he put on a sport coat for a brief time on this trip.

In the middle of his vacation last week, Vaccaro went to Washington, D.C. for business. He was asked to speak on a panel at the Gaming Experts Forum hosted by the American Gaming Association. The potential legalization of sports betting on a national level was a major topic of discussion.

“It was interesting stuff,” said Vaccaro, a Las Vegas bookmaker since the 1970s. “It’s more of a fact-finding thing.”

The conference was attended by academic professionals, gaming industry leaders, politicians and members of the sports media. On the subject of sports wagering, even the smartest people need some education.

Two significant events in the past year inspired the AGA to push more aggressively for the expansion of legal sports wagering. First, state lawmakers were forced to confront the daily fantasy sports (DFS) issue and how gambling is defined.

“DFS is the gift that keeps on giving. It’s mainstreamed our business,” Sara Rayme, the AGA’s senior vice president of public affairs, said.

Next, less than two weeks ago, the NHL awarded Las Vegas its first major league franchise. A hockey team playing on the Strip is widely viewed as hard evidence there is evolution in the acceptance of sports betting.

“It’s something that’s broken the ice, pardon the pun,” ESPN business analyst Andrew Brandt said. “Other leagues may or may not follow, but it seems likely they will because these walls seem to be breaking down.”

The next wall that would need to fall is in New Jersey, a state that has attempted for more than five years to legalize sports betting by challenging the Professional and Amateur Sports Protection Act (PASPA). The federal law instituted in 1992 prohibits all but four states — Nevada, Delaware, Montana and Oregon — from offering a form of sports wagering.

“If they don’t repeal PASPA, the idea of sports betting nationally is not going to happen for quite a while,” Vaccaro said. “It gets nowhere unless they repeal it in New Jersey.”

The most optimistic speakers at last week’s conference set the timetable for the expansion of legal sports wagering at three to five years. When politicians are involved, nothing gets done quickly. But the agenda is advancing on a faster track on several levels, and there are positive signs all over the map.

Let’s start at home. The NHL was the first to welcome Las Vegas, and the other three major pro leagues are quickly warming up to the market.

NBA commissioner Adam Silver was the first figure of major influence to publicly acknowledge what’s beneficial about legalized sports betting. He actively lobbies for it. When he repeatedly talks about it, he opens ears, eyes and minds.

There are high-ranking executives in the NFL front office — excluding commissioner Roger Goodell — and powerful owners who support the Oakland Raiders’ plan for relocating to Las Vegas. As recently as two years ago, the NFL seemed implausible here. Most of us thought it never would happen. Think again.

Major League Baseball commissioner Rob Manfred recently said he views Las Vegas as a “viable” market and added, “I would not disqualify it just because of the gambling issue.”

On a political level last week, the U.S. Conference of Mayors adopted a resolution calling for the legalization and regulation of sports betting nationwide. The Pennsylvania House of Representatives also passed a resolution urging Congress to repeal PASPA.

By bringing betting from the underground, state lawmakers are finally seeing a way to tax sports betting revenues and eliminate the perceived evil element.

The Nevada sports wagering handle for 2015 was $4.2 billion, and it is projected to approach $5 billion in 2016. It’s estimated that $150 billion to $400 billion is bet illegally in this country through underground bookmakers, offshore books and pools.

Legalized sports betting actually would serve to protect the integrity of the games, something Silver fully understands and Goodell still does not seem to get.

Boyd Gaming sports book director Bob Scucci joined Vaccaro at the conference. Vaccaro said he invited a group of North Dakota professors to spend a football weekend at the South Point and experience how the sports book operates.

“Once you see a couple days behind the counter, you will see it all to a different degree,” Vaccaro said. “We are as transparent as any industry in the world.”

Vaccaro even vowed to pay for the hotel rooms.

And he will not force anyone to ride the train through Omaha.