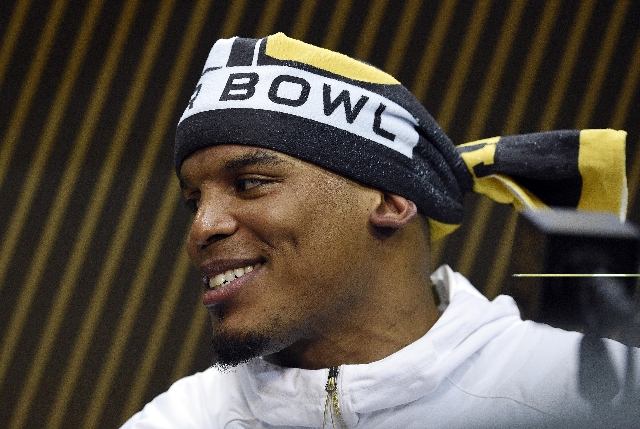 It’s often said the next-best thing to being at the Super Bowl is being in Las Vegas to watch the game. But that’s wrong. It’s better to be here.

Instead of coughing up around $1,000 for a ticket and overpaying for food, drinks and parking, use the cash to bet and try to double your money. Instead of squirming in a stadium seat that’s too small, stretch out, walk around a sports book and see all of the TV commercials. Instead of calling it an early night in the Bay Area, party all night on the Strip, where there is no last call.

Super Bowl weekend turns Las Vegas into a zoo, the only difference being the animals here are in casinos instead of cages. By Sunday morning, lines will form at betting windows and snake as far as the eye can see.

But on Thursday, it was calm before the storm. I stopped by seven sports books around town to see what was happening three days before Super Bowl 50.

Golden Nugget — Horse racing was the main attraction at 11 a.m. Horseplayers tend to be grumpy old men who have no patience for waiting in line, and that includes me. The good news is there were no lines at the windows. Football bets were only trickling in, and in the past couple of days, some bets even trickled in on the Denver Broncos.

Tony Miller, the Golden Nugget book director, said the biggest bet he has taken is $50,000 on the Carolina Panthers when the line opened at minus-4.

“It was a 10-to-1 ticket count early,” Miller said. “Everybody loves Cam Newton.”

More on the Carolina quarterback in a minute. The Panthers, Miller said, are no longer drawing around 90 percent of the money. It’s closer to 70 percent. The line is holding steady at 5½ after reaching 6 early in the week. Miller, who normally plays favorites, said he’s betting on the underdog this time.

Binion’s Gambling Hall — The William Hill book was not exactly bustling with action. Five guys — two appeared to be sleeping — were seated in front of a small wall of TVs. None was paying close attention to the soccer game featured on the screens.

For the first time this year, the Nevada Gaming Control Board approved wagering on the Super Bowl Most Valuable Player. Newton opened as the minus-120 favorite, and the price has been bet up to minus-160. Carolina is minus-220 on the money line to win outright. The winning quarterback was voted MVP seven of the past nine years.

“There’s a lot of interest in that prop,” William Hill book director Nick Bogdanovich said. “Let’s face it, if Carolina wins, Cam is more than likely going to be the MVP.”

For those who like long shots and lotteries, William Hill offers a multisport progressive parlay card with a jackpot currently at $223,505. It’s $5 to play, and you can cash in by picking 15-for-15 straight-up winners.

Looking forward to Sunday, Bogdanovich said, “It’s a busy day, but it’s a fun day. Hopefully, it will be a competitive game. People bet their brains out. You start posting props as soon as the coin is flipped.”

Red Rock — Hundreds of Super Bowl propositions are posted. I asked Dave Bonertz if he planned to bet.

“Already bet the game. I bet on the flip of the coin,” he said.

The only bet he made was on tails. Bonertz wore a black T-shirt with “This Guy Needs A Beer” in white letters.

“Born and raised in Nebraska,” he said, explaining he now lives two hours north of Anchorage, Alaska, and works in the oil fields. “Right now, we’re gaining about 5½ minutes a day of sunlight. At 1 in the morning, you can go out and play horseshoes or basketball and you don’t have to worry about turning the lights on. The coldest I’ve ever seen it is 108 below with the wind chill. You have to hold your breath.”

It’s definitely better to be in Las Vegas for the game than in Alaska.

Holt did not say it, but according to those who know, one of the world’s most respected sports gamblers made a big move Wednesday on the Broncos. That would be Billy Walters, and that would be major reason the line dropped from 6 to 5½.

Boxing champ Floyd Mayweather Jr., who placed a major wager on the Broncos two years ago and lost, is not showing his hand yet, according to those who know. Mayweather prefers the M Resort book. The guess is Mayweather will come in on the Carolina side.

South Point — There were long lines at the betting windows at 4 p.m., but most of the action was on basketball. Veteran oddsmaker Jimmy Vaccaro said the Super Bowl handle is soaring.

“If we don’t break the record,” Vaccaro said, “I’ll be super surprised.”

Michael Gaughan, owner of the South Point, made a wise move five years ago by bringing Steak ‘n Shake to his hotel-casino, where hot dogs sell for a bargain price of $1.25. Here’s what Las Vegas needs next — Rick Pitino coaching the UNLV basketball team and the Raiders playing in a new stadium.

Sunset Station — About 75 percent of the Super Bowl betting action shows in the last 48 hours before kickoff. Chuck Esposito stood behind the counter and said, “I think the masses will bet Carolina.”

Esposito is the Elias Sports Bureau of book directors. He has stats on everything. He could tell you Denver was an underdog in five games this season and went 4-1 straight up and 5-0 against the spread.

Westgate — An estimated 400 props are posted here. More impressive, a new LED video wall, installed at a cost of more than $12 million, stretches from one end of the book to the other.

“It’s the largest indoor LED video wall in the world, bigger than the one in the Cowboys’ stadium,” book director Jay Kornegay said. “That’s what they tell me.”

This would be a good place to watch the Super Bowl, far better than in a too-expensive, too-small stadium seat in Santa Clara, California.

Las Vegas Review-Journal sports betting columnist Matt Youmans can be reached at myoumans@reviewjournal.com or 702-387-2907. He co-hosts “The Las Vegas Sportsline” weekdays at 2 p.m. on ESPN Radio (1100 AM). Follow him on Twitter: @mattyoumans247