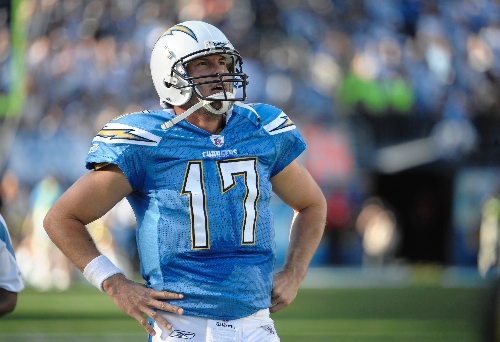 Obviously, it’s not aesthetically impressive and some NFL lovers are hating what they are witnessing, but I’m warming up to the carnival sideshow known as Tim Tebow.

One week, he sticks it to Rex Ryan and the trash-talking New York Jets. The next, he steals the thunder — what was left of it, anyway — from the San Diego Chargers.

Almost all teams develop and reflect the personality of the head coach, and we’ve watched the Chargers limp along and go lame for too long under Norv Turner. But his time has expired.

Tebow helped put Turner and the Chargers out of their misery Sunday, when the Denver Broncos pulled out a 16-13 overtime victory. The offenses were so inept, the game almost ended in a tie.

But the Broncos’ defense is taking on Tebow’s junkyard dog personality, and the underdog paid off at the betting windows. San Diego opened as a 6-point favorite and the line closed at 4½. The action was split, as are the opinions on Tebow.

"The bigger money was on Denver and the small tickets were on San Diego," Las Vegas Hilton sports book director Jay Kornegay said. "How about Tebow? The public has been betting against the Broncos since Tebow took over, but that ratio has reduced every week.

"The bettors are tired of getting their teeth kicked in. It’s a slow process for Denver to become a public team, and it is certainly not a public team. There are still plenty of non-believers out there, which I can understand if you watch the Broncos."

It’s easy to believe in the Denver defense, led by pass rushers Elvis Dumervil and rookie Von Miller, who put the pressure on Chargers quarterback Philip Rivers and made him look more awkward than usual.

The Chargers have lost and failed to cover six straight, and the ratio of fools who are betting on them is reduced every week.

With 3:31 remaining in overtime and San Diego facing third-and-6 at the Denver 31-yard line, Turner showed why he’s a misfit for his job. After calling two running plays, he called a third, and Mike Tolbert was stuffed for a 4-yard loss. Why not let Rivers throw for the first down?

Tebow ran for 67 yards on 22 carries, which stat-geek researchers declared the most rushing attempts by an NFL quarterback since at least 1950. Some critics say Tebow is not a real NFL quarterback. But he completed half of his 18 throws for 143 yards for a higher passer rating (95.4) than Rivers (77.1).

This is not meant to prop up Tebow as the future of the Broncos. He’s cheap entertainment, more like a lap dance than a long-term relationship headed for the Super Bowl.

After a 1-4 start, Denver is 5-1 with Tebow as the starter. He has passed for seven touchdowns with one interception.

"The thing about Tebow is he doesn’t turn the ball over. As ugly as it is, and it’s ugly football most of the time, he’s not making any dumb plays," Kornegay said. "When you have a great defense, it can make poor quarterback play look better. With the formula of good defense and no turnovers, the Broncos are able to keep it close and find a way to win. Tebow is really just driving the bus, and he’s getting more praise than he deserves."

Favorites and underdogs split 12 games against the spread Sunday, and with several of the decisions up in the air in the final few minutes, we see why wagering on the NFL is often a coin flip.

Atlanta held off Minnesota for a 24-14 win and cover, but the Falcons were fortunate 9½-point favorites. After Percy Harvin returned a kickoff 104 yards to the Atlanta 3 with six minutes to play, the Vikings’ brain trust scoffed at a field-goal try and Toby Gerhart’s fourth-down run from the 1 was stopped cold.

Curtis Painter was intercepted in the end zone twice in the last five minutes as the winless Indianapolis Colts, 3½-point underdogs, fell to the Carolina Panthers, 27-19.

Houston, a 6½-point favorite, was held scoreless in the second half but held on for the cover in a 20-13 victory over Jacksonville. Texans quarterback Matt Leinart and his cheesy mustache were lost for the season after Leinart’s first-half injury.

The blowout of the day was no surprise. Tom Brady passed for 361 yards and three touchdowns as the New England Patriots, 3-point favorites, put a 38-20 beating on Philadelphia.

"Losing our three biggest decisions of the day pretty much sealed our fate for Week 12," Kornegay said. "We needed the Colts again. We needed the Jaguars. And we needed the Eagles. It was not a disaster by any means, but it was a small loser."

A memorial gathering for friends of Barry Holthaus will be held from 6 to 9 p.m. Wednesday at the Hard Rock sports book. Holthaus, 47, a popular Las Vegas sports bettor, died Nov. 6.

Contact sports betting columnist Matt Youmans at myoumans@reviewjournal.com or 702-387-2907. He co-hosts the "Las Vegas Sportsline" weeknights at midnight on KDWN-AM (720) and thelasvegassportsline.com.