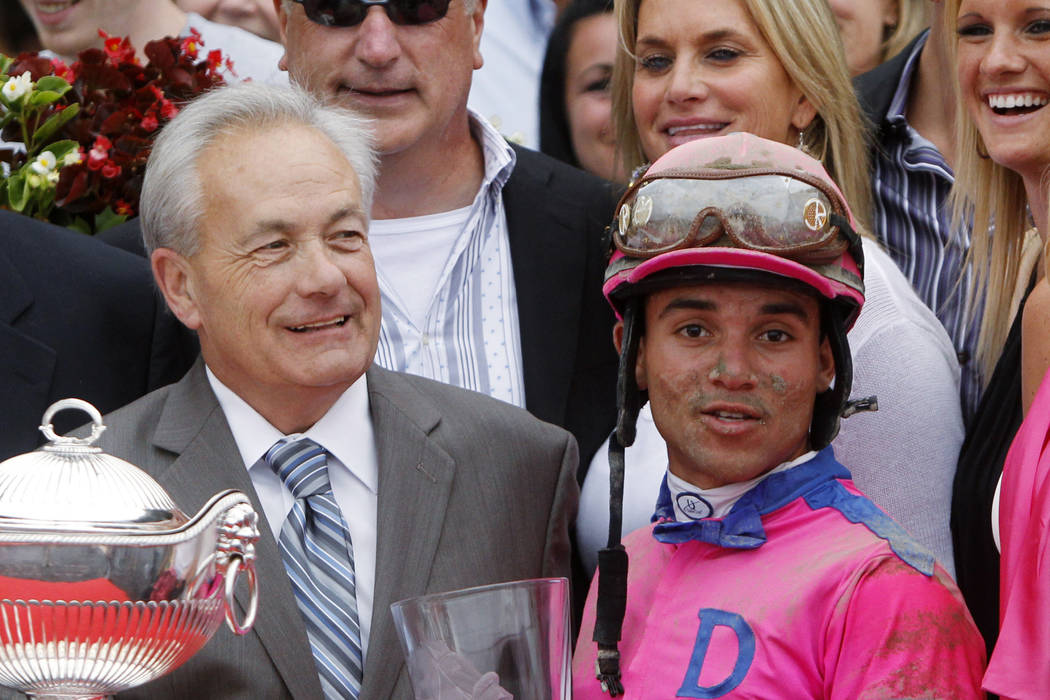 I suspect that no one is as interested as I am in the decision by The Stronach Group, the owner of Santa Anita and Golden Gate Fields, and then Del Mar to ban trainer Jerry Hollendorfer from the grounds, but I’m going to spill a bit more ink on the case anyway — as I’m sure you’d have me do if someone denied you the right to make a living without any explanation.

A Superior Court judge in San Diego on July 26 granted a preliminary injunction that ended Del Mar’s ban of the Hall of Fame trainer.

The judge concluded that, “Mr. Hollendorfer will suffer irreparable harm if an injunction is not issued” and added that, “The plaintiffs have also submitted sufficient evidence for the court to conclude they are likely to prevail on the merits of their claims.”

The upshot is that Hollendorfer has been given stalls at the track and will begin entering horses under his name. Fittingly, the first horse the 72-year-old trainer will saddle is stable star Vasilika in Saturday’s Yellow Ribbon Stakes.

If you’ve forgotten the backstory, Hollendorfer had four horses in his shedrow die during the hideous Santa Anita meeting that ran through winter and spring, in which a total of 30 horses perished. The Stronach Group apparently decided to make Hollendorfer the sacrificial lamb and ordered him off the grounds there and at Golden Gate Fields near the end of the meet.

Del Mar followed suit, apparently fearing that a breakdown by any Hollendorfer horse would bring down the wrath of PETA and other animal rights activists.

Hollendorfer won’t be quite the force he usually is at Del Mar, as he only has 17 horses this year compared to 50 last year, according to his attorney, Drew Cuoto. He had to sell his ownership shares in many horses in order to transfer them to his former assistant, Dan Ward, who will be running many of those horses under his name.

Cuoto hinted that other legal actions might be forthcoming. “One step at a time,” he said of last week’s court victory, “but Santa Anita, the Stronach Group and Golden Gate Fields are all on the radar.”

The #RJhorseracing handicapping crew is again going bicoastal this week, tackling the $1 million Whitney Stakes, a stacked Grade 1 that is a “win and you’re in” contest for the Breeders’ Cup Classic, at Saratoga and the aforementioned $200,000 Yellow Ribbon Stakes at Del Mar.

The former, a 1⅛-mile test on the main track at the Spa, drew four of the top older horses in training — McKinzie, Thunder Snow, Vino Rosso and Yoshida. The crowd ‘cappers are sticking with 6-5 morning line favorite McKinzie, a 4-year-old son of Street Sense trained by Bob Baffert who has finished first or second in all but one of his 11 career starts. They like Thunder Snow (3-1) and Vino Rosso (6-1) to complete the trifecta.

“McKinzie is always well placed and has won or been within a length of the winner in 10 of his 11 races,” wrote handicapper Joe “Ponypicker” Mainardi of the group’s choice.

Can’t knock McKinzie, but I will try to beat him with Preservationist (4-1), who knocked off another top older runner in Catholic Boy last out in the Suburban Stakes at Belmont. I’ve got McKinzie to place and Vino Rosso to show.

In the Yellow Ribbon, a 1 1/16th-mile tour of the turf course for fillies and mares, the crew is expecting the 7-5 morning line favorite Vasilika to make Hollendorfer’s 2019 debut at Del Mar a memorable one. They’ve got Beau Recall (7-2) penciled in for second and Valedictorian (6-1) in third.

Betting against Vasilika has been a quick route to the poor house since Hollendorfer claimed her for $40,000 on Feb. 11 last year and you might think I’d learn my lesson after trying to beat her once before in one of our featured races. But I think Toinette (6-1) can spring the upset for fellow Hall of Fame trainer Neil Drysdale and little-known but talented jockey Ruben Fuentes.

I’ll use Vasilika to place and Beau Recall to show.