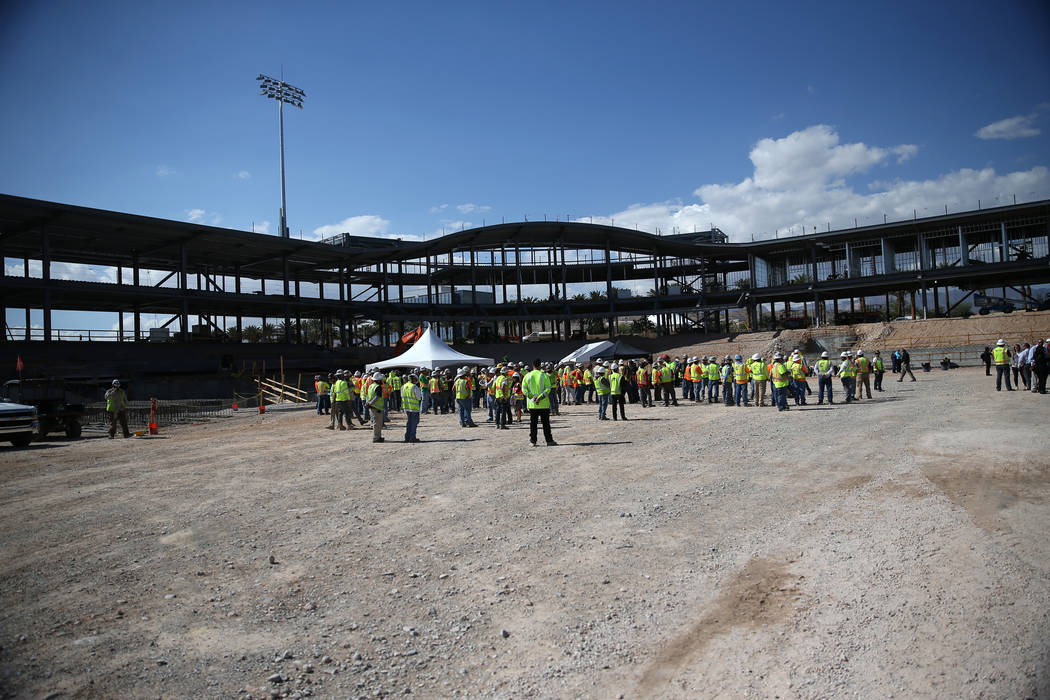 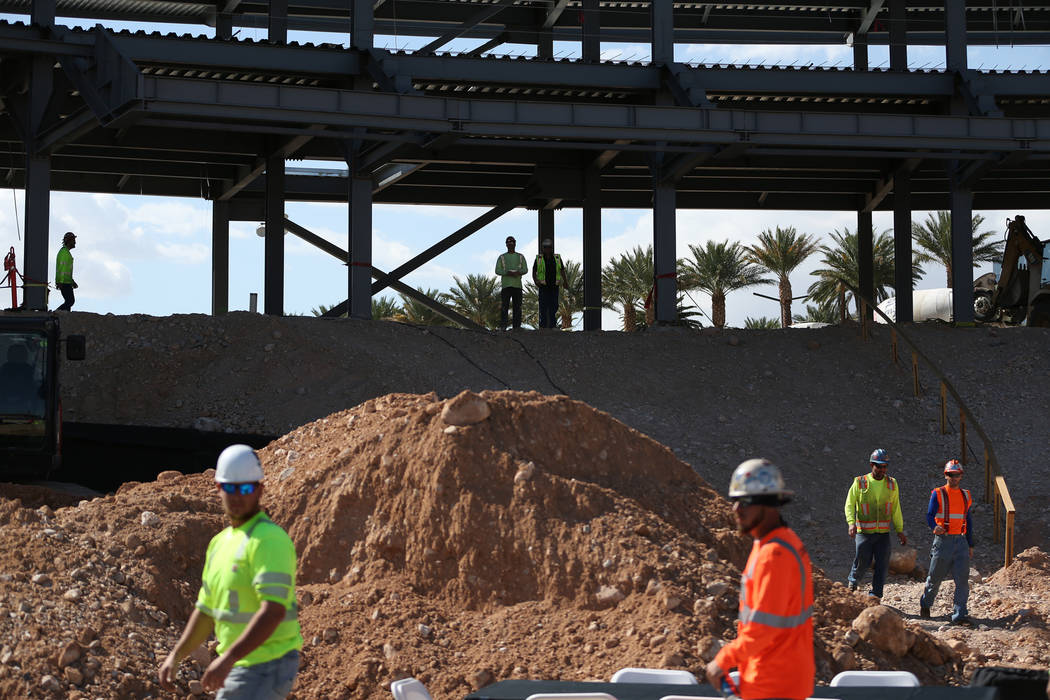 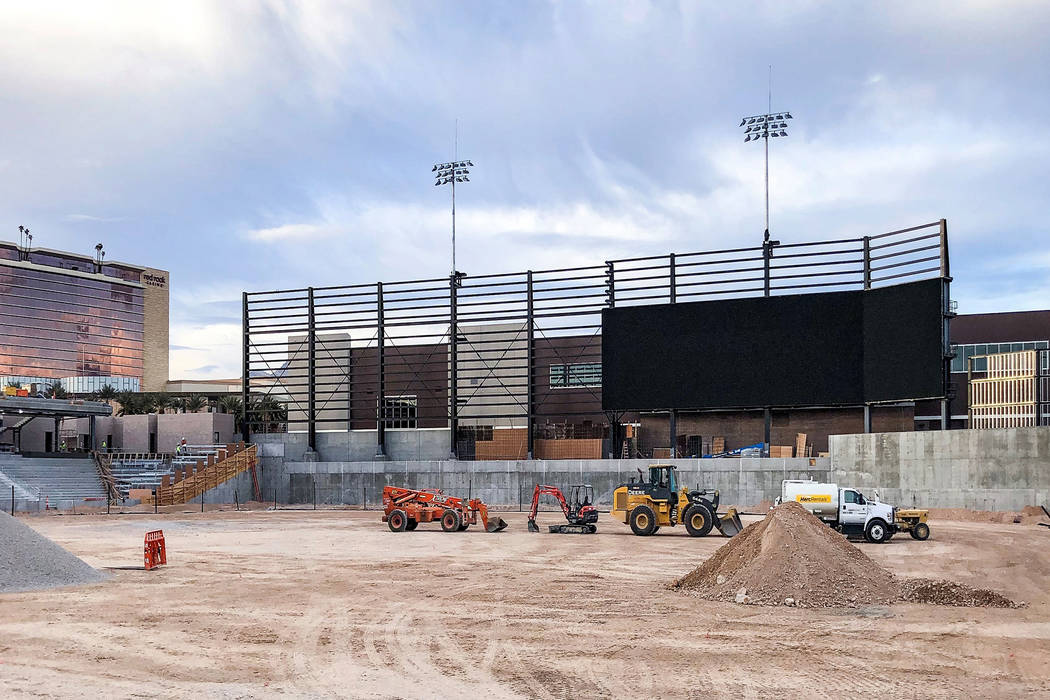 The frame for Las Vegas Ballpark’s videoboard is being constructed. The display is scheduled to be the largest of its type in minor league baseball. (Howard Hughes Corp.) 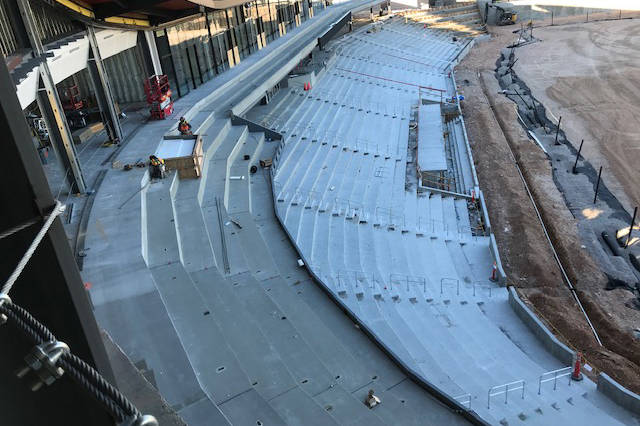 The third-base side of the under-contruction Las Vegas Ballpark. (Herb Jaffe) 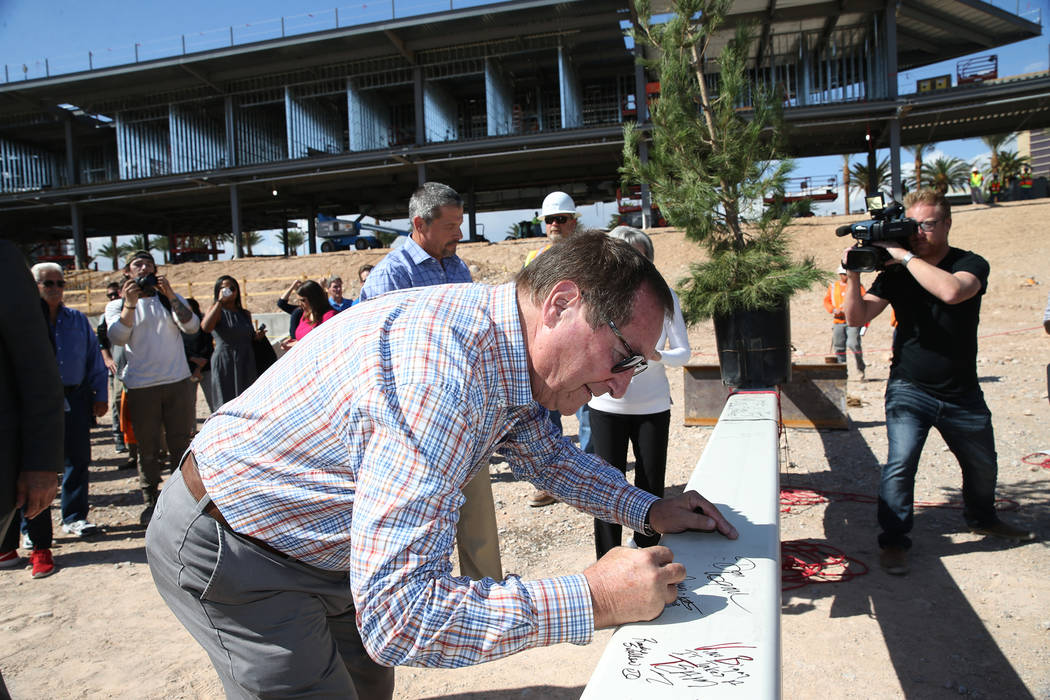 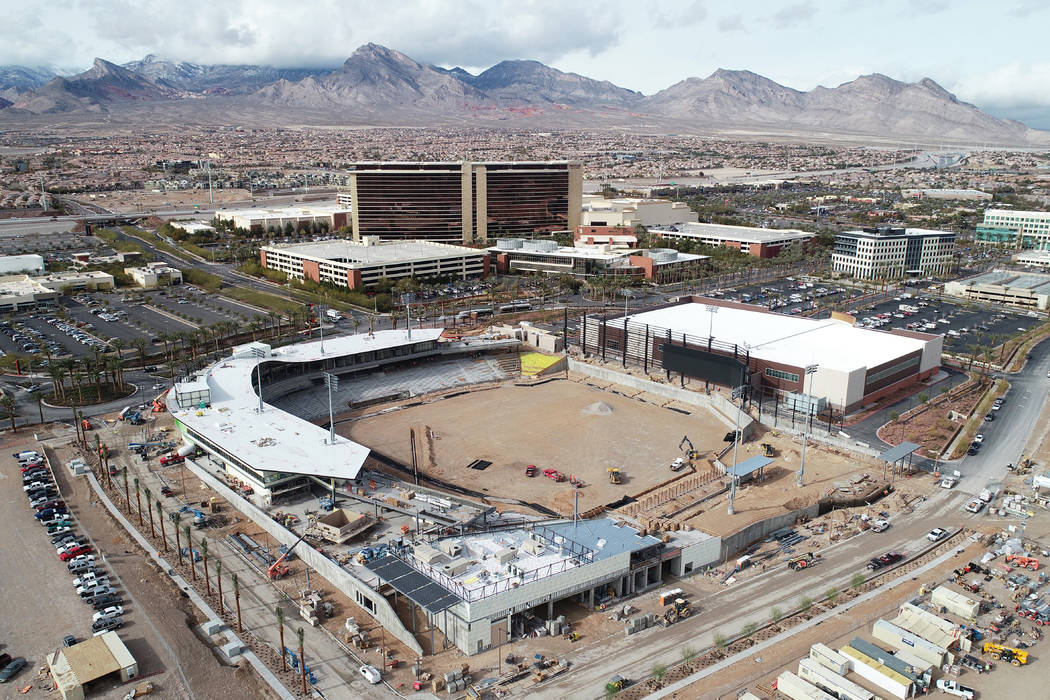 The Las Vegas Ballpark in Summerlin is shown under construction in this aerial photo taken on Jan. 16, 2019. (The Howard Hughes Corporation)

Two things were learned on a recent pilgrimage to the Las Vegas Ballpark construction site:

The first was that with the exception of the construction worker from the Village People, nobody looks good in a hard hat.

The second was that there still is a lot of work to be done before April 9, when the Triple-A Aviators will christen their new ballyard against Sacramento.

I was issued a hard hat that must have been designed for San Francisco Giants manager — and former Las Vegas Stars catcher — Bruce “Buckethead” Bochy. Bochy’s batting helmet size was 8¼.

My hard hat looked more like a soup kitchen cauldron. Aviators’ president Don Logan had to show me how to adjust it.

Manny Machado probably could have worn it in its original configuration.

Much progress had been made since the last time I had toured the ballpark in downtown Summerlin. That was in December when the Aviators unveiled a new logo that supposedly will grow on me but has yet to germinate.

You couldn’t have played Wiffle ball in Las Vegas Ballpark in December. Now the lights are up, and you might be able to choose sides were it not for the forklifts.

Our tour guide’s construction helmet fit much better than mine. Her name was imprinted on back.

Cindy Delano said there were 82 days before opening night. Now there are 71. She suggested a few amenities might not be finished when ceremonial first pitches are thrown out. These included the swimming pool and splash pad beyond the right-field fence.

Prediction: The owner’s box on the suite level will be finished and fully appointed long before somebody tosses a 32-ounce beer into the deep end of the swimming pool.

“The only problem with the pool is getting the truck in there to pour (concrete),” Logan said, adding he was confident the pool would get done before it was warm enough to use it, and that he wasn’t worried about the rest of the ballpark being finished by opening night.

“No, I’m not. Pat Delano is our project manager (this explains why our tour guide was sporting a personalized hard hat), and he’s done a lot bigger jobs than this. They’re comfortable with the time frame, and as long as they’re comfortable, I’m comfortable.”

Logan said the ballpark changes dramatically with almost every day it doesn’t rain or there isn’t a lousy Super Bowl.

“I was gone to L.A. recently and then came back, and I was shocked by how much gets done (in a short period of time),” he said.

Having tripped over a power saw when Cindy Delano was showing where one of the 88 or so Las Vegas Ballpark watering holes would be, I might have been inclined to cup my hands over my ears a la Bruce Bochy in requesting a replay review. With so much work to be done, New York certainly would have overturned Logan’s call.

But I watch a lot of HGTV for some reason, and when time is running out to finish the fixer-upper, it seems Chip and Joanna always get it done just as the homeowners are walking up to the front porch.

It’s amazing what can be accomplished after additional crews are brought in and the project manager agrees to paying overtime wages.

I also remember the day before the first race at Las Vegas Motor Speedway. As race cars were zipping around the track on qualification runs, workers still were putting down sod in the tri-oval on the main straightaway, and restrooms on the concourse were only half-built. The next day when the gentlemen started their engines, there was grass in the tri-oval and a place to go to the bathroom.

To reiterate what Don Logan said, progress is being made every day.

During the tour on Jan. 24 it was pointed out the scoreboard in left field was the 21st largest in professional baseball. On Monday, team principal Howard Hughes Corporation issued a news release stating the LED video display — 3,930 square feet, 31 feet high, 126 feet wide — will be the largest in the minor leagues.

So in just 11 days, Las Vegas Ballpark went from having the 21st-largest scoreboard, which frankly doesn’t sound all that impressive, to having the largest video display in all of minor league baseball.