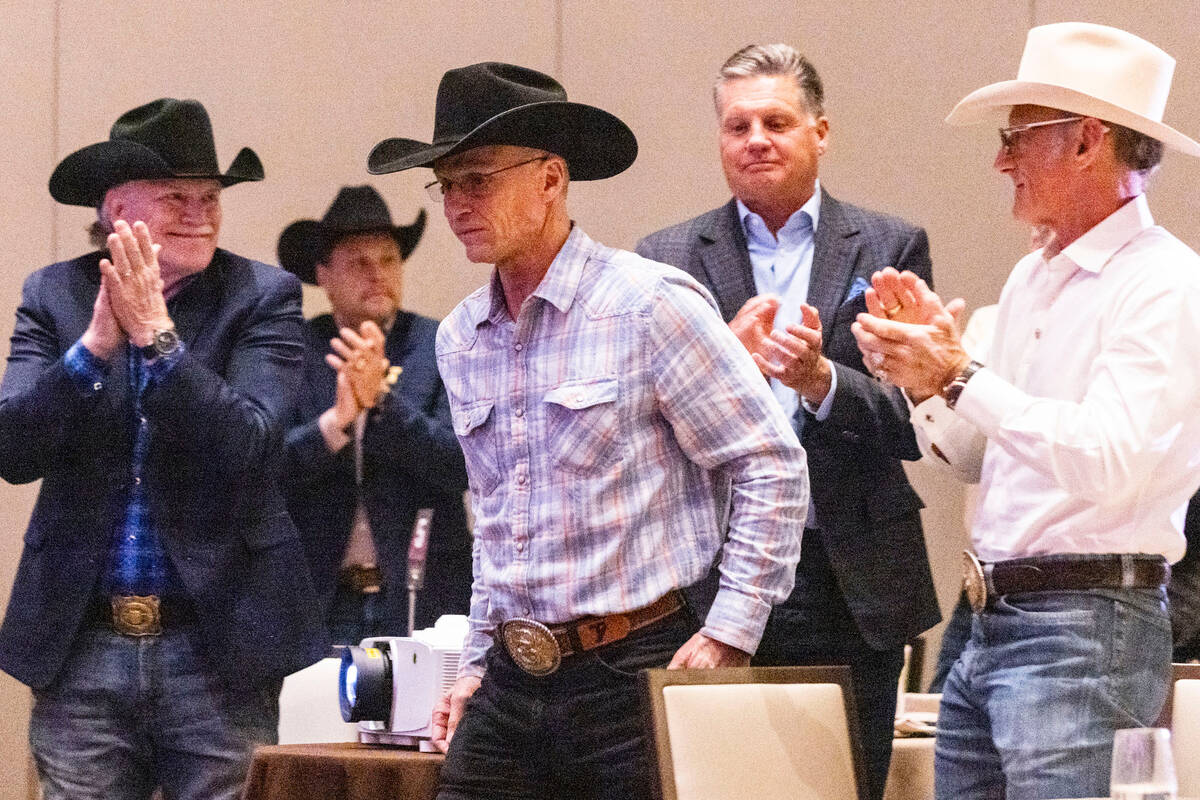 As they were getting ready to lift Ty Murray’s name to the Thomas & Mack Center rafters as part of the new Vegas NFR Icon program, it never occurred to the pro rodeo legend that he would be sharing the same air space as Larry Johnson and UNLV’s other basketball greats.

“I never thought about that,” the seven-time world champion all-around cowboy champion said about he and the star of UNLV’s 1990 national championship team having been chums at Odessa (Texas) Junior College.

“I used to go to his basketball games, and he used to come and watch me ride. Watching him play with those guys in Odessa was like watching a man play with a bunch of first-graders.”

Murray said neither he nor Johnson could have imagined their careers intersecting in the rarefied air above the storied basketball court and temporary rodeo arena more than 30 years later.

“But I think we were both striving for that,” said Murray, whose banner ceremony followed ones celebrating Trevor Brazile, the 14-time all-around champion, and barrel racing great Charmayne James.

The 53-year old Murray still looks fit enough to ride, though he now wears eyeglasses that smack of Johnson’s “Grandmama” television commercial character. He said the two don’t see each other often anymore, though Murray vividly recalled the last time they were together during their primes. It was at a doctor’s office.

“He was like ‘Man, I can’t believe what you’ve done’ — this is the guy who at the time had just signed a contract for $86 million.” Murray recalled. “So he’s always been good to me, he’s always been supportive of me. And it was a lot of fun for me to get to watch him throughout his career.”

Murray said if you want to refer to him as the Larry Johnson of rodeo, he also would consider that an honor.

“He was definitely a freak of nature,” the humble Texas cowboy said. “I think the thing he and I had in common was our love for the game. If you look at the champions in the different sports, there’s different ways to go at it, different attitudes and preparations. But the love of the game is a constant.”

— If there were rafters for honoring the sports facilities themselves, the former home of the Raiders and still home (for now) of baseball’s Oakland Athletics would not be among the feted.

RingCentral Coliseum recently was named the dirtiest arena in pro sports based on a Betsperts.com fan vote. The dilapidated domicile formerly known as the Oakland Coliseum was named on 4.2 percent of the dirty reviews, topping the Washington Commanders’ FedEx Field (3.2) and the Philadelphia 76ers’ Wells Fargo Center on the unkempt list.

— I once wrote a column praising former UNLV football coach Bobby Hauck for skipping out on a rare winning press conference so he could watch his son play youth football.

Robby Hauck is all grown up now. Playing for his father at Montana, the safety set the Big Sky record for career tackles in the same game he returned a missed field goal for a 99-yard touchdown.

— Musiette McKinney, a coordinator for UNLV’s Upward Bound college preparatory program, was featured in a two-part San Francisco Chronicle story this week about the short-lived San Francisco Pioneers of the Women’s Professional Basketball League, which preceded the WNBA by 16 years.

“I just remember packing up, getting in my car, my family crying,” McKinney, a former star at Cal Poly Pomona, told the Chronicle’s Scott Ostler as speculation increases that the Bay Area may land a WNBA expansion franchise. “I remember thinking, ‘What is about to happen here?’ ”

One of the first women’s pro sports teams, the San Francisco Pioneers were playing legit basketball in a tough league. Despite the WBL’s quick demise in 1981, the women left an indelible mark.https://t.co/PDDbsweR5B

Rodeo champion Ty Murray, on having his name retired to the rafters during a ceremony at the Thomas & Mack Center during the National Finals Rodeo:

“You have your Halls of Fame, but when you see a guy whose name and number is retired in the rafters, that dude was special. He brought something to the game you may never see again.”