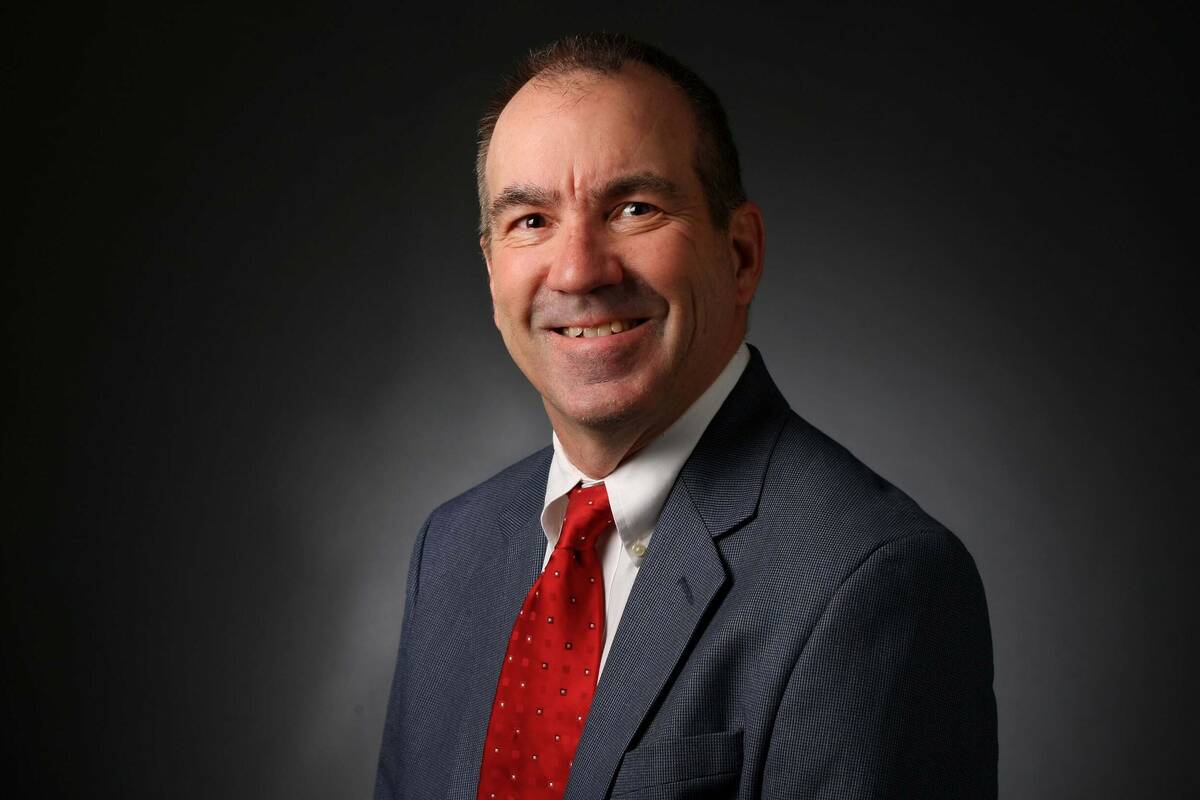 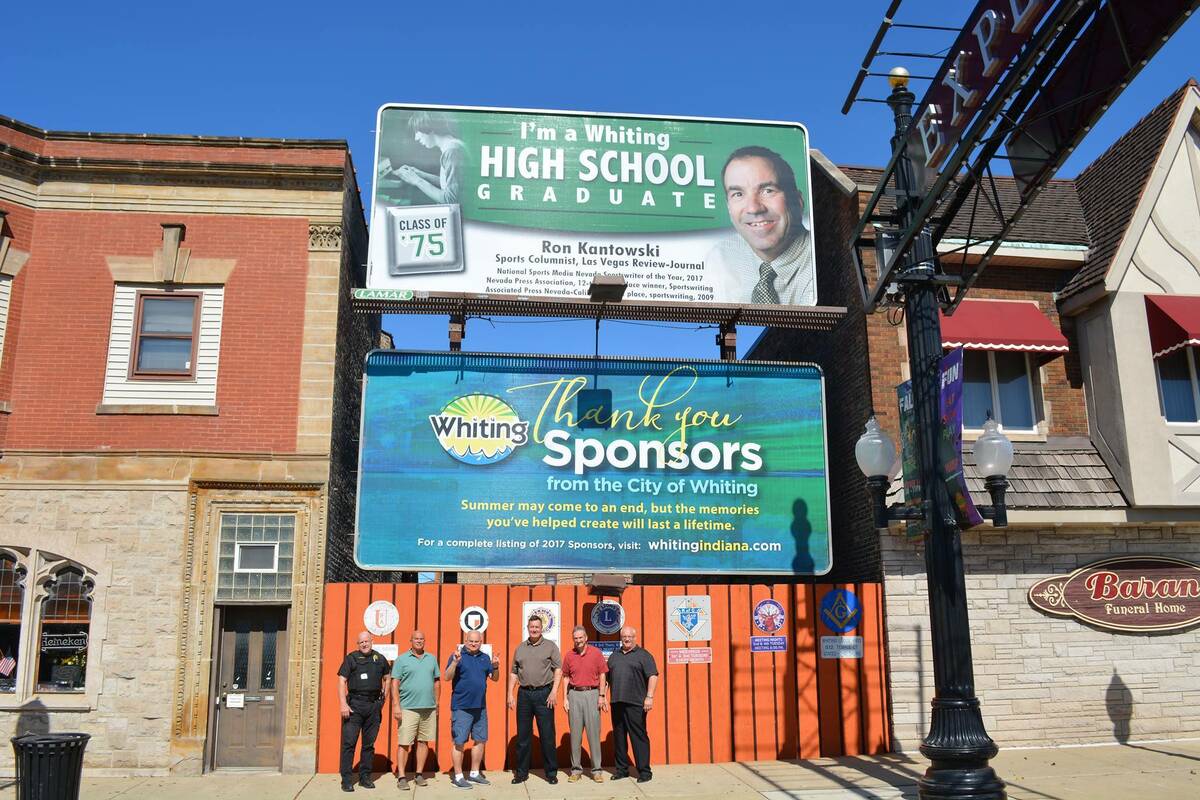 High school friends and former baseball teammates of Ron Kantowski are pictured in front of a billboard in his hometown of Whiting, Indiana, honoring the RJ sports writer's long newspaper career in Las Vegas. (City of Whiting, Ind.) 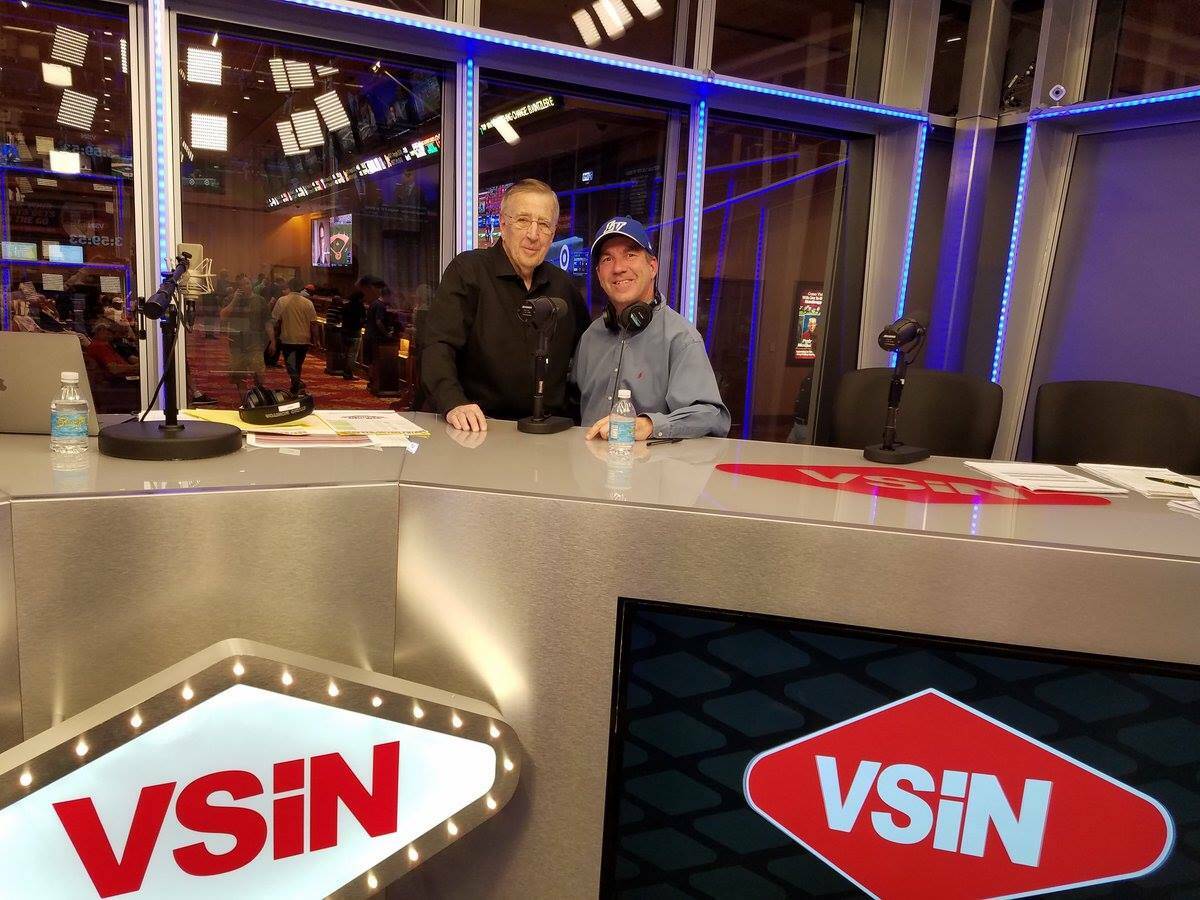 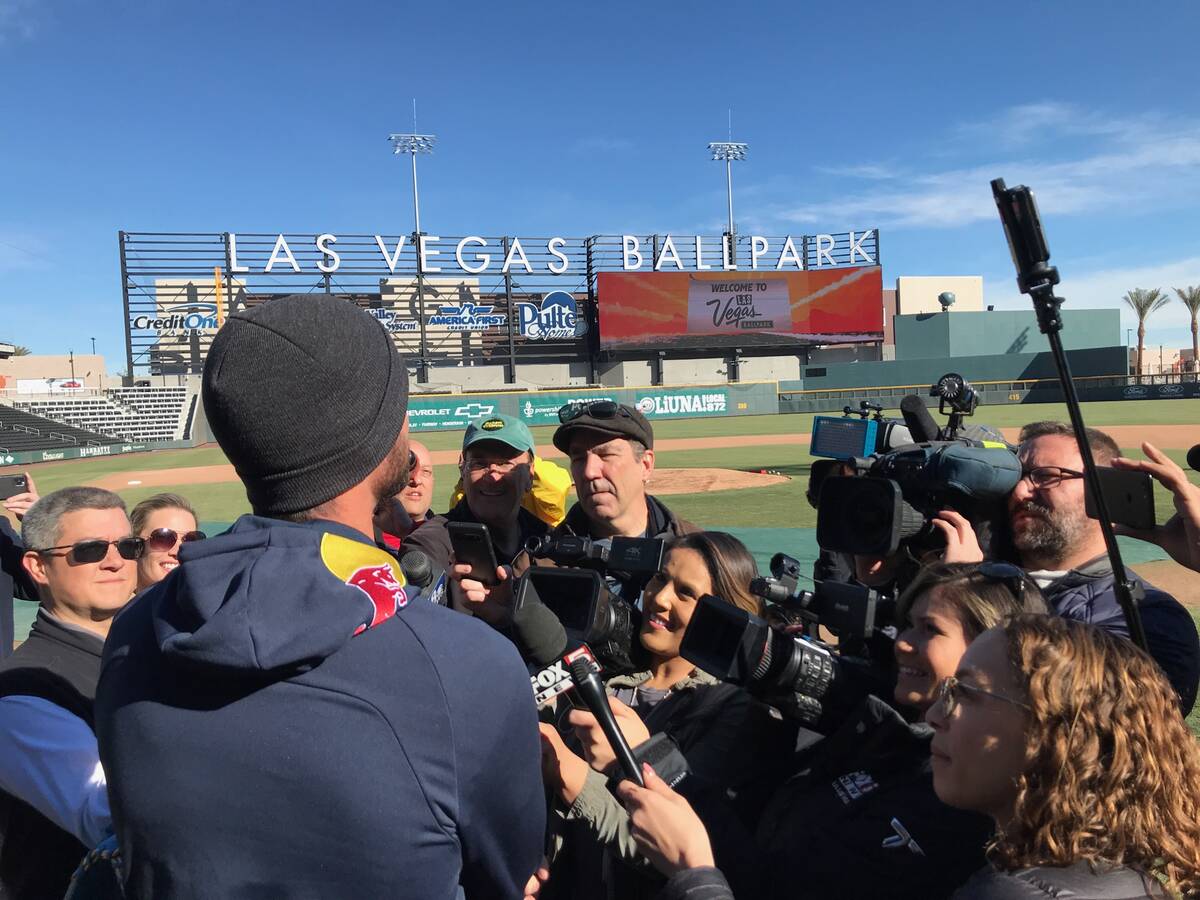 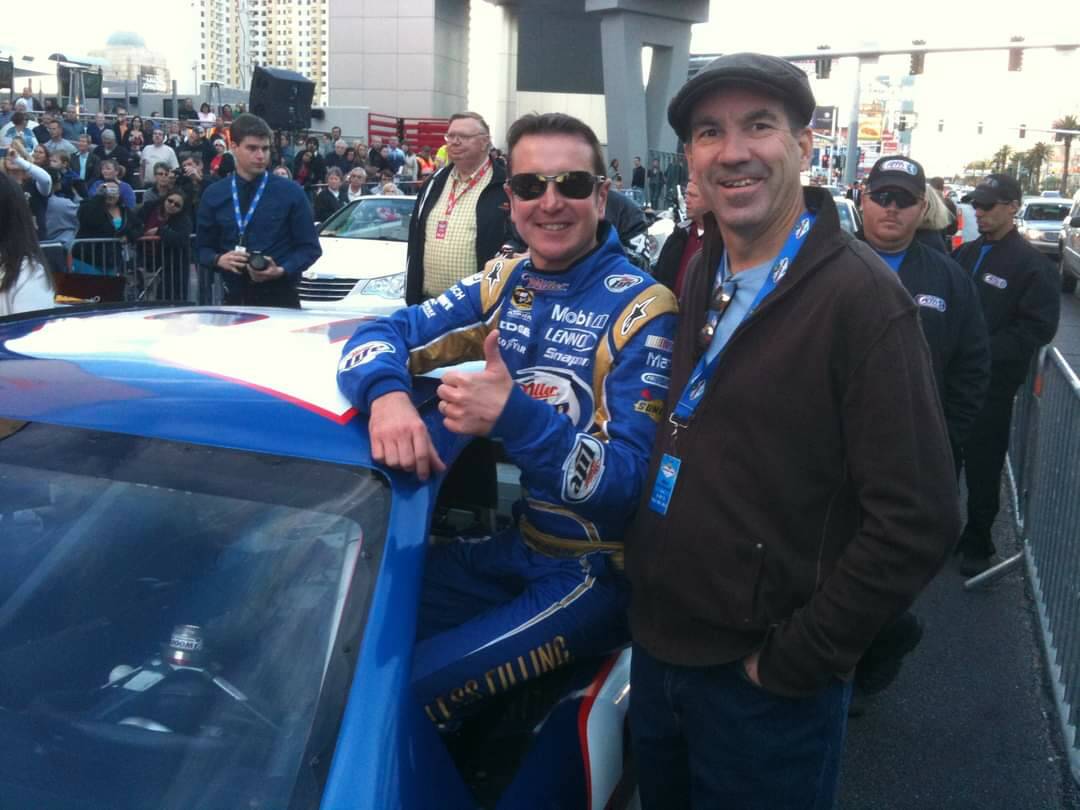 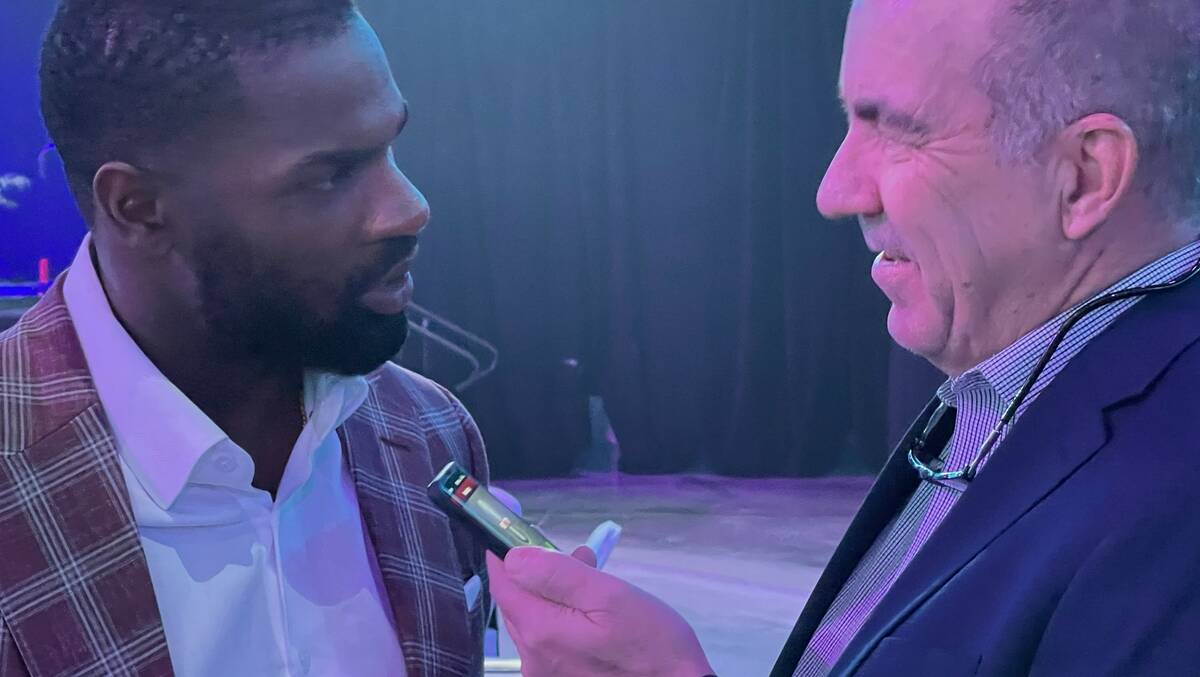 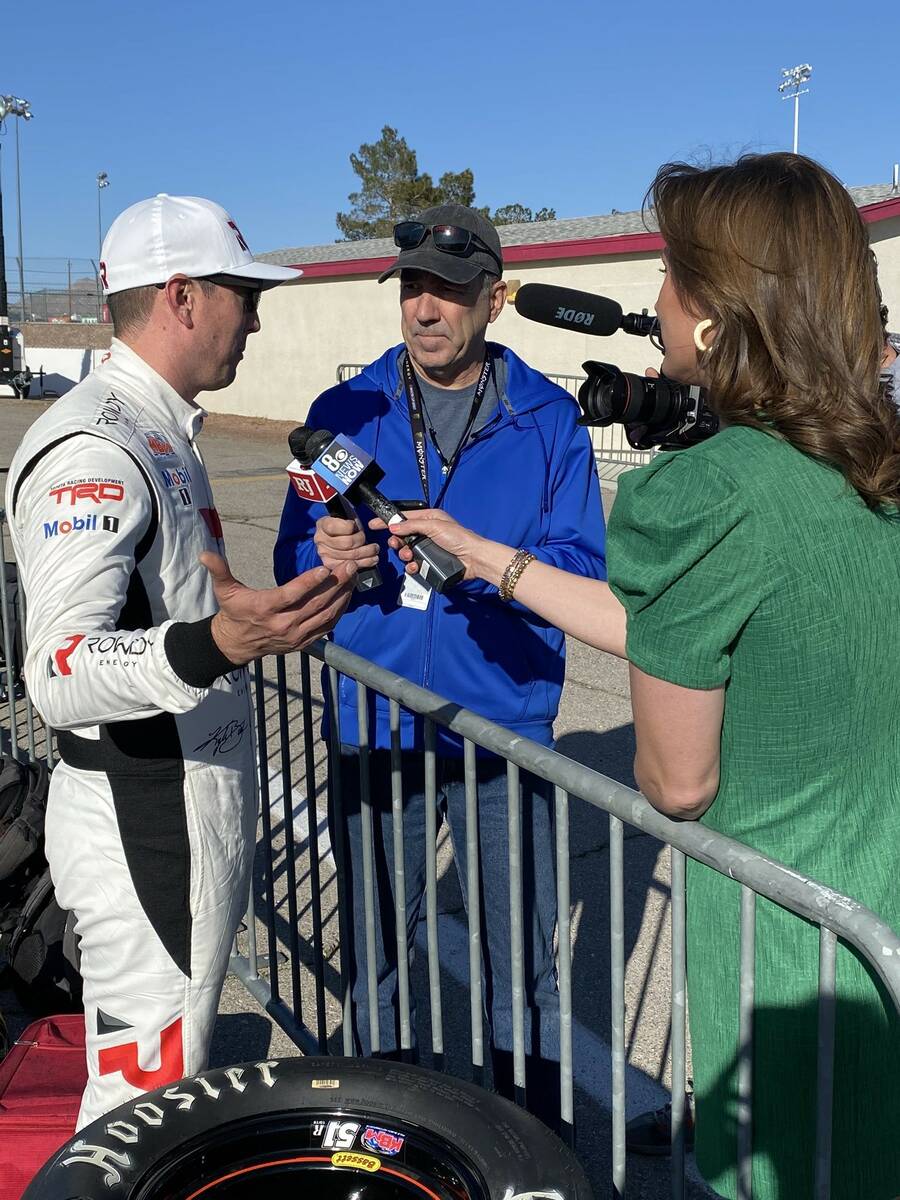 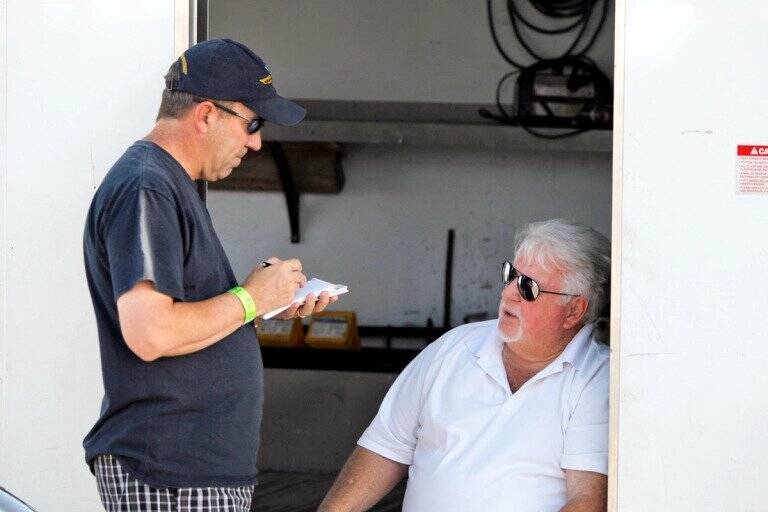 The date was Oct. 17, 1987. Vijay Amritraj was playing tennis in a satellite tour event at Spanish Trail. It was my first assignment as a Las Vegas sports writer.

Amritraj had been a quarterfinalist at Wimbledon, where he lost to Jimmy Connors. But by 1987, he was well past his prime and transitioning to an acting career. He had played an intelligence operative in “Octopussy,” a 1983 movie starring Roger Moore as James Bond.

There’s an old proverb about those who tell stories rule the world. I had set the bar a little lower. I figured a story about a former tennis ace going Hollywood, rather than one about his serve and volley, might get me off to good start in the new job.

At least that was the plan before Amritraj suffered an injury before I could ask about sharing a few scenes with 007.

He defaulted to some kid I had never heard of. His name was Michael Chang, and he was only 15 years old. Two years later, he would become the youngest to win a Grand Slam event by defeating Stefan Edberg at the French Open.

But how was I to know?

So I wrote about his serve and volley.

So long and thank you

That was my first byline in Las Vegas. And this will be my last.

After 35 years of writing about sports in Las Vegas, I am retiring.

You might occasionally see my name when NASCAR or the National Finals Rodeo is in town as an RJ special correspondent. Or when the former colleague who gets stuck covering the UNLV football team calls in sick. But other than that, cue the Von Trapp family: So long, farewell, auf Wiedersehen, adieu.

It goes without saying that I would like to thank my editors, colleagues and readers. But I’m saying it anyway. I never wound up ruling the world, but I got to tell a lot of stories.

When I started writing about sports in Las Vegas, parking on the Strip was free, UNLV was No. 1 (or close to it) in basketball, fullbacks ran with the football, Marc-Andre Fleury was 3 years old, and America Online was on its way to becoming the next big thing.

Where once there were 57 channels, there now are hundreds. Everything’s on, but nothing’s on. Especially during baseball season, when your team is playing on the West Coast and the blackout is in effect.

These days when somebody spans the globe for the constant variety of sport, a la ABC’s “Wide World of Sports,” it’s usually to check the point spread or the transfer portal or to see how far a frustrated Tom Brady can toss his helmet.

But as Madonna sang in the movies, don’t cry for me, Argentina. I had a longer run than Frank Shorter. The world is changing, and not everybody will get to finish the marathon.

The other day I saw a guy in the median holding a cardboard box top. It said he was a former travel agent who would book a flight, hotel and rental car for food.

Progress is impossible without change. Time waits for no one.

My arrival in Las Vegas was less than auspicious.

The first time I set foot in the sports department at the old Las Vegas Sun building, it got stuck. It appeared that somebody had changed their oil on the carpet.

What had I gotten myself into?

My first beat was covering UNLV football — which probably explains why I started writing stories about guys who jump over barrels on ice skates. With the Rebels having achieved only four winning seasons in my 35 years on the job, writing about people in the margins of sport proved to be a wise decision.

Instead of college football, I wrote about electric football — the tedious kids’ game mostly known for the triple-threat quarterback who propelled spring-loaded felt footballs into the living room shag carpet, never to be seen again.

I wrote about a guy who held a bow with his foot and shot arrows with his toes. A rodeo bull rider with a prosthetic ear. A boxer possessing Hands of Stone. A chance meeting with Roberto Duran spawned a stream of consciousness about swimming in the Panama Canal that evolved into a dissertation about how the locks in the canal work.

But how can you not write about an experience like that?

I wrote about Paul Thorn, a singer-songwriter from Mississippi who once fought Duran, was knocked out in the fifth round and composed a song about it.

What goes around, often comes around in Las Vegas. At least until it gets knocked on its keister.

I wrote about Robert Goulet calling the sports department to inquire about the numbers in parentheses following the tennis scores on the scoreboard page.

I wrote about Evel Knievel calling the sports department to ask if the Colts won on “Monday Night Football” because he bet Indy and laid the points and his America Online connection wasn’t working.

One day, one of the Hudson Brothers from the short-lived singing group — I think it might have been Brett — called the sports department for what seemed like no reason at all. I didn’t write about it, but the thought crossed my mind.

Leave Las Vegas? Who besides Nicolas Cage in the movies would even think about it.

But contrary to what you might have read on a slow Tuesday and other days of the week, not all of my stories were about those trying to reinvent themselves in the neon desert. Some were even about legends whose statistics you didn’t have to look up.

— I drank a beer with Gordie Howe. It was his idea. He was in a suite at the old Las Vegas Hilton, waiting to catch a red-eye back to Detroit or wherever he was headed next.

Mr. Hockey talked about how the game had changed. That when he played, you could turn out the lights in the building, and you still would know whose line was on the ice from the sound it made.

Then he popped the tops on two more cans of Miller Lite. Also his idea.

— I went for a ride with Mario Andretti. It was in the back of a two-seat Indianapolis-style race car at Las Vegas Motor Speedway.

We did eight laps (admittedly, Mario did most of the heavy lifting). Somebody with a stopwatch said we went 193 mph.

I said I would have to take their word for it. I had closed my eyes when Super Mario mashed the gas and the retaining wall in Turn 4 grew larger than any object I had ever seen in a side-view mirror.

— I went one-on-one with Michael Jordan. It was during his charity golf tournament at exclusive Shadow Creek.

Director’s chairs were set up on the edge of the practice green — one for MJ, the other for the guy who was friends with his charity event’s PR person. People lined up three-deep to hear me ask silly questions, which the basketball deity answered with great diplomacy.

I remember thinking this is how Cleveland’s Craig Ehlo must have felt with time running out in Game 5 of the 1989 playoffs and the Bulls trailing by one.

Just part of the job, you say with feigned nonchalance to the folks back home, which reminds me of a photo I received a few years ago.

It was from some old buddies who I had not seen in decades. They were standing under a billboard in our little hometown on the industrial southern shore of Lake Michigan. The billboard had my picture on it — one in a series of homages to graduates of our little high school who had outkicked their coverage, as often is said about those who overachieve.

If you look closely, you might notice the billboard is tucked between a bar and a funeral parlor. Guys back home refer to this little slice of main street as the ultimate final resting place.

But as I say farewell or at least see you later, I’m hoping that will remain another story for another time.

Ron Kantowski is a former Review-Journal sports writer. You can reach him at ronkantowski@gmail.com.