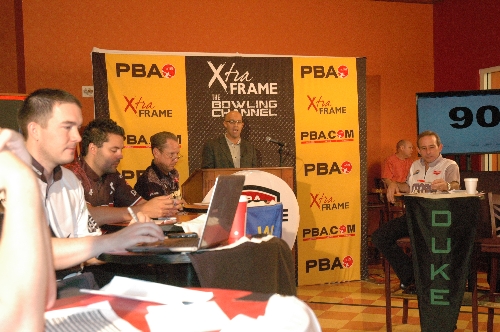 In retrospect, I’m glad the Mayans were wrong about that prophecy of doom thing, because now Billie Jean King and the New York City WTT KingPins will be held accountable for using their fifth-round pick in the inaugural Professional Bowlers Association League draft on John Szczerbinski.

If Szczerbinski comes up short – say he fails to cover a 10-pin against the Silver Lake Atom Splitters in the ninth frame, or the ESPN announcers pull a muscle pronouncing his name – it could be the bowling corollary to RG3’s knee.

Well, maybe not RG3’s knee. Maybe more like the blister on PB3’s (Parker Bohn III) finger. But I almost can hear Michael Wilbon and Tony Kornheiser debating whether the KingPins should have taken Szczerbinski when several Scandinavia bowlers with umlauts and fewer syllables in their names still were on the board.

(One day during the NASCAR season – which now runs for like 11½ months, because they already are testing at Daytona, and it’s on TV, and so I am rethinking “Ice Loves Coco” on the E! channel – I heard Wilbon and Kornheiser banging on about Dale Earnhardt Jr.’s losing streak. I think it’s in their contract they occasionally must engage in fake arguments about sports they care nothing about, so long as ESPN carries them.)

ESPN will televise five weeks of PBA League competition beginning Jan. 27, at the conclusion of the nine-day PBA Detroit Winter Swing, plus the PBAL Elias Cup finals from Indianapolis, to be shown in April. The Elias Cup is the PBAL Super Bowl, so there’s a chance Kenny Loggins or Herb Alpert & the Tijuana Brass might perform.

Some people might think formation of a pro bowling league is a sign the Mayans’ prophecy of doom thing is back in play. Not me, because team competition is the essence of sports, and if golf is a sport, and eating hot dogs is a sport, then bowling is a sport.

Plus, you know what it says on those placards in the locker room: “No heels allowed on gym floor.”

But on another placard, it says “There’s no ‘I’ in TEAM.”

Yes, there are three I’s in the Professional Bowlers Association League. But they are small I’s. You hardly notice them.

Only in this case, Billie Jean King owns the towing business.

The tennis legend said the PBAL reminds her of World Team Tennis, which, unlike the “Battle of the Sexes,” was her idea.

(Playing Bobby Riggs on TV mostly was his idea, because back then, Billie Jean did not need the money, or the notoriety. This still was years before Michael Jackson insisted the other Billie Jean was not his lover.)

“I am a big believer in the team concept,” the original Billie Jean said in a statement. “This is definitely not your typical bowling league. It’s new, it’s groundbreaking and it is definitely going to be competitive.”

Plus, they let her put WTT in the KingPins’ logo.

The celebrity owners do not pay a franchise fee. If they attract new sponsors – the idea behind pro team bowling – they will receive a percentage of that money.

Each player on the championship team will receive $15,000; there also are player salaries, ranging from $10,000 for a franchise bowler (Pete Weber, Norm Duke, Mike Fagan) to $2,000 for a fifth-round pick such as John Szczerbinski or Henderson’s Dave Wodka, who will roll for L.A. X.

The PBAL draft was in Las Vegas, at the South Point, in November. There is no truth to the rumor that when franchise bowler Bill O’Neill of the Philadelphia Hitmen selected Mika Koivuniemi of Finland, a guy wearing a Donovan McNabb jersey booed without mercy, hoping he’d pick Ricky Williams instead.

The PBAL, in the manner of a lot of startup leagues, has a Birmingham Stallions/USFL vibe to it: Though play begins this week, an eighth team, comprised of Sean Rash, Ryan Ciminelli, Ryan Shafer, Walter Ray Williams Jr., Jason Sterner and supplemental pick Tom Hess (for it cannot be an official draft without supplemental picks) does not yet have an owner or a name.

“Huge Racks” has been claimed, no doubt by a team of billiards enthusiasts from Des Moines. “Big Lebowskis” still is available.

When I asked Jerry Schneider, the affable publicity man at PBA quarters, if Jeff Bridges or the Coen brothers were to call about becoming the eighth celebrity owners, he said the PBA probably could make that happen.