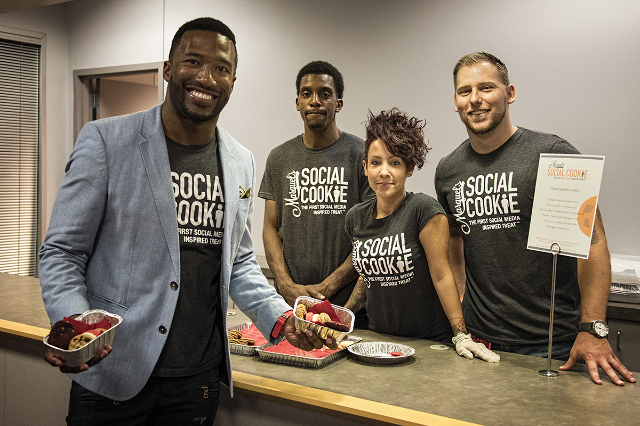 Marquel Martin went from playing college football, to becoming a reality TV star (for five weeks) on ABC’s “The Bachelorette,” to baking cookies for the media and freeloaders from the hospitality suites during halftime of Saturday night’s UCLA-UNLV game at Sam Boyd Stadium.

This is an interesting career arc, but not one you could envision for somebody like, say, Ndamukong Suh.

Before he tried to romance a 26-year-old assistant district attorney from Atlanta named Andi Dorfman on national TV — he got booted off the island, or whatever, after five weeks — and became a suave and debonair Cookie Monster, Marquel Jayloni Martin of Rialto, Calif., made the UNLV football team as a walk-on defensive back.

He wore jersey No. 13 and mostly covered kicks for Mike Sanford. He was on the field, or at least the sidelines, when Sanford and his football sons upset No. 13 Arizona State in 2008.

His mouthpiece must have fit well because he still has a perfect smile. Pearly whites from here to Tempe.

It appeared the media and the freeloaders from the suites literally were in for a treat at halftime.

Martin’s fledgling cookie business is called Marquel’s Social Cookie. He calls his confections “The First Social Media Inspired Treat” on business cards roughly the same size as UNLV’s defensive front. The business cards are tiny, which is how the Rebels appeared against UCLA.

For now, you can only taste Marquel’s cookies through social media. If you’re hungry, friend him on Facebook or follow him on Twitter. He has three employees — one is Beau Orth, a former teammate who intercepted a pass against ASU — and a commissary kitchen near Sunset Park. He has been in business about six months.

The next step is calling for a fake field goal — er, getting set up online.

“And then the ultimate vision is to have a brick-and-mortar shop in downtown Las Vegas,” Martin said. “I essentially want to have a gourmet cookie lounge with cookies, wine, milk, coffee and tea.

“How does that sound?”

It sounds positively decadent, Marquel. Way better than scraping crumbs out of a rumpled bag of Chips Ahoy after discovering your roommate had scarfed down the last slice of cold pizza while you were sleeping.

When asked about the pressure of baking cookies for the media and the freeloaders from the suites, he said it was less stressful than playing football before a large crowd, or being on national TV, trying to vie for a young woman’s love and/or attention.

Based on the crumbs on the napkins of the media after the marching bands took the field, and the way the sports reporters were rubbing their collective tummies, I’d say Andi Dorfman made a huge mistake by choosing that rube Josh Murray instead of Martin.

Murray proposed during the season finale. He and Dorfman broke up about six months later.

Had the bachelorette selected Martin, she still could been feasting on gooey, homemade, classic chocolate chip cookies with a glass of warm milk. She might not be able to fit into her little black dress, though.

“That’s what started the idea,’ he said. “When I was on the show, for my first impression with Andi, I did a cookie tasting. I do cookies and wine every Sunday. That’s just my thing. The next thing you know, my fans started calling me Cookie Monster.

“It kind of organically (grew). I always wanted to start a gourmet cookie line when I retire (Martin also has a marketing job with the UFC) but I thought let me jump after it now. I love to do this; it’s a passion.”

Down on the field, the Rebels and Bruins were knocking helmets and signaling for fair catches. It brought back pleasant memories for the 28-year-old former special teams standout, and at least four bad ones.

“I had four surgeries when I was here,” Martin said. “You can’t get hurt doin’ cookies.”

I told him I’d be back at halftime for one (or two) of those classic chocolate chips. By the time I arrived, they were gone. So were the maple bacon, and the rest of Marquel’s Social Cookies.

I’m blaming it on those ravenous freeloaders from the hospitality suites.

When last spotted, Marquel Martin was headed toward the press box elevator with empty baking pans. He was rocking a natty, light blue linen jacket with an olive pocket square over his black cookie-making T-shirt.

I’d like to see Ndamukong Suh pull that off.