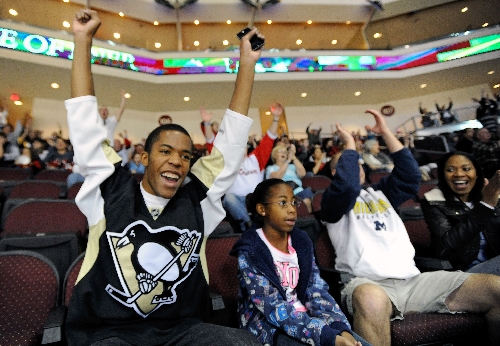 The only local sporting event contested at a special matinee time to celebrate the Martin Luther King holiday Monday was a hockey game at Orleans Arena bereft of African-American players.

Near as I could tell through those Plexiglas face shields, there weren’t any African-Canadian players killing penalties or skating on the checking lines during the Wranglers’ compulsory program against the Colorado Eagles, either.

Had this been Cinco de Mayo, one can assume there would have been a Julio Cesar Chavez Jr. fight at the MGM Grand or Mandalay Bay, and afterward, a concert featuring the Mexican Barbra Streisand or the Mexican Britney Spears or the Mexican Beyonce or, at the very least, a Los Lobos tribute band.

But as Butch Goring, the former NHL star and old Las Vegas Thunder coach was fond of saying, full marks to the Wranglers for trying. It would have been nice to see more than a couple of dozen African-American faces in the 2 p.m. crowd, because if ever there was a game warranting 2-for-1 tickets to introduce an old sport to a new audience, this might have been it.

Ondre Wills, a 17-year-old football player at Shadow Ridge High School, was seated midway up Section 106 with his little sister, Destiny, his mother, Cheri, and his mother’s boyfriend, Tommy Savola, who hails from Painesdale, an unincorporated community in the Upper Peninsula of Michigan on the shores of Lake Superior, meaning he’s just about thawed out by now.

I asked young Ondre, who was wearing a Pittsburgh Penguins jersey, when he became a hockey fan.

“When I came to my first Wranglers game, Wranglers vs. Stockton Thunder in ’07,” he said.

Wills was about to tell me who got the assists on the first Las Vegas goal that night when I asked him what Dr. King might have made of all this, of this minor league hockey game being played on a holiday named in his honor.

“I think he would have been pretty happy to see everybody bonding,” young Ondre said.

Being the nonviolent sort, Dr. King probably wouldn’t have approved of the fisticuffs between the Wranglers’ Adam Huxley and Colorado’s Liam Huculak near the end of the first period.

At the end of this day, it was still daylight. The early starting time also gave the players a jump-start on a much more widespread and time-honored hockey tradition, that of having a postgame beer or beers.

But as I said, full marks to the Wranglers for at least recognizing the world in which we live.

I would bet that Willie O’Ree thinks Monday’s special matinee was a good idea, too.

Wednesday will mark the 54th anniversary of O’Ree becoming the first black player to skate in the NHL. It happened on Jan. 18, 1958, after O’Ree was called up from the Quebec Aces to skate a few shifts for the Boston Bruins against the Montreal Canadiens.

Stories written about O’Ree, now 76, said he once was hidden in a closet to protect him from intolerant fans in Chicago.

Surely Dr. King wasn’t thinking about hockey, at least not specifically, when he wrote his “I Have a Dream” speech in 1963. But as for the part of the nation rising up to live out the creed of all men being creating equal, consider this: On Jan. 7, Jarome Arthur-Leigh Adekunle Tig Junior Elvis Iginla of the Calgary Flames, born in Alberta, Canada, to a Christian father from Nigeria and a Buddhist mother from Oregon, flipped the puck from the right faceoff circle off a skate and past Niklas Backstrom into the Minnesota Wild net.

This was his 500th NHL goal. This made Iginla the first black player, and just the 42nd player of any hue, to achieve the milestone.

Iginla is the Flames’ captain, and he is headed for the Hall of Fame.

So despite the occasional racial slur uttered in the heat of battle, progress has been made.

When the Flames travel to Chicago, Jarome Iginla’s teammates do not have to hide him in a closet. He sleeps in a suite in a five-star hotel on Michigan Avenue where fine chocolates are placed on pillows.