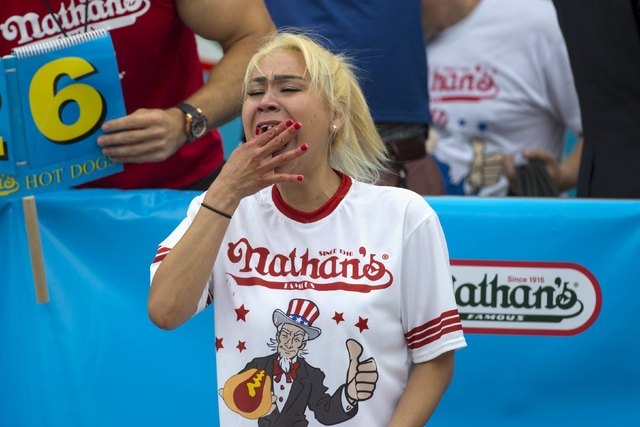 A couple of years ago I had the pleasure of chatting with Dick Fosbury, who won the gold medal in the high jump at the 1968 Mexico City Olympics by going over the bar backward. They called his style the “Fosbury Flop,” and it revolutionized the high jump.

People who like to eat a lot of hot dogs in one sitting are starting to say that about Las Vegan Miki Sudo.

Sudo, 29, won her second consecutive Nathan’s Famous Fourth of July International Hot Dog Eating Contest in the women’s division by scarfing down 38 frankfurters in 10 minutes by first removing the hot dog from the bun and eating it, then dipping the bun in Crystal Light and eating it.

Dick Fosbury and Ms. Pac Man would have been impressed by her innovative approach.

“Others have done the same thing; I just sort of copied it,” she said during a telephone conversation after returning to Las Vegas with the hot dog championship belt, a Nathan’s Famous swag bag and indigestion.

Sudo, who said she has a marketing job here and wanted to leave it at that, also brought home a check for $10,000 — the same amount 23-year-old Californian Matt Stonie received for dethroning eight-time reigning weiner dog kingpin Joey “Jaws” Chestnut, the Babe Ruth of competitive eating, in the men’s division.

(Note to soccer’s FIFA: This is how you do it. You pay the women the same as the men, and you don’t make them play on fieldturf, and the length of their shorts doesn’t matter.)

Sudo said the reason she eats dog and bun separately is that Nathan’s Famous hot dogs are “super savory.” The sweetness of the Crystal Light — strawberry orange banana, the same flavor you can buy off the shelf at Albertsons or whatever they’re now calling it — balances out the savoriness or the savorocity or whatever.

Anyway, to regurgitate what she said, it makes the hot dogs easier to digest. The artificial sweetener serves as lubricating additive — it’s like STP for your esophagus and transverse colon.

In 2013, she also wolfed down and kept down 7.5 pounds of deep-fried San Joaquin Valley asparagus in Stockton, Calif., which seems much more impressive than eating chocolate bars with a snake necklace. Which I’m pretty sure Alice Cooper still could do.

With a small Coke to wash it all down.

Her Facebook page said she’s ranked No. 4 by Major League Eating. Chestnut still is No. 1, because Chestnut is Chestnut. He’s followed by former ballplayers John Kruk at No. 2 and Terry “Fat Tub of Goo” Forster at No. 3.

Unlike most competitive eaters and/or relief pitchers, Sudo does not have a colorful nickname, though she is said to possess a “naturally efficient metabolism.”

Good thing, because one of the reports out of Coney Island said men’s champion Stonie swallowed 17,360 calories, 1,116 grams of fat and 48,360 milligrams of sodium in those 62 weiners it took to dethrone Jaws Chestnut, who threw down 60 into his digestive tract before settling for silver and a toothpick. (Chestnut’s record is 69 for those belching at home.)

After he lost, Chestnut vowed he’d return to reclaim his title. He said with a sort of straight face that defeat had made him hungry again.

According to her Major League Eating bio, an onlooker once referred to Miki Sudo as a “pure eater.” When somebody asked what that meant, the onlooker said he didn’t know, “only that when you see it, you see it. And I saw it.”

This is sort of remindful of when Howard Cosell referred to Muhammad Ali as “truculent,” and the champ replied, “Whatever truculent means, if it’s good, I’m that.”

It is also remindful that you don’t ask Miki Sudo if she wants fries with that. You just give them to her.

Sudo also has been described as “Chestnut-like.” The highest honor. She’s all that and a bottle of Pepto-Bismol and a roll of Tums.

She said she likes hot dogs away from the contest tray (and pizza and sushi), and she likes baseball. But when she goes to ballgames, she usually has only “four or five” hot dogs. Unless it goes extra innings. No need to show off during batting practice.

Normally, Miki Sudo weighs 120 pounds. She’s an itty-bitty thing. But when we spoke Tuesday, she said she weighed around 135, and that unlike Jaws Chestnut, she wasn’t feeling hungry again. She said she still felt pretty full.