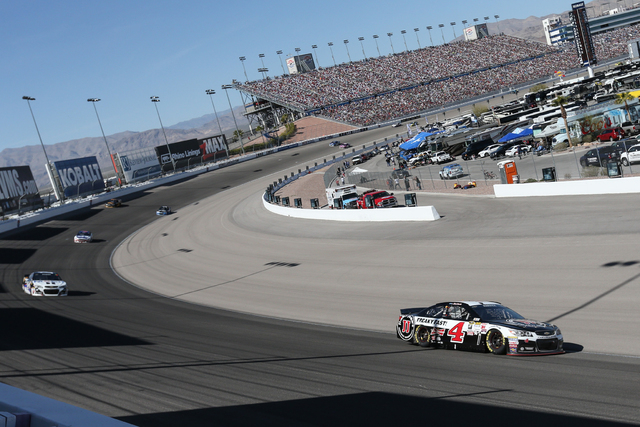 “Catch us if you can, mmm-mmm.

Those are the lyrics to “Catch Us If You Can,” an old song by Rock ‘n’ Roll Hall of Famers the Dave Clark Five. It wasn’t written about NASCAR Weekend at Las Vegas Motor Speedway. It could have been.

The annual speedfest is nearly here.

You can almost smell the high octane, the burning rubber, the barbecue on the grill, the suntan lotion. You can almost see the questionable yellow flag that bunches up the field toward the end of the race.

The weather is supposed to be ideal.

To borrow one of the TV catchphrases, this will be the third time in 2016 the NASCAR guys and Danica Patrick will crank it up. Denny Hamlin won the season-opening Daytona 500 with a thrilling last-lap pass. Jimmie Johnson won Sunday’s race at Atlanta. Popular Dale Earnhardt Jr. finished second.

Kevin Harvick finished sixth. He led a race-high 131 laps. Harvick was leading and seemed to be pulling away to a comfortable victory until Johnson used pit strategy during the last fuel window to take control.

Will the native Californians be the men to beat in the Kobalt 400? There’s a pretty good chance of it. Johnson, the six-time series champ, has won a record four times in Las Vegas, including three in a row from 2005 to 2007. Harvick, the 2014 Sprint Cup champion, won here going away last year.

Johnson’s victory in Atlanta was the 76th of his career, tying him with the legendary Dale Earnhardt for sixth on the all-time list.

Can Johnson surpass the man with the mustache here on Sunday?

Will new low downforce rules make the cars more difficult to drive and/or improve the quality of racing? The cars were slip-sliding around the track at Atlanta, which, like Las Vegas, is a 1.5-mile oval. The drivers seemed to love it at first blush.

How many cars will attempt to qualify? Only 39 — the fewest in two decades — were on hand at Atlanta. It was just the third time since 1998 that NASCAR raced without a full field.

How will reigning Sprint Cup series champion Kyle Busch do? How about big brother Kurt?

Both Las Vegas lead foots missed last year’s Kobalt 400. Kyle was injured; Kurt was suspended. Both were racy at Atlanta — Kyle finished third (he also ran third at Daytona); Kurt was right behind in fourth. Kurt started from pole position after Kyle’s car was sent to the back of the field for a rules infraction.

The brothers are looking good so far. But only Kyle has won his hometown race. Kyle won from the pole position in 2009; Kurt’s best finish in 14 starts is third, in 2005.

These are some of the storylines for the first installment of “NASCAR Goes West,” which is what the sanctioning body is calling the next three stops on the schedule: Las Vegas, Phoenix and Fontana, California.

Like the song says, time to get a move on. Time to yell with all of your might.

Time to load up the cooler with ice and cold beer; time to take the infield escalator to the Neon Garage.

— Las Vegas Review-Journal sports columnist Ron Kantowski can be reached at rkantowski@reviewjournal.com or 702-383-0352. Follow him on Twitter: @ronkantowski