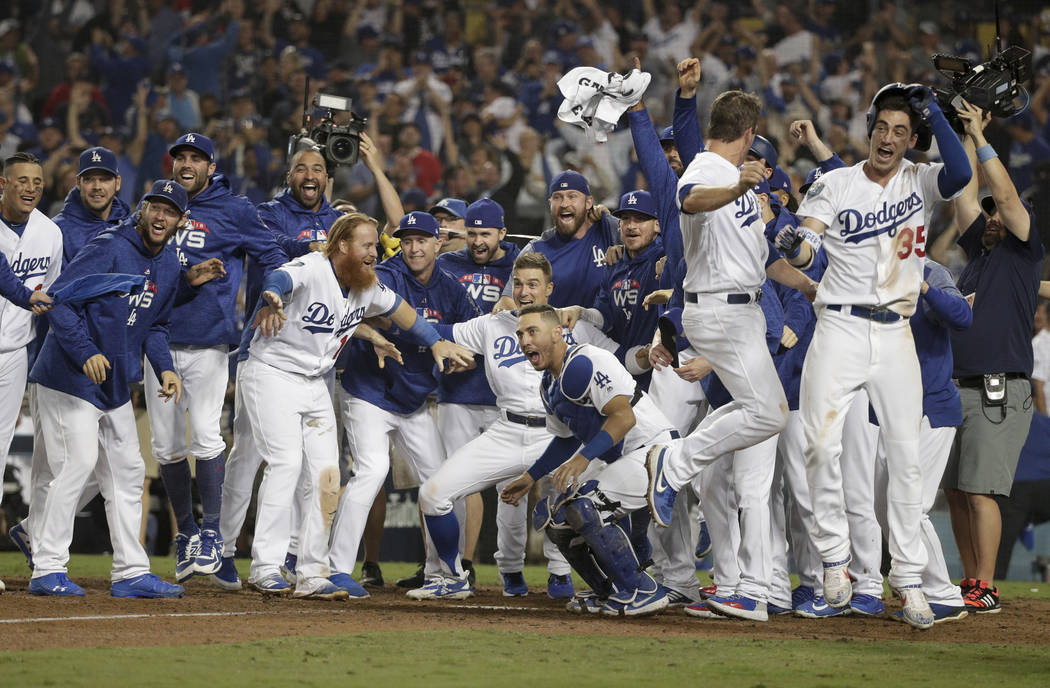 The Los Angeles Dodgers celebrates after Max Muncy's walk off during the 18th inning in Game 3 of the World Series baseball game against the Boston Red Sox on Saturday, Oct. 27, 2018, in Los Angeles. The Dodgers won 3-2. (AP Photo/Jae C. Hong)

With baseball’s winter meetings in town last week, it seemed the right time to ask about territorial rights and crazy TV blackouts.

Which proved to be as difficult as hitting a knuckleball. Or catching one.

A sign in the Mandalay Bay convention area said this way to the MLB office. Nobody there was qualified to speak about the blackout policy, but they took your card. Somebody probably will call, I was told.

Nobody did. Same thing on Tuesday. And Wednesday. By Thursday, the security guard said I wasn’t allowed down there anymore.

One might surmise that territorial rights and crazy blackout policies are a sore subject for MLB.

A Google search revealed dozens of stories saying MLB’s territorial rights and blackout policies were the worst thing since the designated hitter and walk-up music.

Only one said they aren’t such a bad idea.

It was written by a man named William Juliano for “The Captain’s Blog,” which offers “A Look Inside the Yankee Universe.” You knew that were somebody to offer a contrarian view of MLB territorial rights and crazy blackout policies, it probably would be a Yankees fan.

“The blackout is one of the best things to happen to baseball fans in the past 20 years,” the story begins.

(I would argue that it was nachos served in plastic batting helmets.)

Now, if you live in Southern Nevada, cut your cord and purchased one of the baseball TV packages, you may not agree that not being able to watch Dodgers, Angels, Padres, Giants, A’s and Diamondbacks games from the comfort of your living room sofa is the best thing since nachos served in a batting helmet. Same for those in Iowa, where one cannot view the Twins, Brewers, White Sox, Cubs, Cardinals and Royals after chores are done.

Those in Cedar Rapids are not pleased, and not just because the whole town smells like oatmeal.

But according to the Yankee Blogger — not to be confused with the Yankee Clipper — territorial rights play an integral part in baseball’s economics and its competitive balance.

If you think defensive shifts and 100-pitch limits are a bane on the game, try removing territorial rights and lifting blackouts, says the Blogger.

William Juliano believes the TV ecosystem is essential to trickle down economics in which ballclubs, regional sports networks, cable and satellite companies and even fans, once math is performed, all benefit.

Here’s how it works: MLB allows teams to sell TV rights in designated markets. The rights are exclusive, which creates value for regional sports networks. The regional networks thus can demand larger fees from cable and dish operators, who then pass the charge on to consumers.

At first blush, it would appear the baseball fan gets the short end of the Louisville Slugger. As usual. But viewers who care not about umpire Laz Diaz’s fluctuating strike zone wind up paying for channels they don’t watch, which helps offset the baseball surcharge.

Like Joe Maddon’s lineup, there are many moving parts to the system: a disclaimer on the blackout policy’s Wikipedia listing says it “may be too technical for most readers to understand.” And sometimes striking a deal that works for everybody is difficult, which is why a couple of seasons into a new TV deal, many Dodgers fans still rely on the Sporting News to find out who won.

But the Yankee Blogger says blackouts are essential. Without them, the regional networks would lose value and go away, forcing MLB to produce games itself to the point where many would not be offered, or the cost to view them would be prohibitive to those not named or related to a Steinbrenner.

As one who pays $112.99 for the MLB.TV package and is prohibited from watching baseball in six markets, I’m still distressed about not being able to view the Padres, at least when they are playing somebody decent. But you still get a lot of live TV baseball for a reasonable price, and three years ago, the Royals won the World Series while playing in a small market.

Could it be these MLB blackouts aren’t as crazy as they seem?

I’m beginning to think so, though baseball fans who live in Boulder City and Cedar Rapids still may want to cup their hands over their ears and ask New York to take another look.