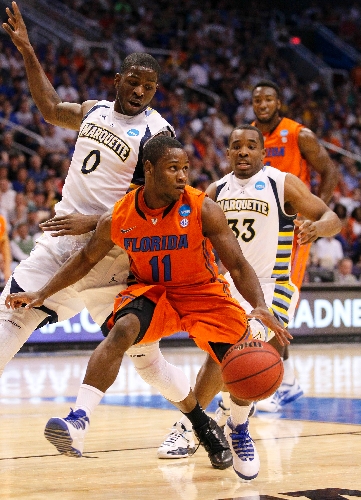 Erving Walker wishes he had been like John Havlicek and stolen the ball.

A 5-foot-8-inch whirling dervish from Brooklyn, N.Y., Walker actually did steal the ball 159 times during his four-year career at Florida, nearly leading the Gators to the Final Four in March.

He stole the taco once.

Guess which steal people want to talk about.

Six days after scoring 12 points in Florida’s 72-68 loss to Louisville in the West Regional final, Walker ordered a $3 sausage taco from a street vendor in Gainesville, Fla., around 1 a.m. Told that this particular Tacos Locos didn’t accept credit cards, he made a run for the border without paying for the taco.

The guy who took the basketball star’s order said he didn’t follow sports, that he wouldn’t know Erving Walker from Junior Walker or Jimmie "J.J." Walker or Walker, Texas Ranger.

He was taken down in a hail of refried beans.

After pleading no contest to grand theft taco, Walker was ordered to pay the street vendor $301.

I know what you’re thinking: Had it been Tuesday between 3 and 11 p.m., and had Walker been in Orlando, where there are two Del Taco locations, instead of Gainesville, where there are none, how many tacos could he have gotten for $301? The answer is 828. That’s a lot of Del Scorcho sauce.

After hitting all five of his field-goal attempts and scoring 12 points in Phoenix’s 99-74 NBA Summer League victory over the New York Knicks on Sunday afternoon at Cox Pavilion, thereby doing nothing to diminish his long-shot chances to stick with the Suns, the soft-spoken dynamo was asked whether "that deal at the end of the season" might follow him around.

"You mean the taco?" he said, smiling sheepishly.

"It was just a silly mistake, playing around with my teammates. Unfortunately for me, it got out of hand. Lesson learned. It was embarrassing. I felt embarrassed for my family, for my university."

People who live in glass houses shouldn’t throw stones, and so I told Walker that I had made more silly mistakes than he had. These have included being arrested for loitering, becoming a Cubs fan and not obtaining legal representation when my first marriage ended in divorce. I would have been much better off stealing a taco and paying the $301 fine.

Plus, because Walker waited until after his senior year to take part in a sophomoric prank, he won’t have to play at Kentucky any more, and thus won’t be bombarded with Chalupa Supremes and Cheesy Gordita Crunches by the fine folks in Lexington.

On Sunday, Walker bombarded the summertime Knicks with medium- and long-range jump shots and also had two rebounds and two assists. It would have been three assists had lumbering center Patrick O’Bryant been able to bend at the waist to receive a nice pass from Walker that had two-hand slam written all over it.

Instead, it went as a turnover.

"I think I did pretty good," said Walker, who left Florida in May with an undergraduate degree and the Gators’ all-time assist record. "The first couple of minutes I had a few jitters but once I settled down I was fine."

Yes he was, said Dan Majerle, the former Suns star who wears the short pants as Phoenix’s summer league coach. "Erving played great. He’s kind of a water bug. He gets out there and runs. He’s hard to guard because he can move and set up some guys and make some 3s. I was impressed."

Afterward, somebody asked Kendall Marshall, the former North Carolina point guard and perhaps heir apparent to Steve Nash in Phoenix, if he knew who Wally Pipp was. Walker received the minutes that would have gone to Marshall had his contract been done.

"This is a big man’s league," Majerle said. "It’s always tough for guys like (Walker). But if you make your teammates better and do what he does, he can probably hook on with somebody."

Walker told me he has been the smallest player on the court since he began playing in the fifth grade, and that if he came up short in the NBA he would probably go overseas or to one of those D-League outposts in one of the Dakotas where the only late-night food option is Denny’s.

My guess is that next time, he picks up the tab.