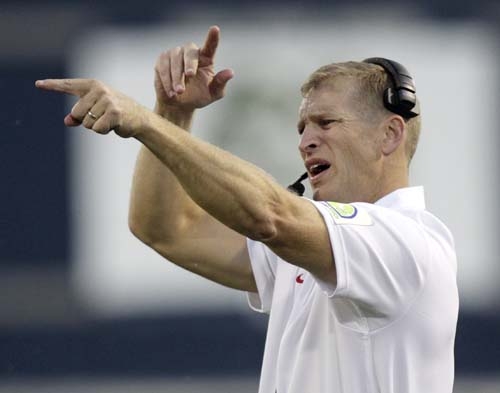 It was the third game in a row the Bulldogs (5-0) scored at least 31 points during a stretch. They used their run against UNLV (1-5) after the Rebels closed to within 27-24 early in the second half.

Louisiana Tech has scored more than 50 points in four games and more than 40 in all five. The Bulldogs finished with 622 yards, and Kenneth Dixon rushed for four touchdowns.

The Rebels next play UNR at noon Saturday at Sam Boyd Stadium.

Kenneth Dixon rushed for touchdowns of 10 and 15 yards, and Louisiana Tech added a field goal to score the final 17 points in the third quarter and take control with a 44-24 lead over UNLV.

The Rebels opened the second half with Nick Sherry’s 46-yard scoring pass to Marcus Sullivan to come within 27-24.

They wasted two other chances, however. UNLV went for a fake field goal near midfield that was stopped, and Sullivan dropped what would’ve been a 69-yard touchdown pass despite not having a defender near him.

UNLV’s Devante Davis caught seven passes for 180 yards and a touchdown in the first half. His yardage total already is the 13th highest in school history for a game.

He caught a 27-yard scoring pass and later a 67-yard pass to set up a field goal to key the Rebels’ late burst.

UNLV could have made the game even closer, if not for a fumble in Louisiana Tech territory, a blocked punt and a questionable spot on a fourth-and-1 at the Bulldogs’ 2-yard line.

Louisiana Tech used a fumble and blocked punt to score two quick touchdowns and take a 20-7 lead over UNLV after the first quarter.

The Rebels went in front 7-3 with 9:42 left in the period when Nick Sherry threw into triple coverage and somehow completed a 33-yard pass to tight end Taylor Barnhill.

But then came the fumble and blocked punt, which Louisiana Tech turned into two short touchdowns for the 13-point advantage.

The Bulldogs (4-0) average 52 points per game, but they also give up 37 points on average.

Even if the Rebels don’t do much as a team, they can make strides with some individual achievements.

Tim Cornett is 26 yards from moving into 10th on the career rushing list and 126 from ninth. He also needs one touchdown to tie for sixth on the all-time chart.