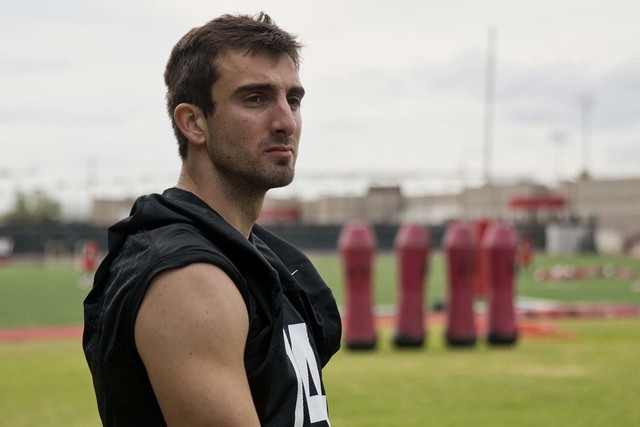 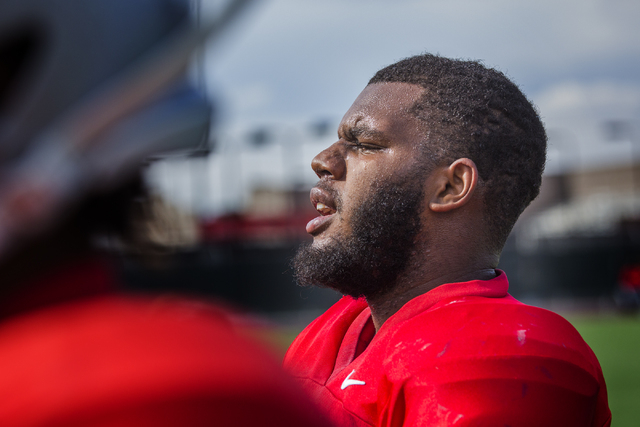 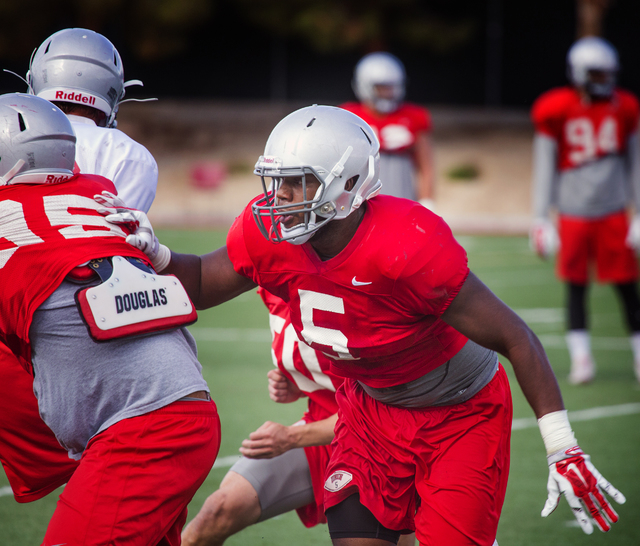 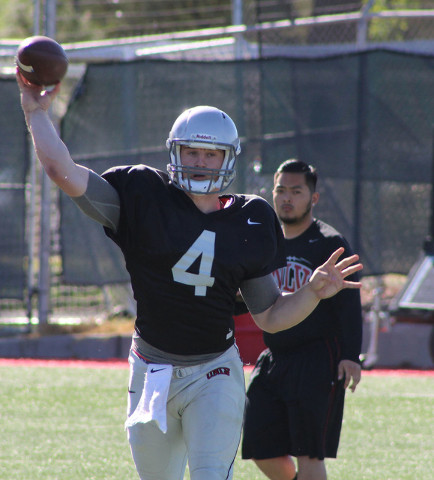 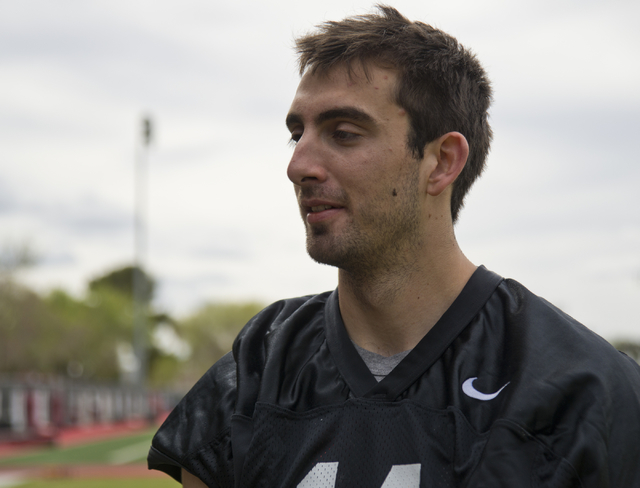 “We’re not rushing it. We’re letting both those guys share the reps,” Sanchez said. “Sometimes we rush things too much in this game and there’s no reason to. We’re going to get them equal reps and make sure they’re both prepared.

“Going into the fall, we’ll make a decision going into Week 1 and go from there.”

The spring game, a free, family-friendly event featuring a 50-minute scrimmage, is scheduled for noon at UNLV’s Johann Memorial Field, located near the intersection of Swenson Avenue and Flamingo Road.

After struggling to get acclimated to a new offense early on, Stanton has hit his stride heading into the Rebels’ 15th and final spring practice.

“I’m much more confident in the offense now that we’re at the end of spring ball. That’s really what my issue was before,” Stanton said. “I’m always sure of my arm strength and my accuracy and of the way I can play. It was really just getting used to the offense.

“I’m ending on a high note. That’s where I wanted to be. I wanted to be splitting the (No.) 1 reps and I’m in a position to be able to win that starting job. But the competition’s not over. I’ve got to keep working at it.”

Quarterbacks have been live targets in every spring scrimmage so far, but will be off limits today.

“Everything else will be full, live go,” Sanchez said. “We’re just going to whistle the quarterbacks.”

Defense has had the edge over the offense in practice. Just ask linebacker Brian Keyes.

“Definitely. I think we’ve got them eight out of 10 times,” he said. “It’s all about flying around, having fun and hitting people.”

Stanton said the offense has finally caught up to the defense and he hopes to help show that today.

“We want to dominate the defense,” he said. “It’s a scrimmage but we’ve got to treat it like it’s a game and play our hardest.

“The spring game is really exciting. It’s the first time you get to go in front of the fans and it’s the most we’ll be able to scrimmage.”

Running back Lexington Thomas and wide receiver Darren Woods Jr. have been among the Rebels’ biggest spring standouts and Sanchez also praised the play of the beefed-up offensive line, including 6-foot-7-inch, 292-pound left tackle Kyle Saxelid, who gained 22 pounds since last season.

“He’s always been a talented guy, but coach (Kent) Baer has done a really good job of teaching him the game and how to do it right,” Sanchez said of Lotulelei. “We’ve seen a huge maturation in him.”

“There’s a lot of guys that showed promise but what all these guys have got to understand is they’ve got to stay humble because none of them have done a darn thing in a game yet,” Sanchez said. “You’ve still got to do it on a Saturday afternoon. When you do that, then you earn your stripes.”

■ NOTE — Former UNLV coach Harvey Hyde will air a special two-hour show from the spring game on a tape-delayed basis from 5 to 7 p.m. today on KSHP-AM (1400).

Where: Johann Memorial Field, located near the intersection of Swenson Avenue and Flamingo Road