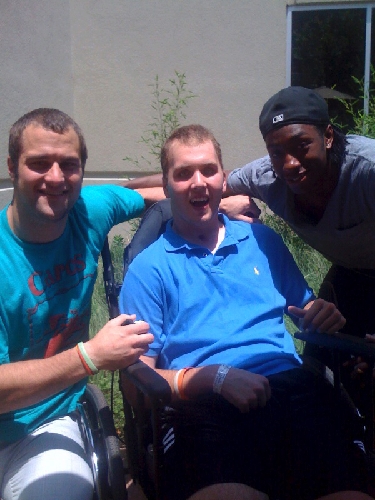 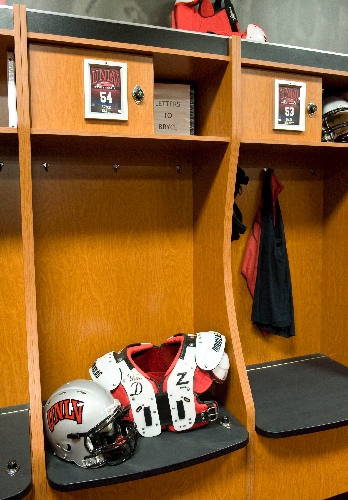 UNLV continues to honor linebacker Bryce Saldi by maintaining his locker at Lied Athletic Complex and including him on the roster.

Saldi suffered a serious brain injury while skateboarding in July 2009 and now spends time between his Dallas-area home and an assisted-living facility. Updates on Saldi’s condition can be found at www.caringbridge.org/visit/brycesaldi/guestbook.

Quarterback Omar Clayton and tight end Austin Harrington visited Saldi earlier this year and recently spoke to the Review-Journal about their experiences.

Clayton
1. How has Bryce’s injury affected you?

2. Can you put into words your feelings when you first saw Bryce?

After the first five or 10 minutes, I got over it. At first, it was a shocker. It was really good to see Bryce. Me and Austin sat with him and talked to him a little bit. We sat with him while he ate his lunch outside. Then me and Austin started playing music on his iPod, and it was awesome because it would be songs that he used to love. He would hear them, and he would go crazy. So it was real powerful. I’m really glad that I took the time to go over to the hospital. … Even if he’s not the same Bryce he was before, he knows there are people that still care about him, and we didn’t forget about him. We still love Bryce Saldi. Fifty-four will always be 54.

3. What kind of music did you play when you were there?

We played a little bit of Lil Wayne that he liked before he got hurt. We played a couple of songs, a little Texas rap. The one he liked the most was “Swag Surfin.”

4. Did you THINK you made a real connection with him?

I did, and the best part of the whole thing was it took him a second because right off the bat he recognized Austin’s mom and he recognized Austin, and he hadn’t seen me since before (the accident) happened. He looked at me, and his eyes just lit up. It was really good. Even though things have changed and he is in a certain condition right now, he still recognized me. He was happy that we came and visited, and it was great to see his eyes light up.

Harrington
5. Have you noticed improvement in BRYCE’S condition?

I go see Bryce just about every time I go home. Every time I see him, it’s the best he’s looked. Bryce was very excited to see both of us, especially Omar. It’s the first time Omar had gotten to visit him. I saw Bryce’s face light up bigger than I had ever seen before.

6. What do you remember most about your visits?

Bryce ate two barbecue sandwiches, a chicken pot pie, these fruit cups, just cleaned his tray. He had a better appetite than I do. It amazed me. He’s put all his body weight back on. He still goes back to the assisted-living place in the evening. I visited him at home. He’s just sitting in his living room wearing his casual street clothes — jeans and a T-shirt, his hat, his sunglasses. He was watching some Texas Rangers baseball. It was nice to see him like that because he had looked the most comfortable I had ever seen him since the accident.

7. Do you get a sense of how he’s eventually going to be?

It wouldn’t be fair for me to say. The best part about it is every time it’s an improvement. It’s always two steps forward, one step back. He’s always doing something he hasn’t done before. They said he wouldn’t be able to speak, and he said “mom” earlier this summer. He can move around a little bit. It’s always safer to have people there assisting him, but if he wants to, he can get up and walk around. He can answer the telephone. He can play on his computer. He can pull up a song on iTunes.

8. Does he understand what’s going on with UNLV football?

I definitely tell him what’s going on. I know his family communicates what’s going on. As far as who’s the starting safety, I don’t know if he knows that. But he knows that we have a new coach. Coach (Bobby) Hauck wrote him a letter. He didn’t know anything about Bryce. He took the initiative to do that. I know the Saldis appreciated that.

9. Is there a locker for BRYCE?

His stuff is in there. There’s a binder and it says, “Letters to Bryce.” If anybody wants to give him a shout, they can write something and put it in there. Sara (Swanson, football program director) will make sure he gets it. … I know this whole team misses him.

10. What impact would Bryce have on this year’s team if he was able to play?

There’s no doubt that we could use him out there. He is a very, very strong, fast, athletic linebacker. Any team could use that. We all miss him a lot. It’s crazy how much time has gone by since it happened, but we don’t forget him.