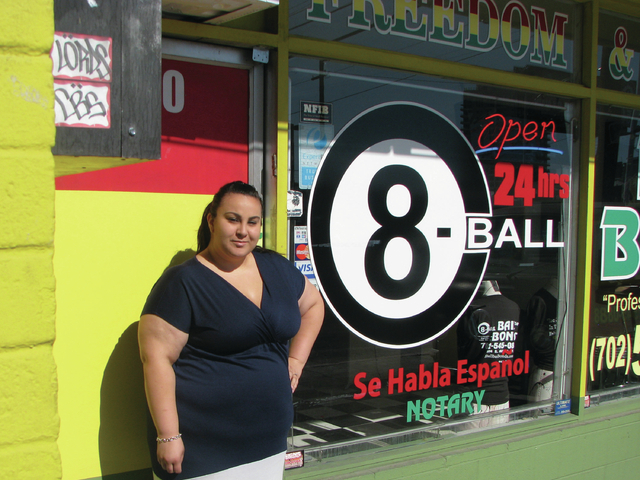 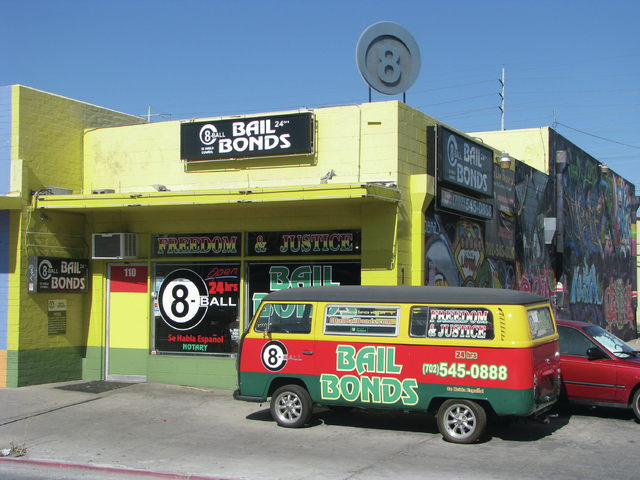 The decor of 8-Ball Bail Bonds, 1114 S. Main St. is designed to draw the eye. Much of the building's look were inspired by the owner's visit to Jamaica. (F. Andrew Taylor/View) 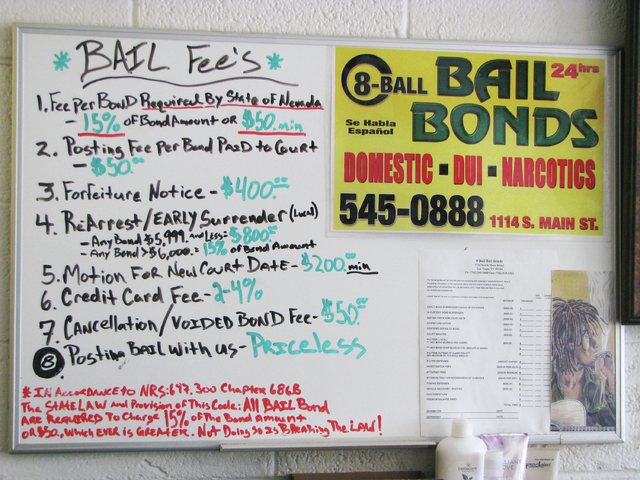 8-Ball Bail Bonds, 1114 S. Main St., like all Nevada bail bond companies, is required by law to charge 15 percent of the bail amount or $50, whichever is greater. A sign behind office manager Alyssa Pamplona explains the fees. (F. Andrew Taylor/View)

All those things that make bail bond companies seem garish and hard to miss are doing what they were intended to: make the business stand out.

“The law requires them to offer basically the same services, so they need a way to stand out,” said local attorney Dayvid Figler. “They rely on visibility or word of mouth to bring clients in, and the neon and funny names help make them stand out and be memorable.”

California-based Eric Granof is the chief marketer for the ExpertBail Network and vice president of corporate communication for AIA, an association of surety bail professionals. He describes the network as a combination of the Good Housekeeping Seal and the Better Business Bureau. He spends a lot of time trying to dispel the popular image of bail bond companies.

“The way Hollywood portrays it, the only difference between a bail agent and a criminal is which side of the bars he’s on,” he said. “The reality is that bail agents are insurance agents, ensuring that someone is going to show up in court.”

The rules and percentages vary from state to state, but the basic principles are the same. A bail bond company fronts the bail money for someone who can’t otherwise afford it. The courts gain another entity ensuring the defendant appears in court, gets out of custody until the trial and that the bail bond company receives a percentage of the bail as a fee. In Nevada, bail bond companies receive 15 percent of the cost of the bail, plus administrative fees.

“If you don’t show up for court, the bail agent will remind you, come get you and make sure you do show up,” Granof said “Bail agents are very good at making sure they have the information to find you.”

Despite what happens on reality shows, bounty hunters enter into the picture only a fraction of the time. Usually, a bail agent can accomplish what he needs to with a phone call to the defendant or the person who arranged the bail.

“We don’t write bail for anyone,” said Alyssa Pamplona, office manager of 8-Ball Bail Bonds, 1114 S. Main St. “I’m not going to do a bond for $5,000 for someone who’s unemployed. If they miss court, then they don’t have any funds to collect.”

She said that typically, the company deals with the defendant’s loved ones, who end up being the people who would be left owing the money should a defendant skip.

Regardless of the outcome of the trial, once the case is settled, the bail is returned to the person or company that posted it for the defendant.

“A lot of the time, the defendant doesn’t have the kind of money needed for bail, so a bail bond company is their only option,” Figler said. “I always tell people that if they can afford the bail, to pay it themselves. I’m amazed at people who have bail set at $300 and go right to a bail bond.”