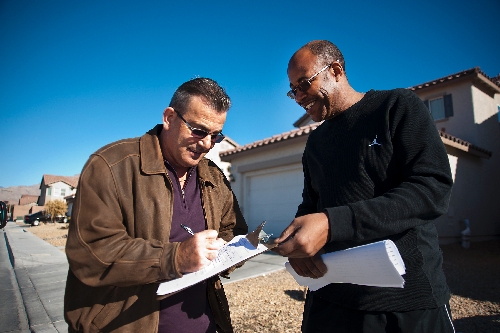 Come Jan. 31, it will be up to Ward 6 voters whether incumbent Councilman Steve Ross keeps his title or challenger Byron Goynes will get a chance to “Fix ‘6’ ” in the recall election for the disputed Las Vegas City Council seat.

Early voting is slated to take place Jan. 26-27, and the city’s special recall election is to follow Jan. 31, which is within 50 days since local and state elections officials certified a petition forcing the recall.

Petitioners from the Committee to Recall Steve Ross attempted twice last year — once successfully — to gather the state-required 1,083 signatures needed. The first attempt in August fell short by about 25 signatures. The group was successful in late December. Ross didn’t challenge the petitions.

The recall organizers’ platform against Ross involves issues such as a dispute with car dealer Joe Scala and allegations that Ross accepted a Las Vegas City Council pay raise after promising to reject it.

Ross, who is in his second term on the council and is up for re-election next year, said the group had a personal vendetta against him and used harassment, “half-truths” and “innuendos” to persuade voters to sign petitions.

“The people who gathered the signatures weren’t residents of the northwest and were paid to smear my name and mislead voters,” he said. “There is now a level of, ‘Let’s get this on.’ I’m ready.”

Scala sought a waiver to sell upscale used cars in an auto mall that requires dealers to have an affiliation with a manufacturer to sell new vehicles but was denied.

Ross said he worked with Scala but the “unscrupulous businessman” wanted a sweetheart deal. Scala alleged that Ross would have supported the waiver if it came with a campaign contribution.

In the days leading up to the recall election, Ross said he intended to “treat it as a regular campaign” with mailers, post signs and knock on doors.

“I’m very engaged in the northwest, and this is an opportunity to become more engaged,” he said. “This is the only way I know how to do it. It is to play fair.”

Although some have shown interest, only one challenger has confirmed that he’ll run against the councilman .

Goynes has spent 27 of his 49 years in Las Vegas living in Ward 6, and he said the area provided a great place to raise his son and daughter.

“It’s been a community I’ve been able to raise my children without much worry of gang violence or unwanted things in the neighborhood,” he said.

He’s seen a change in values from the leadership, he said.

“The current administration out there is not listening to residents,” he said. “I’ve always been one that listens to the residents.”

Goynes said he planned to run for the council seat in 2013 but the recall election “opened up the opportunity a little earlier.”

“What really spurred me to get into this race was the fact that the recall group did the recall petition and it was rejected and what was impactive is that this group went out a second time and were able to garnish the votes again,” he said. “That was an indication to me that something was wrong in (Ward) 6.”

Goynes said he isn’t affiliated with the Committee to Recall Steve Ross and “wouldn’t know Joe Scala from Adam.”

If elected, Goynes, who works full-time as an employment liaison for Nevada Workforce Connections, said he plans to focus on bringing new businesses and jobs to Centennial Hills. His other platforms include revamping current zoning codes, improving foreclosure rates and youth development.

“We have to provide outlets,” he said.

He cited a recent murder at a Centennial Hills skate park as reason to focus on youth issues.

“That tells me the idle mind is the devil’s workshop,” he said. “We have to be more attentive to the issues. I can’t believe the current representative isn’t. You have someone not paying attention and asleep at the wheel.”

Goynes’ campaign motto is “Fix ‘6,’ ” and he, too, is campaigning door-to-door and meeting voters prior to the Jan. 31 vote.

“I want residents to know I’m passionate, I’m a good listener,” he said. “It’s their ward. It’s our ward. I’m definitely there to fix 6 .
Now, it’s up to those casting the ballots.

“I’m very confident in the voters in Ward 6.”