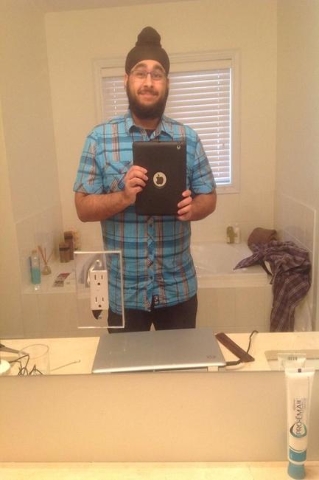 Portland, OR — A Canadian Sikh man is speaking out on Twitter after a photoshopped image of him appeared online, making it seem as though he was involved in the Paris terror attacks.

Veerender Jubbal originally posted a photo on Aug. 5, standing in front of his bathroom mirror holding an iPad as he got ready for a date.
At some point, someone edited the photo, replacing the iPad with a Quran and putting a bomb vest over his shirt.

According to Mashable, the photo quickly made the rounds online and even showed up up the Twitter feeds of international news organizations, which portrayed him as one of the terrorists who carried out the attacks.
Jubbal said on Twitter that not only has he never been to Paris, but he is Sikh, not Muslim.
It’s just one of several examples of falsified stories that quickly spread online in the wake of Friday’s attacks.

The University of Missouri released an official statement pointing out that online posts allegedly complaining that the terror attacks diverted attention away from campus protests were in fact fake.