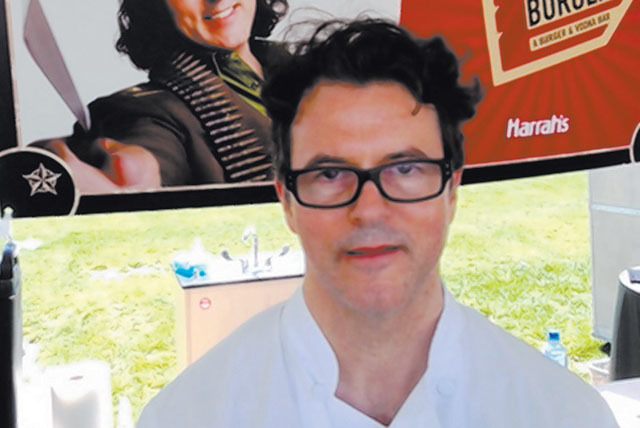 L as Vegas chef  Kerry Simon  went public Thursday with the news: After four-plus years of medical tests he recently learned he has an aggressive form of Parkinson’s disease.

As recently as June, doctors thought the “Iron Chef” episode winner, 58, was suffering from mercury poisoning as a result of his love of sushi.

“Everything went nuts there for a while” — his energy plunged, his pain shot up, his balance was out of whack, he said.

“I was wishing for Parkinson’s alone. The better of the two (evils),” said Simon, who has built a restaurant empire across the country.

After seeing medical specialists at the Lou Ruvo Cleveland Clinic, Cedars-Sinai in Los Angeles and the Mayo Clinic in Phoenix, the diagnosis came down a month ago: Simon has multiple system atrophy (MSA), a rare and severe form of Parkinson’s. He went from needing a cane to a walker and then, last week, a wheelchair.

He is being honored tonight at The Venetian, along with legendary New York restaurateur Sirio Maccioni, at the Silver State Awards sponsored by the Nevada Restaurant Association.

As emotional as they are, nothing prepared him for what happened in October.

A U.S. soldier who had attended Fator’s 2011 Salute the Troops show had emailed that he couldn’t attend the November tribute. The veteran said he would be in Las Vegas in October and wanted to know if he could propose during Fator’s show?

“She was his nurse and they had fallen in love while she was nursing him back to life,” Fator recalled.

Of course, said Fator, who put the wheelchair-bound veteran, John, and his girlfriend, Stacey, on the front row.

At the appointed time during the show, Fator joined the couple below the front of the stage.

Fator included John in a hilarious bit that includes a mic’d-up dummy mask. When it was over, Fator said to John, “I understand you have something you want to say.”

John, who had lost his arms and legs in a blast by an improvised explosive device, turned to Stacey and said, “‘I’m sorry I can’t get on one knee,’ ” Fator said, “and the crowd just gasped.”

“He had an artificial hand and the ring was hidden in the hand and he said, ‘I can’t open my hand, but I have something in there for you’ and she reached in and took it and everyone in the audience was crying.

“It was by far the most spectacular and moving and amazing moment in the history of the show,” said Fator, who is featured in today’s Q-and-A, available at reviewjournal.com.

At the National Final Rodeo at the Thomas and Mack Arena on Thursday: Caesars Palace headliner Shania Twain and former Republican vice presidential candidate Sarah Palin. Earlier Twain was spotted at Carmine’s having lunch. … At Hash House A Go Go at the Quad on Tuesday: retired NBA stars Rick Barry, Spencer Haywood, Thurl Bailey and Otis Birdsong. … Country star Neal McCoy, singing the national anthem at the NFR on Wednesday and staying for the action; also there: Olivia Newton-John and several members of the Western Governors’ Association.