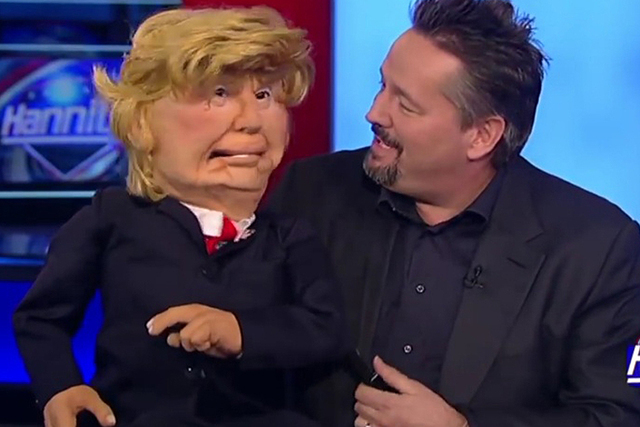 Screenshot of Mirage headliner and Trump endorser Terry Fator as he showed his new Donald Trump puppet on Fox News, May 26, 2016.

Not everybody in showbiz hates, is panicked by, or LOLs nonstop at Donald Trump, because Mirage resort headliner Terry Fator just became the best-selling Strip headliner to go public with his enthusiastic endorsement of the presumptive GOP presidential nominee.

The Las Vegas singing ventriloquist returned to Fox “News” on Thursday to show perceived-propagandistSean Hannity his new Trump puppet, which sang the chorus of “Another Brick in the (Mexico) Wall.”

“I’m a huge Trump fan,” Fator told Hannity when inquired. “My wife and I, we love him, we’re gonna vote for him, we think he’s great.”

Fator will not be doing anything derogatory with the Trump puppet, although he made his puppet’s hair pop up as if it weren’t attached to his head.

I reached Fator, Mr. “$100 million Vegas contract,” by phone on Saturday while he and wife Angie Fiore were cozying with friends and family of different political persuasions at lavish Cape Cod, dining on shrimp and champagne at sunset.

“We’ve got some Trump steaks,” Fator joked, and no one in his fancy party was talking politics, “but we just started drinking, so that might change.”

I’m not here to shame Fator. I like it when everyone speaks up. I was wondering if Fator thought his endorsement would change the flavor of his show, since Trump’s so unpopular in polls.

Fator, in a terrific mood, stressed he will not proselytize politics onstage.

“In my show, you will never know who I am for,” Fator, whose show is otherwise quite apolitical, said.

He might add Hillary Clinton and Bernie Sanders puppets for jokes that would be just as “benign” for all audiences as is his Trump material, he said.

As a comedian, he likes that Trump is not “politically correct” and doesn’t issue apologies.

Asked if he has winced at things Trump has said, he answered “of course,” but added that all politicians make him wince.

“Believe me, Angie and I don’t agree with everything he says,” Fator said.

Also, Fator said comics will have a field day if Trump wins, “because the material is going to write itself.”

The only other bold-name-on-the-marquee Trump endorser in Vegas entertainment, it’s believed, is iconic Wayne Newton, who is playing Bally’s.

In Saturday’s RJ, I wrote about how Glitter Gulch manager Rudy Nino used to drive to the Tip Top with its “roller girls” in the early 1960s, but avid reader and 1956-onward local Mike Moody tells me they didn’t have roller girls at the Tip Top.

How does Moody know?

“My mom soon went to work at Sills Drive Inn, which became the Tip Top,” after the family moved here from Delta, Utah, in a Studebaker “and my uncle’s cattle truck,” Moody says.

“She worked there as a car hop for almost a decade and they never wore roller skates,” he says.

My buddy Norm Clarke is taking some days off. He’ll be back, don’t worry, dear lady who wrote me an angry email on Friday telling me to bring Norm back. Yes, I know Norm is beloved. He’s my friend. He is beloved among me, too. Just hold your horses. I’m only filling in. Cut some hard workers a break already.

Oh, wait. Norm just sent me this to share with you:

“To my readers: I value my relationship with all of you and wanted to let you know I’m taking some time to focus on my health. My doctors are advising me to get some rest. I’m in good hands medically and I thank my friend and colleague, Doug Elfman, for doing double duty. Hope to you see back here very soon.”

If you’re into DJ Khaled, you can see him receive a “major key” to the Las Vegas Strip at 1:30 p.m. Sunday at Doge’s Palace in The Venetian hotel (1 p.m. red carpet).

“Major key” is a play off of the DJ’s new album of the same name. He performs in Vegas regularly. He was scheduled to DJ Saturday night at Tao nightclub in The Venetian.

But Khaled, 40, is mostly famous among people who use Snapchat (the photo/video-sharing app) and among entertainment media that treats his sort of self-satirical Snapchat “keys” to success, such as eating Cinnamon Toast Crunch with almond milk, as if he were a motivational guru, because the media is dumb, including me sometimes.

However, I’m just a hater, because who is this guy to get a key to the Strip before me and you? Oh right, I wouldn’t draw a crowd at a key ceremony.

OK, Khloe and Kourtney Kardashian, you win, I’ll write about you today in my capacity as a joyful jester in this court of cards.

Ever since you two have broken away from your male TV cast mates Scott Disick and Lamar Odom, you’ve been coming to Vegas.

You both showed up at Disick’s paid hosting/birthday-cake gig at 1 Oak nightclub in The Mirage on Friday night with Khloe in a hot pink latex dress, even though co-stars Kourtney and Scott are no longer a TV couple.

Then, Khloe, you left 1 Oak and showed up at Drai’s nightclub, where pop music rapper The Future performed “Where Ya At,” “Low Life” and the comically titled “F**K Up Some Commas.”

You and Malika from your show weren’t alone in your celebrityness at Drai’s. Houston Rockets Shooting guard James Harden was at Drai’s. Floyd Mayweather was in attendance, as were rapper Tyga and Denver Broncos linebacker Von Miller.

After that, you, Khloe, hopped on a plane and left town.

Both of you Kardashian sisters were here only last weekend, eating avocado toast at Beauty & Essex, watching Jennifer Lopez at Planet Hollywood, and partying at Drai’s.

You two are a couple of party animals. Or, possibly, you are just getting away from Odom? Or, you’re picking up appearance checks? I should care more about finding the answers to these questions. Alas, I don’t.

Harrah’s headliners Bill Medley and Bucky Heard of The Righteous Brothers got onstage at the “Frankie Moreno — Under the Influence” show at Planet Hollywood on Friday, to perform signature high “Unchained Melody” with Moreno and his vintage homage band.