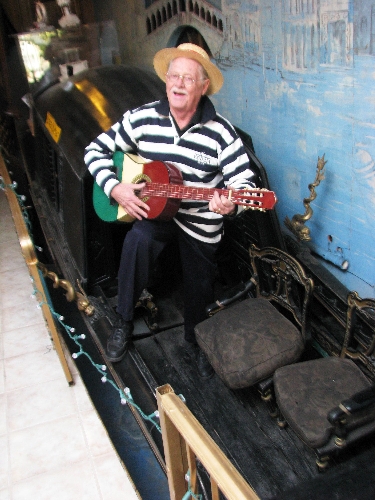 Many people have an old boat at their house that they’re thinking of selling. However, when that old boat is a 36-foot Venetian gondola that may be the oldest in the world and the asking price is $1 million, it’s something to talk about.

Dr. Lonnie Hammargren, retired brain surgeon, former Nevada lieutenant governor and current full-time eccentric collector, purchased the gondola more than 30 years ago from a museum in Reno. At the time, his home was merely a little quirky . It hadn’t transformed into the collection of oddities crammed into every space in three homes that it is today. It already had the planetarium and was a regular meeting place of the Las Vegas Astronomical Society.

“(The gondola) arrived on a semi on a night we were having a meeting,” Hammargren said. “It was going to take a while to get a forklift out here and we had 20 or 30 people at the meeting, so we just hauled it over and put it beside the house.”

At the time, a railroad track encircled the yard and the gondola was placed near the train station. Eventually Hammargren expanded the house over the gondola, building a room featuring giant windows from a demolished casino. He didn’t put the gondola in the house; he put the house around the gondola.

Hammargren purchased the boat from the Harrah’s collection. Much of that collection has become the National Automobile Museum in Reno. The gondola came with a sign, which hangs next to it still, that identified it as an 1815 Venetian gondola.

If that date is correct, Hammargren’s gondola is easily the oldest in the world. The current confirmed holder of that title is on display at the Mariners’ Museum in Newport News, Va., and dates to the mid-1800s.

“Most gondolas don’t make it past 20 or 25 years,” said Greg Mohr, president of the Gondola Society of America. “Most of the oldest ones aren’t in Venice. When a gondola is brought somewhere else, it becomes exotic, and it gets preserved. In Venice, when a gondola gets old, you just buy a new one.”

In addition to his work heading the gondola society, Mohr also runs three gondola operations in the United States — one in Irving, Texas, another at his home base in Newport Beach, Calif., and the third at Lake Las Vegas in Henderson.

“I saw (Hammargren’s) gondola two or three years ago, and it is amazing.” Mohr said. “It’s a wedding gondola, the kind of gondola with the highest level of trim. They’re the gondola a Venetian hires to take them to and from their wedding.”

Mohr said it’s difficult to pinpoint the age of a gondola. A gondolier knows which boat is his, but it would be difficult for anyone else to pick it out of a line up.

“I believe it could be the oldest gondola in the world,” Mohr said, “but I doubt it.”

Mohr has a basic reason for his doubt. Hammargren’s boat is asymmetric.

Early gondolas, like nearly every other water vessel in the world, were symmetrical, Mohr explained. Around 1850, a gondola builder named Domenico Tramontin was commissioned to build an asymmetric boat, and to the surprise of nearly everyone, it proved easier to control. After that time, all gondolas were built asymmetrically.

Prior to this period, gondolas were always operated by two gondoliers, a master rowing in the back and an apprentice rowing in the front. The master learned special strokes to compensate for the shortcomings of an apprentice and keep the boat moving straight forward.

Venice was going through challenging economic times around 1850, and the redesign allowed the gondolas to be operated by one gondolier more easily. Hammargren’s gondola has places for two gondoliers but is asymmetrical.

The room the gondola sits in has been partially transformed into a chapel, with a reproduction of the Sistine Chapel ceiling, a confessional box and an altar. Hammargren’s wife, Sandy, suggested to him that without the gondola, the room might be able to become a wedding chapel.

“Sandy and I were looking around the house and realized that the gondola was one of the more valuable things in it,” Hammargren said. “It takes up a lot of room, and it’s hard to see all of it well. It would be better off somewhere you could see it better.”

With two locations in the valley offering the unusual treat of a gondola ride in the Mojave Desert, Hammargren hopes that someone might be interested in purchasing the gondola as a display piece. Mohr declined to purchase it three years ago.

“I don’t think Hammargren is ever going to get the money he wants for that boat,” Mohr said. “There are a whole lot of gondola operators in the world that wouldn’t be interested in it if wouldn’t float.”

Hammargren’s gondola has been in the desert for the entire time he has owned it and its previous tenure in Reno. The environment has not done anything to improve the boat’s seaworthiness.

“I don’t bring wood boats into Las Vegas,” Mohr said. “The environment with the low humidity is death for wood.”

The gondola does have an unusual feature that Mohr thinks might make the difference for a buyer — a felze, a removable cabin with doors and windows fitted with Venetian blinds. Felzes come from a time when gondolas were more utilitarian and not used primarily by tourists. They provided shelter and privacy. They are not used much today because they obscure the view.