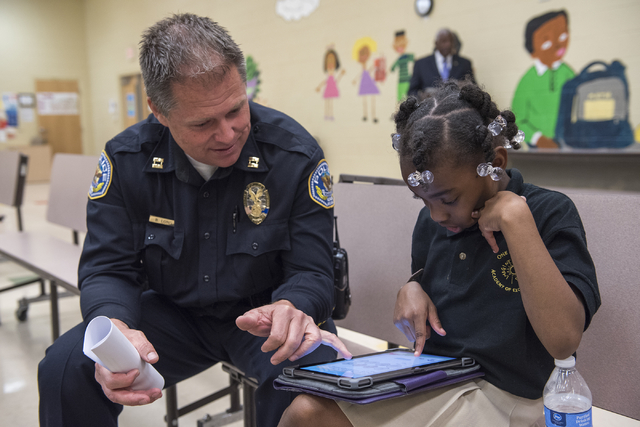 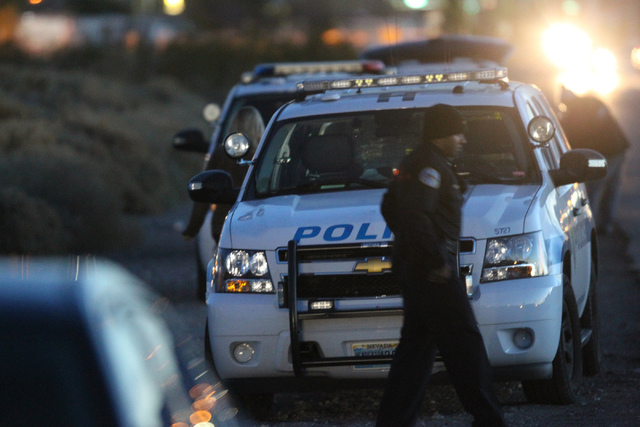 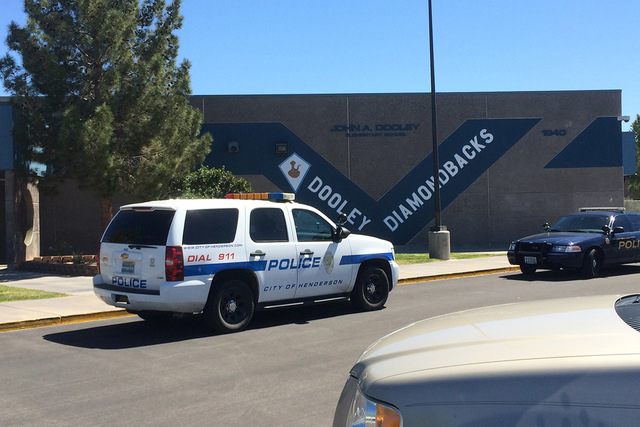 Dooley Elementary School in Henderson has been placed on lockdown after a report of gunshots fired nearby, police said. (Bizu Tesfaye/Las Vegas Review-Journal) Follow Bizua Tesfaye on Twitter @bizutesfaye 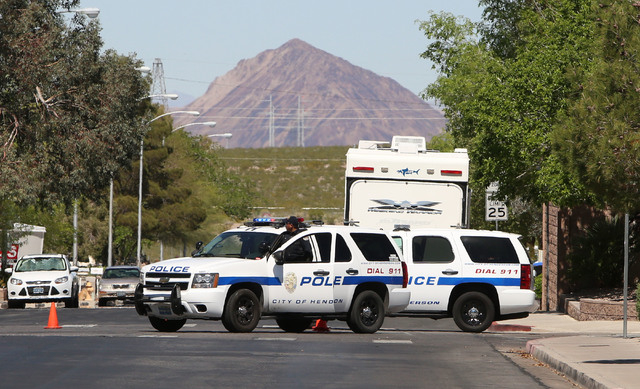 A Henderson police officer is seen outside Dooley Elementary School, 1940 Chickasaw Drive, in Henderson on Friday, March 27, 2015. The school was placed on lockdown after a report of gunshots fired nearby, police said. (Bizuayehu Tesfaye/Las Vegas Review-Journal) Follow Bizua Tesfaye on Twitter @bizutesfaye 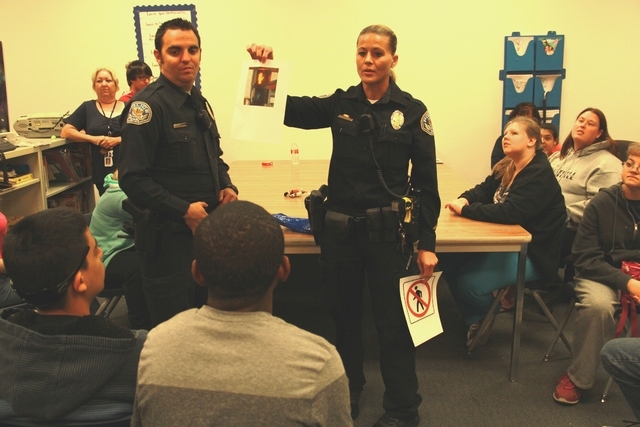 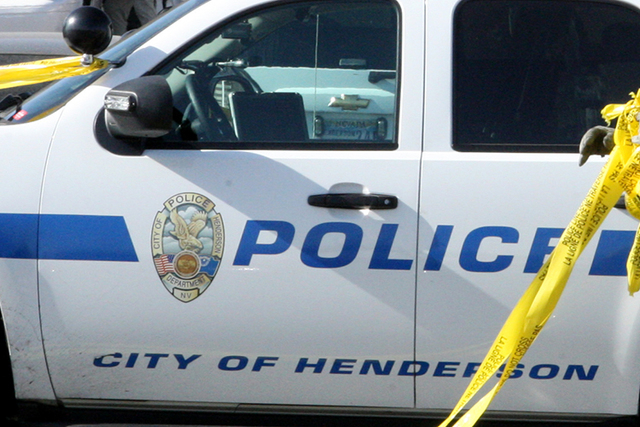 In the last part of a four-part series, Henderson View explores various city departments and resources that contribute to the community’s overall safety and Henderson’s listing as one of the safest cities.

The Henderson Police Department was formed in 1953 after the city was incorporated. As of September 2014, there are 336 sworn officers serving the community.

“The men and women of our (police department) work very hard to keep our community safe,” said Mayor Andy Hafen. “They continually seek innovative interagency and community programs and are always on the forefront of new methods and technology to preserve life, solve crimes and protect our community.”

The department consists of several divisions, including patrol, traffic, K-9 and SWAT.

Patrol officers typically are the first to respond to emergencies whereas the traffic bureau aims to reduce the number of accidents on the roadways through traffic enforcement, targeting impaired drivers and patrolling parks and trails.

SWAT and the K-9 units are considered special services used to handle high-risk search warrants, stand-offs and hostage situations and search for suspects and evidence, respectively.

Although police officers are assigned to a specific division, Officer Scott Williams said most are cross-trained in investigations.

“A patrol officer that comes out to take your burglary report will most likely follow that report from beginning to end, whether we arrest a suspect or run out of leads and close it,” he said. “Having the ability to see a case through helps because things don’t get missed or slip through the cracks.”

In addition, Williams credits the help of residents who police their own community and call when they see something suspicious.

“We actually want residents to call because they empower the police department,” he said. “They can call 311 instead of 911 if they’re not sure. It’s just so much easier to follow up on something that turns out to be nothing than have it become something and not know about it.”

“We pride ourselves on that because it’s working our partnership with the community,” he said. “That’s what keeps us safe, and we don’t ever want to compromise that.”

The city is set to accept online applications for police officer and corrections officer positions until 5:30 p.m. July 10.

One service is the Crime Prevention Through Environmental Design program, which surveys the interior and exterior of homes and businesses and recommends improvements to reduce the likelihood of crime.

“Criminals like to prey on soft targets. They want the path of least resistance,” Williams said. “What we try to do is help people make their homes (and businesses) a little harder of a target and make it more of a deterrent for criminals.”

While checking the exterior, certified officers examine the landscaping, lighting and door and window locks.

“Lighting is the No. 1 deterrent for nighttime crime,” Williams said. “Criminals like to act under that cloak of darkness. They like to be hidden.”

Williams recommends that bushes and hedges be trimmed down to 2 or 3 feet and trees be trimmed up to 6 or 7 feet.

To help prevent front door kick-ins, Williams said residents should replace the three-quarter-inch screws in the door’s strike plate with 3- to 4-inch screws. The larger screw will secure the plate into the home’s wooden door frame.

“These recommendations don’t interfere with emergency services because we all have the tools to still get inside,” Williams said. “It might take us a couple of hits, but that’s OK. We’d rather have that than the alternative where a criminal can get in easily.”

Once inside, Williams said criminals typically look for valuables small enough to fit inside a backpack, such as jewelry, small electronics, guns and prescription pills.

He advises residents to invest in diversion safes that look like common household products and write down serial numbers to valuables. If items don’t have serial numbers, individuals can inscribe an owner applied number or logo.

“(The city of) Henderson and about 98 percent of pawn shops use a service called LeadsOnline,” Williams said. “If someone pawns an item, its serial number is ran through the system, and if it’s stolen, we’re able to track them down.”

Additional community services include D.R.E.A.M.S., an educational program that encourages fifth-graders to make positive choices; Every 15 Minutes, an educational event that shows high school students the dangers of driving while impaired; and personal safety and security for seniors and women.

“We want to be proactive educators and letting the public know how to be safe and protect themselves,” Williams said. “It helps people learn how to take care of themselves rather than just being reactive.”

They say you never know what someone’s life is like until you walk a mile in their shoes.

Through the Henderson Police Department’s Citizens Academy, residents can gain insight into the life and training of a city police officer.

The 13-week program is offered three times a year and covers topics such as use of force, gang enforcement, crime scene investigations, domestic violence, community policing and more.

In addition to lectures, the program includes K-9 and taser demonstrations, a jail tour and a firearm safety class at a gun range.

A retired police captain, Henderson resident Jack Klaric said he took the course to keep his foot in the door of law enforcement.

“I would recommend the academy to anyone that has an interest of seeing the inner workings of a police department,” he said. “I’ve seen nothing but ethics and professionalism from these people, and that was always huge for me when I worked in law enforcement. If you take an oath for something, you better live by it, or what good are you?”

Klaric said the police department contributes to Henderson’s safety not only by responding to crimes and violence but also by taking preventative measures.

“If you let things go, Henderson will become more like Vegas, so we need to keep a lid on things,” he said. “If you’re proud of your community and its police department, it will show. A community will grow if people feel it’s a safe place.”

The next academy is set to start in the fall. Participants must work or live in Henderson, be at least 18 and have no misdemeanor, gross misdemeanor or felony convictions.

Editor’s note: To read past stories of this series, visit viewnews.com.