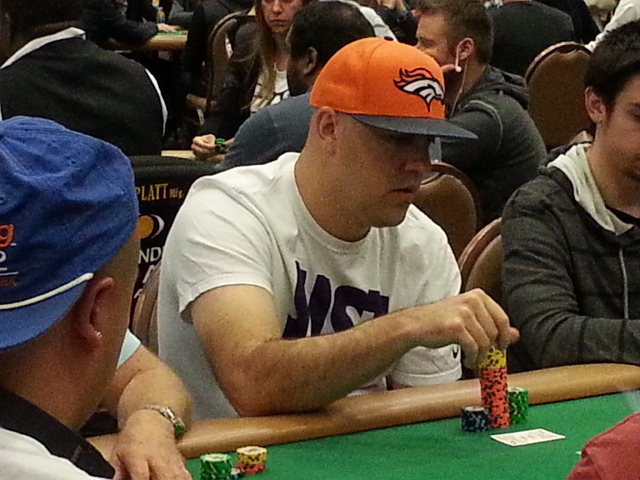 Craig Varnell of Fort Collins, Colo., was unofficially in the top 10 in chips at the completion of Day 1C of the World Series of Poker’s $10,000 buy-in No-limit Texas Hold ’em World Championship at the Rio Convention Center. (David Schoen/Las Vegas Review-Journal)

John Gorsuch of Belle Glade, Fla., finished as the chip leader at the end of a record-setting Day 1C of the World Series of Poker’s $10,000 buy-in No-limit Texas Hold ’em World Championship.

Gorsuch unofficially bagged 198,100 chips when played stopped early Wednesday at the Rio Convention Center and has the overall lead after the completion of the three Main Event starting flights.

The Main Event has prize pool of $60,348,000 and the winner will receive $7.68 million, organizers announced late Tuesday. Each member of the “November Nine” final table will earn a seven-figure payout, with ninth place worth $1,001,020.

Zarik Megerdichian of La Canada, Calif., ended play second with 180,400 chips and was near the lead for most of the evening. Megerdichian was seated at a star-studded table in the Pavilion Room as he was joined by 14-time bracelet winner Phil Hellmuth, 10-time bracelet winner Phil Ivey and top professional poker players Keith Lehr and Melanie Weisner.

Hellmuth unofficially had 79,275 chips at the end of the action, while Las Vegas resident and all-time leading money winner Daniel Negreanu had 73,825 chips.

Also among the leaders were Wade Townsend (146,000), a two-time first-round pick in the Major League Baseball draft, and Craig Varnell of Fort Collins, Colo. (140,750), who finished third in the inaugural WSOP.com online bracelet event.