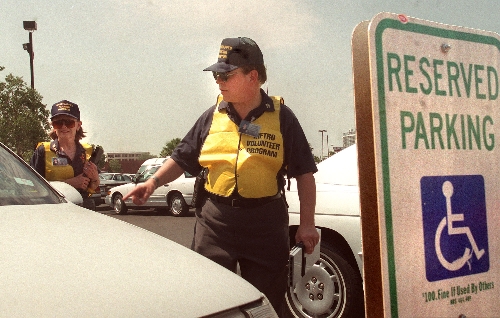 It happens every day — perfectly capable drivers jumping out of cars they just parked in handicap-only spaces.

Cheryl Trafford is newly transplanted from Washington state. She was aghast at how often she sees it happening in Las Vegas.

"Where I lived before, you got the evil eye for doing that. People would say something to you," she said. "Not here."

Harvey Resnik is a retired judge from New York s tate. He said he often saw handicap-parking violators in his court room and gave them a harsh sentence.

"Of course, it was kind of hard to justify hanging for a parking violation," he joked. "Actually, I had little sympathy for them … they’d say, ‘I was only there 10 minutes.’ But people don’t understand. By occupying the spot, they’re depriving the people who have the (right) to use it."

In Las Vegas, the Metropolitan Police Department has the authority to ticket such violators, but officers’ time is taken up with other duties. So the task falls to the volunteers of the Parking Enforcement Unit.

It’s headed by Sharon Harding, who said abuse of handicap-parking spaces is a "pretty serious problem."

Members of the 90-strong volunteer force works in four-hour shifts after logging on with dispatch. They drive the department’s cars but walk the parking lots so they can circle a vehicle, looking for the handicap permit tag to note its expiration date. About 75 percent of the volunteers are retirees.

"And many of them are handicapped themselves, so it’s a real passion for them," Harding said.

The Nevada Department of Motor Vehicles issues special license plates to residents who are permanently handicapped. It issues permits for those with temporary handicaps, such as people with broken legs or who are recovering from surgery.

Harding said even people who are legally issued the plates and placards will abuse the privilege, using them past their expiration date.

"Sometimes, the person will die and their relatives continue to use it," she said. "I’ve even seen it where they’ve auctioned it off at some kind of party."

If the police department volunteer can’t see the expiration date on the temporary placard, a citation is issued. It can be removed if the motorist proves the special use tag is legal.

Similarly, if a person drives off before the citation can be written up, the violation will be attached to the vehicle’s plate number — something the volunteers are trained to take down as they approach. The next time that vehicle’s registration is up for renewal, the citation charge will be collected.

Keith Paul, spokesman for the Henderson Police Department, said it has 10 volunteers in its handicap parking patrol, something that was implemented in 2007.

"There’s a reason they have handicap (permits): because they need additional room, especially if they have a wheelchair," said Paul. "An able-bodied person should not be taking that space."

Citations within the city of Las Vegas limits are $250. Clark County citations are $353. Henderson’s citation is $352.

Either way, the money from citations goes into the state’s coffers.

The c ity of Las Vegas also tickets vehicles that are illegally parked in handicap spots downtown. The city allows vehicles with a handicap placard to park for four hours for free at parking meters, a long-standing practice.

A handicap-parking volunteer spoke of his duties at the police department’s budget open house in November .

"Once in a while, they’ll come out to their car, find me writing a ticket and get mad," he said. "But I’ll have a crowd all around me, cheering."